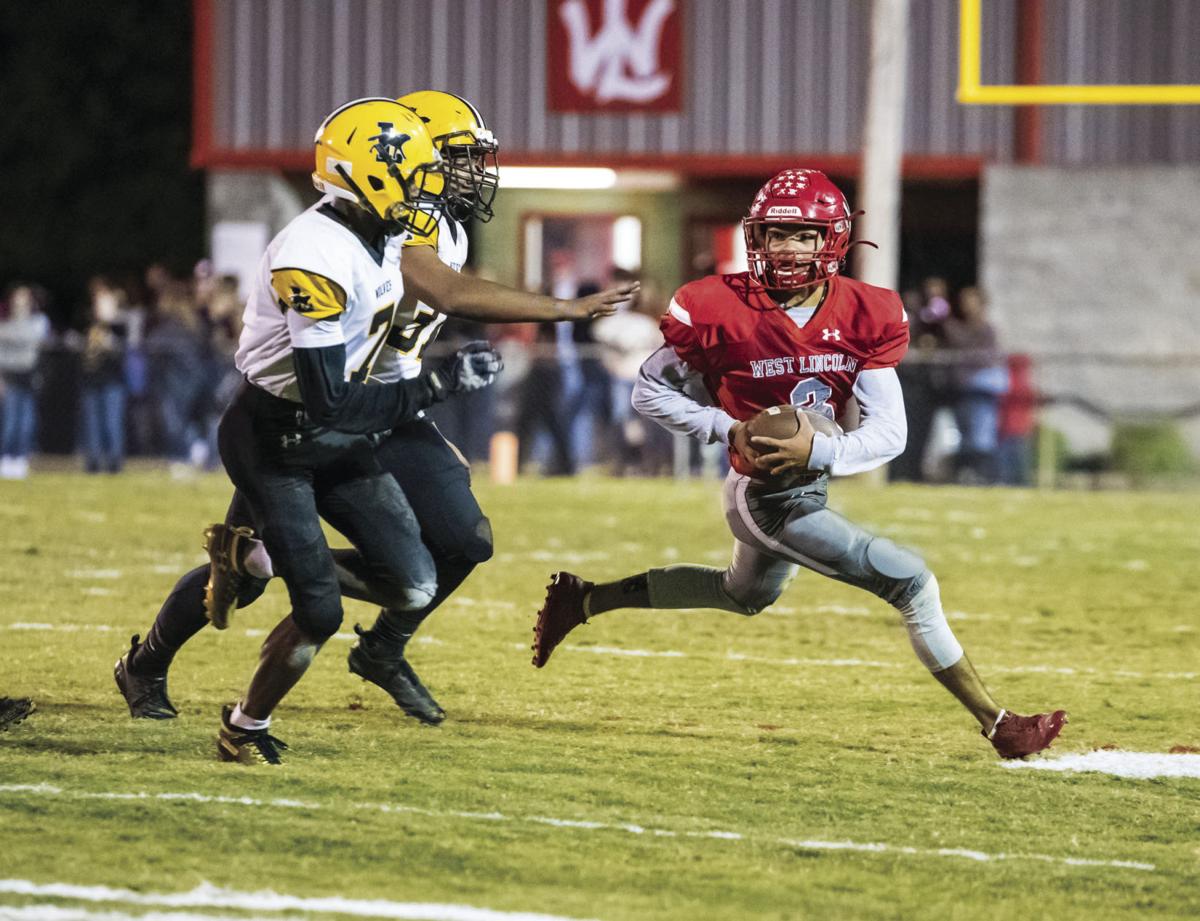 West Lincoln running back Xander Pendergrass beats a pair of Wolves defenders to the edge in Friday night's 54-14 victory. 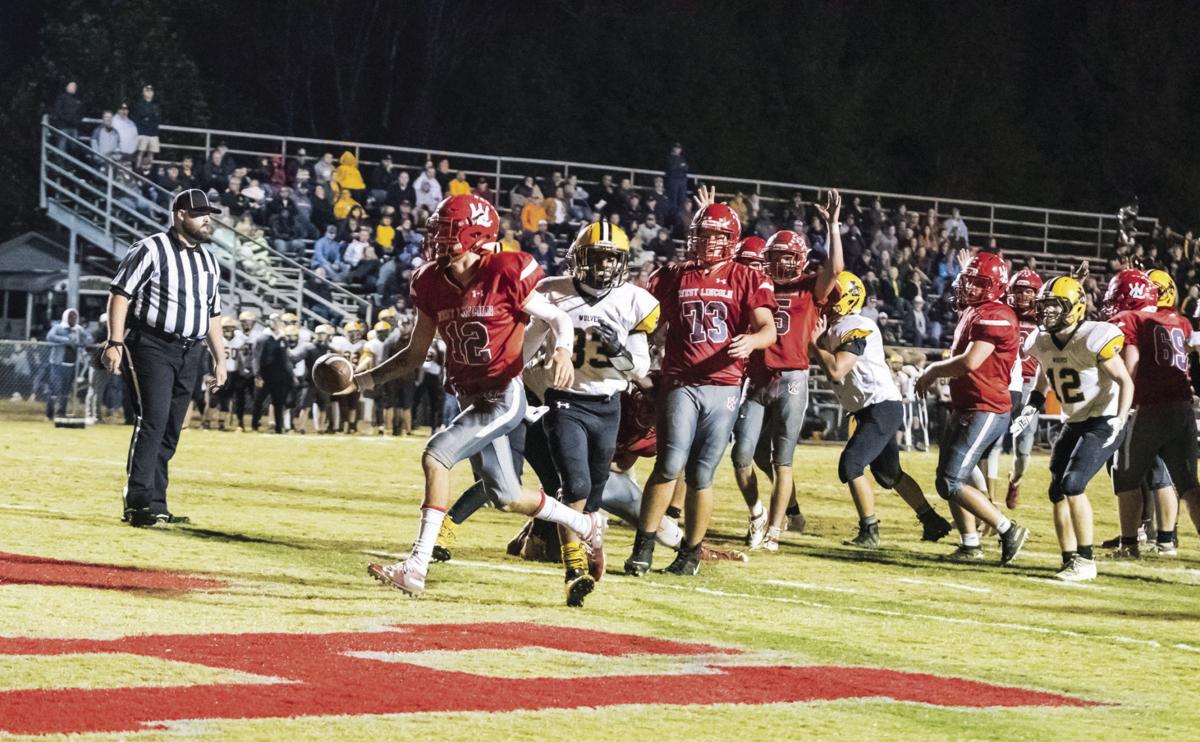 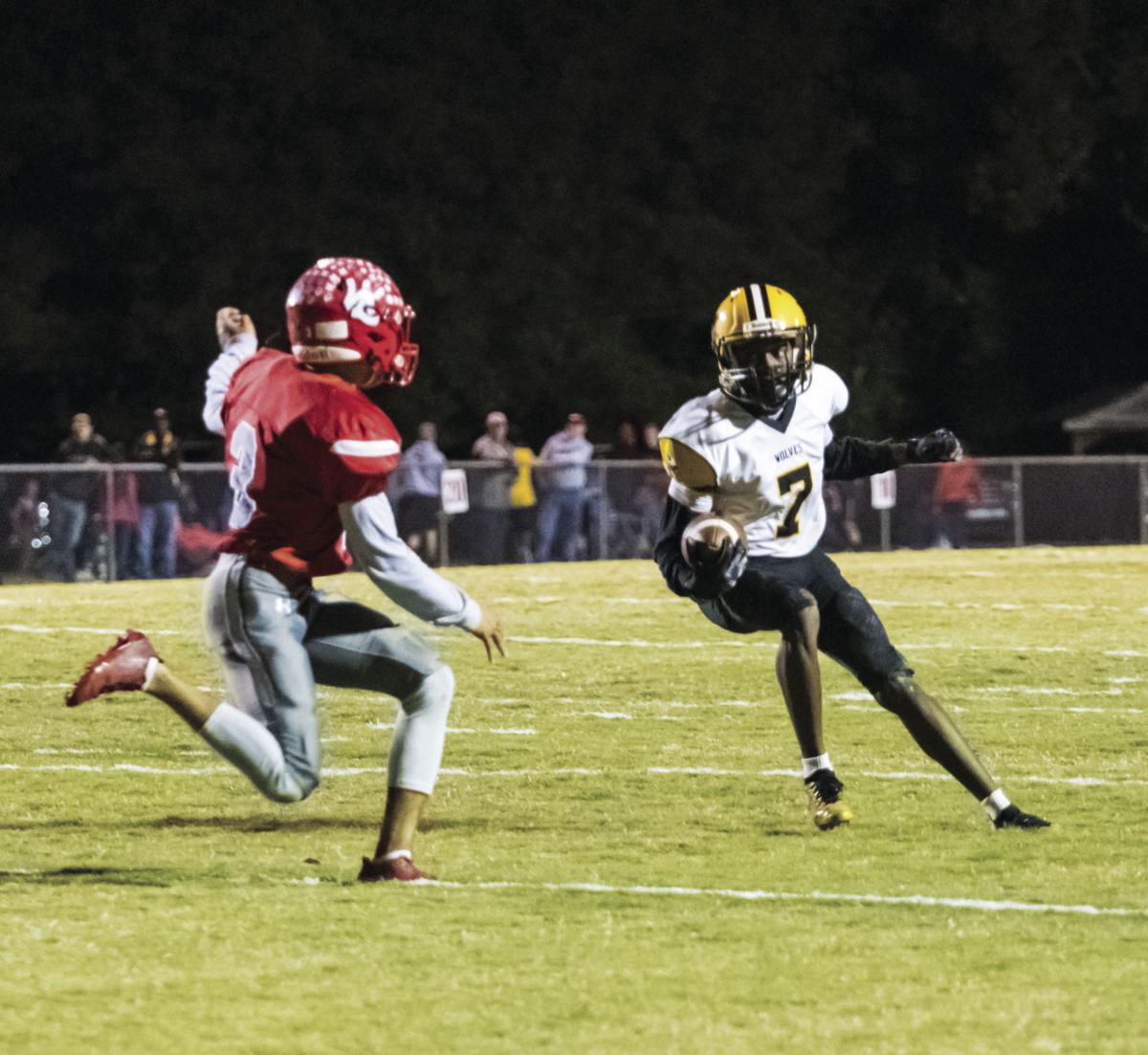 After opening its South Fork 2A slate against arguably the three toughest teams the league has to offer, the West Lincoln Rebels returned home to Vale Friday night and notched a 54-14 victory over the Lincolnton Wolves.

“I’ll tell you, I’ve just got a tough-nosed bunch of kids who work hard,” West Lincoln head coach Darren Ponder said after the game. “They bought into the deal that you’ve got to embrace the grind. They work hard in the weight room, they work hard in practice and they listen to what we tell them. They’re just a great group of kids.”

It was an inauspicious start for both sides. Freshman quarterback Reed King was back under center for Lincolnton after missing last week’s game against Bandys with a concussion, and his first pass was intercepted by Mason Huitt - his quarterbacking counterpart - who made a nice diving play on an under thrown ball over the middle. Huitt returned the favor on the very next play from scrimmage, however, fumbling the snap and giving the ball right back to the Wolves.

An untimely false start on third down derailed Lincolnton’s second possession, and West Lincoln kicked it into gear following the punt.

Another third-down penalty on the Wolves gifted the Rebels a fresh set of downs near midfield. West Lincoln wasted little time taking advantage, with senior running back Xander Pendergrass breaking off a 50-yard touchdown run to take an early 8-0 lead.

Lincolnton took it right back at the Rebels on the ensuing possession, chewing up four minutes on 10 plays. King connected on his first four passes to move the Wolves into the red zone, but the West Lincoln defense stood tall, forcing a 35-yard field goal attempt that sailed wide.

The rout was on from there, as the Rebels pounded the rock relentlessly, gashing an injury-depleted Lincolnton defense. Canon Bridges accounted for more than 60 rushing yards himself on the West Lincoln drive that followed the missed field goal, capping the march downfield with a 10-yard touchdown run to give the Rebels a 16-0 lead at the end of the first quarter.

While West Lincoln ran the ball at will, the Wolves struggled to gain any traction with their ground game. Back-to-back three-and-outs sandwiched a long West Lincoln drive that ended with a turnover on downs deep in Lincolnton territory, but the Wolves couldn’t come up with a second consecutive fourth-down stop the next time the Rebels had the ball, as Huitt found daylight on a quarterback sneak and pushed his way into the end zone for a 7-yard touchdown run.

Lincolnton went back to the air late in the first half in an attempt to put some points on the board. King connected with Amontre Finger and Dejarris Gash on a pair of passes that covered about 30 yards to move the Wolves into West Lincoln territory, but his next pass was intercepted by Hunter Leonhardt and returned 80 yards for a touchdown to give the Rebels a 32-0 lead at halftime.

Lincolnton head coach Joe Glass dialed up an onside kick to open the second half, which the Wolves recovered, and inserted senior E.J. Manjarres at quarterback. Manjarres promptly marched the Wolves down the field on a drive that culminated with an 8-yard touchdown pass on a fade route to sophomore wide receiver Deandra Smith.

West Lincoln responded in kind, as Pendergrass returned the ensuing kickoff into Wolves territory. The Rebels took advantage of the short field, with Pendergrass scoring his second touchdown of the night on an 18-yard run to the outside.

Lincolnton’s woes running the ball continued throughout the third quarter, and West Lincoln extended its lead late in the period on a 3-yard rushing touchdown by Bridges, giving the Rebels a 48-7 advantage heading into the fourth quarter. West Lincoln tacked on another score early in the final quarter on a 4-yard touchdown run by Leonhardt.

The Wolves showed great resilience, however, as Manjarres led another scoring drive with the clock winding down toward the final whistle. Senior Tiaje Ross ripped off a 20-yard run to open the drive, and Manjarres capped it with a 16-yard touchdown run.

West Lincoln’s ability to run the ball at will and stop the run on defense proved to be the difference Friday night. The Rebels racked up 364 rushing yards on 45 attempts, while the Wolves were held to 2 yards per carry, mustering just 63 yards on the ground.