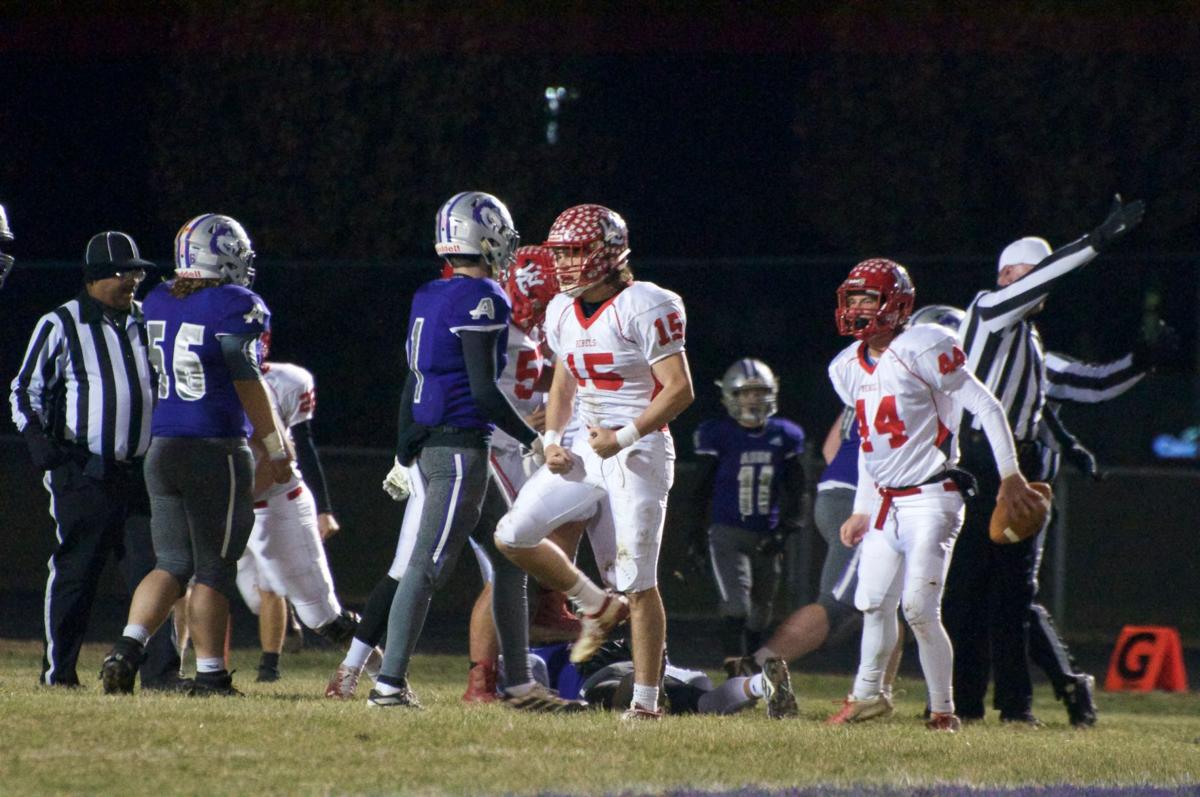 The West Lincoln Rebels celebrate a forced fumble on the opening possession of the game against Ashe County Friday night. 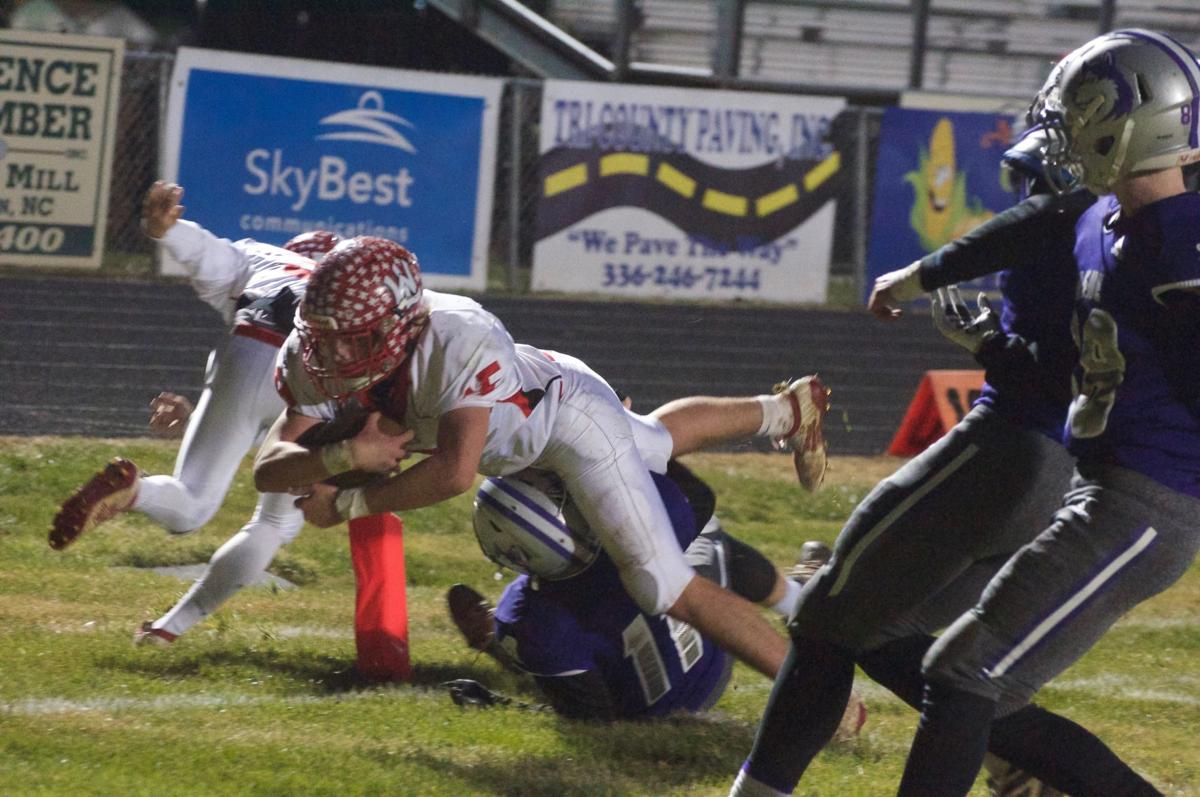 Senior running back Canon Bridges lowers his shoulder and barrels over an Ashe County defender for a two-point conversion in the first quarter Friday night. 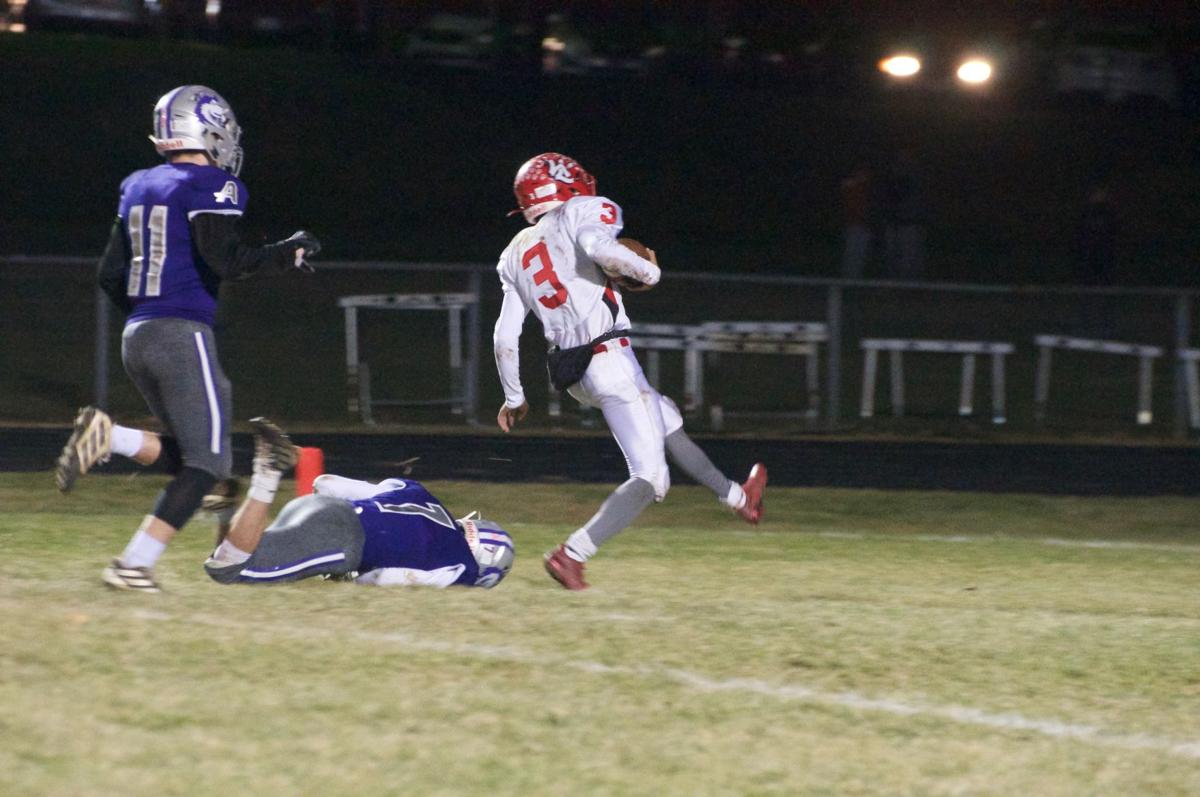 Senior running back Xander Pendergrass leaves a pair of Ashe County defenders in his dust on a 41-yard touchdown run.

It was an historic night for the West Lincoln Rebels up in the mountains of Ashe County, where an inspired defensive effort delivered the first playoff victory in program history.

“We made history tonight,” first-year Rebels head coach Darren Ponder said after the game. “This for all those folks from the past who have been pulling for these boys and have sent us messages. I bet I’ve gotten 10 or 15 calls this week wishing us luck, and for everybody who’s said they’re pulling for us, this is for all of them and all of those past Rebels.”

West Lincoln jumped all over the Huskies from the opening kickoff, forcing a fumble on Ashe County’s first possession of the game.

That’s when the Canon Bridges show started, with the senior running back accounting for every yard on West Lincoln’s first drive, including a 3-yard touchdown run to put the Rebels on top 6-0. Then, after senior linebacker Chandler Carpenter intercepted a pass to give the ball back to the Rebels, Bridges added his second touchdown of the opening quarter.

Fellow senior Xander Pendergrass joined in on the fun after the West Lincoln defense forced Ashe County into a three-and-out, finding a seam for a 41-yard touchdown run to push the Rebels’ lead to 21-0 at the end of the first quarter.

The defense continued to wreak havoc in the second quarter, when senior linebacker Dylan Beam intercepted a pass and returned it 60 yards to the end zone.

Trailing 28-0, the Huskies threatened the end zone on their next possession, but it was West Lincoln that made a play on the ball once again, with junior cornerback Hunter Leonhardt intercepting a pass on the goal line to keep the shutout in-tact.

The Rebels kept their foot on the gas coming out of the locker room after halftime, as Pendergrass fielded the opening kickoff of the second half and returned it 75 yards to the house for his second touchdown of the game.

West Lincoln tacked on another score midway through the third quarter, with Bridges finding pay dirt for a third time, taking it in from 18 yards out to extend the lead to 41-0. The Rebels capped their scoring early in the fourth quarter on a 35-yard touchdown run by quarterback Mason Huitt, as West Lincoln would go on to cruise to a 48-6 victory.

Ashe County entered the game averaging nearly 40 points per contest throughout the course of the season, but the Huskies had no answers for Ponder’s defense. The Rebels forced four first-half turnovers, including three interceptions and the forced fumble on the game’s opening drive that set the tone for the rest of the night.

“All we’ve heard all year is that we can’t stop the pass, so I promise you that was on our agenda,” Ponder said. “This was about proving that we could play the pass, and our guys got after it tonight. This was the best effort we’ve given since the North Lincoln game. They wanted this one.”

On the other side of the ball it was the seniors, Bridges and Pendergrass, who carried West Lincoln to its first playoff victory.

Bridges rushed for more than 200 yards and 3 touchdowns as the featured back. With his monster performance, Bridges surpassed 2,000 yards for the season and has now rushed for 30 touchdowns, both single-season records at West Lincoln.

Pendergrass hit on two huge plays en route to more than 200 total yards, including the long kick return touchdown to open the third quarter, which dashed any hopes Ashe County had of making a second-half comeback.

“Our seniors are our leaders, our best players and our hardest workers,” Ponder said. “I couldn’t be more proud of this bunch of seniors.”

As a reward for its first playoff victory, West Lincoln will host a playoff game for the first time in school history when the South Point Red Raiders make the trip to Vale Friday night for a second-round matchup.