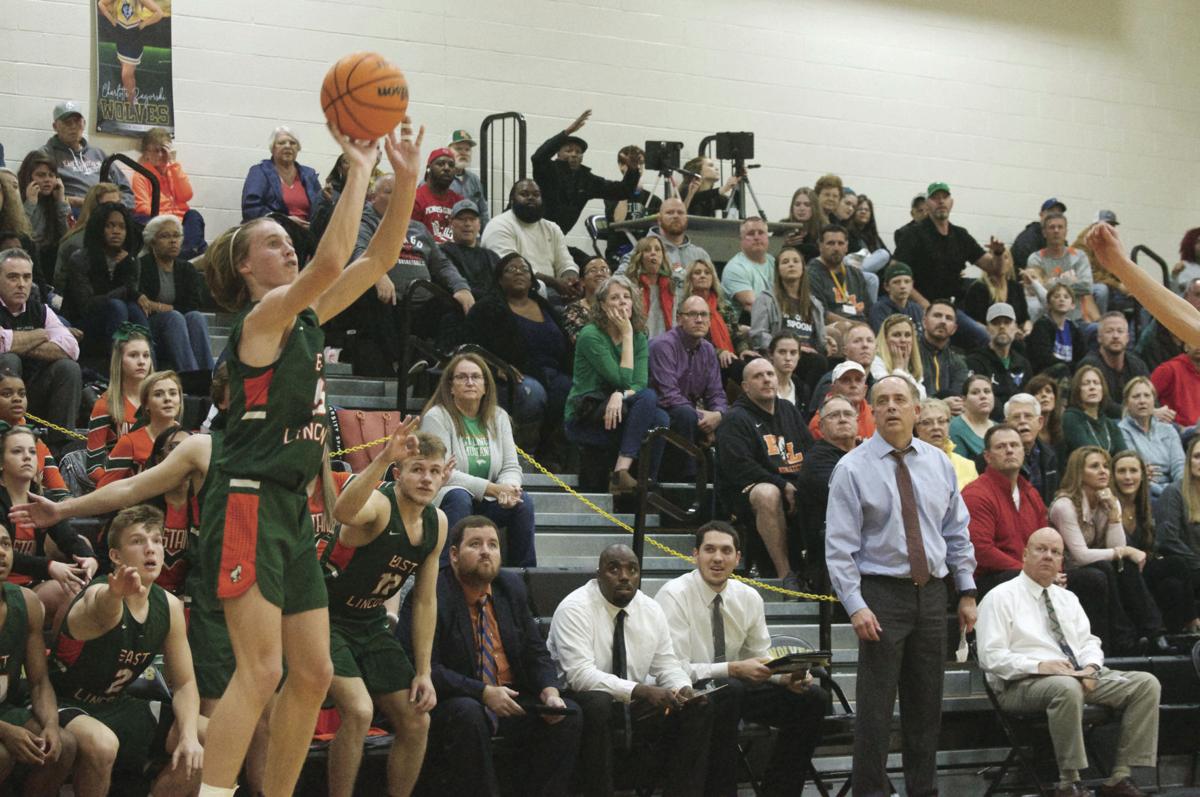 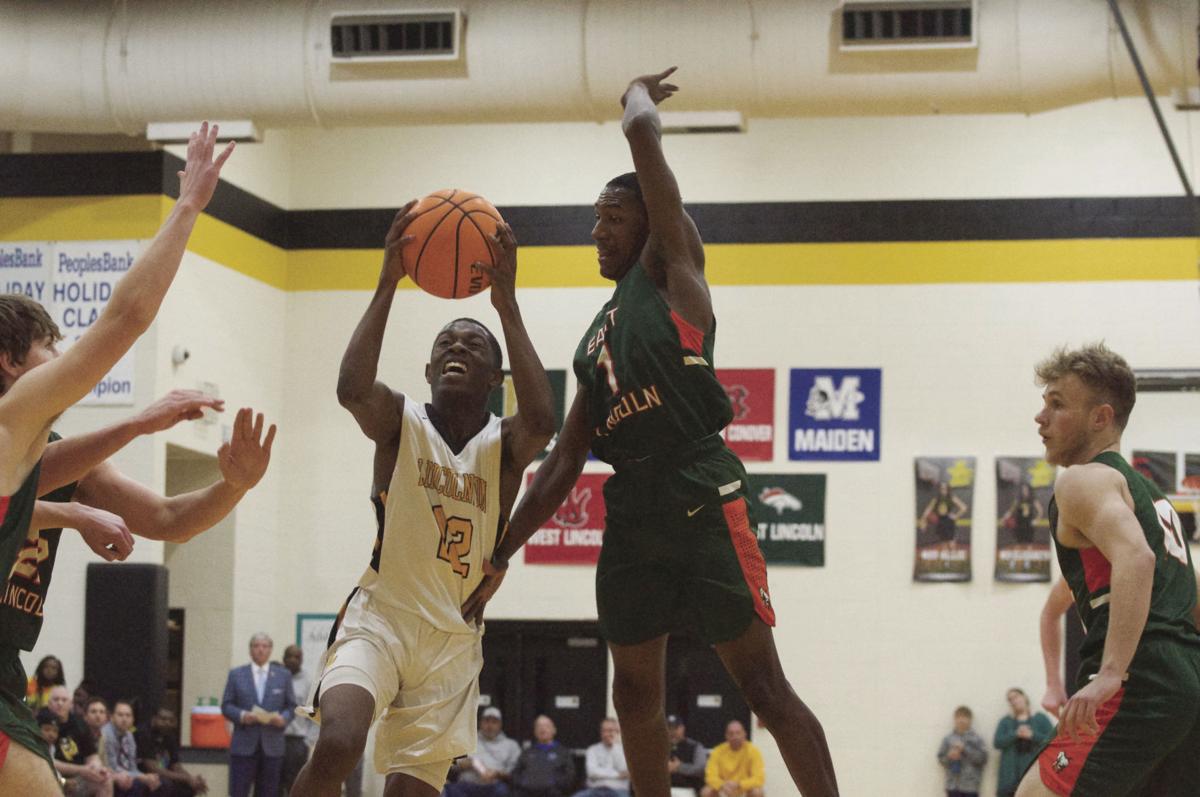 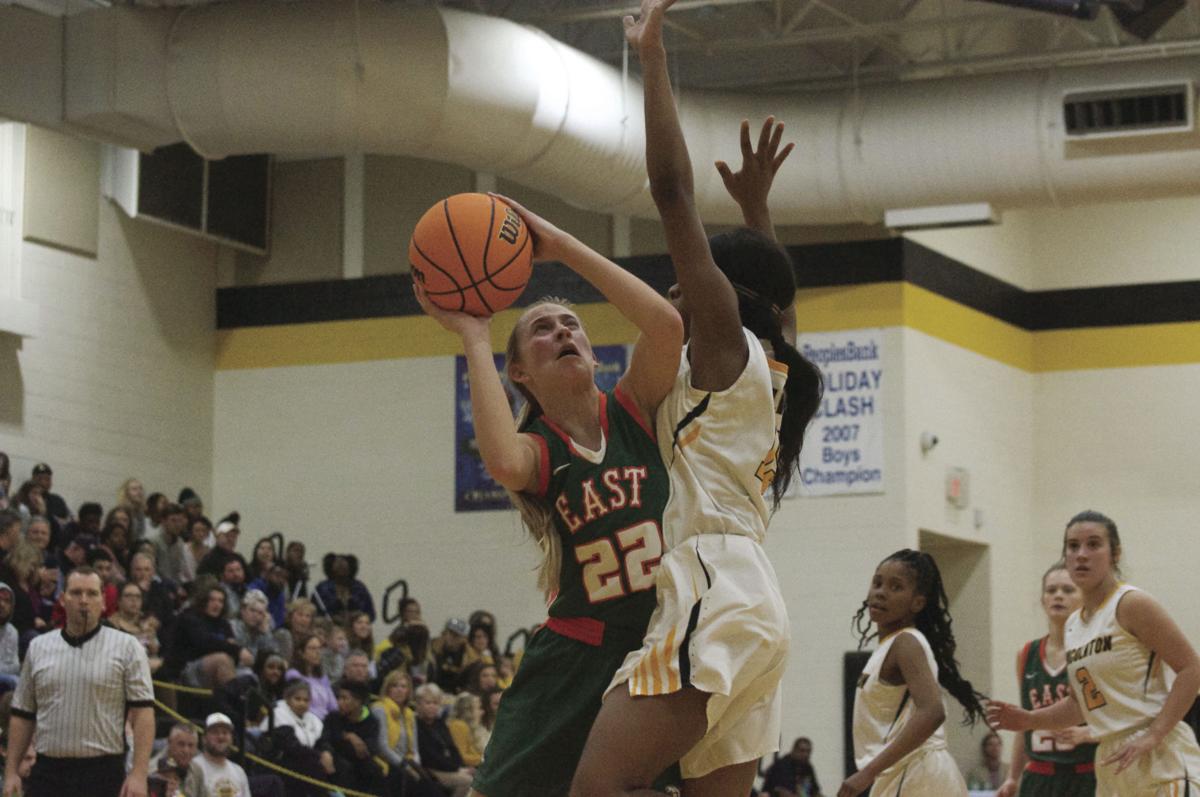 The South Fork 2A rang in the new year with a matchup of Lincoln County’s most heated rivals on the hardwood Friday night, and the game didn’t disappoint. The East Lincoln Mustangs made the trip to Lincolnton and returned home to Denver with a 69-55 victory, but the game was much more intense than the final score suggests.

There’s not much of a feeling out process between teams as familiar with one another as the Wolves and East Lincoln, and a back-and-forth start saw the game tied 8-8 midway through the first quarter. It turned out to be a game of haymakers, however, and the Mustangs swung first, closing the opening quarter on a 12-0 run to take a 20-8 lead.

Lincolnton found its rhythm offensively in the second quarter, putting 21 points on the board to keep pace with East Lincoln, but keeping pace is all they were able to do. East Lincoln sophomore Evan Montanari caught fire to keep the Wolves at bay, knocking down three 3-pointers en route to 16 points in the first half, which ended with the Mustangs on top 42-29.

East Lincoln won all three matchups between these county rivals a year ago, doing so by an average margin of about 25 points, and it appeared as though the Mustangs might be on their way to another throttling of Lincolnton. The Wolves weren’t going down without a fight, however, and Lincolnton dazed the Mustangs with an onslaught of energy coming out of halftime.

Senior guards Davis Grooms and Dejarris Gash sparked the rally for the Wolves, which opened the second half on an 18-4 run to take their first lead since the game’s opening minutes at 47-46, forcing East Lincoln to call a timeout to regain its composure. The Mustangs did settle down, adding a pair of buckets in the final minute to recapture the lead at 50-47, setting up a dog fight of a fourth quarter.

As the game got tighter, the intensity ratcheted up, with both teams hoping to avoid an 0-2 start to conference play. The gym was already buzzing, and when Gash put his defender on skates before stepping back to launch a 3-pointer that found nothing but net and tied the game at 53-53, the roof nearly came off the building.

That’s as close as Lincolnton would get, however, as East LIncoln never panicked despite having blown a 13-point halftime lead. Clinging to a 56-55 lead with about three minutes left in regulation, the Mustangs dug deep one more time and delivered the knockout blow. With the Wolves applying pressure, Montanari calmly stepped up and knocked down his fifth 3-pointer of the game, giving East Lincoln some breathing room and sparking a 13-0 run to end the game.

Montanari led all scorers in the contest with 24 points, which is a new career-high for the sophomore, who also dished out 5 assists and recorded 4 steals. Grooms led the way for LIncolnton with 19 points, while Gash added 18 points and junior Amontre Finger finished with 11.

The Wolves also deserve credit for containing East Lincoln’s Justin Kuthan down low, holding the senior to a season-low 8 points Friday night. Lincolnton junior Connor Williams was the primary defender on Kuthan for much of the game, and he did an outstanding job fronting the post to deny entry passes to East Lincoln’s leading scorer.

While Kuthan was quiet for most of the night, he threw down an emphatic dunk in the game’s final seconds to put an exclamation mark on East Lincoln’s victory. Kuthan also pulled down 15 rebounds in the contest, marking his best effort on the glass this season, and finished with 3 blocks.

With the win, East Lincoln improves to 7-3 overall on the season and 1-1 in the South Fork 2A, while Lincolnton falls to 4-7 overall and 0-2 in league play. Both teams will return to the court Tuesday evening, with the Mustangs traveling to North Lincoln to face the Knights, while the Wolves will welcome Bandys to Lincolnton.

Prior to the men’s game, the East Lincoln Lady Mustangs jumped all over Lincolnton, racing out to a 27-1 lead midway through the second quarter and never looking back.

It was a balanced attack for East Lincoln, which saw 12 different players enter the scoring column, led by sophomore Taliyah Thomas, who finished with 14 points to lead all scorers in the contest. Senior Katie Cox added a double-double, finishing with 13 points and 10 rebounds while also recording 6 steals on defense.

The Lady Wolves were led by freshman Mackenzie Sand-Odom and junior Haley Morris, who each finished the night with 8 points.