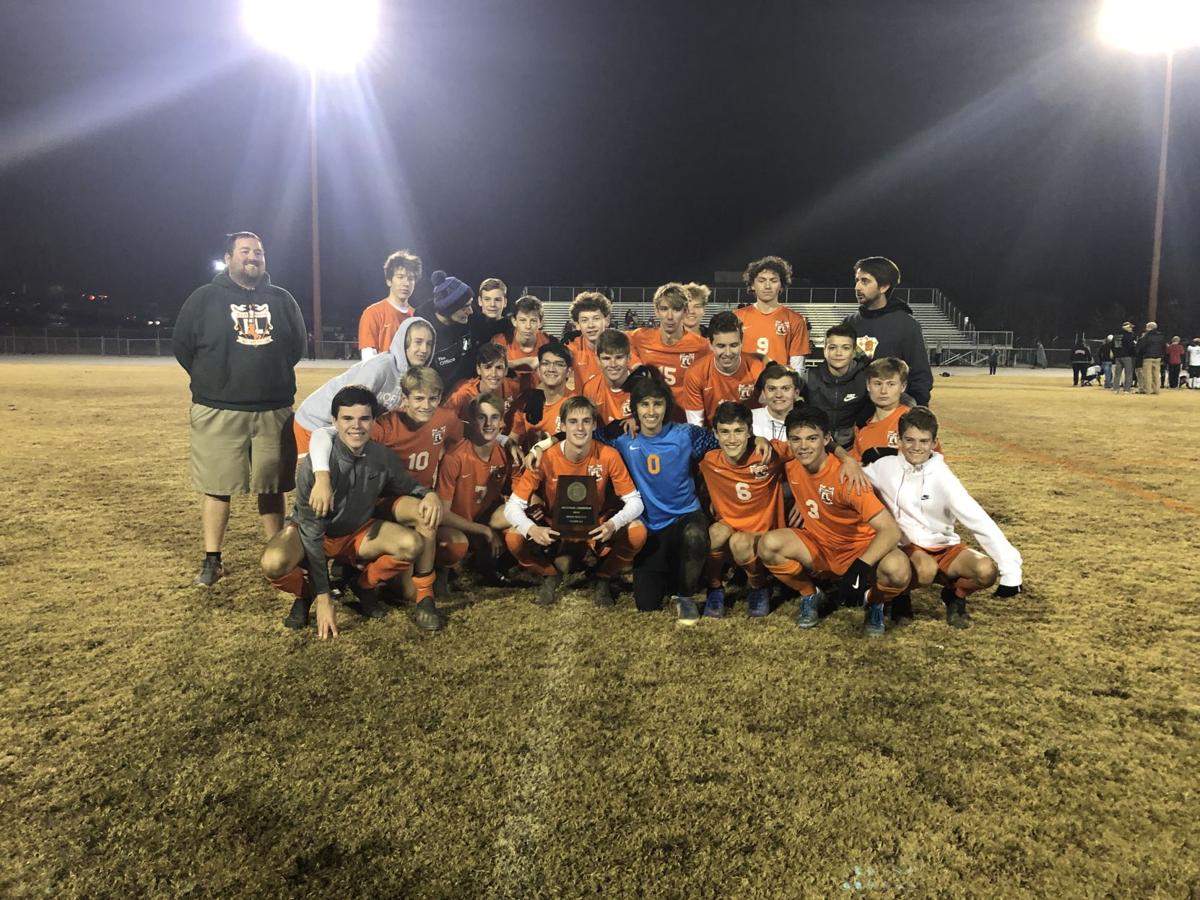 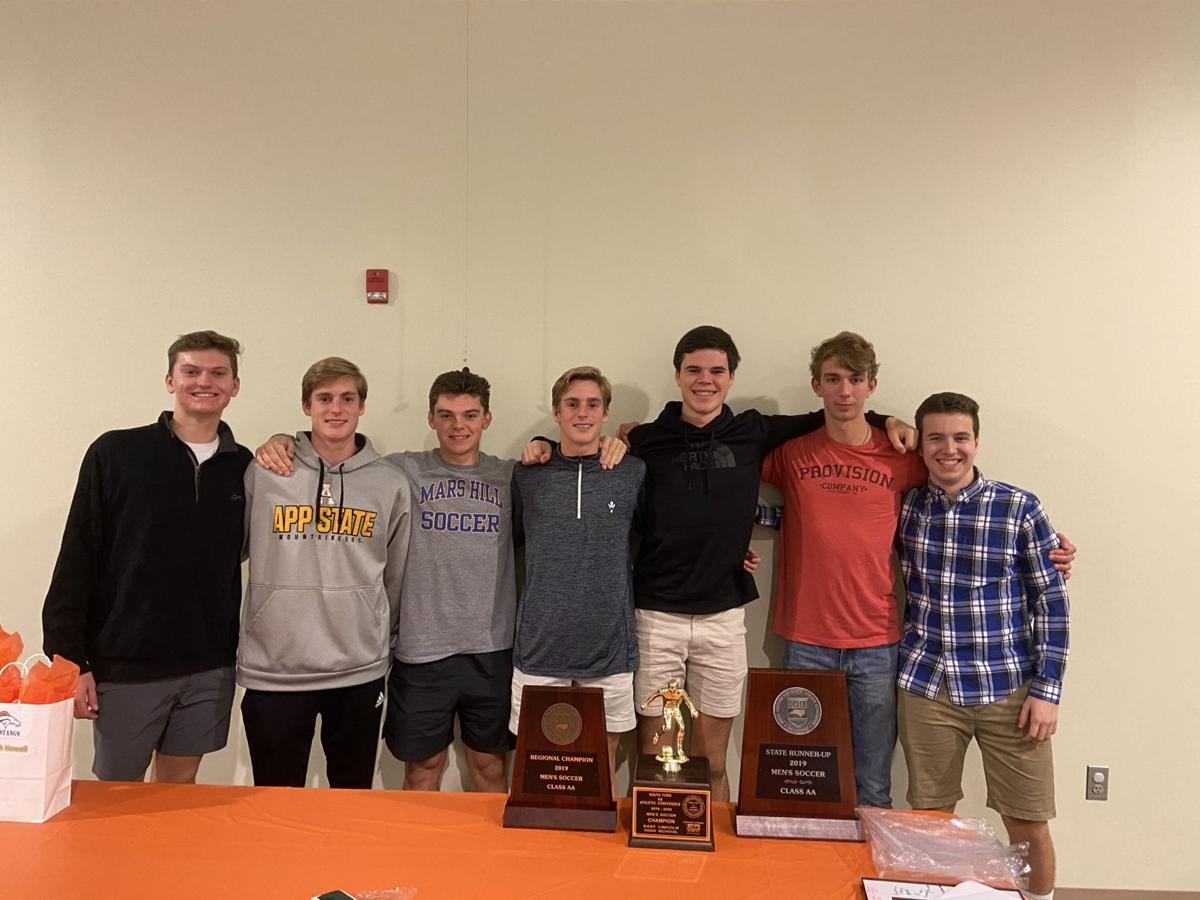 The East Lincoln senior class, minus Carlos Hueck, with just some of the hardware collected by the team this year. 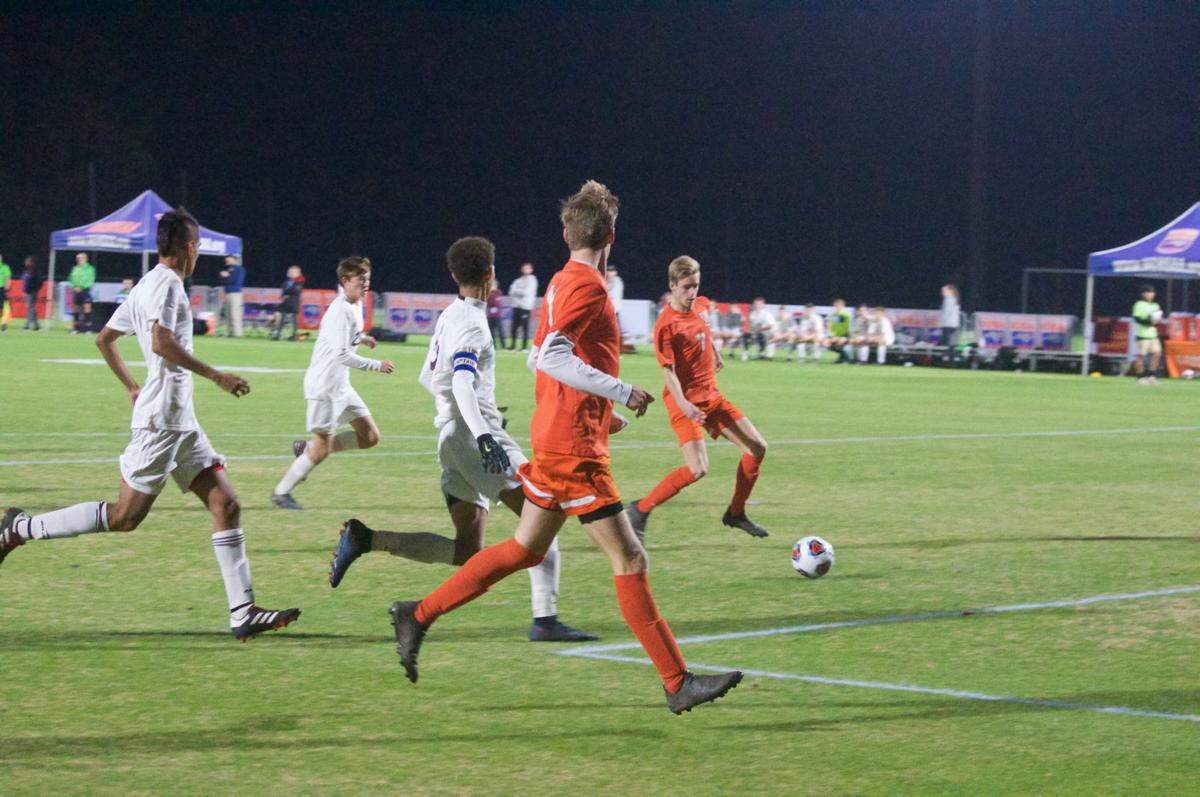 East Lincoln senior brothers Logan (near) and Chase Gilley connect for a goal in the state championship.

The East Lincoln men’s soccer program held its annual awards banquet Wednesday evening, but this year’s celebration was a bit different than those in past years. Not only was there more to celebrate, considering the number of firsts the Mustangs accomplished this season, but East Lincoln also said goodbye to a senior class that helped elevate the soccer program to new heights unmatched in the history of Lincoln County.

The Mustangs graduate eight seniors -- Chase Gilley, Logan Gilley, Pearson Cunningham, Noah Graden, Tyler Swanson, Matt Kosmala, Joey Benson and Carlos Hueck -- but the bond between those players dates back to before their time at East Lincoln. With the exception of Kosmala, who joined the crew in middle school, that group of seniors has been together on and off the field since kindergarten.

“On the field, it helped because we just knew each other’s tendencies,” Swanson, East Lincoln’s rock on the back line, said.

“It’s a great feeling being able to play with guys you know so well,” Graden, who will continue his playing career in college at Mars Hill, added. “I know exactly what they’re going to do out there on the field and I trust them.”

The camaraderie was there from the beginning, and the guys continued to improve throughout the years, leading East Lincoln Middle School to the conference championship game as eighth graders. Even though they lost that game, it provided a boost in confidence heading into high school.

“We went to the conference championship and lost, but in our defense we were so much smaller than everyone else in eighth grade and we were still able to make it that far,” Swanson said.

“I think we kind of always knew that we could do something special, but after eighth grade we knew that we’d have a chance to win a lot over the next four years,” Graden added.

Despite that confidence, it wasn’t always smooth sailing for East Lincoln soccer.

In 2016, when the members of the 2020 senior class were freshmen, the Mustangs finished with a losing record. That team didn’t include the Gilleys, however, who played club soccer that year rather than joining the school team.

Chase and Logan joined the team as sophomores, and while East Lincoln didn’t enjoy instant success, the Mustangs did improve by six wins, finishing 14-9 and third place in the South Fork 2A.

“It was all about coming back and playing with the boys again,” Chase Gilley said of the decision to play for East Lincoln rather than playing club soccer. “I missed the rest of the guys and I missed just being able to go out and have fun playing without it feeling like a job the whole time.”

The fun started junior year in 2018, when the Mustangs set a new school record with 22 wins, including an improbable trip to the fourth round of the playoffs, where the season ended with a heartbreaking 3-2 loss at Salisbury.

The 2018 season put East Lincoln on the map, and despite the pressure of expectation as seniors, the Mustangs answered the bell and proved to be the dominant force everyone expected to see. This year, East Lincoln rattled off 27 consecutive victories to start the season, shattering the single-season record for wins that was set the year prior, while also winning the conference to snap Newton-Conover’s stranglehold on the league and becoming the first team in the history of Lincoln County soccer to appear in the state championship.

The Mustangs ultimately fell one win short of completing a perfect season, losing 4-3 to Dixon in the 2A state championship. While the seniors will always wonder what could have been -- East Lincoln was in the midst of a furious rally, scoring two goals in the final 10 minutes to cut the deficit to 4-3 before time ran out -- their success over the past four years is unrivaled in Lincoln County.

Individually, the Gilleys, Cunningham, Graden and Swanson were each all-conference and all-region selections as seniors. Additionally, the Gilleys were both selected to the all-state team. Chase Gilley, specifically, was named South Fork 2A Offensive Player of the Year and was one of 12 players from North Carolina selected to the United Soccer Coaches All Mid-Atlantic Team.

Despite playing just three years at East Lincoln, the Gilleys depart as the most accom- plished soccer players to ever come out of Lincoln County, ranking among the state’s top all-time players as well.

As seniors, the Gilleys finished one-two in the state in points, with both ranking among the top five in goals. Chase Gilley led the state with 61 goals, which is tied for ninth most in a single season in state history, while Logan’s mark of 56 ranks within the top 15.

For his career, Logan Gilley scored 106 goals and dished out 61 assists. Chase Gilley ends his career with 134 goals and 73 assists, ranking top 15 in state history in both categories. Chase Gilley is one of only two players in the history of the state to rank in the top 15 in both career goals and assists. Both Chase and Logan will play collegiately at Appalachian State starting in the fall.

Collectively, East Lincoln scored 173 goals in 2019, marking the seventh most in a single season in state history. The Mustangs have posted a 49-5 record over the past two seasons and the 2020 senior class departs with 71 victories in four years, which is the most in program history by a mile.

Looking back, the seniors agreed their favorite memories from their time at East Lincoln included playing in front of huge home crowds throughout the playoffs this season and the sendoff they received from their classmates prior to the state championship. They also shared some fond memories from preseason camp at Wingate, where the Mustangs came together as a team to build the foundation for their immense success on the field.