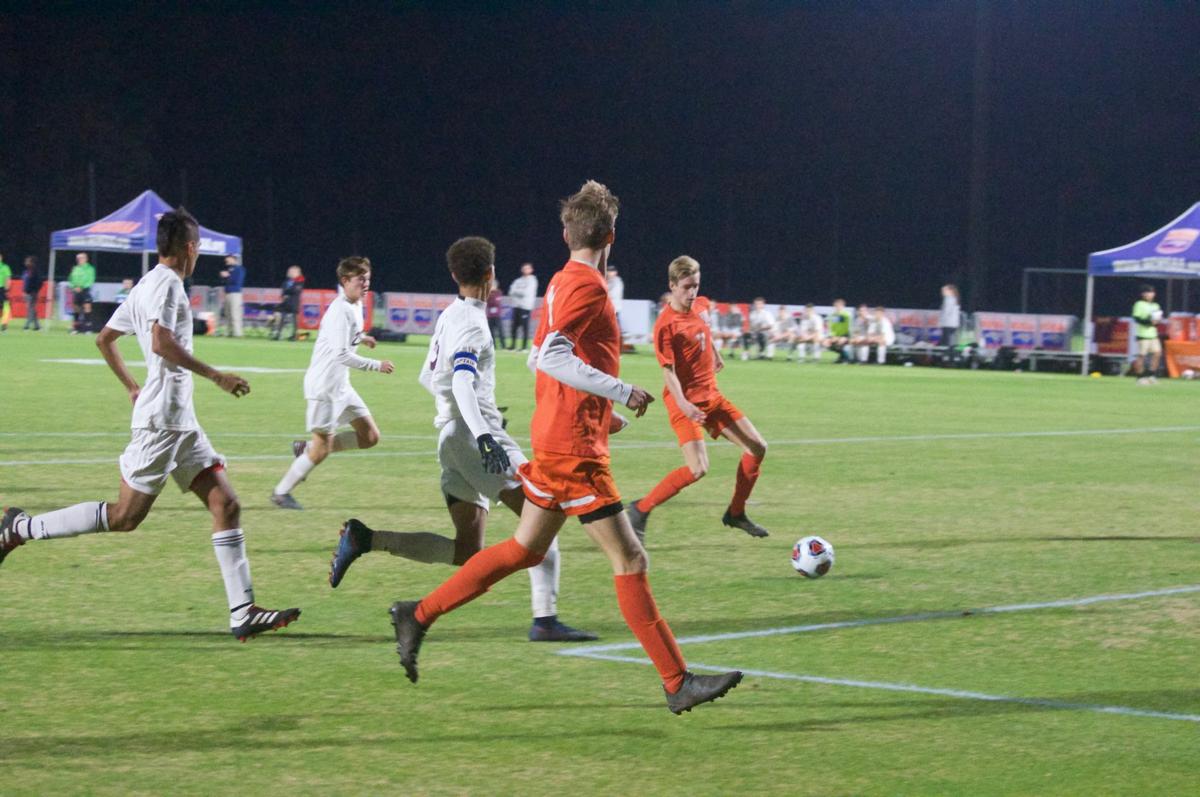 Logan Gilley, near, dishes the ball to his brother, Chase, for a goal in the opening minute of the 2A State Championship Friday night. 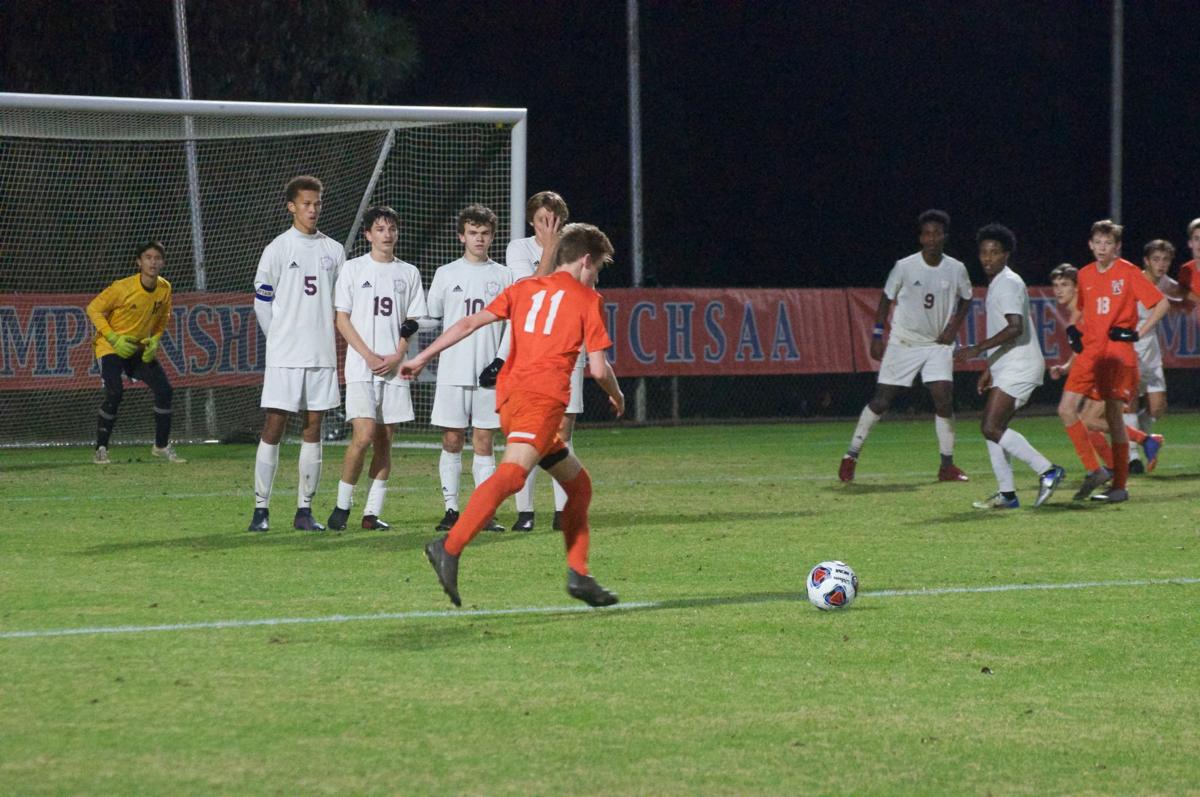 Logan Gilley approaches a free kick from just outside the box in the closing minutes of Friday's 2A State Championship against Dixon.

It wasn’t the outcome the Mustangs wanted, but East Lincoln showed tremendous grit in nearly rallying from a three-goal deficit before ultimately falling 4-3 to the Dixon Bulldogs in the 2A State Championship at WakeMed Soccer Park in Cary Friday night.

As has been the case all season, the effort was led by the Mustangs’ seniors, and it started with a bang in the first minute of action, when Logan Gilley found his brother, Chase, right in front of the net for an early 1-0 lead.

East Lincoln steamrolled through the playoffs - winning five games by a combined 23 goals - and it seemed as though that might be the case again for the unbeaten Mustangs after the early fireworks, but the Bulldogs settled in and controlled possession of the ball for much of the remainder of the first half. Dixon tied the game midway through the first half when East Lincoln failed to clear a corner kick, and then nearly added another in a similar scramble in front of the goal about 10 minutes later.

The Mustangs unlocked the Dixon defense late in the half, with Chase Gilley firing one off the post in the final minutes. Then, as the last seconds ticked off the clock prior to halftime, he beat the keeper for his second goal, or so it seemed, but he was ruled offside, and the score remained deadlocked at 1-1 going into halftime.

That call would prove to be critical, as the Bulldogs turned up the heat early in the second half.

Dixon pulled ahead nine minutes in, when senior Matthew Hardison drove a corner kick on goal, which deflected off the keeper and into the net. East Lincoln’s problems compounded less than two minutes later, as keeper Will White couldn’t corral a save and the Bulldogs scored again to pull ahead 3-1.

As East Lincoln went on the attack with less than 10 minutes remaining in regulation, Dixon caught them on the counter attack. White was able to make a one-on-one save on the breakaway, but without any Mustangs there to clear the ball, the Bulldogs scored off the rebound for a seemingly insurmountable 4-1 lead with nine minutes left to play.

That’s when the East Lincoln seniors dug in one last time. Tyler Swanson, the Mustangs’ leader on the back line, wouldn’t let any of his teammates hang their heads, encouraging everyone to fight until the final whistle, while midfielders Noah Graden and Pearson Cunningham provided a jolt of energy, flying around the pitch to steal extra possessions while leaving everything they had out there on the field.

Then there’s the Gilleys, who combined for two goals in three minutes to breathe life into the Mustangs. As was the case in the first minute of action, Logan assisted Chase on both goals, and East Lincoln pulled within 4-3 with four minutes on the clock.

The Mustangs continued to push the issue, and Chase Gilley earned a free kick from just outside the 18-yard box. Logan Gilley approached the ball and whipped a low line drive around the wall built by the Dixon defense, but the Bulldogs’ keeper secured the save to thwart what proved to be East Lincoln’s final opportunity.

While it won’t take away the sting of falling just shy of a state championship, Gilley’s hat trick pushed his total to 61 goals this season, shattering his own school record from a year ago. Chase Gilley finishes with 134 goals in three illustrious seasons with the Mustangs, while Logan Gilley netted 56 goals this season to bring his career total to 106, with the two joining a group of fewer than 50 players in North Carolina history to eclipse 100 career goals.

The Mustangs should hold their heads high, especially the seniors who have helped East Lincoln soccer reach new heights over the past two years. East Lincoln has won 49 games since the start of last season, including a record 27 wins this season en route to the program’s first appearance in the state championship.