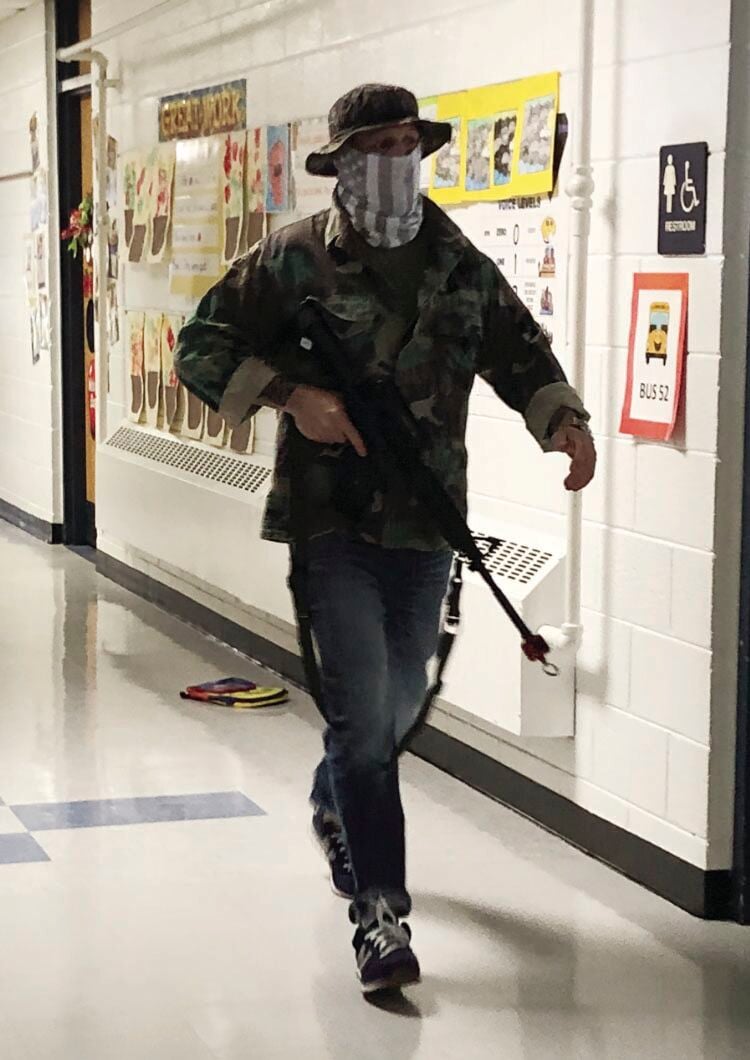 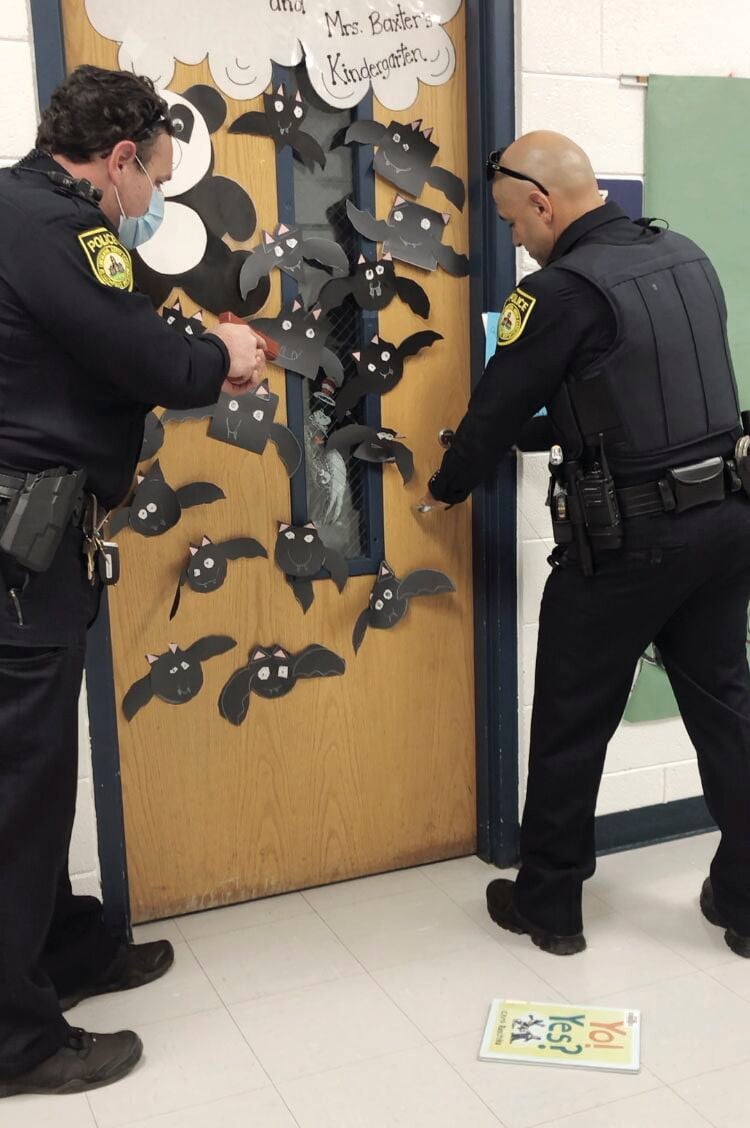 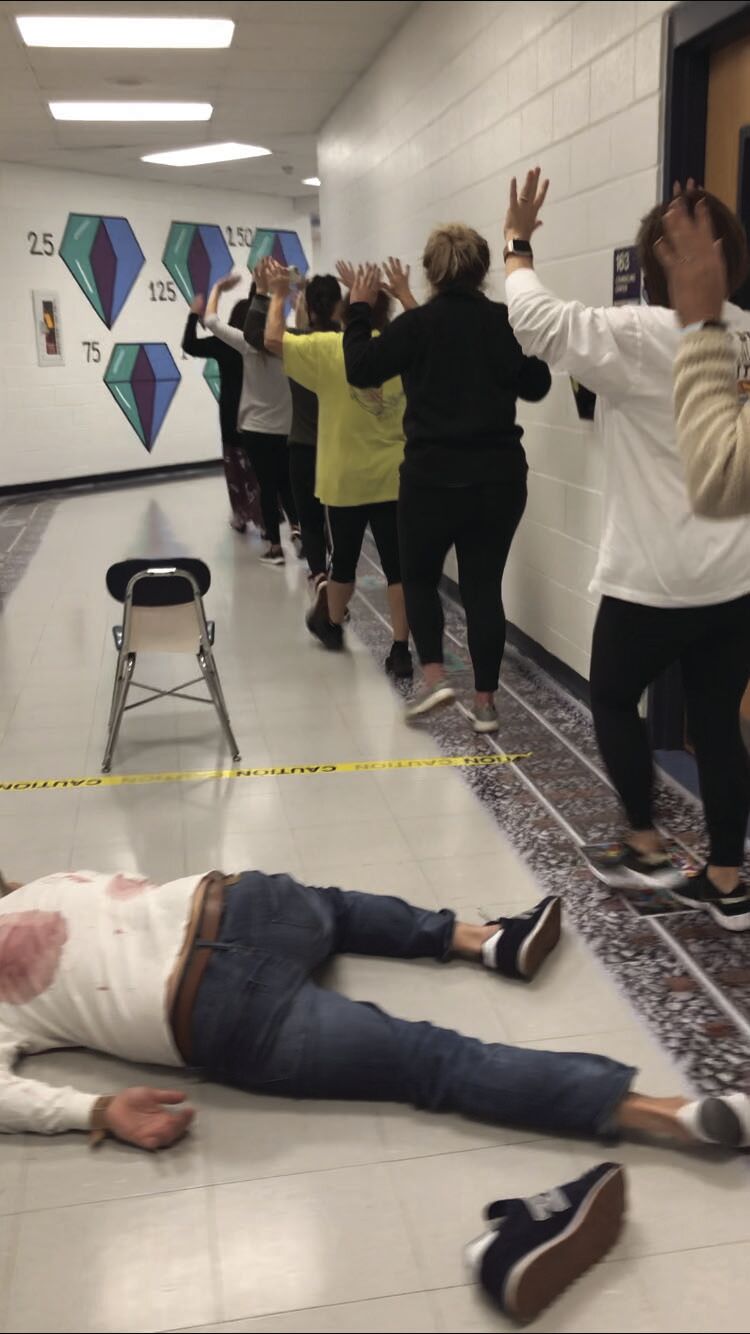 Encountering a masked individual carrying an assault rifle in the hallway or hearing gunshots followed by blood curdling screams is not anything that any teacher or administrator wants to experience. Lincoln County Schools regularly performs drills of all kinds – fire and lockdowns, but teachers and administrators at G.E. Massey Elementary School in Lincolnton recently conducted a drill that was much more realistic.

Victor Morales, a police officer who recently started at the Lincolnton Police Department, came to the department with 14 years of experience and a background in rapid deployment. He’s certified by North Carolina to teach rookie police officers.

“That’s training an officer to go to an active threat,” he said. “When we train the officer, we use sounds, props and bad guys. I wanted to bring that to the schools in the areas to try to expose them to that aspect of an active threat.”

Morales employed recordings of screaming – children and teachers, a bad guy, a bloody body, gun shots and of course other Lincolnton Police officers to make this drill that much more realistic for the teachers at G.E. Massey. A similar drill was also conducted at Asbury Academy. No students were present during the drills and there’s no live ammunition used. The goal is for these drills to be conducted at all Lincoln County Schools within the Lincolnton city limits, according to Morales.

The drill begins with a briefing and lockdown protocols are reviewed.

“We’ve had staff from 911 communications come to the drills to explain how that process works,” he said. “It’s been a great thing because it gives the officers training too. We plan to bring in EMS and the sheriff’s office later on as well. What we bring to the table is that stress factor. The human body reacts differently during stress.”

During stress, it’s hoped that staff would respond as they’ve been trained in regular drills, Morales said, but some of them realize that they need to do different things like switching their hiding spots in their rooms.

“We’re there during the drill and can always bounce back and forth ideas,” he said. “We can work together. Any additional training that the teachers can get is a win for us.”

Communication is key during a high stress situation, Morales added. We go over those sorts of things during the debriefing. For example, if a shooter is in the main office of a school building, shots may not be heard in the gymnasium. The ideas developed during the drills is sent on to the LCS superintendent.

“Without the kind of specialized training that Victor has had, it’s difficult to put on something like this because of the liabilities and details involved,” LPD Lt. Dave Mocanu said. “It’s given us a new level of training.”

Kelly Withrow, the principal at G.E. Massey admitted that when she was a teacher, she didn’t think much about the potential of there being a shooter at school, but when she became an administrator, that changed. School shootings haven’t really been in the national news lately perhaps because children have been learning remotely but given the state of unrest many individuals are currently in, it stands to reason that a school or other mass shooting may be on the horizon.

“I’d be lying if that wasn’t the first thing that I thought of when I pull into the parking lot in the morning,” she said. “It’s my job. My first priority is to keep my staff and students safe. Unless we have a safe environment to learn in, we can’t achieve academics.”

Joanna Belcher, fourth grade teacher who played the part of a student in the drill said that the worst part of the drill for her was hearing the recording of children screaming.

“Not that the gun shots didn’t bother me,” she said. “That part of it (the screaming) made it feel real.”

The drill offered Belcher a lesson in staying calm. Even though she played the part of a student, she said she was thinking like a teacher.

“We were all sitting there thinking there was no way we were going to be able to keep our kids calm and quiet for that long a period of time,” she said. “It felt like we were sitting there forever. We were getting antsy and we’re adults.”

They were locked in their rooms for approximately 25 minutes after the gun shots and screaming first started. After the drill, it was suggested that teachers keep a bucket of supplies in their rooms filled with items like books to help keep children focused during a lockdown.

During the drill, Withrow pulled the fire alarm to see if the teachers would exit their rooms. The alleged school shooter at the Parkland school massacre pulled a fire alarm and as students exited the building, he shot them. At G.E. Massey, however, all of the teachers stayed locked in their rooms as they were supposed to.

“My staff takes this very seriously,” she said. “We do our drills religiously. We reflect and talk about it after. We learned a bunch in this drill.”

Brianna Ubel, a first-grade teacher admitted that she made a mistake during the drill in that one of her students had to go to the bathroom right before the drill started. When the first gunshot rang out, they all ran to their room and Ubel closed and locked the door.

When the officers came to escort them out of their rooms, they asked if that was everyone and Ubel responded that it was, again forgetting momentarily about the missing student.

“In the heat of the moment, in my mind, everyone was out of the room,” she said. “Then I realized, no it wasn’t everybody. I have a kid in the bathroom. That was eye opening to me. Even today, we had a fire drill today, and I counted all of my kids four times.”

As a parent who has children at G.E. Massey, Caroline Cason, a first-grade teacher, said that the potential of a shooter is always on her mind.

“I want to know that someone is taking care of my kid – someone who will die for my kid to keep them safe,” she said. “You always think you know exactly what you’re going to do but when that panic sets in, it’s hard. That’s what’s scary.”

“Hopefully not here in Lincoln County or at G.E. Massey, but we’ve got to take it seriously,” she said. “It’s just the day and age we live in. People are troubled, to put it nicely. With everything that’s going on, you just don’t know where people’s minds are.”