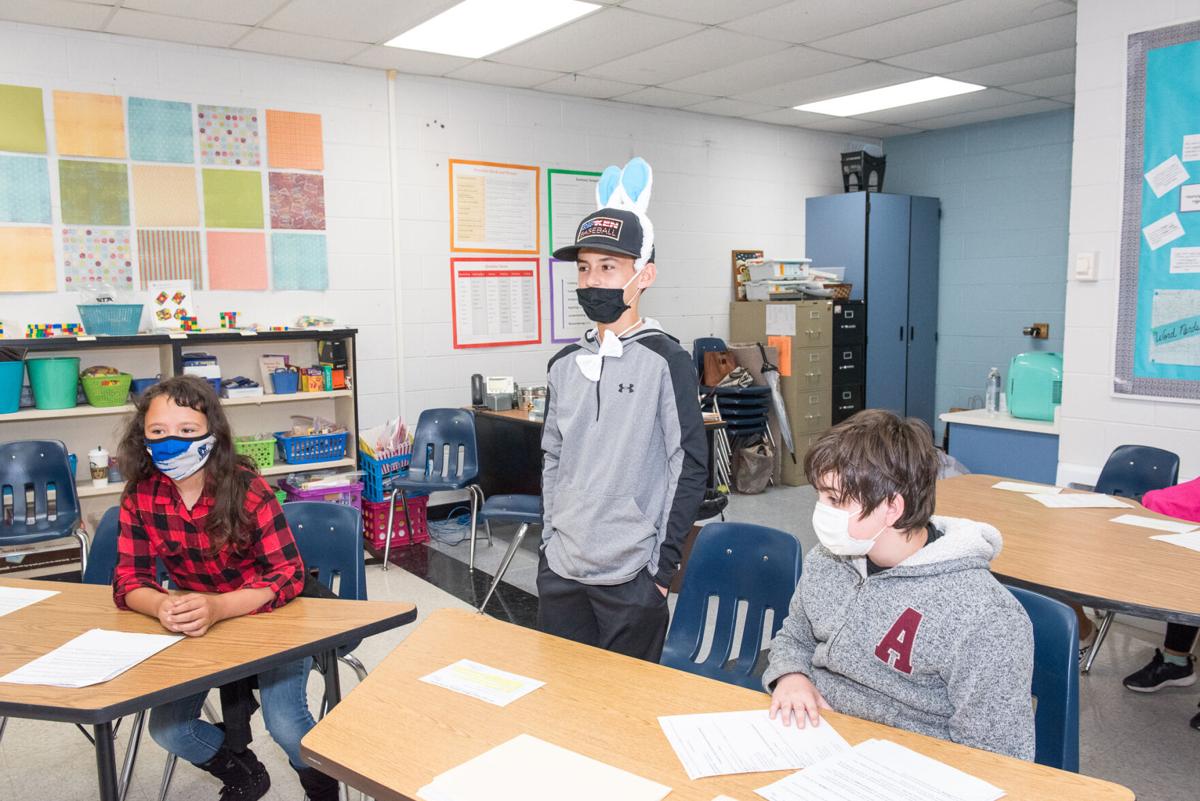 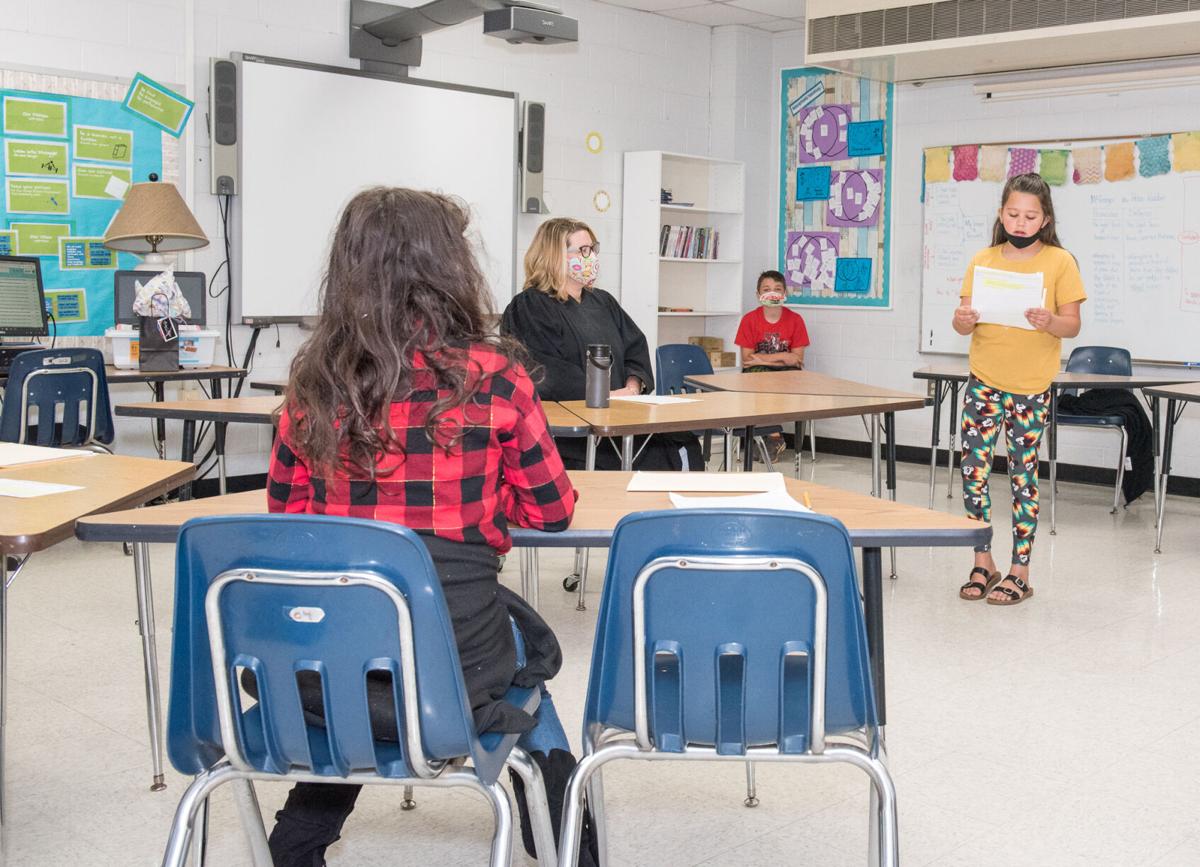 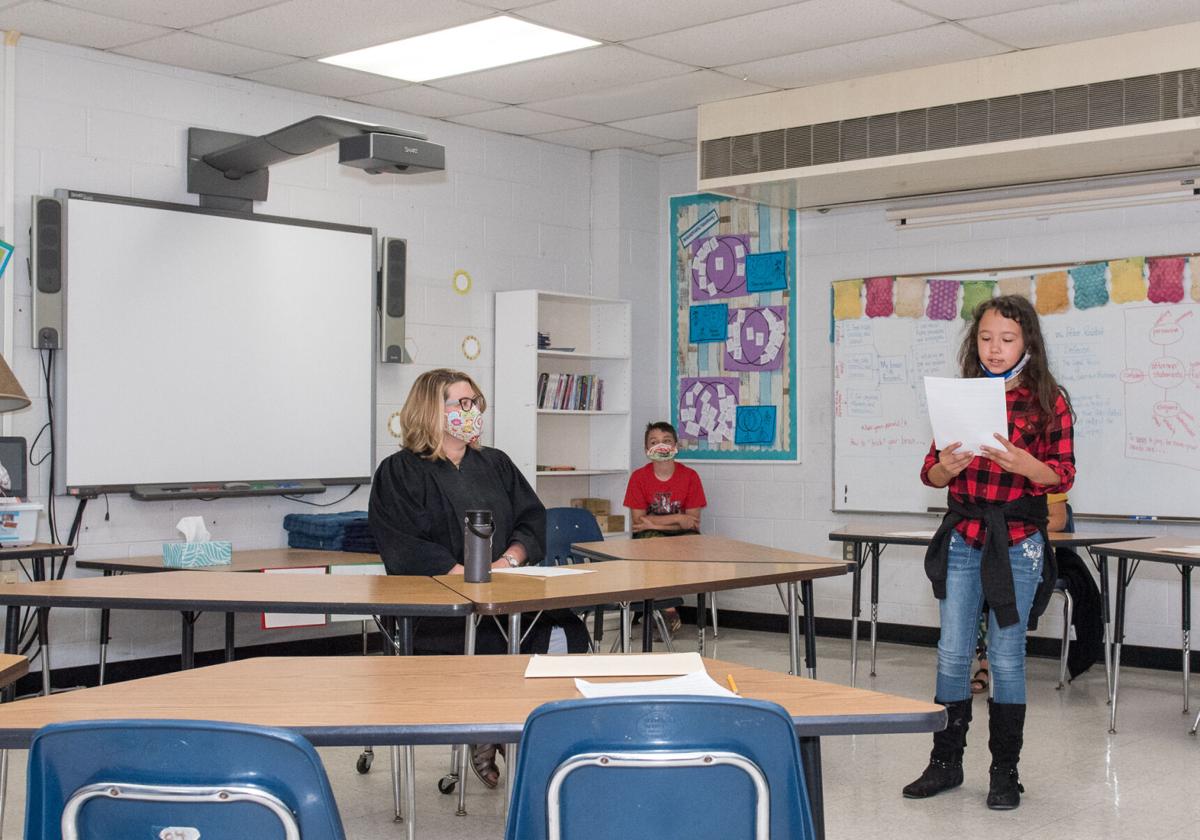 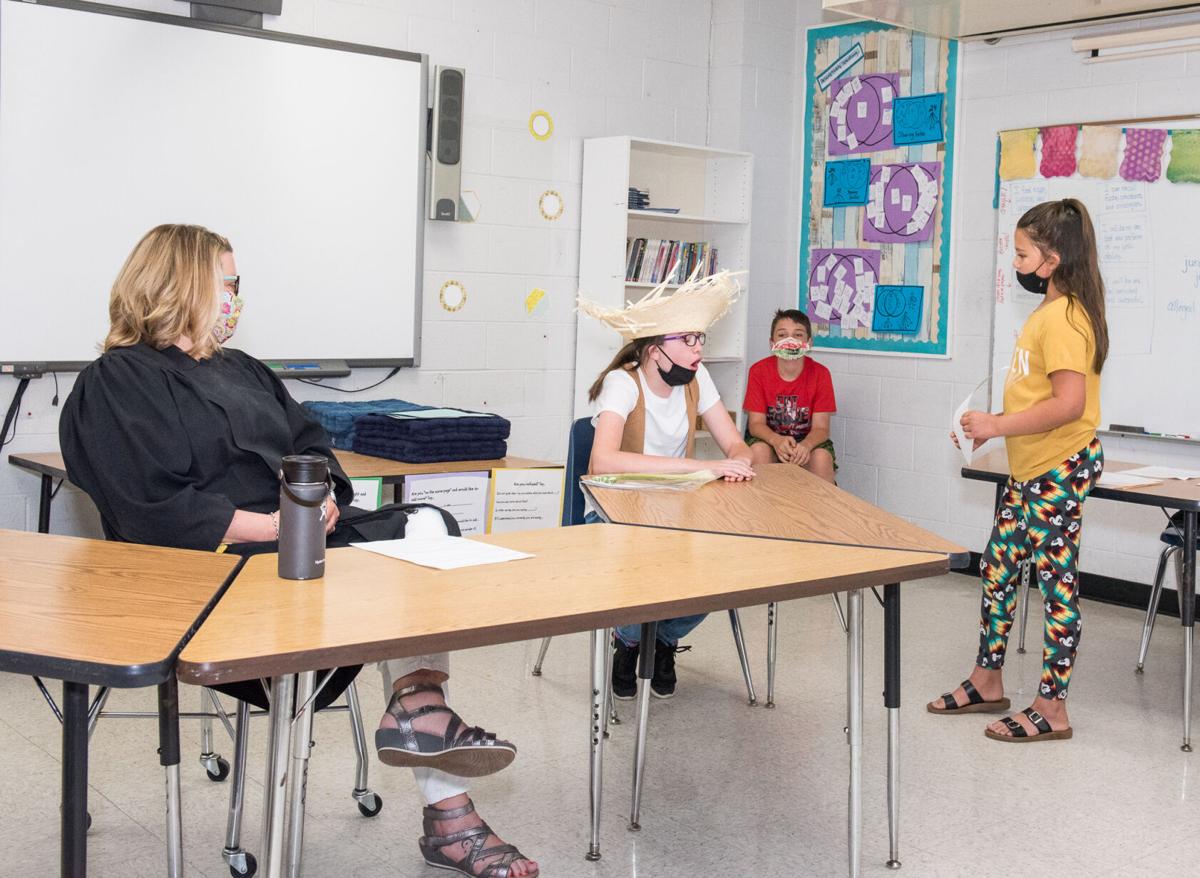 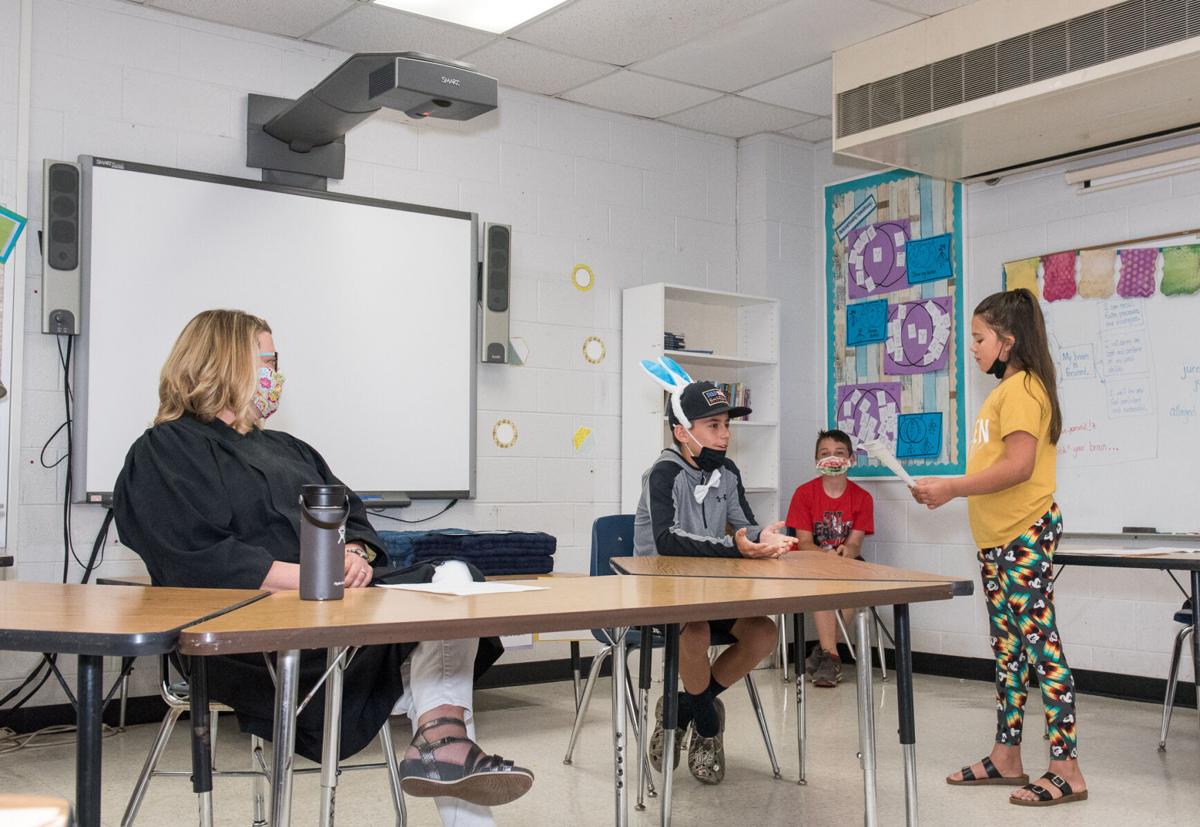 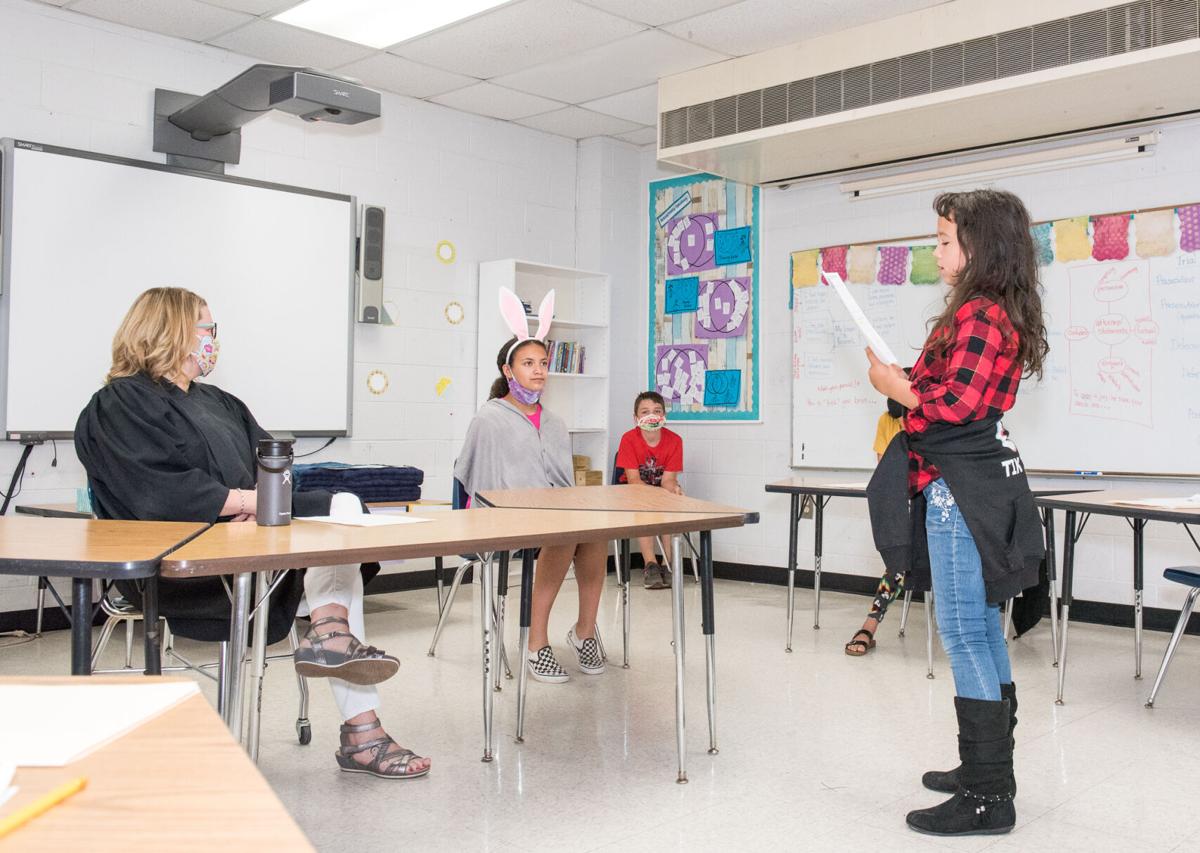 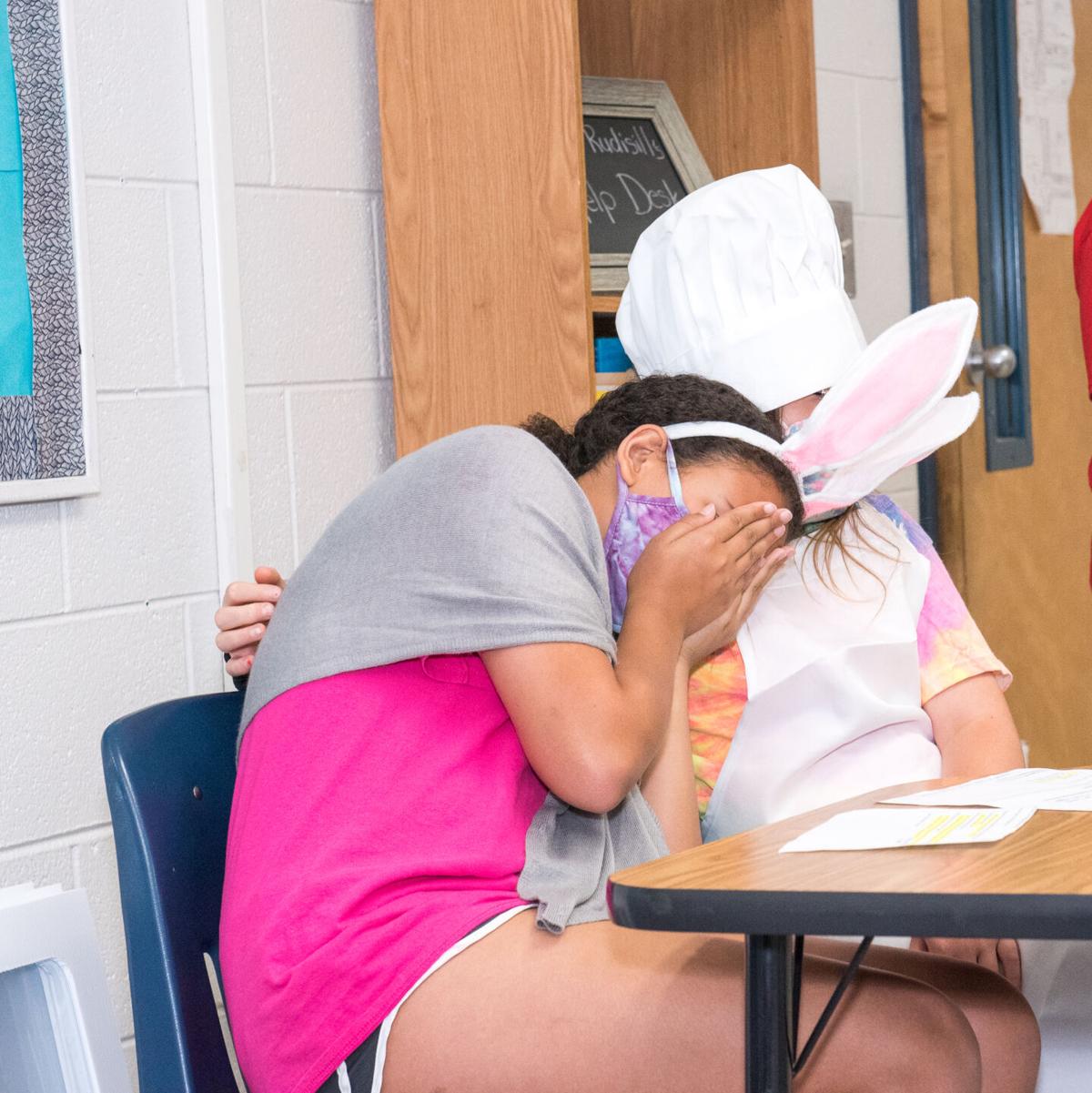 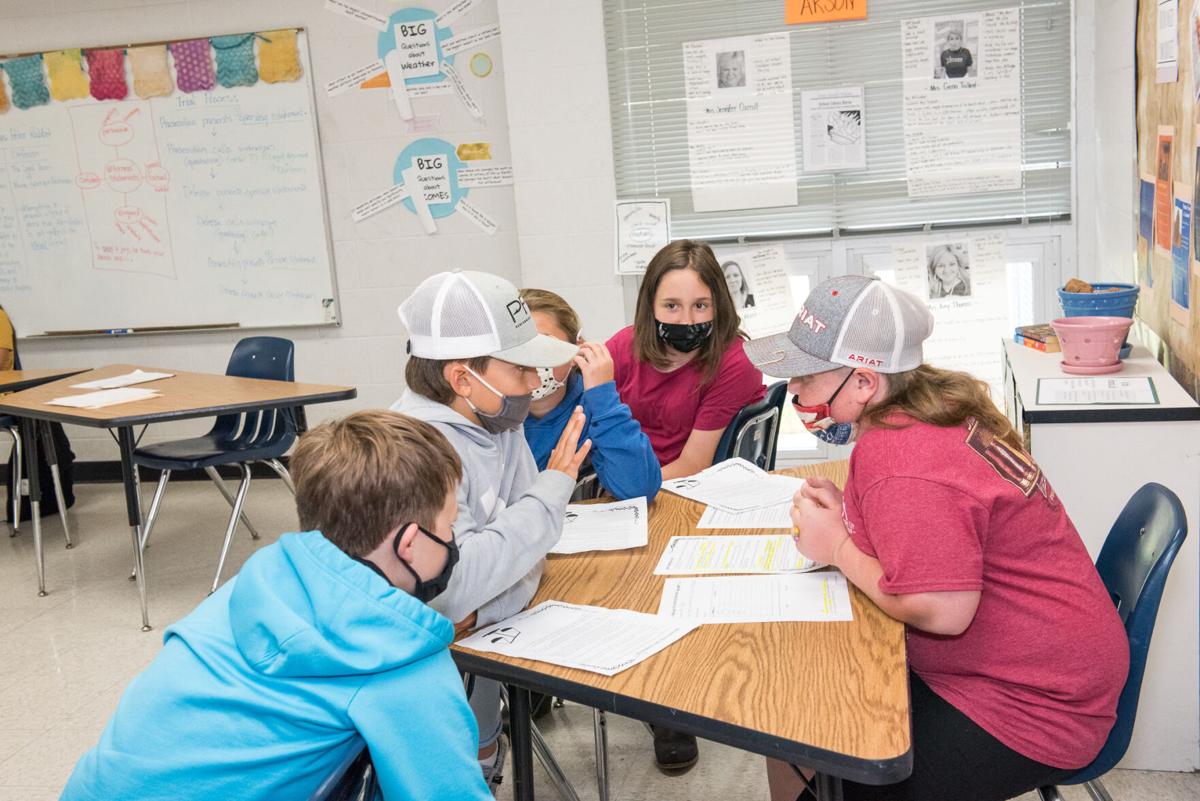 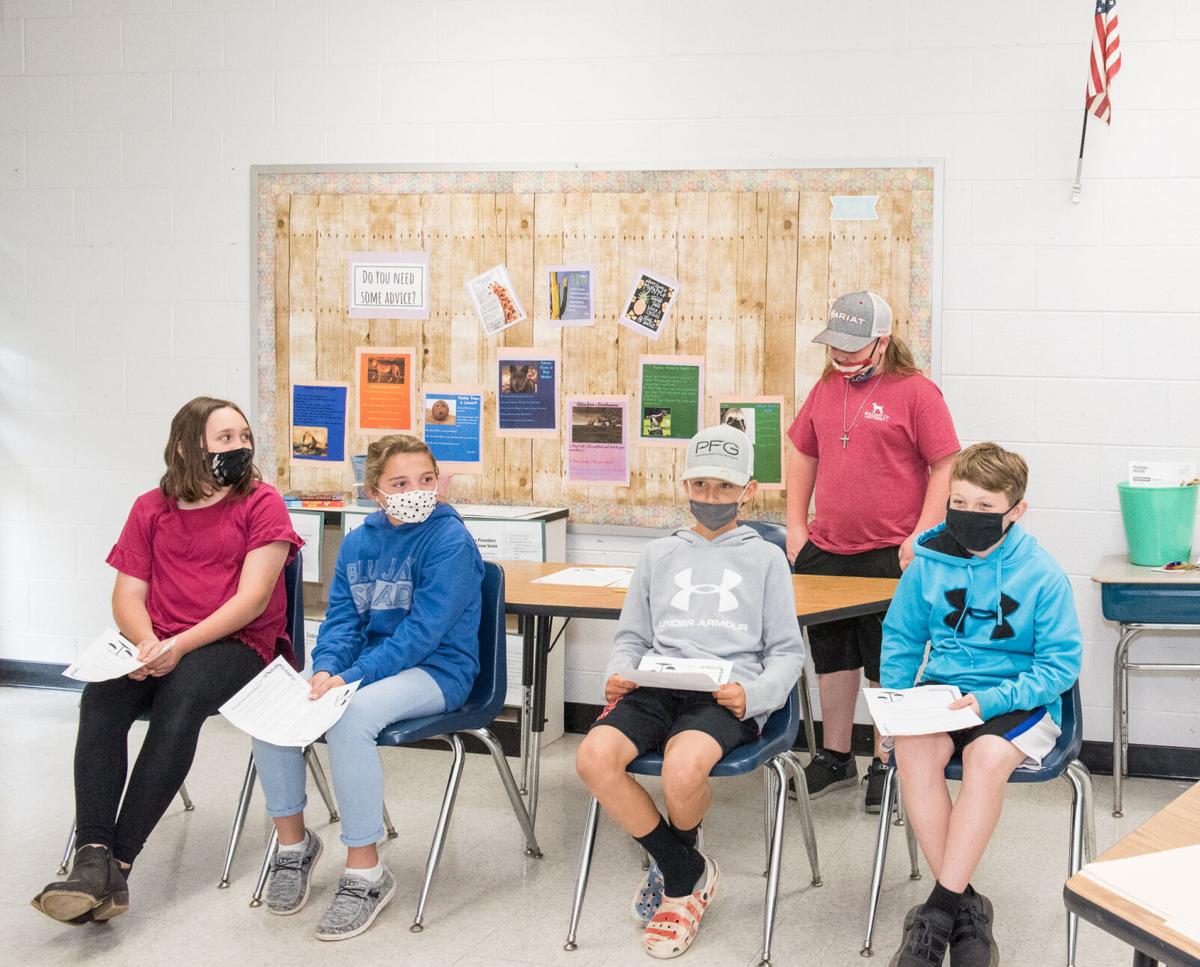 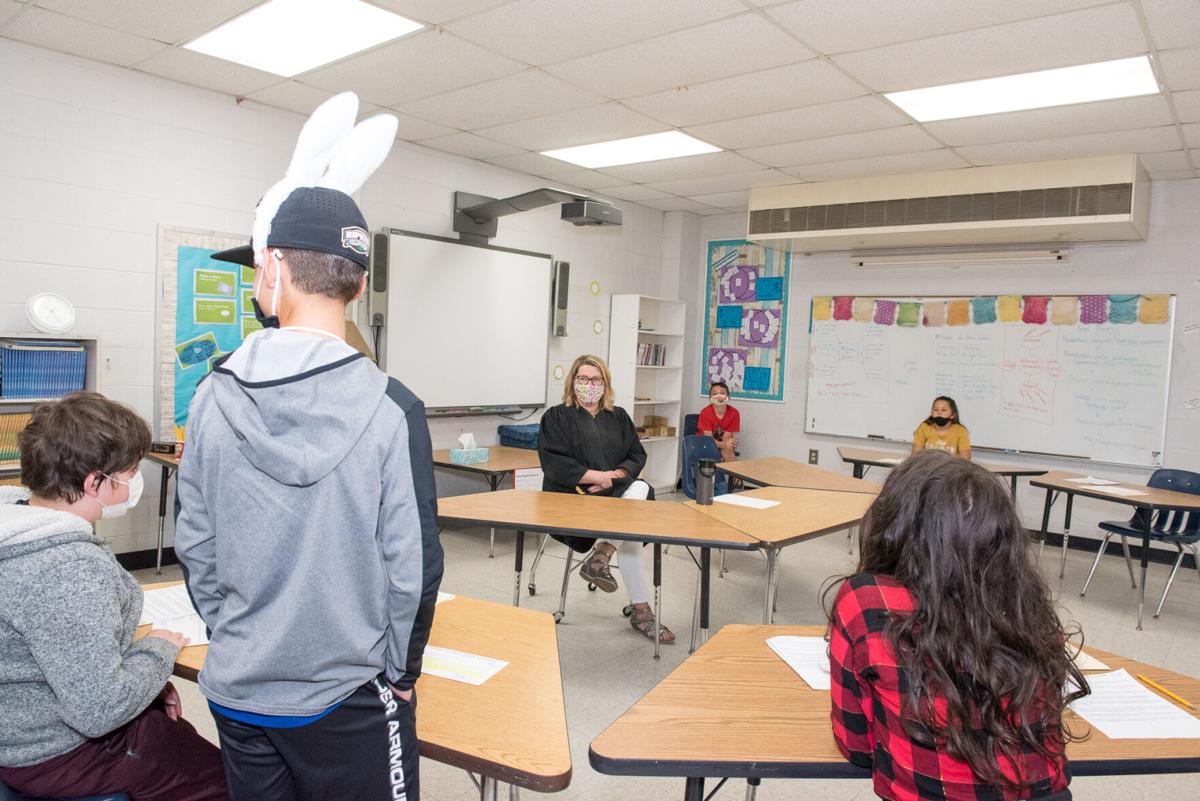 In a trial presided over by Judge Meredith Shuford, Peter Rabbit was found guilty of criminal charges. Because this was his first offense, instead of jail time, the young rabbit received a sentence of community service.

Fourth and fifth grade students in Kelly Rudisill’s academically or intellectually gifted class read various fairy tales and chose one to use for a mock trial.

“They researched felonies and misdemeanors and determined all sorts of things,” she said. “They chose the ‘Tale of Peter Rabbit’ and we’re prosecuting Peter Rabbit. The students all wrote their own scripts including opening and closing statements.”

“Rabbit-sized shoes and a tiny blue coat were found in different spots of Mr. McGregor’s garden,” she said. “Also, a broken flowerpot was found by the window in Mr. McGregor’s tool shed.”

Peter, knowing that he was guilty, ran as fast as he could away from Mr. McGregor, she continued. Additionally, when Peter left from the fir tree, he was dry. His fur was wet and damp when he came back, suggesting that he was indeed the one who broke that pot.

“Peter caused other problems, too,” she said. “Since he went in the garden, another member of the community entered too, trespassing alongside Peter. There are barren patches of dirt where Peter ate (or, rather, stole) the vegetables that were once planted there. Peter’s mother is aware of her son’s crimes. She did not allow him to eat blackberries and cream with his siblings for dinner as a punishment for his actions.”

But there’s more to the story, which the defense attorneys, Ian Buchanan and Triniti Osborne detailed. Mrs. Rabbit, Peter’s mother, knew her child was mischievous but left him with no adult supervision. Mr. McGregor tried to murder Peter with garden tools, just like he did to Peter’s father.

“All because a poor bunny needed a bite to eat,” Osborne said. “Peter is just a child and as such, does not know any better. Poor Peter was hungry and only wanted a small nibble to tide him over until a responsible adult came home.”

Defense also alleged that there was at least one other critter in the garden at the same time. Who knows which one ate the majority of the vegetables?

When called to the witness stand, McGregor admitted to killing Peter’s father and eating him in a pie. When called to the stand, Mrs. Rabbit said that Peter was her most mischievous child and that she left him in the care of older siblings. She also said that she put Peter to bed with no supper because he had been naughty during the day.

Could it be possible that the judge and jury would find McGregory guilty of murder or Mrs. Rabbit of neglect? After careful deliberation, however, the jury found Peter guilty of criminal trespass and robbery. Judge Shuford reprimanded Peter for trespassing, but because of his age and this was his first offense, his punishment was only community service.

“It was a pleasure to observe the students’ creativity in presenting the evidence to the jury,” she said. “By participating in the trial, they learned to consider the different prospective of people involved from the mischievous and hungry Peter Rabbit to the hardworking farmer, Mr. McGregor. Understanding that the courts resolve disputes, as a function of our government, is an important lesson for citizens of all ages.”