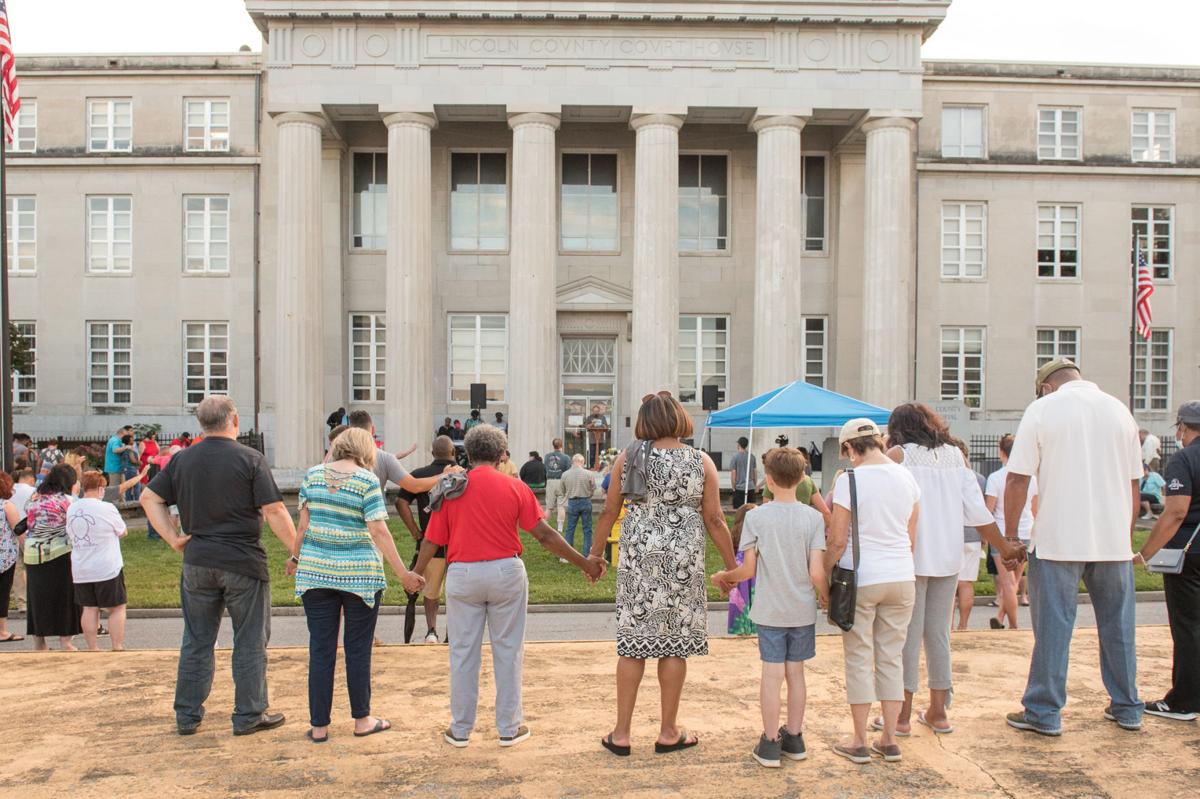 Towards the end of the prayer service held on the steps of the Lincoln County Courthouse Wednesday night, those who assembled joined hands during the benediction. 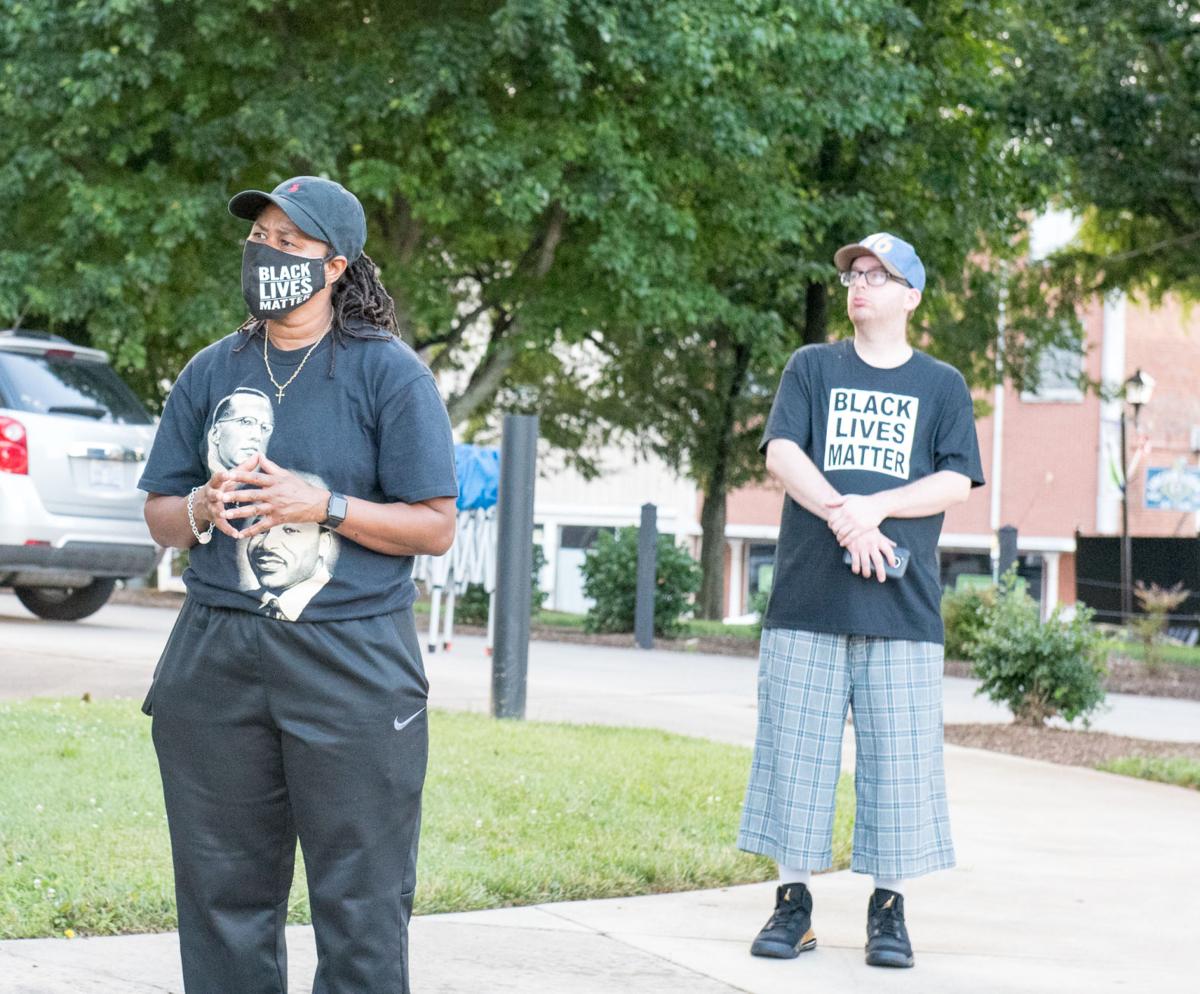 A very diverse group of people joined together to hear a message of hope. 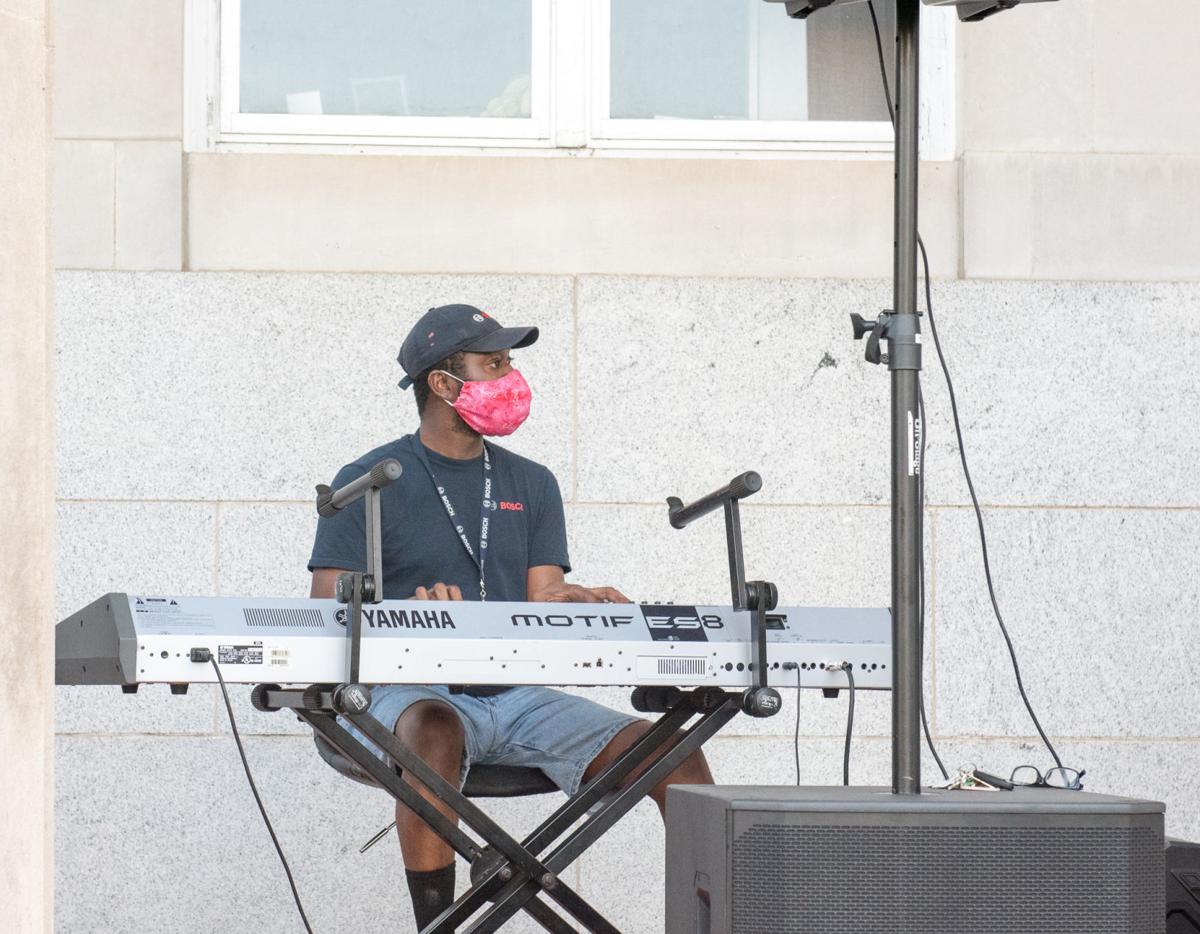 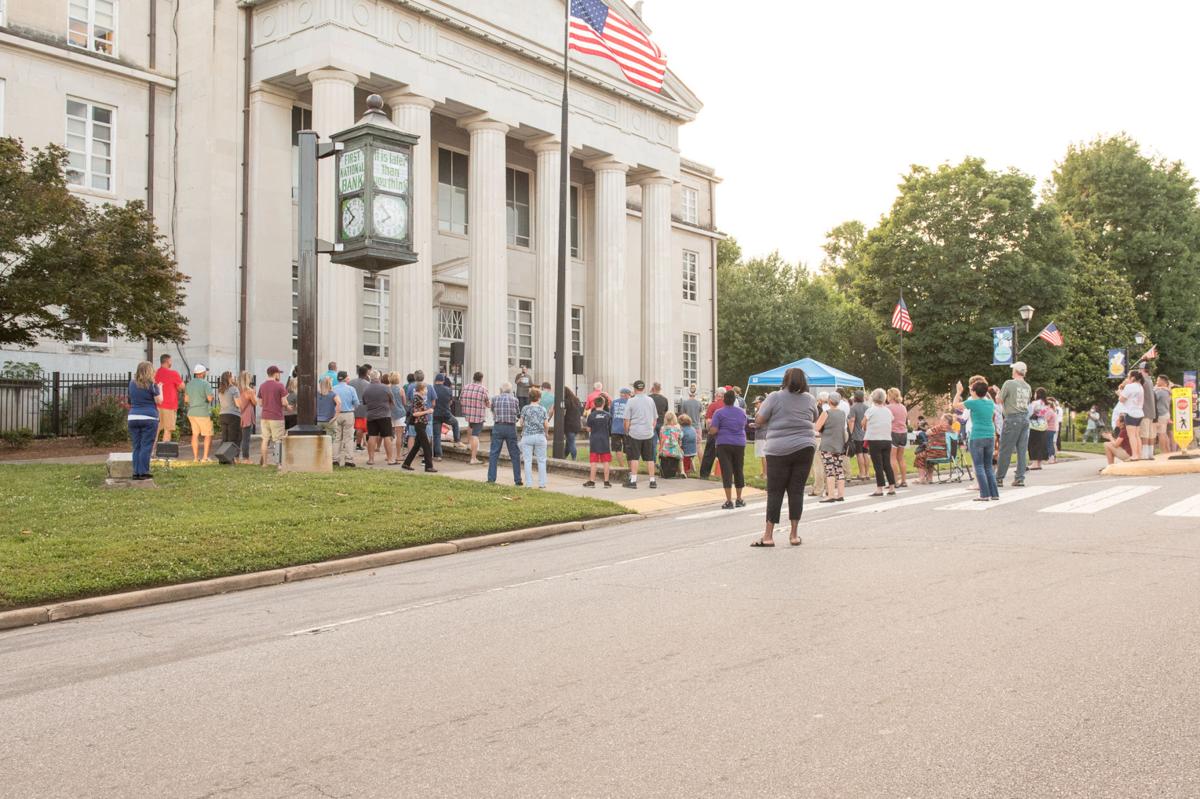 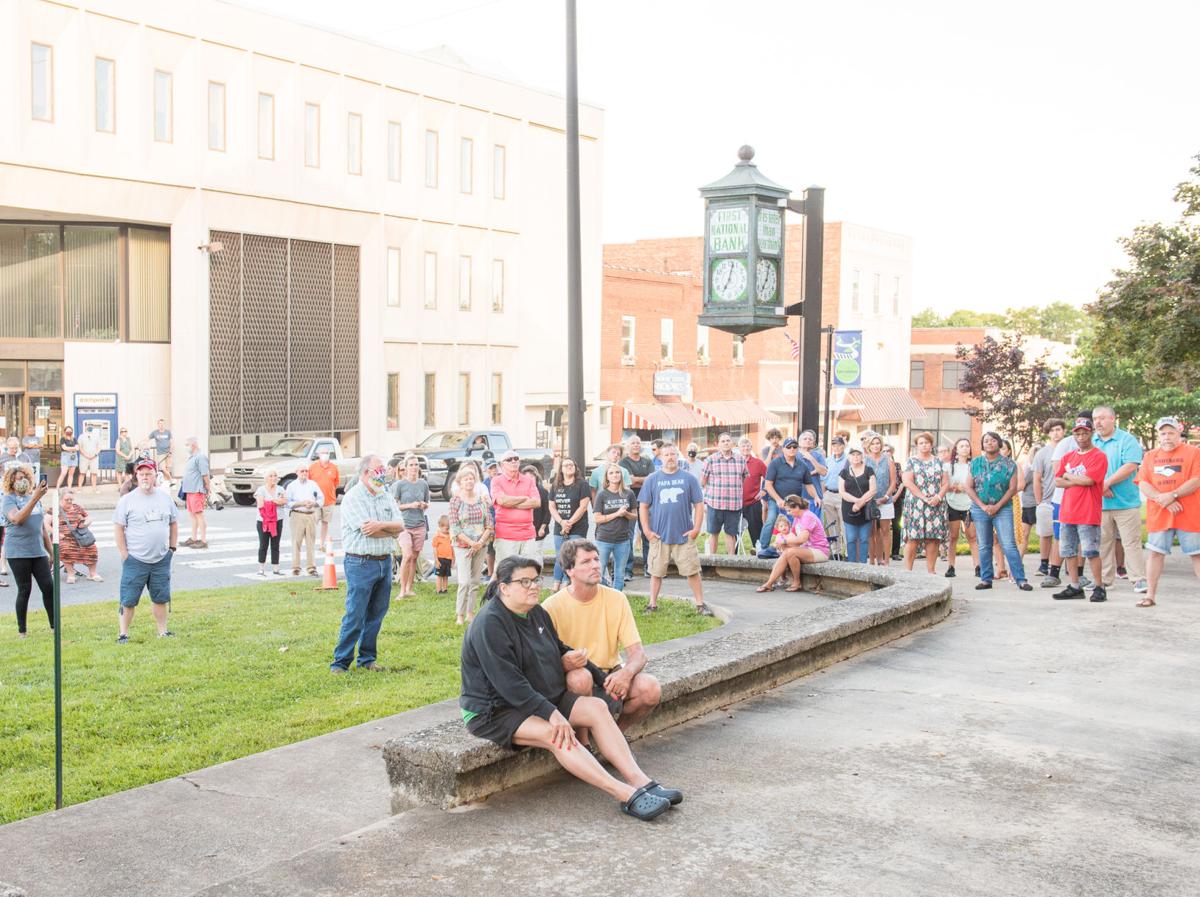 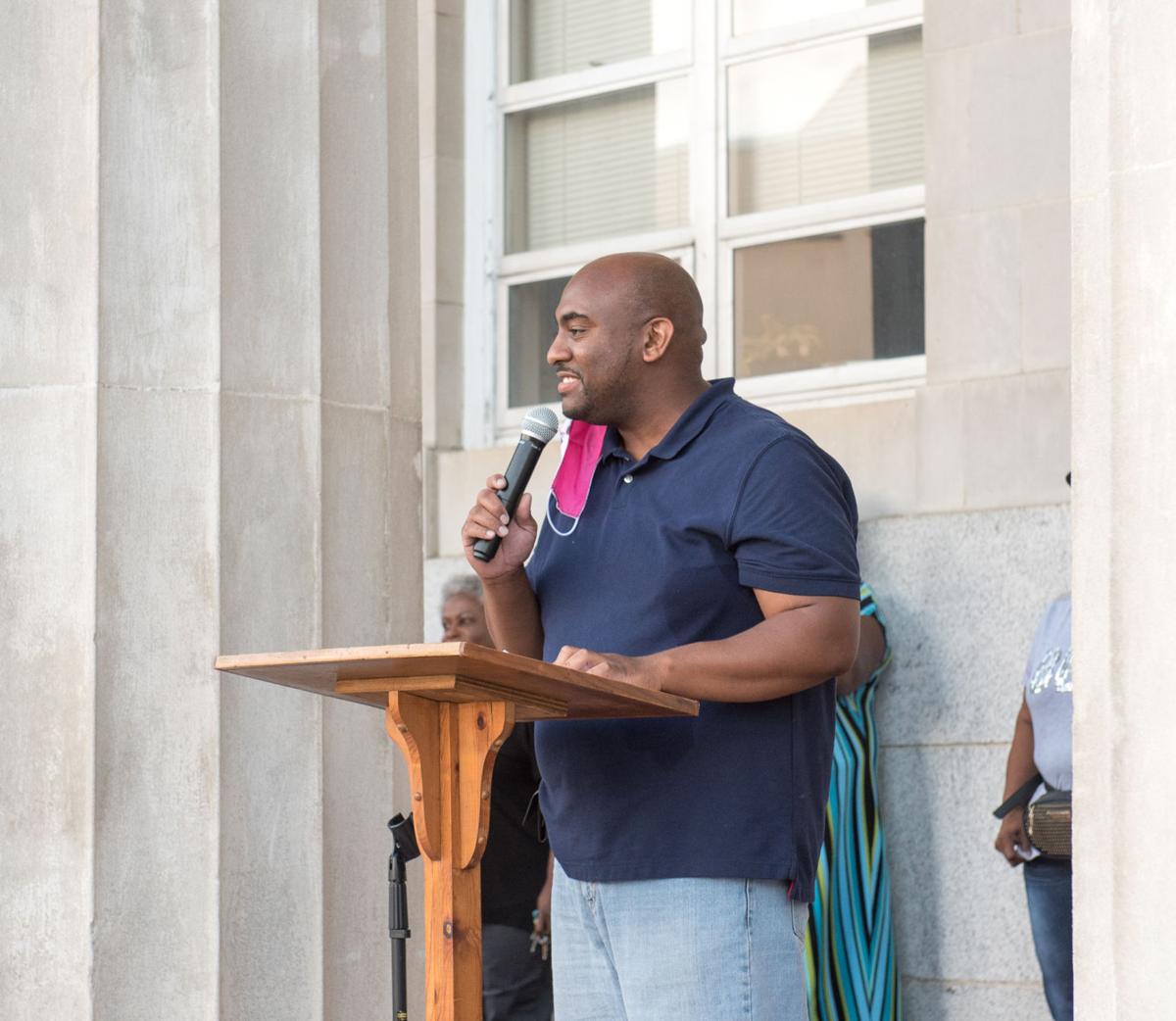 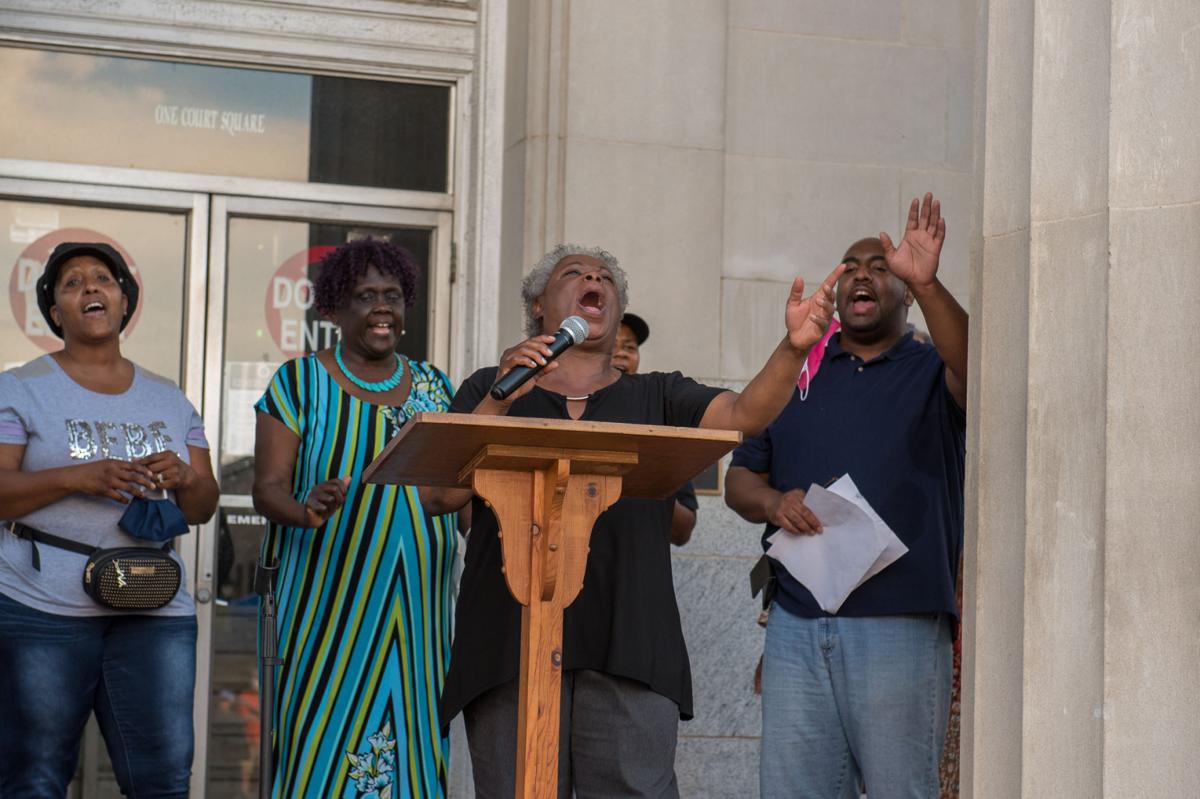 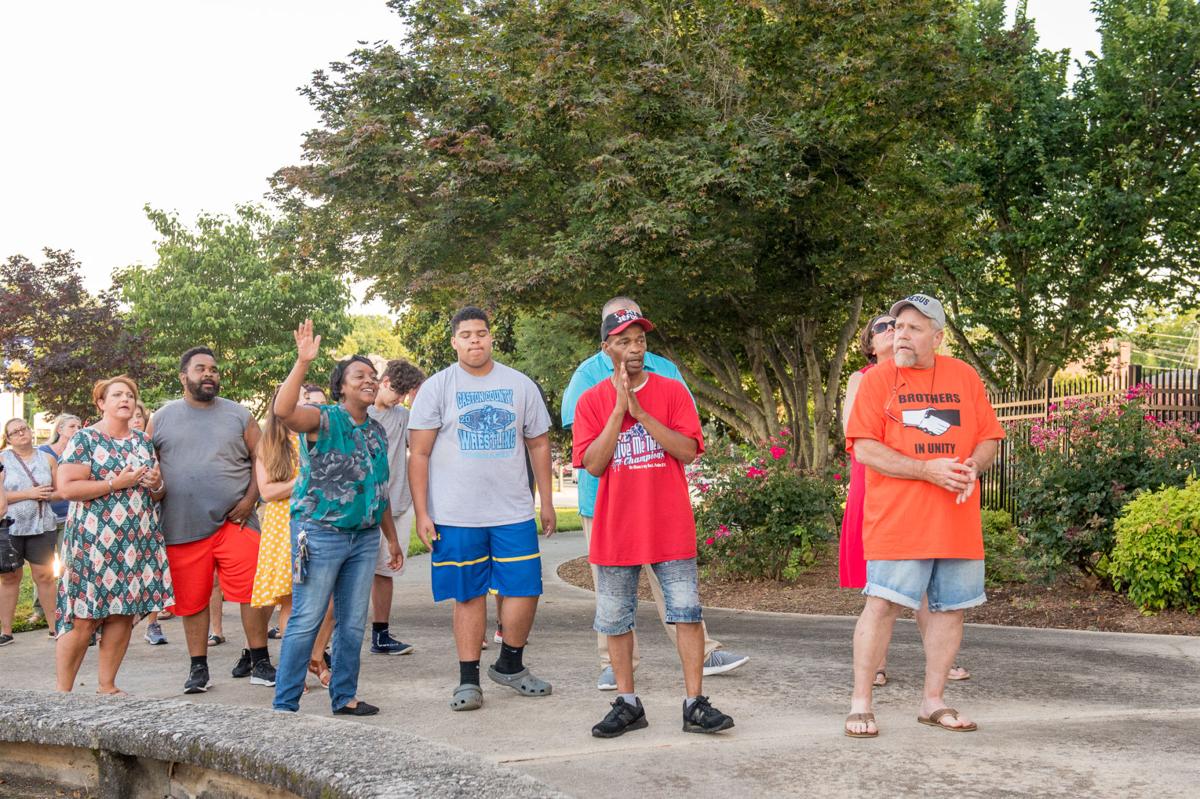 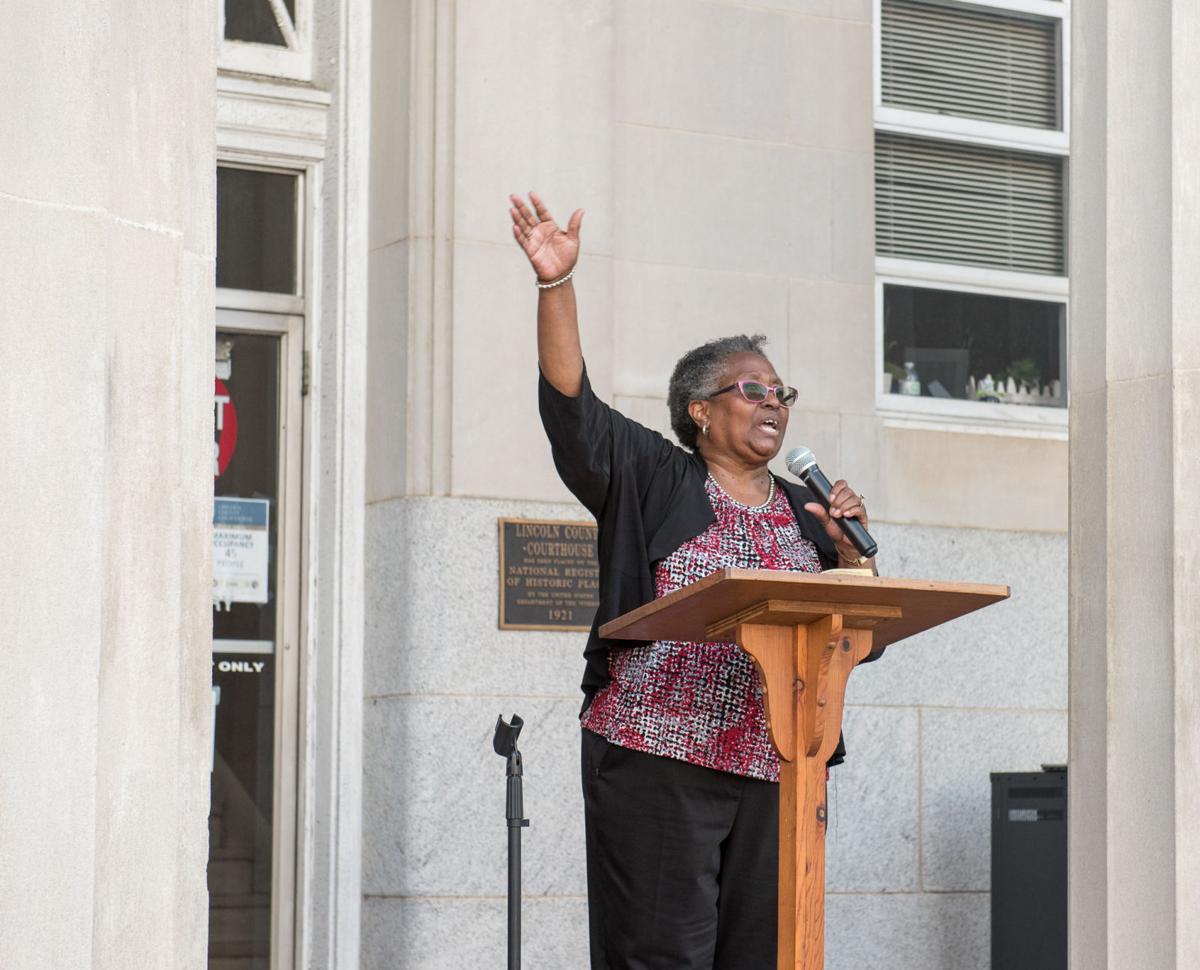 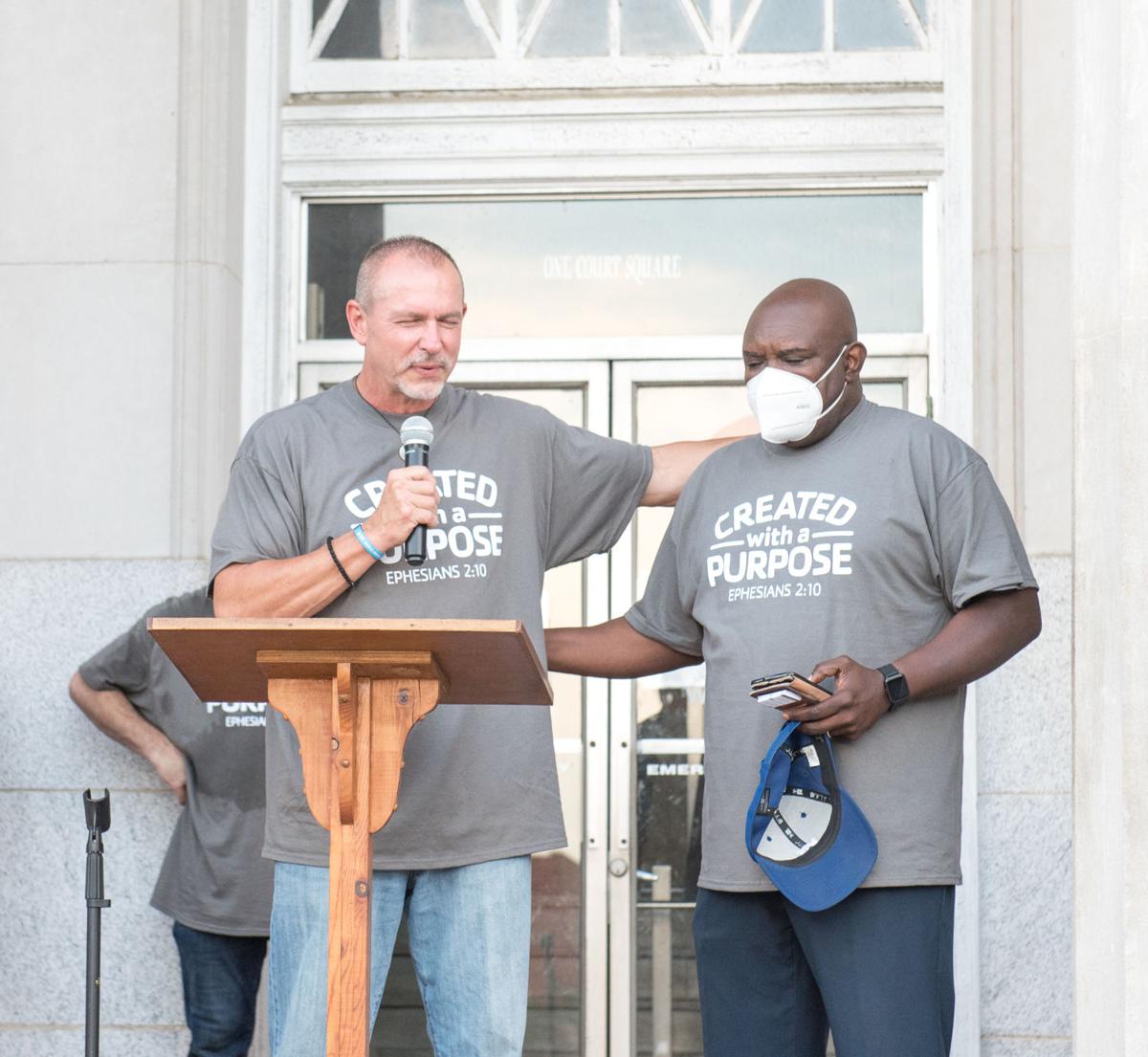 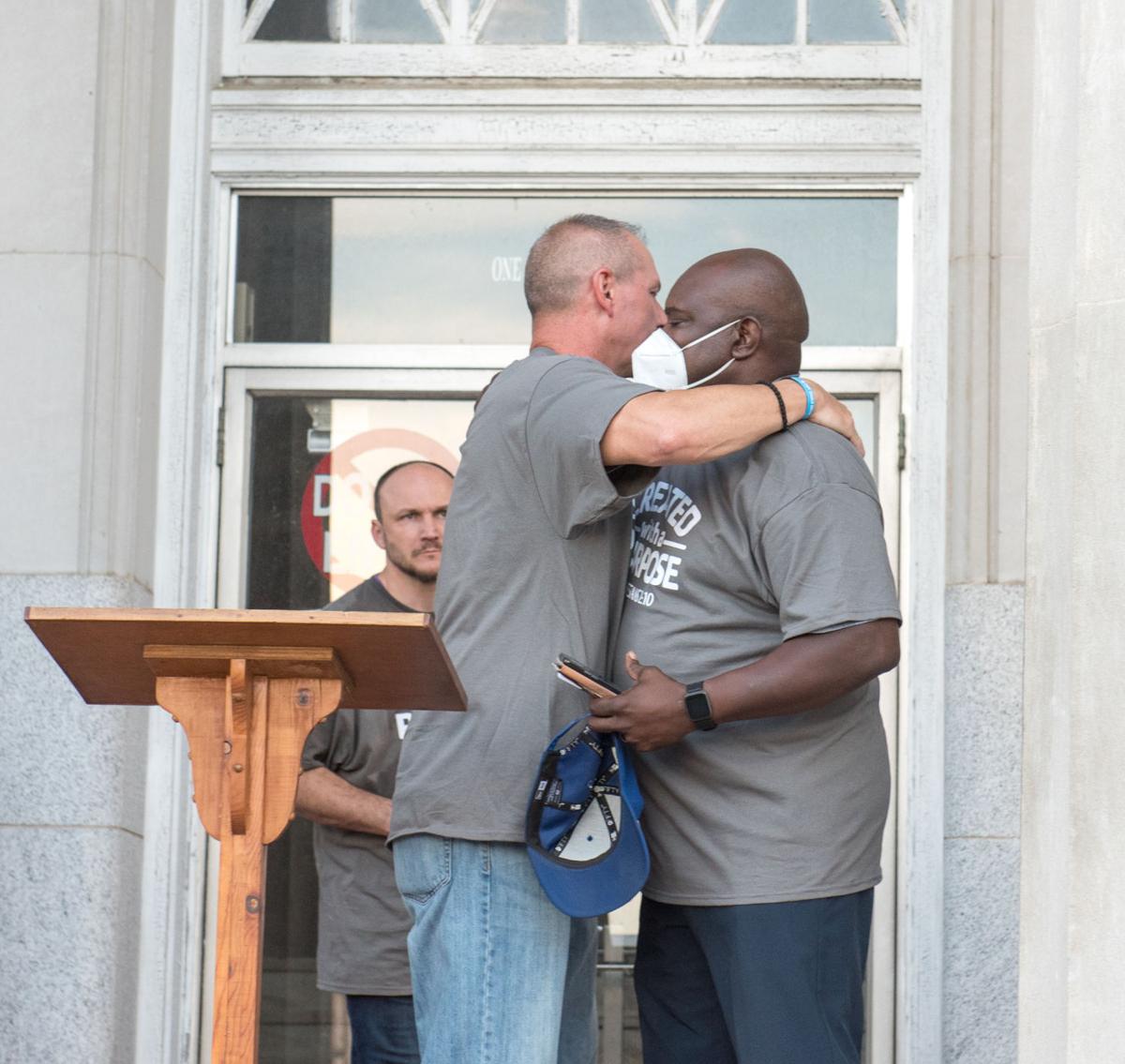 Towards the end of the prayer service held on the steps of the Lincoln County Courthouse Wednesday night, those who assembled joined hands during the benediction.

A very diverse group of people joined together to hear a message of hope.

It seemed rather serendipities that not long before a prayer service promoting unity was to be held on the steps of the Lincoln County Courthouse Wednesday night, a double rainbow appeared.

The event was initiated by Anthony “Jamel” Farley who said that it began with a conversation that started here and there. Farley, along with a group of local pastors and ministers worked together an event which brought a widely diverse group of people together in prayer.

“We were listening to the cries of the people who were crying out for justice,” he said. “We decided that there was no better way of changing things than to come in prayer. We’re hoping that minds, hearts and attitudes change for the better. With all this going on right now, we have to show people that there’s still hope, and we have to put our trust in the one above.”

In the entire week, Sunday is the most segregated day, Farley noted. Everyone goes to their own selective churches and rarely are there ever overlaps.

“We have to break this mentality because at the end of the day, there’s only one Heaven,” he said. “We have to live like that. We’re not trying to throw politics or religion on anyone.”

On Wednesday night, Lincolnton’s diversity was on display as a large gathering listened to messages from several local pastors and enjoyed musical selections.

Farley gave a passionate introduction at the service saying that we must move that mountain of hate, racism, doubt and fear.

“I want to know,” he said to the crowd. “Can you hear me now? Is there anyone that can hear me now?”

Gwen Cobb, the associate minister at Providence Missionary Baptist Church was the first to speak said that she’s heard many of her white brothers and sisters say that there’s no racism.

“We can’t start healing until we admit there’s a problem,” she said. “We as a black or brown people are tired of seeing, for the same or less kind of crime, the black and brown people get twice as many years of punishment while our white brothers or sisters get probation.”

Pastor Mike Devine from Covenant Church in Lincolnton and Bishop Franklin Lowery from Gold Hill Missionary Baptist Church came together to the podium next. Devine and Lowery have a long relationship beginning when Devine was in high school. Lowery was his basketball coach.

Devine told the story of how he and Lowery went to the jail together to visit with a young man who was on suicide watch. Devine needed help from Lowery, who was a magistrate at the time, getting into the jail. Lowery met him at the jail 15 minutes later.

The young man, who was an African-American, was walking from side to side in his cell continually banging his head on the wall.

“I didn’t know what to do but to pray so I just sat down in front of him and began to let him know that I loved him,” Devine said. “I’m glad Bishop Lowery was there because nobody would have believed what happened next. Within five minutes, that man went from trying to kill himself, blood flowing out of his head, to laying on the floor crying out to God to heal his soul.”

Devine went on to say that after they left the jail, he told Lowery that he had been feeling distraught about the legacy of his race and slavery.

“What the Lord has shown me over the past couple months is that if you could actually take an infrared camera and fly over the United States of America in 2020, it looks very much like it did in 1864,” he said. “By that I mean that we still have black neighborhoods that look like slave villages. I’m not saying that in a negative way – what I mean is that we’re still separate. I don’t think that’s what God would have us look like. Our forefathers did some incredible damage to this nation and I don’t like it any more than you. What I can do is stand up now and ask for forgiveness for what our ancestors did. Part of the healing will be to ask for forgiveness. If you do this, something supernatural will happen our relationships in Lincolnton.”

Lowery followed Devine’s message up with one of his own on repentance and forgiveness.

“I must confess that we have hid under the umbrella of religion and not relationships with one another,” he said. “Can you imagine what would happen if on every Wednesday and every Sunday we would gather like this under an open Heaven and give God glory? It’s not going to happen until we come out of denial and acknowledge that racism exists.”

According to Pastor Joey Williams of Daystar FWC Church of God, all we needed now was “love sweet love.”

Rev. Nellie Kirkland from AME Zion in Lincolnton closed out the service with the benediction.

It seems, at least in Lincolnton, the fire has been lit and maybe there will be an end to racism, more acceptance, repentance, forgiveness and love, sweet love. Maybe in time, there will be more diverse gatherings held under the open sky in downtown Lincolnton.