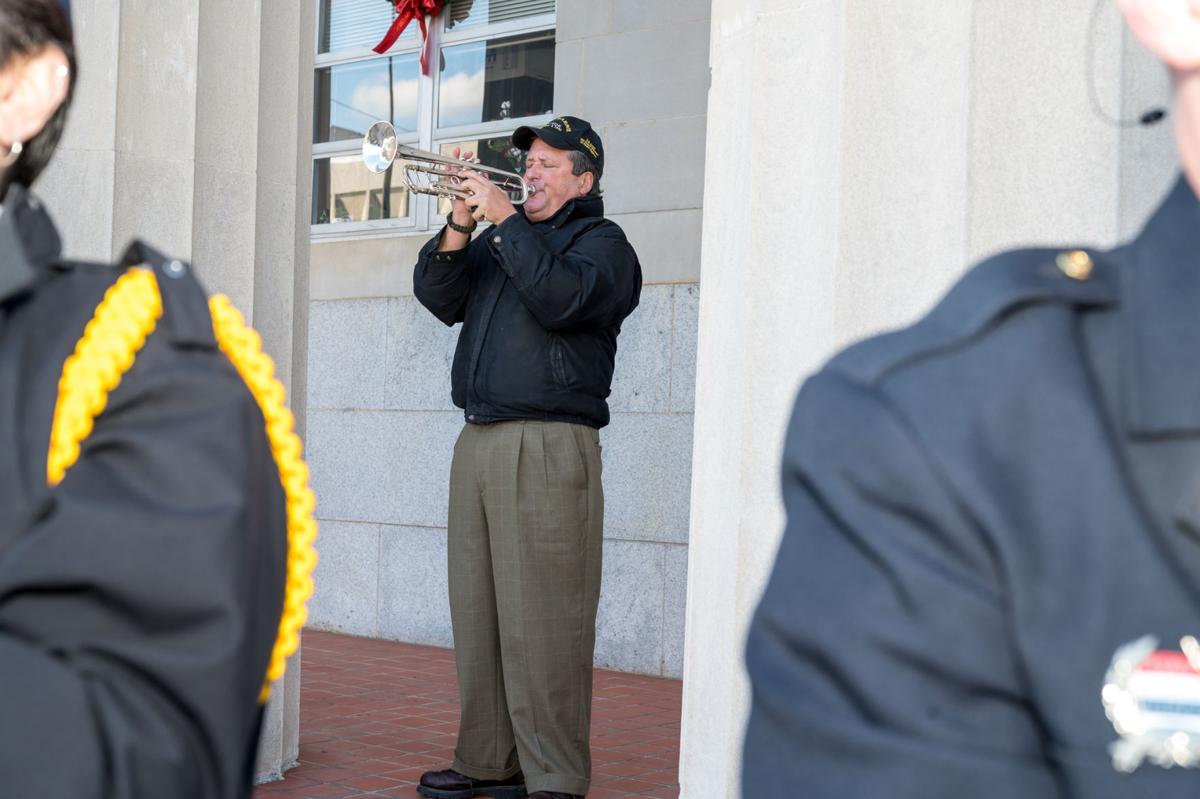 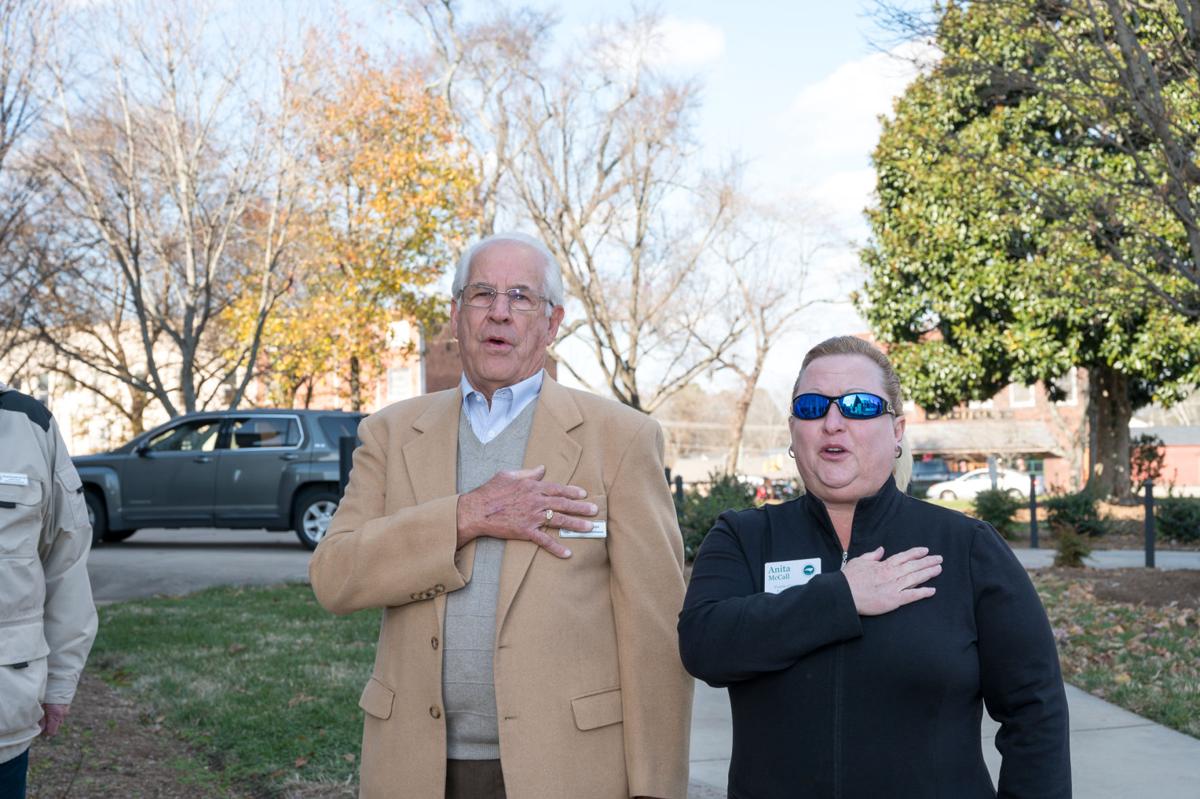 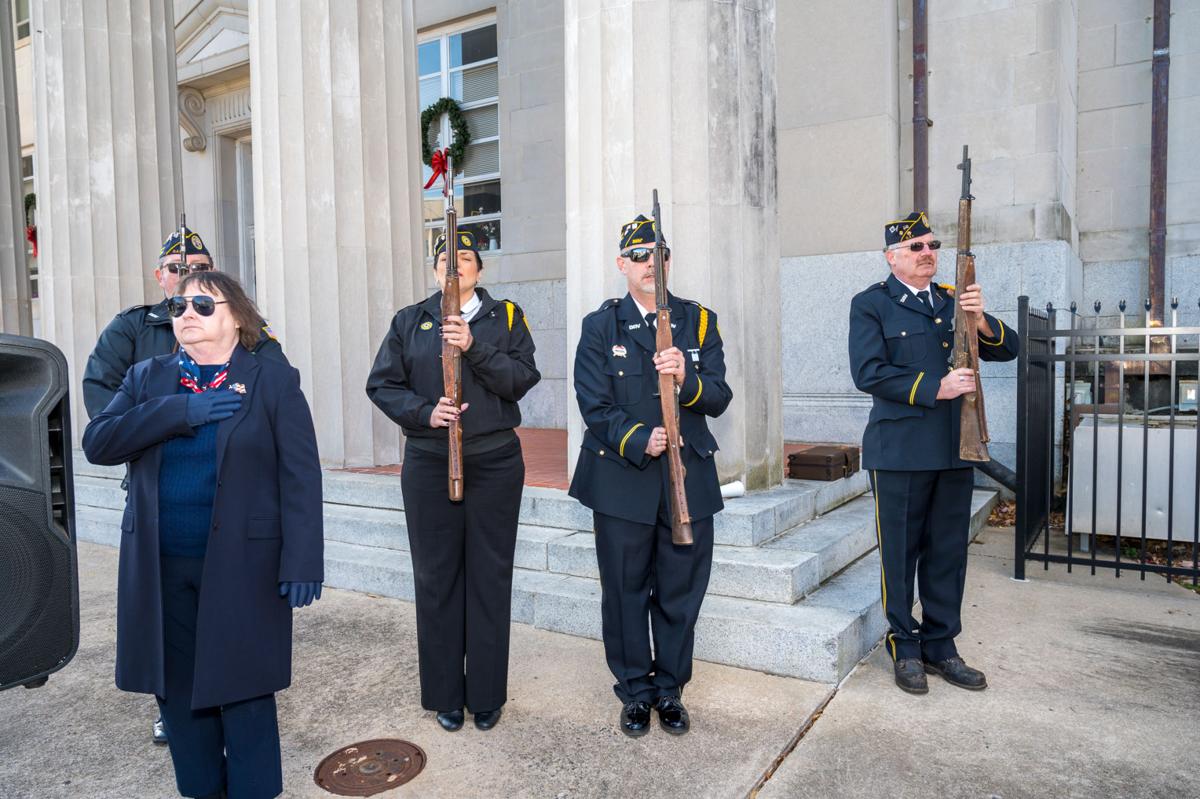 Linda Hoyle (left) who has been preserving, for over a decade now, an ever-dwindling group of Lincoln County World War II veterans known as the Last Man’s Club led the ceremony on Saturday.

Linda Hoyle (left) who has been preserving, for over a decade now, an ever-dwindling group of Lincoln County World War II veterans known as the Last Man’s Club led the ceremony on Saturday.

It’s been 78 years since a sneak attack on the U.S. Pacific Fleet’s base at Pearl Harbor brought the United States into World War II. A group of veterans, community members, city and county officials convened in front of the Lincoln County Courthouse on Saturday to honor those 2,403 men and women who lost their lives that day.

In 2011, a proclamation was issued by Mayor John Gilleland that the City of Lincolnton would forever observe Dec. 7 as Pearl Harbor Day, but area veterans had been gathering at the courthouse on Dec. 7 for years before the proclamation was issued. The ceremony was led by Linda Hoyle who has been preserving, for over a decade now, an ever-dwindling group of Lincoln County World War II veterans known as the Last Man’s Club.

No World War II veterans were able to attend this year. Hoyle thought that there may have been some watching the ceremony from their cars, but given they’re all in their late 90s, standing outside in the cold is out of the question for them.

“My father and four uncles fought in the South Pacific,” said Lincoln County Commissioner Richard Permenter. “They all came home and went about their work, rarely talked about it and it wasn’t until I came home from Vietnam that they felt comfortable telling me about their experiences. The important thing is they came home, went back about their business, just as they did during the war. They were the greatest generation of all. Our American servicemen saved the world from incredible tyranny and brutality and made it free. As it stands now, the holiday season seems to begin before Halloween so as the dates get older and older, people remember Dec. 7 less and less. I’ll never forget it.”

Lincoln County commissioners Anita McCall and Milton Sigmon sang the National Anthem at the ceremony. As he has in the past, J. Cain Leonard shared memories of his late father, Corp. Joe Leonard, who was stationed at Schofield Barracks, which was also attacked during Pearl Harbor.

“I never served in the military,” he said. “I’m what you call a beneficiary of those that did. It’s been 12 years since my father passed and I only get choked up during this Pearl Harbor ceremony. There’s something that deeply connects me to the military, even though I never served. Especially World War II and we’re losing a lot of those men and women every day. It’s called the greatest generation, but I think my father might disagree with that. I think he’d say that any person that has worn the uniform and put themselves in harm’s way is a member of the greatest generation.”

Prior to World War II, Leonard’s father was in the 34th U.S. Combat Engineers, later renamed the 1431st and did construction. He told his son that Pearl Harbor was a good place to be, at least it was until the bombing. Leonard remembers him telling the story of the attack. There was a group of people from the combat engineers who were up on a roof doing repairs. The squadrons of “Zeros” (Mitsubishi A6M Zero, a type of plan the Japanese used during WWII) came in behind the island over the mountain range.

“The servicemen were waving to them,” he said. “They thought they were ours. Of course, the Zeros started peeling off and strafing them and that didn’t last long. My father was stationed at Schofield Barracks and the first bullet of World War II was shot in my father’s barracks and it hit above the urinal. Luckily, he wasn’t there at the time, he was on detached assignment at a place called Fort DeRussy where had a pretty good view of the attack, unfortunately.”

Leonard’s father was stationed years later to help repair the damage done during the attack.

After the three-volley salute fired by members of the Disabled American Veterans of Lincoln County Chapter 53, Leonard played “Taps.”