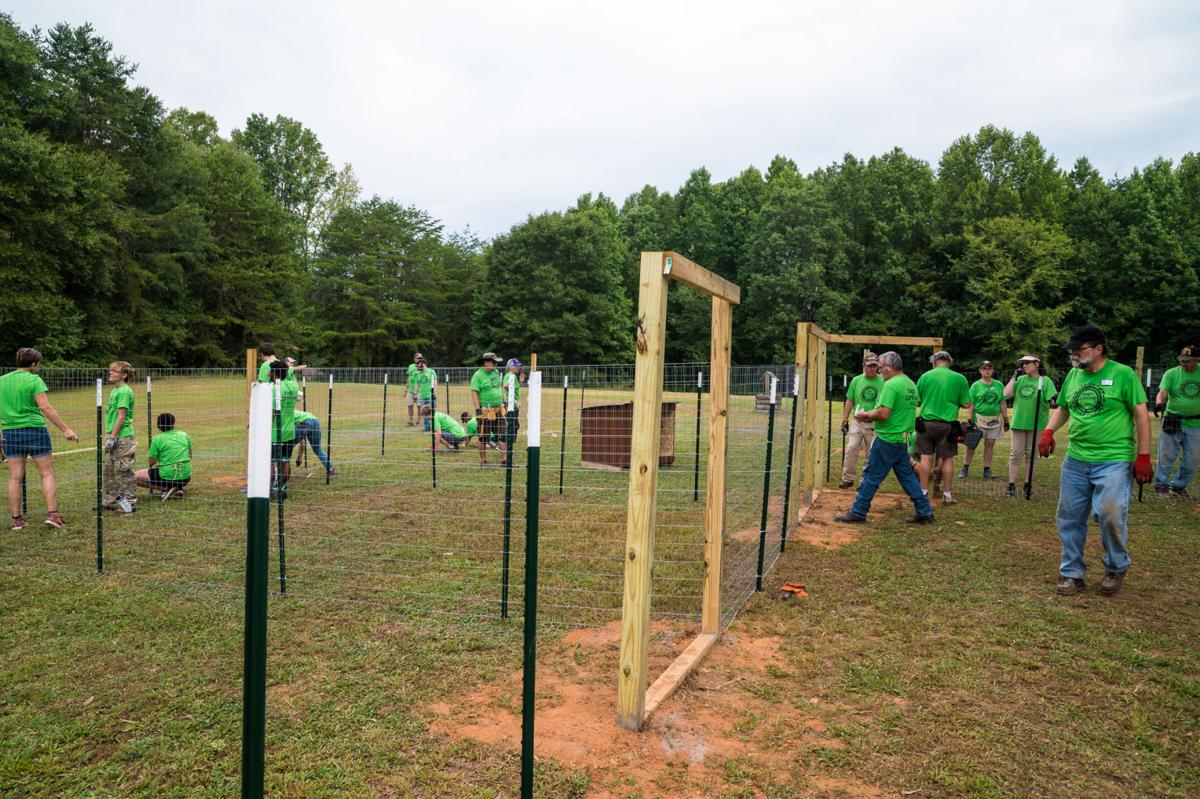 Volunteers from the Carolinas Unitarian Universalist Animal Ministry work to build a fence to free five dogs from chains on Saturday. 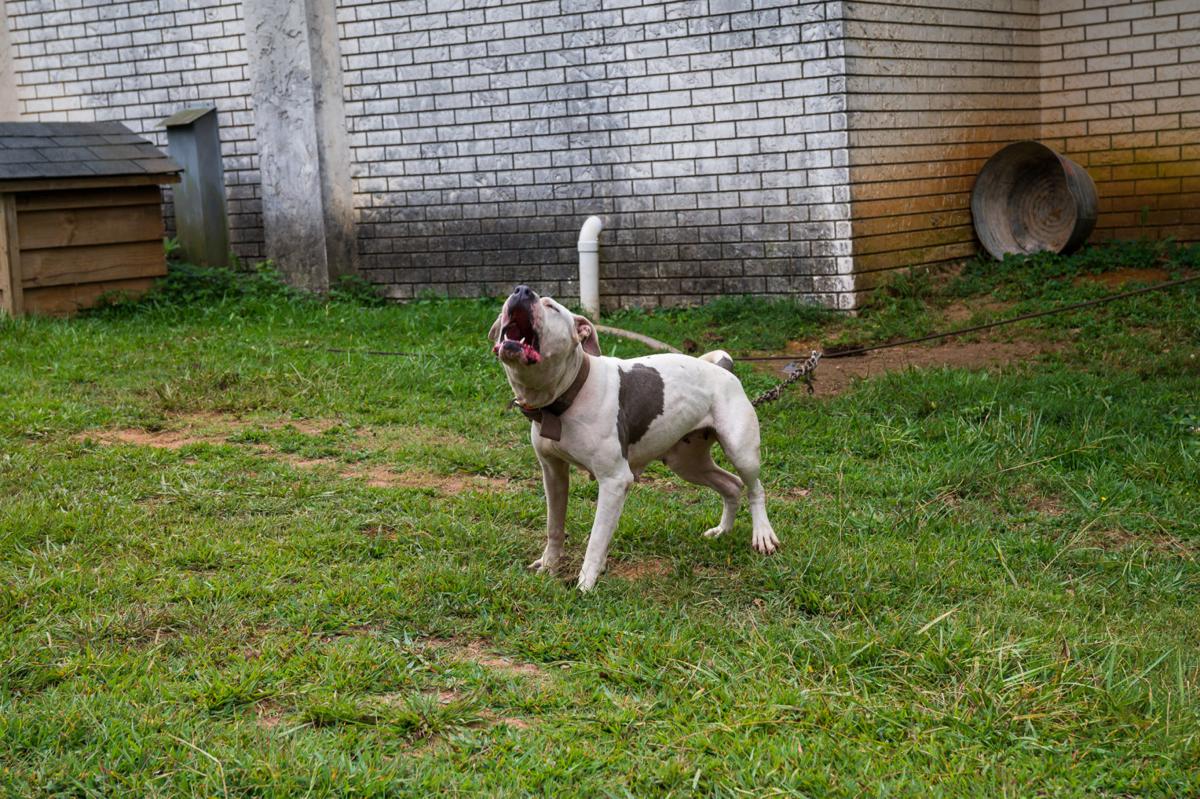 Princess, who has been confined to life on a chain, was given a new fenced-in enclosure on Saturday by the Carolinas Unitarian Universalist Animal Ministry. 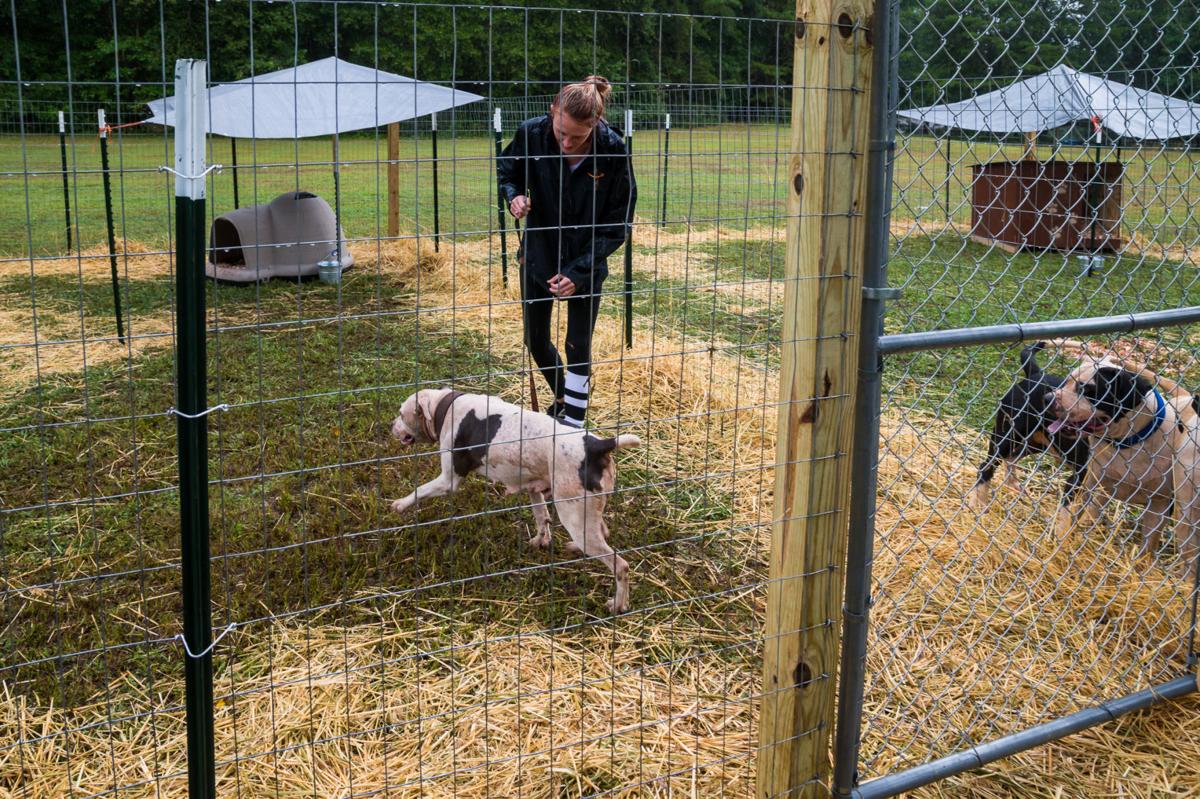 Princess, who has been confined to life on a chain, is released by Lauren Hester into her new fenced-in enclosure which was built on Saturday by the Carolinas Unitarian Universalist Animal Ministry.

Volunteers from the Carolinas Unitarian Universalist Animal Ministry work to build a fence to free five dogs from chains on Saturday.

Princess, who has been confined to life on a chain, was given a new fenced-in enclosure on Saturday by the Carolinas Unitarian Universalist Animal Ministry.

Princess, who has been confined to life on a chain, is released by Lauren Hester into her new fenced-in enclosure which was built on Saturday by the Carolinas Unitarian Universalist Animal Ministry.

Five dogs were unchained on Saturday in Lincolnton. Volunteers organized through the Heart of the Carolinas Unitarian Universalist Animal Ministry built what is their largest fencing project to date. Chappie, Cletus, Princess, Joey and Blu now have the opportunity to run and play in this new enclosure with adequate shelter and toys to play with. The dogs are owned by Lauren Hester and her father, Jimmy Hester.

“It’s a huge blessing,” Lauren Hester said. “We rescued two of these dogs, then ended up with puppies so that’s why we have so many. For them to get to have this new space will be so good for them.”

Heart of the Carolinas, which is based out of Lincoln County, was organized by Claudia Winkle Perkinson, her husband, Alan, and Jim Price.

“We were doing other things like educational programs for kids and field trips,” Perkinson said. “Then we decided there was a need to unchain dogs. It’s grown from there.”

The organization has “unchained” 47 dogs this year. Not all of the dogs are technically chained, some are living in less than ideal environments and some are running loose.

“We’ve got another build coming up where there’s nine dogs,” Perkinson said. “One of them is on a chain and the rest of them are loose.”

Leaving a dog chained can make them aggressive, Perkinson said, and it can also be painful for the dog, they are usually chained far away from the house so they don’t get a lot of attention and don’t often get much exercise on a chain or are able to play.

In order for residents to take part in this program, the dogs must first be spayed or neutered, a service which is done free of charge by Heart of the Carolinas. Unfortunately, there is sometimes reluctance on the part of some caregivers to have this done and Perkinson said that they will turn people down if they refuse to have their dogs spayed or neutered. Because of this requirement, not only is this organization giving dogs the opportunity for more enriched lives but they are also curtailing dog overpopulation in the county. While they are getting spayed or neutered, they are also brought up to date on their vaccinations.

The project that was done on Saturday was a divided enclosure because all of the dogs wouldn’t get along if they were housed in the same enclosure. It consisted of a total of 1,800 square feet divided into five enclosures. All of the dogs got a new dog house, new water pails, shade cover and enrichment toys to keep them occupied. The fence was installed so the dogs can’t dig out.

“We learned how to do this by an organization called Holly’s Hope based out of Huntersville,” Perkinson said. “We recently trained an organization in Gastonia to do it.”

The Gastonia organization, Animal League of Gaston County, was contacted earlier this year by AJ's Landscaping to discuss the possibility of building enclosures for chained dogs.

“We immediately embraced the idea and began the ‘Room To Run’ program,” Terry Albright Kenny said. “We reached out to Heart of the Carolinas to teach us the process. They provided time and resources and came to Gaston County for hands on instruction for three building projects.  In June, we built our first enclosure and we plan to build at least one enclosure per month.”

The work done by Heart of the Carolinas is funded entirely by donations and staffed by volunteers. The organization can be reached through their web site, https://chainfreedogs.orgor by calling (704) 280-2354. The application process to request a fence can be done online as well. Fences are generally kept within Lincoln County but the organization can provide referrals if necessary.