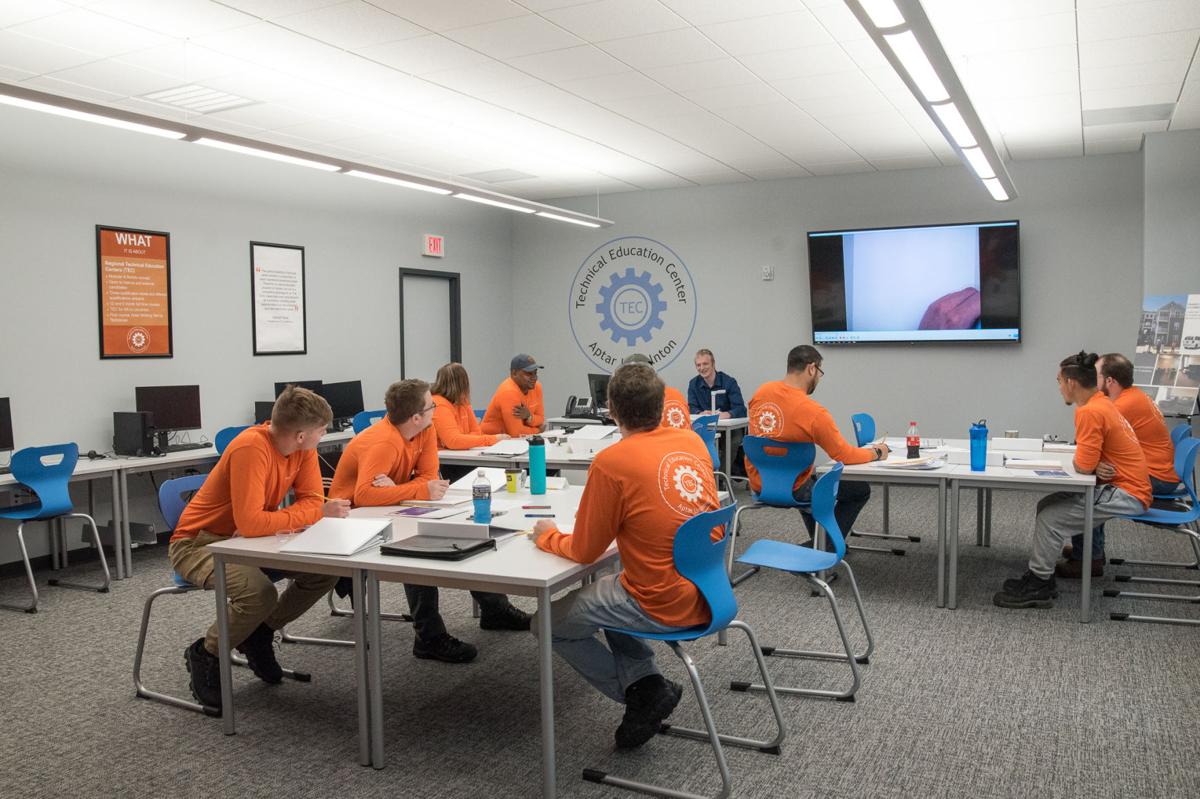 Students take part in the classroom portion of the inaugural Aptar Corporate Vocational University where they will undergo 12 months of training to become Aptar Molding Set-Up Technicians. 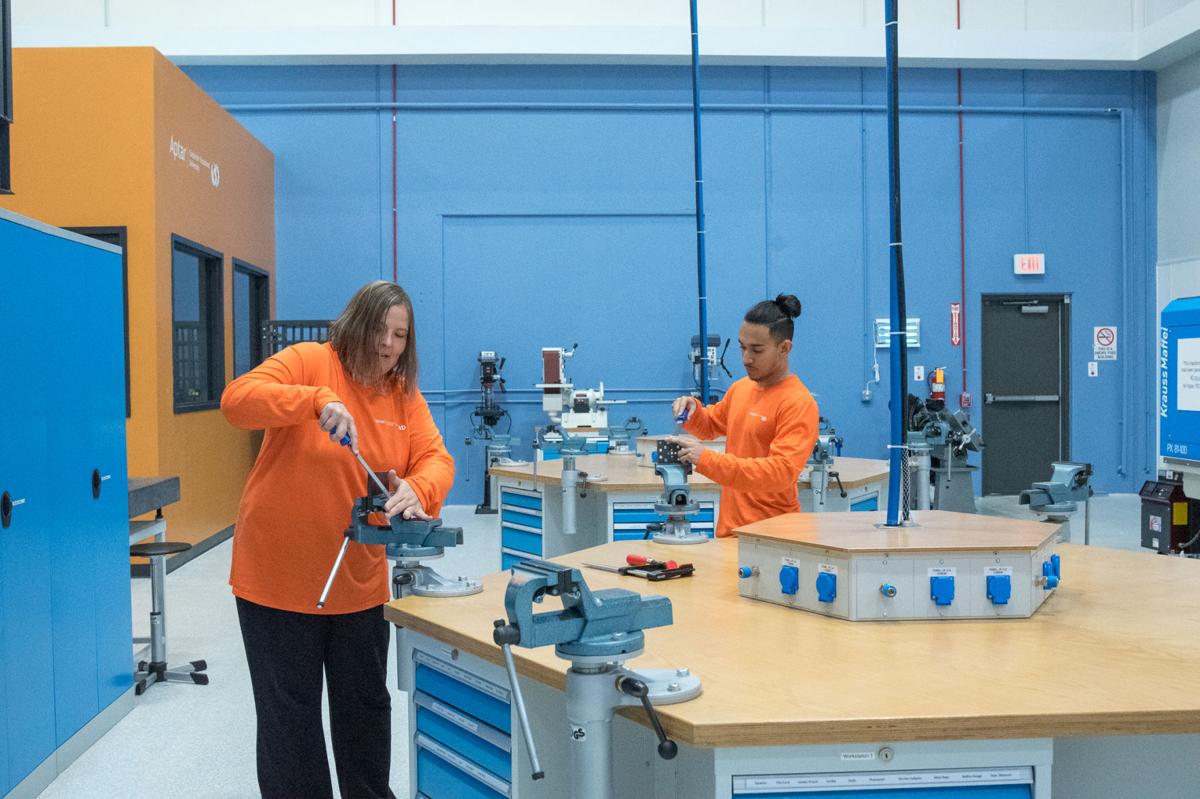 Brooke Webber (left) and Eric Rodriguez, both employees at the Aptar Lincolnton plant were able to get into the inaugural Aptar Corporate Vocational University.

Students take part in the classroom portion of the inaugural Aptar Corporate Vocational University where they will undergo 12 months of training to become Aptar Molding Set-Up Technicians.

Brooke Webber (left) and Eric Rodriguez, both employees at the Aptar Lincolnton plant were able to get into the inaugural Aptar Corporate Vocational University.

Aptar, a leading global supplier of a broad range of innovative dispensing, sealing and active packaging solutions, has launched an innovative technical education center at its Lincolnton location. This training center, the Aptar “Corporate Vocational University” is a hybrid concept which uses both internal skilled workers, educational programs and external programs to train individuals to meet Aptar requirements. It’s based on 12-month and six-month full-time apprenticeship-like programs. Given Aptar’s requirements are standard throughout their plants, this type of education center can be set up at any plant owned by Aptar.

The concept was designed by Dr. Thomas Eichberger and is based on his doctorate thesis. It is intended to help fill the current and anticipated need for skilled manufacturing workers.

The Lincolnton plant is still doing apprenticeships in the tool and die department, but many of the other plants are no longer doing them. Given this CVU training is shorter in duration than some other apprenticeship programs, Eichberger believes that it’ll work better for younger people who may have a hard time committing to longer training programs, especially if they’re just out of high school.

“They can grow their career, step by step, it’s much easier for them to understand and it’s very transparent from the beginning,” he said. “For us as a company it’s more flexible because we can adapt to new technology requirements.”

Aptar employees from 12 different United States plants, including Lincolnton, are taking part in the inaugural class, which started at the end of August. These 19 employees, who were selected by Aptar for this first class through an application and testing process, are at the Lincolnton plant in two rotating groups. One group stays in Lincolnton for eight weeks and then they go back to their home sites for training there. Those who are here from other states are given housing provided by Aptar and transportation to and from the plant.

Those in this first class, which includes four participants from the Lincolnton plant, are training to become Aptar Molding Set-Up Technicians. There are three learning locations within the program, including the workshop, the classroom and the shop floor. This is a 12-month, 2,000-hour program and there’s 22 qualification modules involved and each module has to be passed by a test.

“There are some basic modules like mechanics, electricity and mathematics because we want to make sure they have the fundamentals,” Eichberger said. “Sometimes they don’t have that education when they come in. We also look at social responsibility and engagement so they will be doing a project together as a group and learn project management.”

The TEC program is currently set up with a capacity of 24 trainees who are provided with modern training equipment, tools and machinery. Each trainee has their own workspace with tools and equipment.

This first class was limited to current Aptar employees but Eichberger said that the plan is to open it up to outside candidates including high school students. Of course, given the current TEC is in Lincolnton, a lot of employees at that plant wanted to get in, but it was limited to four from Lincolnton so employees from other plants could take part in it.

“We had a number of applicants,” Brian Kufalk, director of operational excellence at Aptar said. “They will be re-signing up for an opportunity at the completion of this one. Being that this is the first time, we really didn’t know what to expect. We were hoping that there was a lot of interest.”

Brooke Webber, who lives in Maiden, started as a machine operator at Aptar about 10 months ago. She was very excited to learn about the program and was even more excited when she was chosen for this inaugural class.

“It was an application process and tests,” she said. “I knew it was a great opportunity so I just crossed my fingers and hoped I knew enough.”

Also in the current class is Eric Rodriguez from Lincolnton, who started at Aptar a year ago. This is his first job out of high school.

“I really wanted to do processing after working here and watching them on the floor,” he said. “My parents thought I was going to hate it here, but after the first day, it was easy. I just had to get used to standing for 12 hours.”

The next Technical Education Center will be built in China. Other courses will be added in the future as well. Next year, there will be a process technician course.

“You can’t hire off the street with the skills that we need for injection molding and assembly mechanics,” Kufalk said. “That was really why we started this program – to teach internally. Aptar is a very good company with all of our other benefits, work environment and culture. So we really think we can bring them in, train them properly and thoroughly and they’ll be very happy and our retention will be good.”