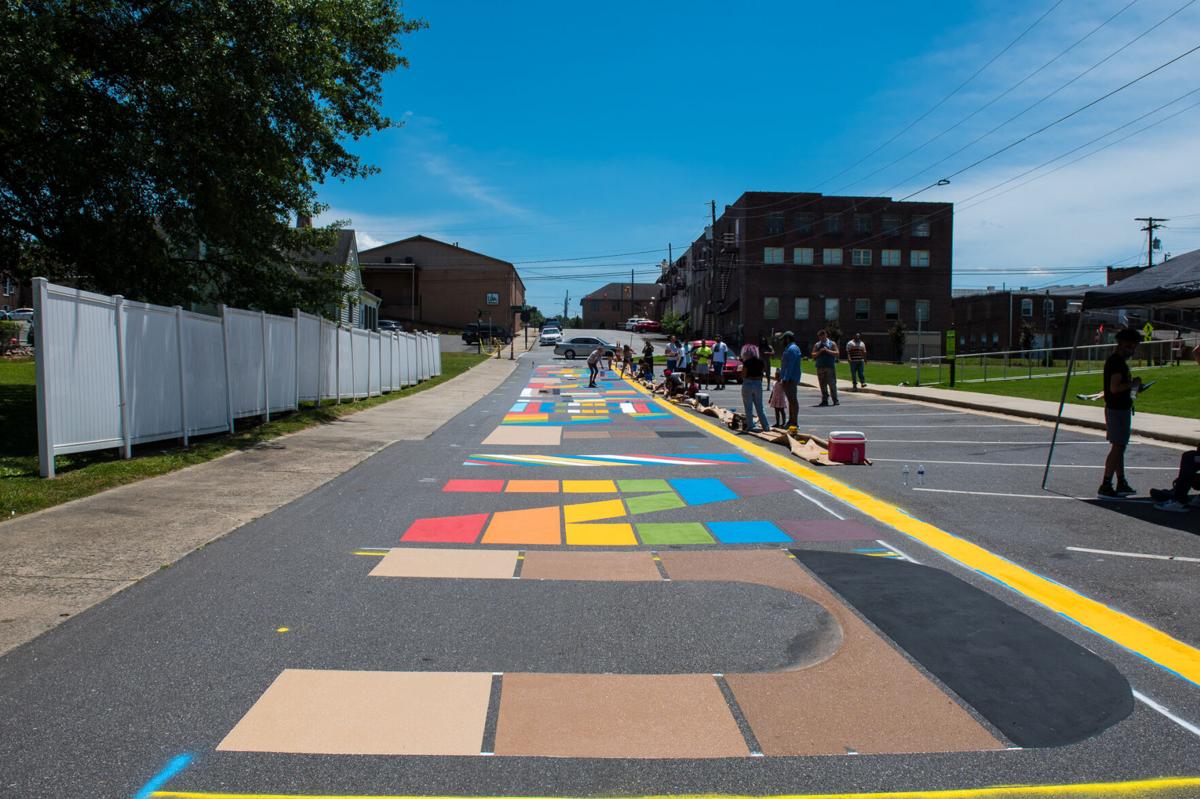 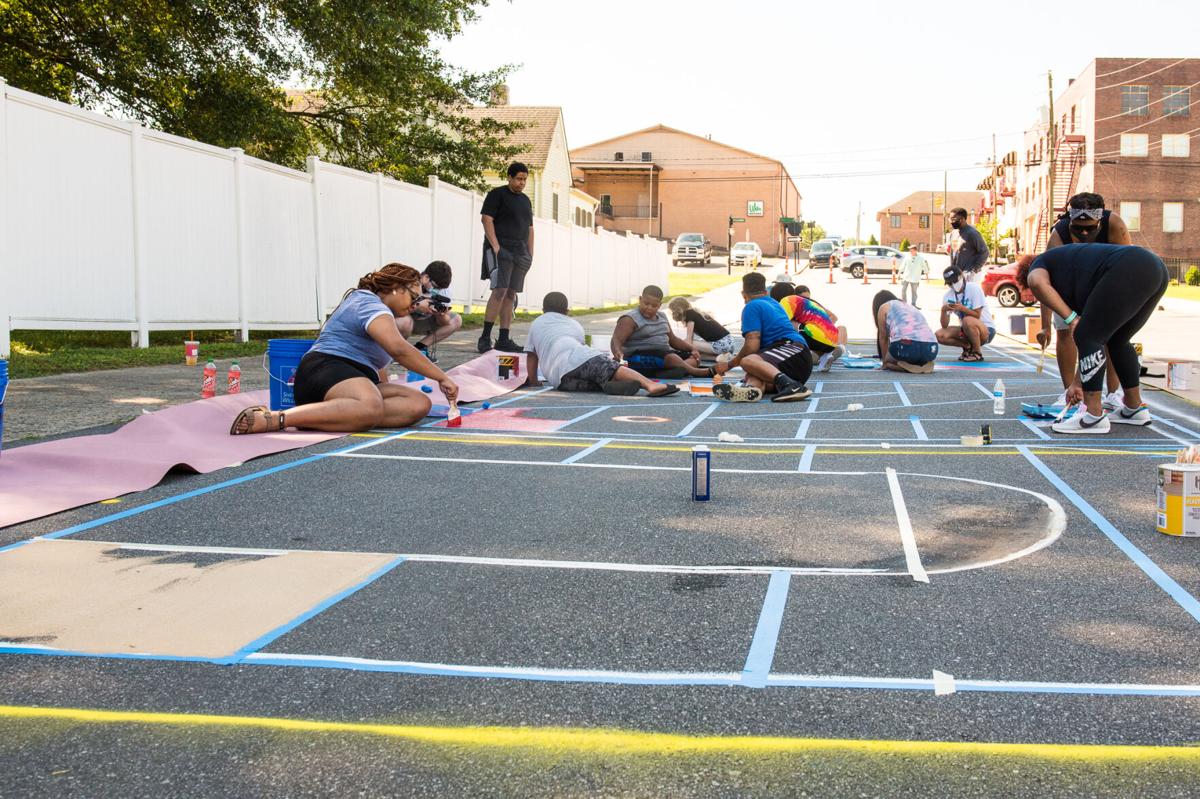 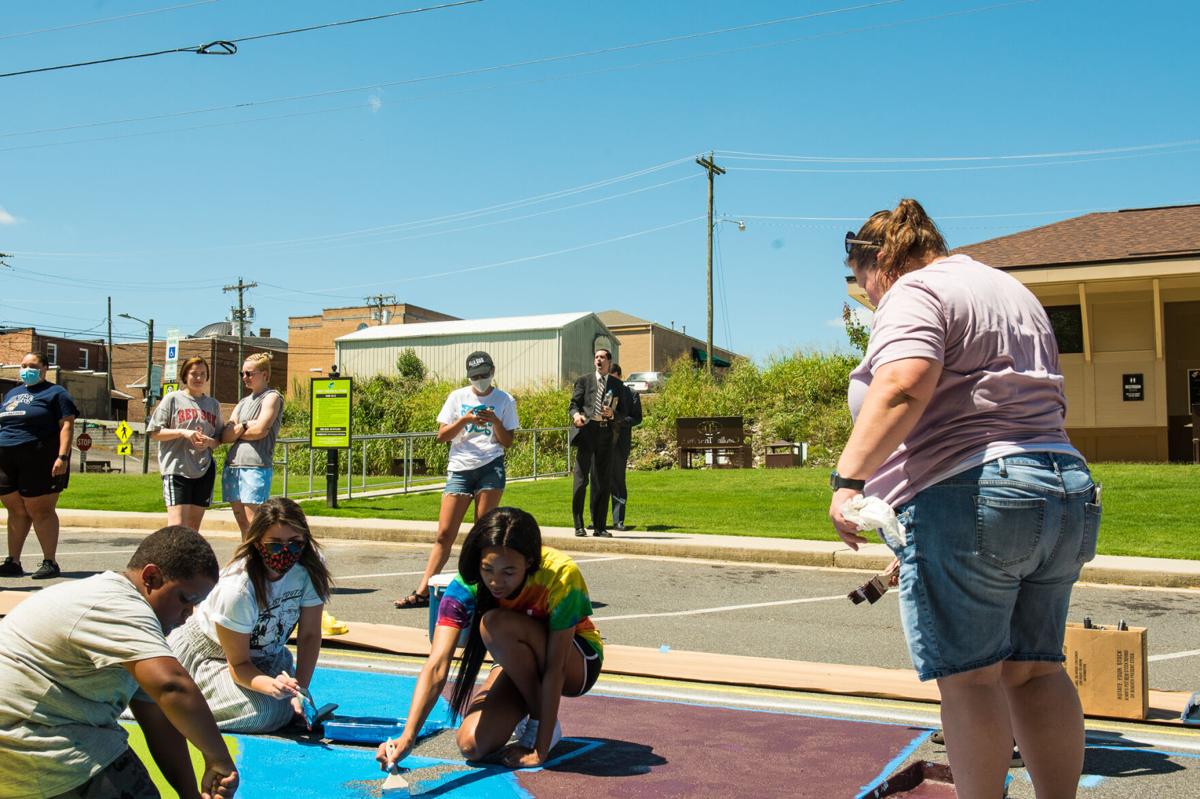 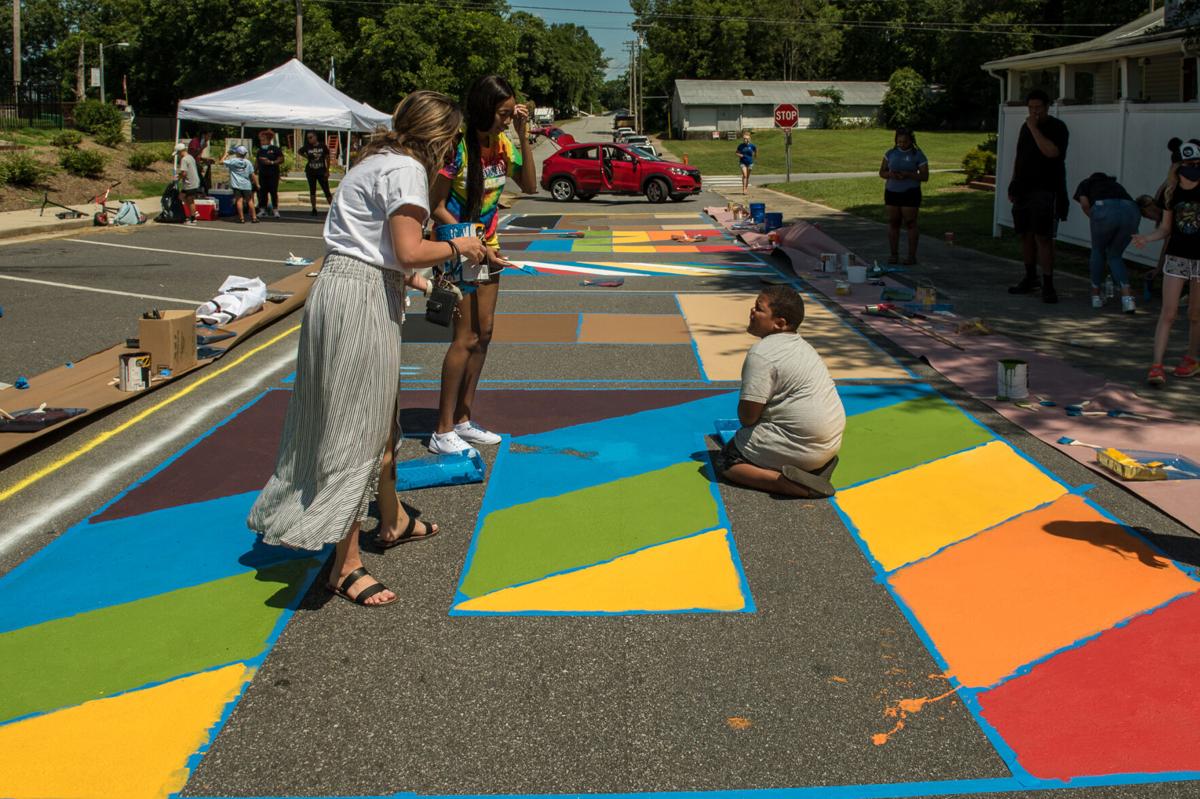 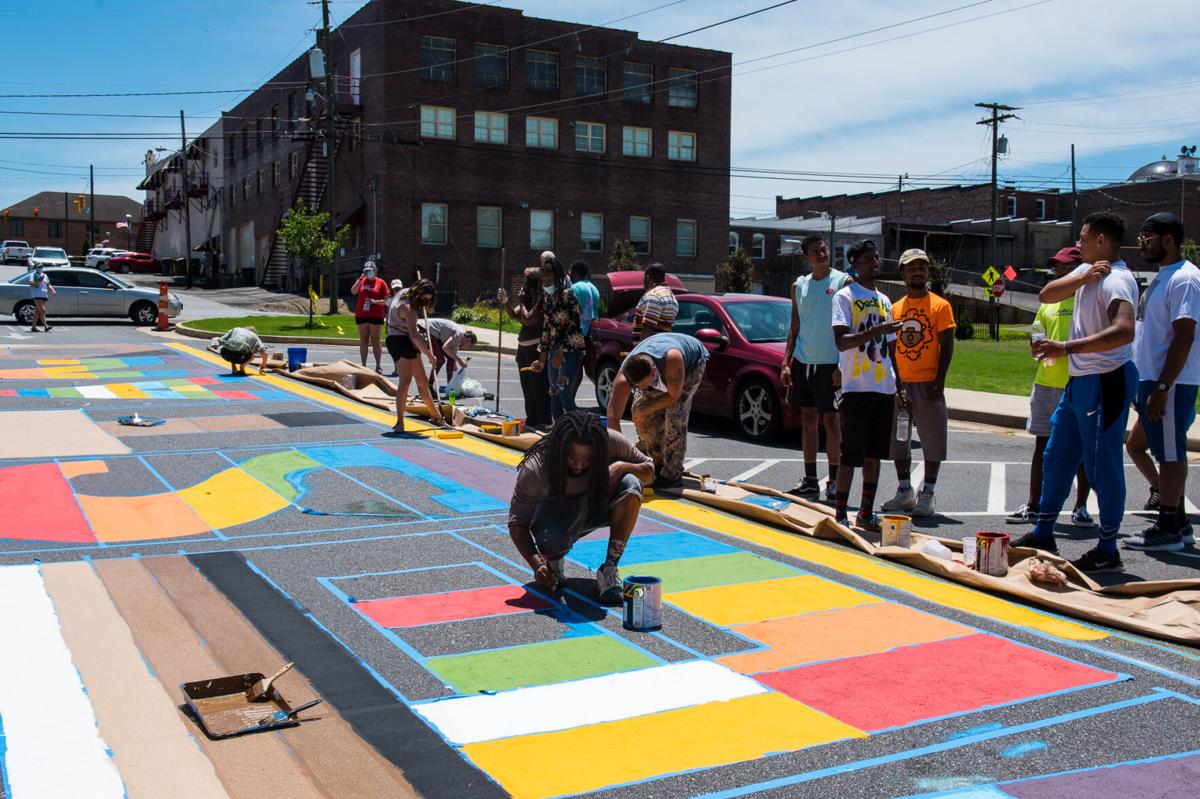 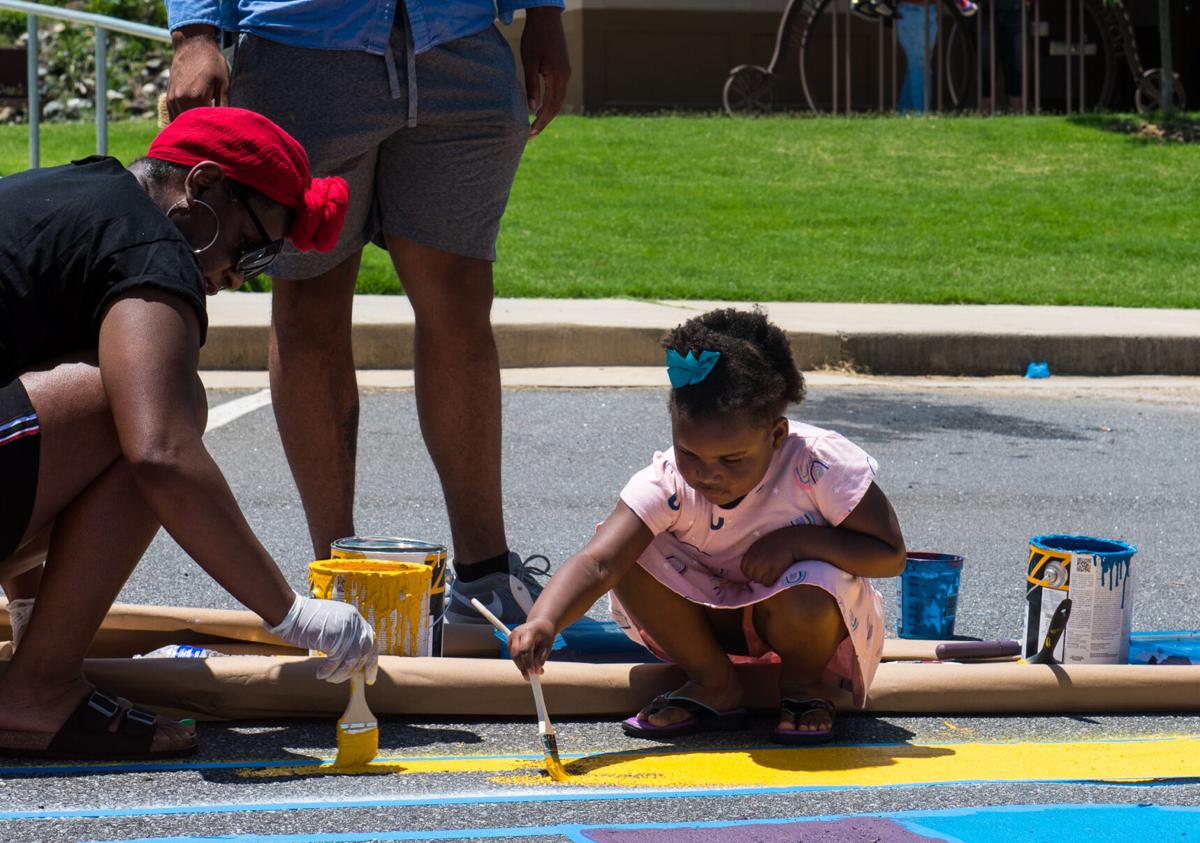 Standing united is complicated these days, but the alternative to “united we stand” is “divided we fall.” A new street mural with the words, “United we Stand” was painted on North Poplar Street at First Federal Park in Lincolnton over the weekend. Young people with skin tones as varied as the paint colors in the mural worked together to bring this project to fruition.

The project was the brainchild of a young African-American man, Demarius Pearson. He’s weathered the onslaught of complaints about the colors and idea behind the mural with great grace. He wanted to use art to not only unite the African American community, of which he’s a part of, but other minorities that live in Lincolnton.

“I was a fan of murals,” he said in an earlier interview with Times-News. “But I wanted to add to the Black Lives Matters movement. I felt like this was the best time to do it. I feel like these groups are feeling the same pain that we do. The main point for the mural is for the people represented in it to see that the people not represented on the mural have their back. For others to see that even though the mural isn’t for them, they can still come out and be show support. That’s the only point I’m trying to make. That’s unity.”

It was hard for some to understand Pearson’s desire for three races or groups of people who have suffered through various types of ostracization and persecution, black, Latino and LGBTQ, to be supported by everyone. This mural wasn’t for everyone, he said, but he wanted everyone to come out and support it. He got his wish over the weekend.

Except for the street preachers who showed up to express their opinions, the painting was conducted in peace and harmony. In general, the young people simply ignored the preachers.

“This group doesn’t want to cause any kind of confrontation or negativity because that takes away from their core message,” said City of Lincolnton Community Relations Director Laura Morris who was with the group the entire weekend. “They’re not going to engage in dueling protests or yelling matches with one another. They’re here to make their statement. Demarius Pearson has done well under a great deal of stress over the past two weeks.”

“The project is stating that we’re all united through our skin tones,” Douglas said. “It doesn’t matter if you’re black or white. Everybody needs to stand together united because divided we fall. It’s expressing this in a very colorful way next to a park for kids. It’s big and vibrant and you can see it from the sky which is awesome.”

Douglas has worked on other murals in the past in Charlotte.

“I’m with another organization in Gastonia called ‘Love’ and I wanted to do something in Lincolnton, but I felt like it should be started by someone in Lincolnton,” Tyson Barnette said. “When Demarius called me, I told him I was definitely down. Now I’m helping in any way I can. We’re all people and if we’re all united, we’re one.”

The idea was presented before the Lincolnton City Council on June 25 and passed unanimously. When the project was announced on Facebook, there was discord among some members of the community about the lack of the American flag in the artwork, but Pearson insists, it was about flags. Pearson said he was brought up knowing that putting a flag on the ground was disrespectful. At one time, Latino flags were in the original design, but they were was just as a placeholder. Now it’s just the colors.

As an artist, Pearson focuses on showcasing social points such as depression, abuse and now uniting the community.

“It came out so much better than I thought it would,” he said. “There were so many different people who came out to help. It was so cool. Everyone seemed to have fun too.”