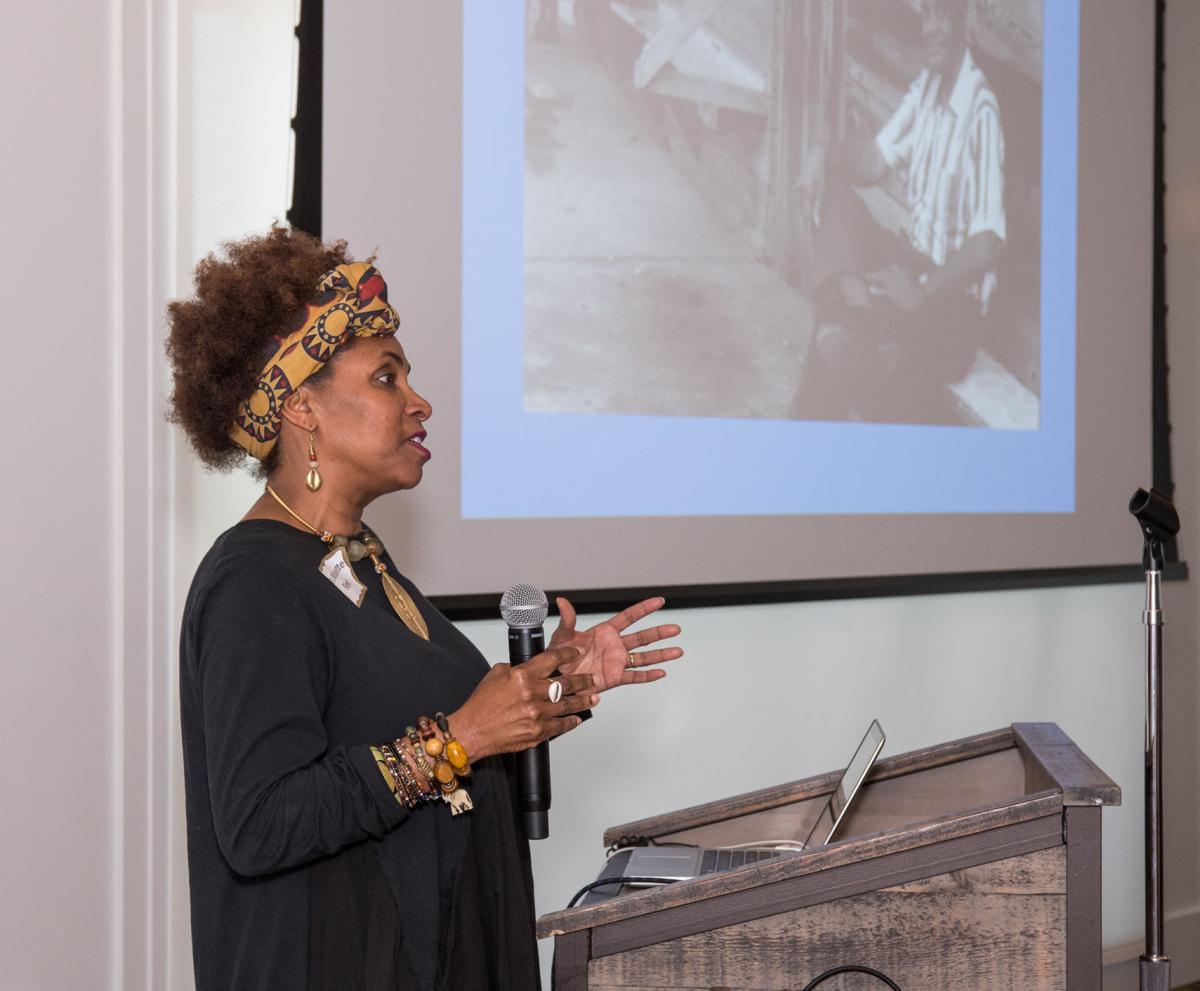 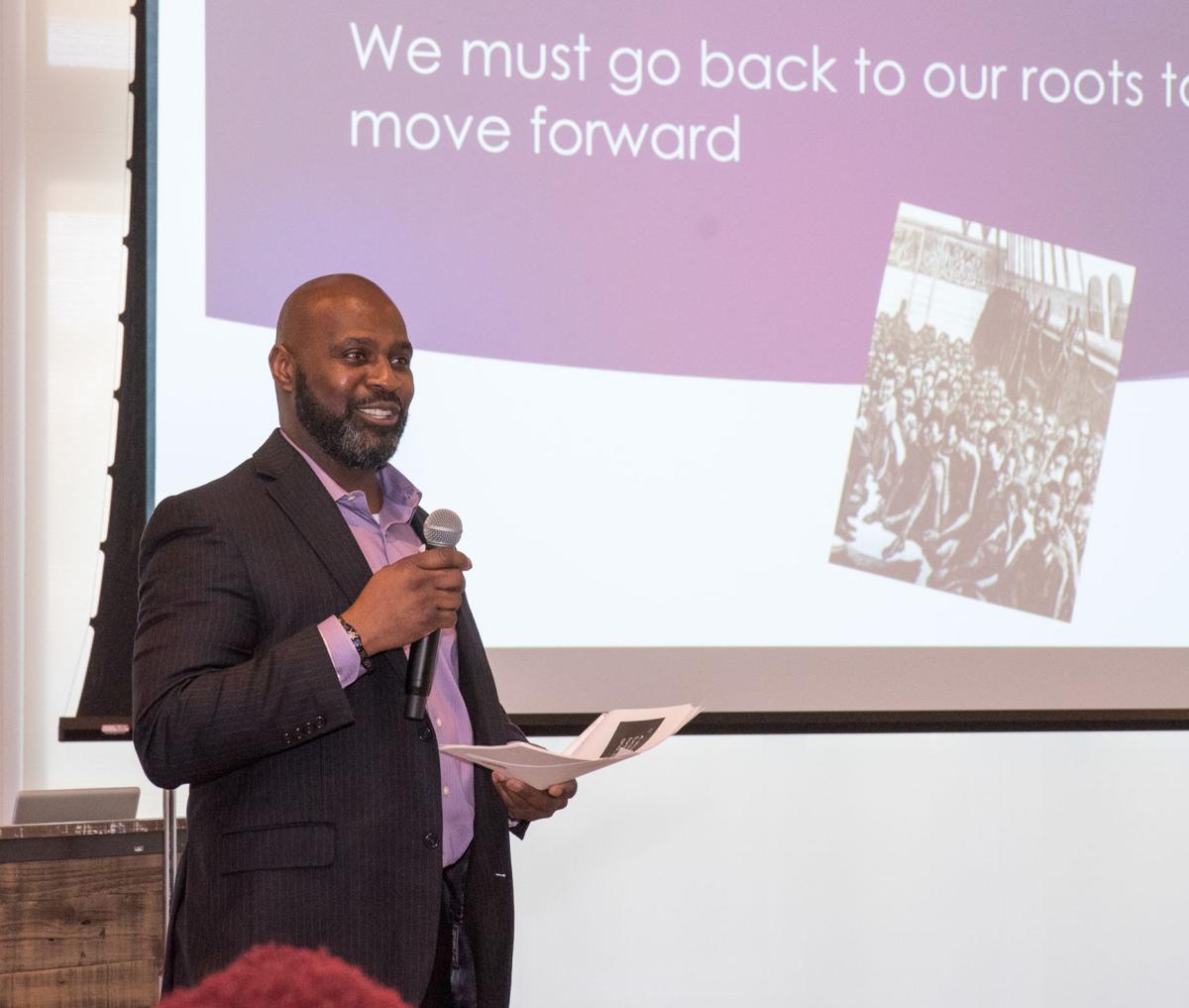 Lewis McLean, the chairman of the Board of Trustees of Tucker’s Grove presents at the second annual Black History Program at Trilogy Lake Norman on Saturday.

Lewis McLean, the chairman of the Board of Trustees of Tucker’s Grove presents at the second annual Black History Program at Trilogy Lake Norman on Saturday.

The Nubian Experience Club at Trilogy Lake Norman held their second annual Black History Program on Saturday. When Trilogy came together, there were a substantial number of African Americans living there, including the co-organizer, Gail Burke. Last year, the president of the Nubian Experience Club at Trilogy, Cheryl Spencer, had the idea to put on a black history program. Burke, also a member of the club, was tasked with putting together the program. Last year, the program was based on the fact that Trilogy was built on what was a former cotton plantation, the Nixon Plantation. The program was very well received so they decided to do it again. This year, Burke decided to focus on Tucker’s Grove Campground which is less than five miles from Trilogy.

“Tucker’s Grove is our nearest historic neighbor,” she said. “We thought that following up on the Nixon Plantation, the actual grounds that this community is on, we shift a little bit, widen our radius and focus on Tucker’s Grove.”

Burke, who is relatively new to Lincoln County, found out about Tucker’s Grove quite by accident. When she took her dog to East Lincoln Animal Hospital, the receptionist there suggested that Burke connect with Lewis McLean, the chairman of the Board of Trustees of Tucker’s Grove. McLean gave Burke a tour of Lincoln County starting out at Tucker’s Grove Campground.

“I think America’s strength is the fact that we have people from so many different ethnicities and cultural background,” Burke said. “Much of the focus, historically, has been on those populations that have come through Ellis Island. There are others who came through the black Ellis Island in South Carolina and we wanted to be able to share our culture with everyone here at Trilogy. I call Trilogy a colorless community because the experience that I’ve had here as an African American has been so very positive. I’ve been seen as an individual. I think because so many of us are over 55 years of age, we’ve all been through some type of life situation and we have a sort of comradery of just survivors.”

McLean was one of the speakers on Saturday as well as Dr. Minuette Floyd, a professor at the University of South Carolina and author of “A Place to Worship: African American Camp Meetings in the Carolinas.” Floyd, who attended camp meetings throughout North and South Carolina with her family as a child, rekindled her relationship with camp meetings as an adult. After she finished college and moved from Florida to South Carolina in 1996, her brother asked if she wanted to ride with him to camp meeting. As soon as she stepped on the grounds, Floyd writes in “A Place to Worship,” her childhood memories came back to her.

“One of the things that I found out was that there was not a lot written about black camp meetings,” she said. “I started to ask, why not, why isn’t there anything written about this rich history which is why I took it upon myself to start slowly collecting information. I’m doing it for the future generations too. Children need to know about the history, about their ancestors and all those that walked on those grounds. When I’m on the grounds, I feel like I can see the footprints of the people who stepped there before me.”

In her presentation through pictures and videos, Floyd immersed the audience in the experience of a black camp meeting – what it is like under the arbor, the food and the music. She brought them around and inside the tents and told stories about those that attend camp meetings.

“I’ve asked many people about the experiences, what are your first memories of camp meeting,” she said. “One child told me that he liked camp meeting because he got to eat cake from scratch. The food tradition is a story in and of itself.”

McLean summarized the history of Tucker’s Grove Campground including the restoration of the arbor. He also shared what camp meeting was like at Tucker’s Grove including his early memories of attending.

Tucker’s Grove may not look so good from the outside, but I guaranty if you go inside any one of these tents, you’ll say, ‘wow, I didn’t expect this tent would like this,’” he said. “So please come join us.”

McLean closed his presentation with a picture of his grandfather at Tucker’s Grove saying it was his best memory of camp meeting.