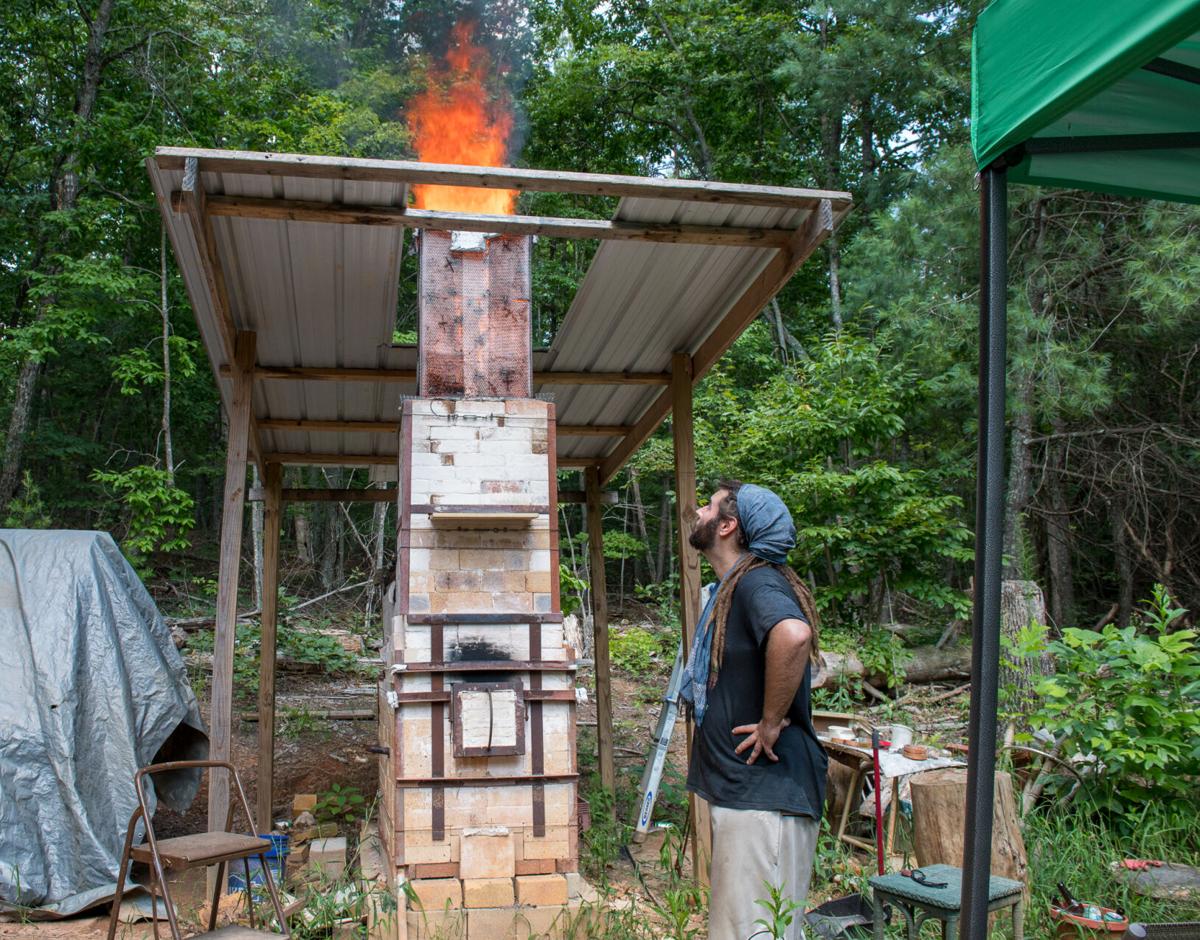 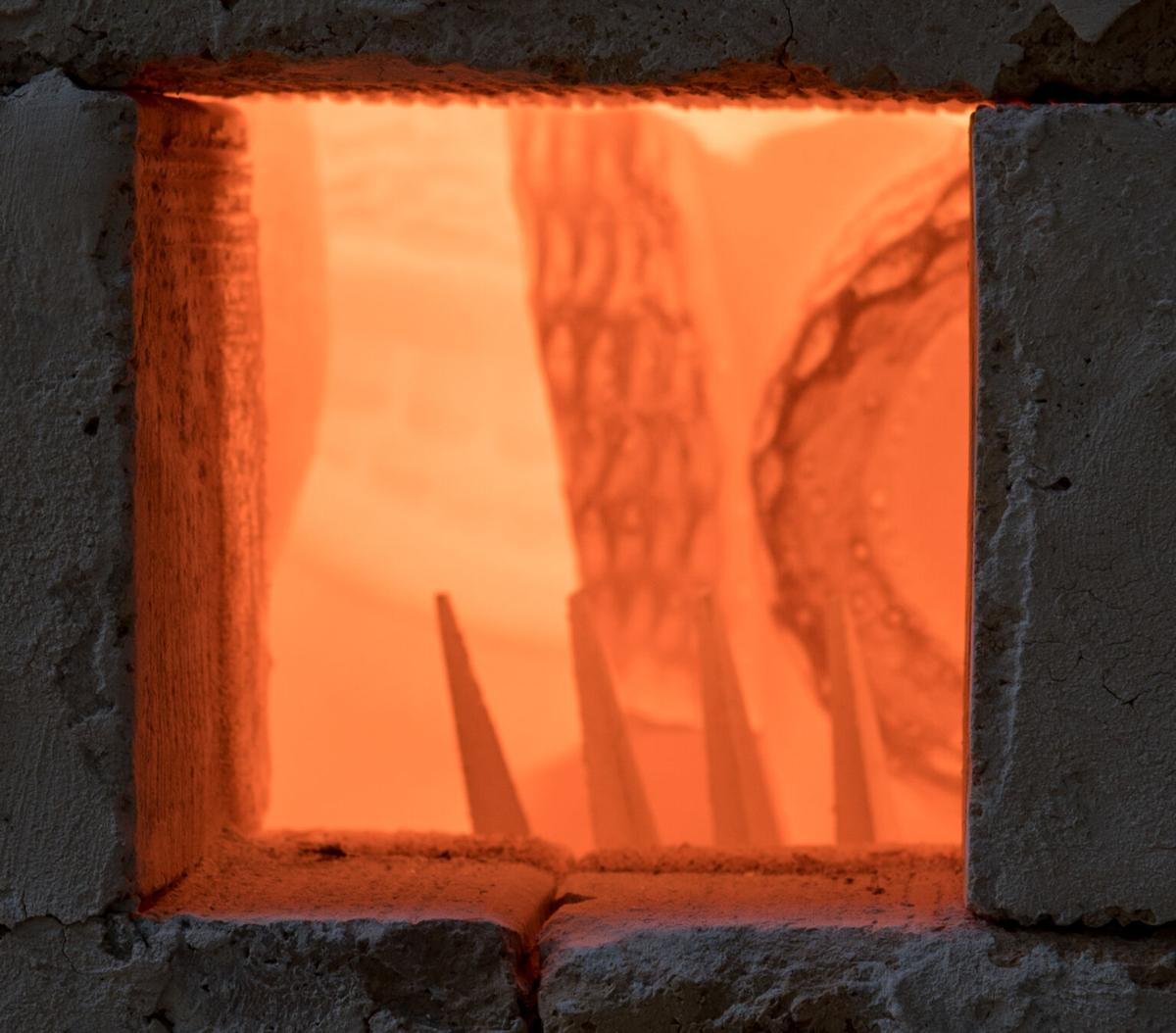 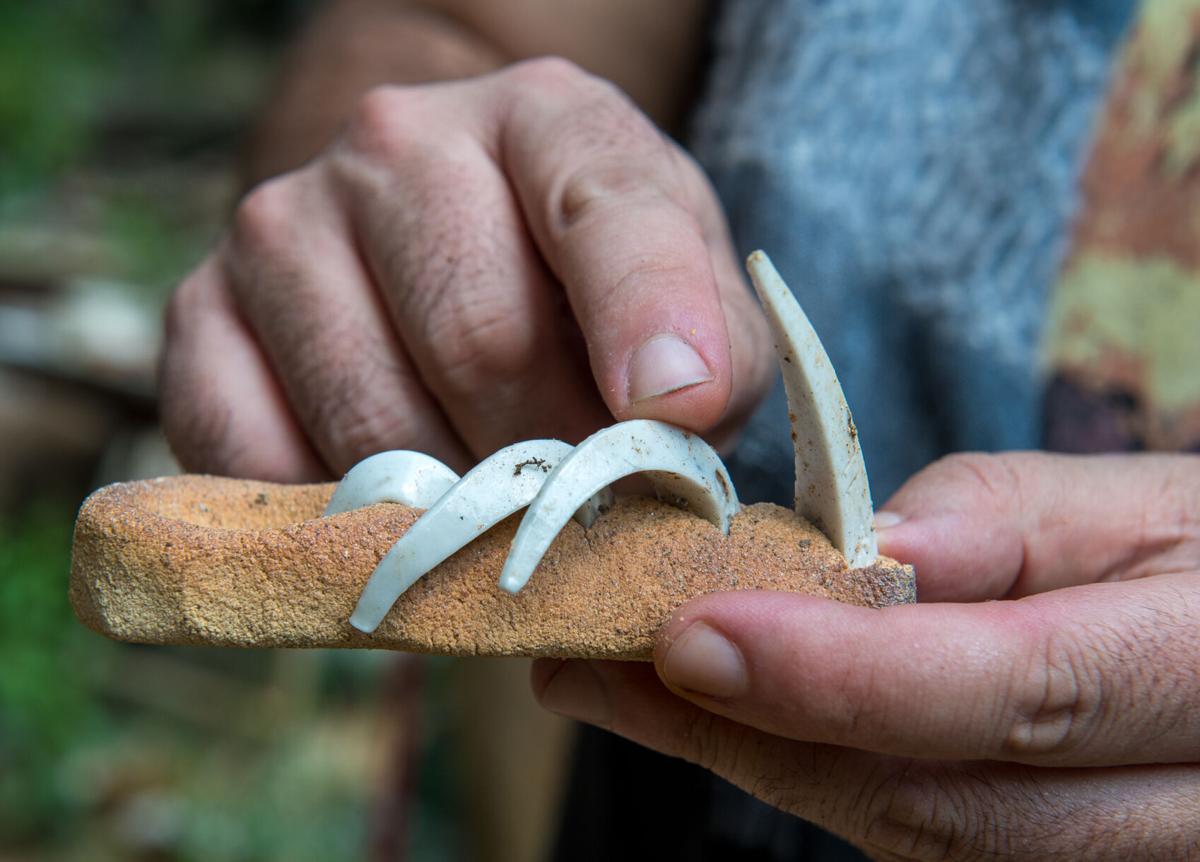 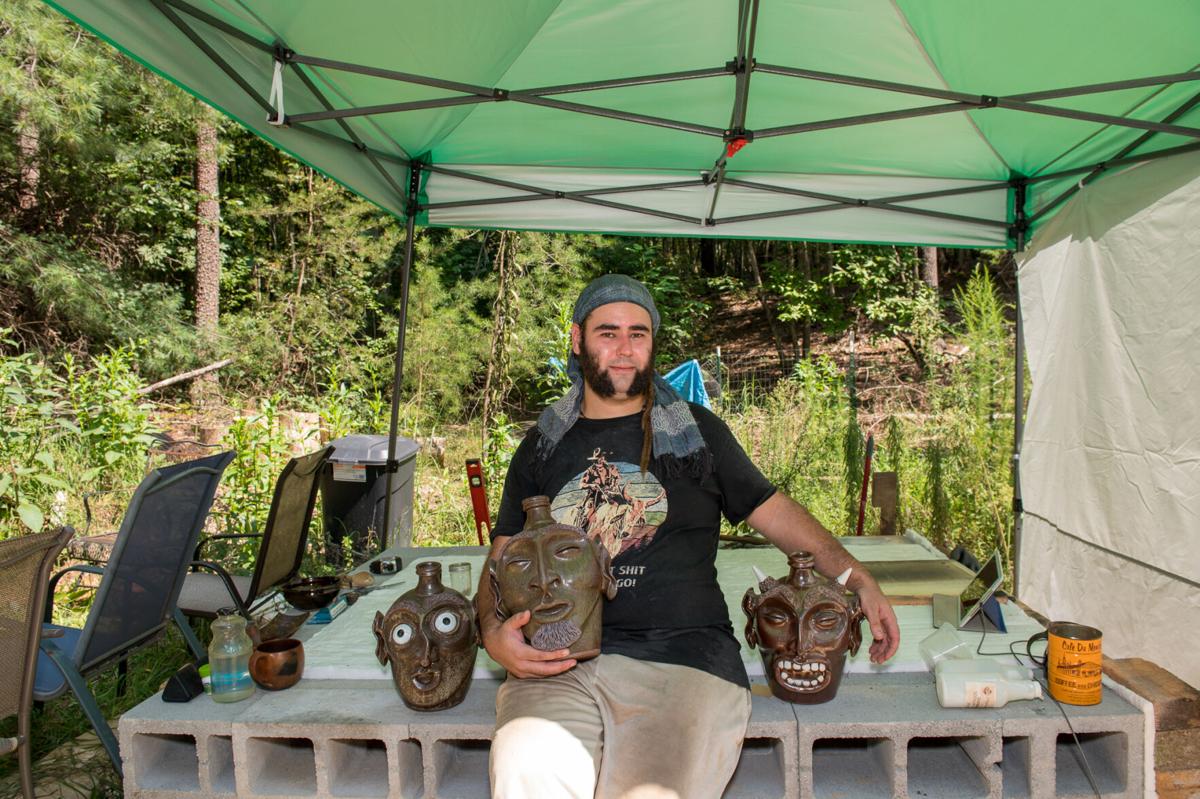 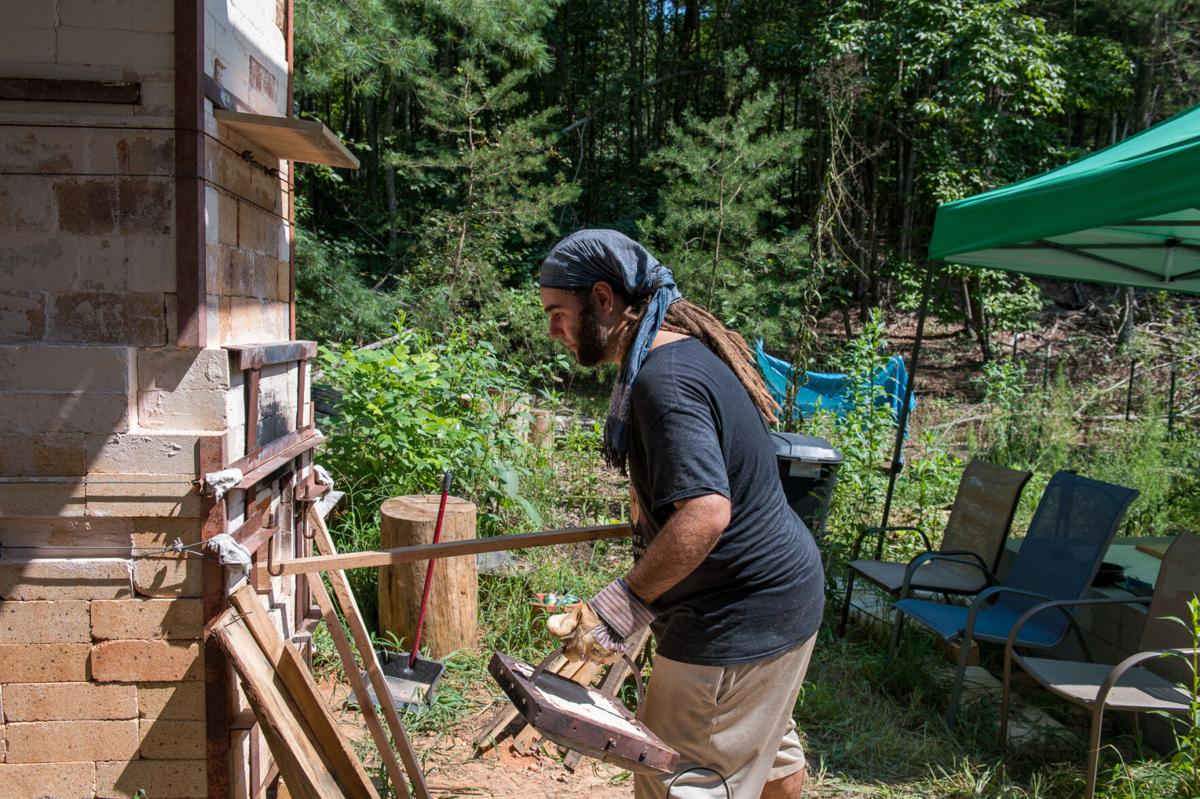 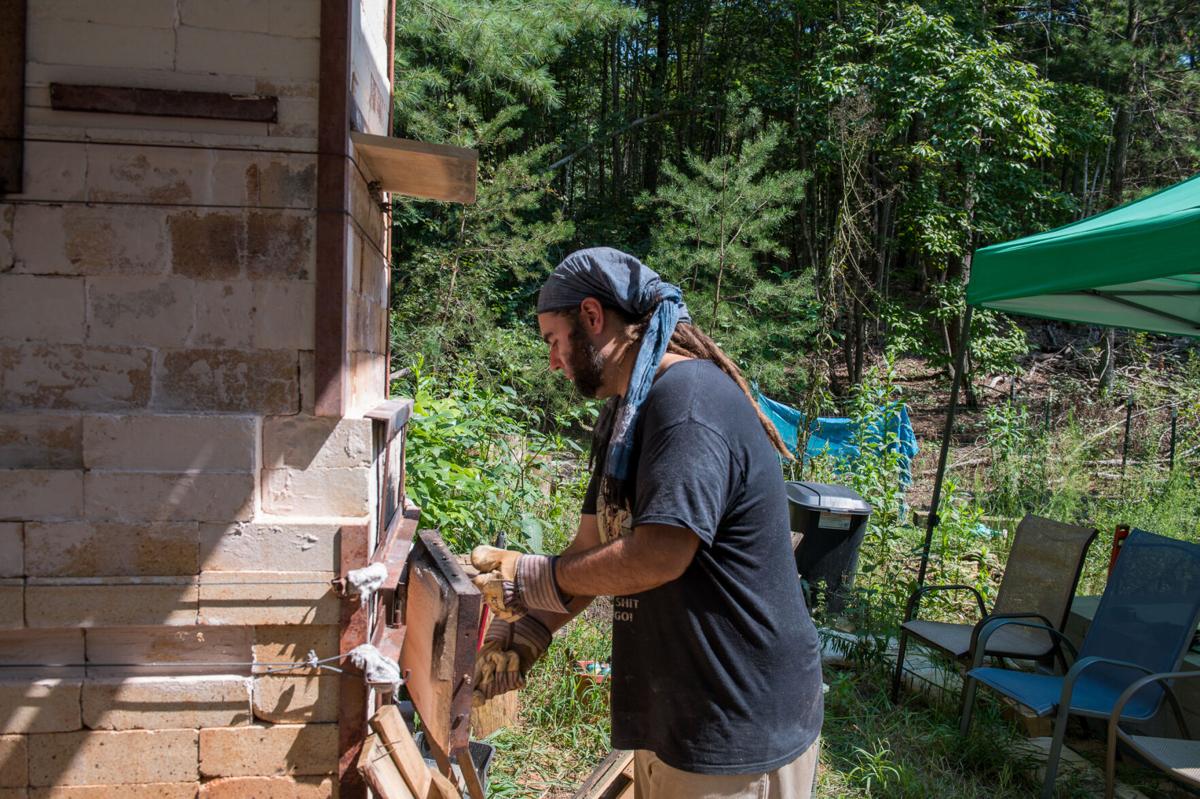 Even though the air temperature was a steamy 90+ degrees, it didn’t compare to the temperature inside the kiln that Ben North was firing. As is the case with most potters, North had enough pots made to fill the kiln, so it was time to fire it. He didn’t have the option of waiting for a cooler day when it might have been a more pleasant experience. Instead it was, as North called it, “man killing work.”

Two of the pots that were in the kiln that day are to be part of a collection that will eventually be mounted on one of the stands along East Main Street in Lincolnton. It’s a project that’s been a long time coming, but once it’s all in place, it’ll show the diversity of area potters.

By later in the afternoon, the kiln had been burning since the early morning hours, North, who was coated with a fine film of ash himself, intently watched the color of the flames appearing through the chimney of the kiln. The fire had to be fed constantly to maintain the temperature.

“I watch the color of the flame and the smoke and how much pressure is coming behind it,” he said. “That tells you how much feed it needs where. You can’t just pump it – you have to keep feeding it, but you don’t want to pump it so hard that there’s real black smoke. That means you’ve burned all the oxygen out of there. The smoke is just unburned fuel. There’s a lot of paying attention. I don’t blame people who fire everything with an electric kiln.”

Not a ground hog kiln that many a Catawba Valley Folk potter used or in some instances still use, North’s is a wood-fired kiln that he constructed himself based on a design by a late British potter named Steve Mills.

“As much as I love a ground hog kiln it’s a big old effort and I can’t expect people to come around and help me with it,” he said. “Everybody’s real busy. I’ll never say no to firing somebody else’s ground hog but it’s a little too much for me. It’s a beautiful tradition though. If they all go away, if nobody’s firing them anymore, I’ll build one because it is worth keeping but it’s a labor of love.”

In addition to watching the flames and smoke, North also uses cones to measure the temperature within the kiln. It’s called a “Pyrometric cone” and it’s a tool for obtaining reproducible results during firings. North buys his cones made commercially from specially formulated ceramic compositions. They bend reliably at specific temperature ranges.

They don’t show temperature per se, but more the relation between temperature and time and how much heat is absorbed. There are several cones on each base, and they bend one at a time depending upon the temperature within the kiln. For example, cone 6 indicates a temperature range of approximately 1800 - 1850F. North uses cones 6, 9, 10 and 11 in his kiln.

North’s roommate, Zach Shumway who normally can be seen managing a different kind of fire at Good Wood Pizza in Lincolnton, helped him feed the flames. North said that firing a kiln is like running a play using stage help – when the actors get up on stage – in this instance close to the heat of the kiln – the adrenaline pushes. When they get off, they take a break and someone else takes over. In North’s instance, he was working with just one other person so it was extremely labor intensive for the two of them, especially given the heat of the day.

“You finish up and look inside at the pots and you ooh and aww and you take pictures,” he said. “Somebody always wants a group photo. Then you tip over.”

Because North was using oak wood, he had to wait 48 hours before he could open the kiln to look at the pots inside.

North’s pottery education comes from an eclectic blend of potters from around the United States. As a child, he was always fascinated by clay. He’d go to museums to see the native Iroquois pottery and wonder how they made it.

“I’d go out to a riverbank, find some clay and shape it into crude things,” he said. “Then I’d build a campfire and toss it in, and it exploded. Eventually you learn a few things though and get a couple of pots that work out.”

While growing up in western New York, North was accepted into the Rochester Folk Art Guild where he learned to throw pots from well-known potter Annie Schliffer.

When he was 18, North moved to New Mexico and apprenticed under an Apache potter. He returned to upstate New York for a while, then to Colorado, back to New Mexico, then to California. His companion throughout most of these travels has been Shumway, whom he’s known since high school.

Inspired by the reptiles that frequent his studio and around his home, many of North’s jugs have snakes or lizards on them. Because he’s a full-time potter and broke most of the time, North’s learned to do things on the cheap and labor intensive. He uses very little, if any commercial clay favoring the “wild” clay he digs from various locations in North Carolina.

Throughout his moves across the country, North has dragged an ancient, 300-pound manual kick wheel, which he acquired from an elementary school art teacher in California who thought it was too dangerous to be used around children. He doesn’t use it much because he doesn’t want to get “potter’s hobble” – a condition that occurs if a potter exclusively uses a kick wheel to throw pots, the one leg he uses to kick the base wheel to keep the apparatus going, gets larger than the other leg making the potter walk with a limp.

North is a bit of a hermit and doesn’t leave his home much. He doesn’t drive at all now due to severe migraines and back spasms. If all goes well, his work will be on permanent display in Lincolnton.