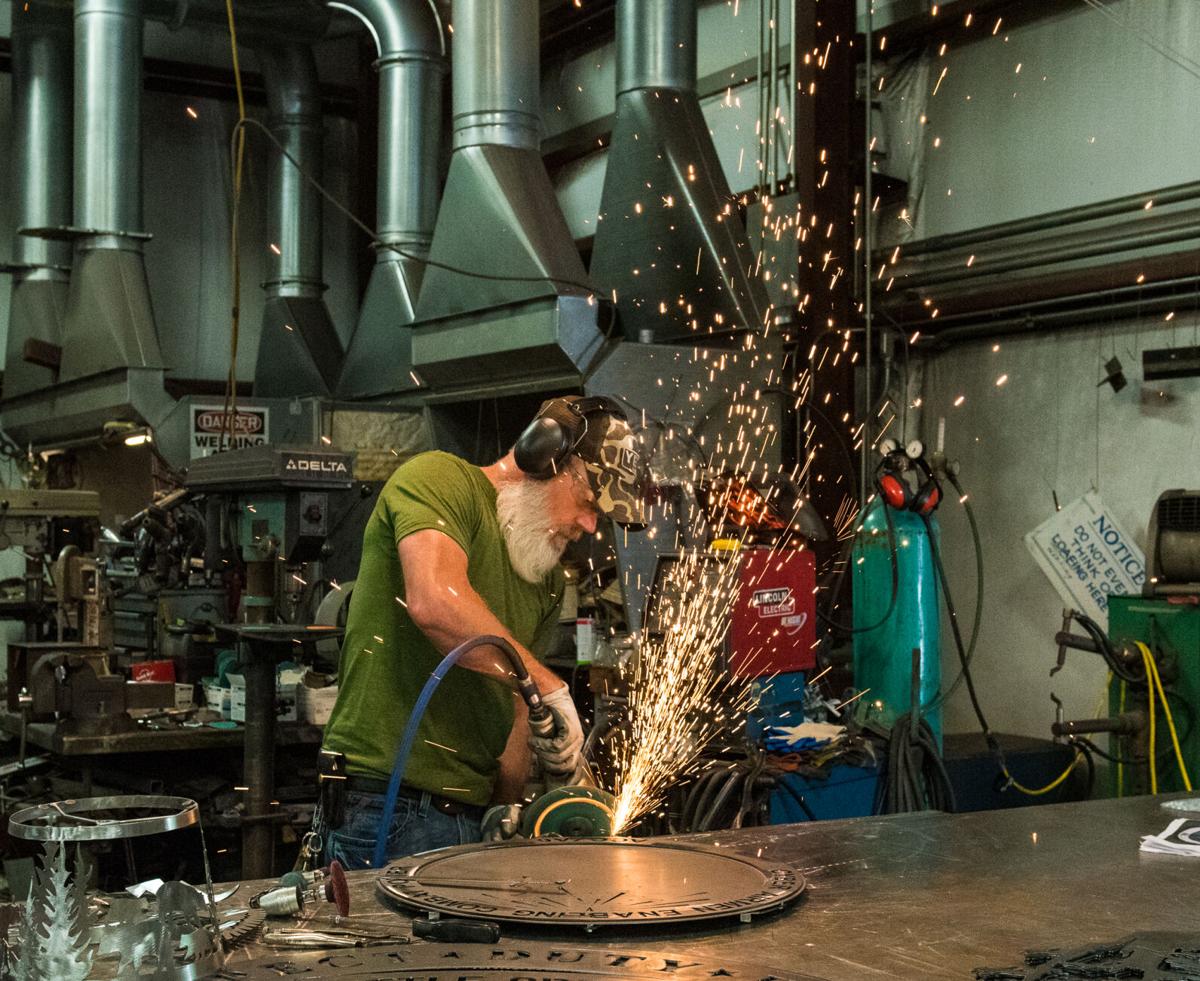 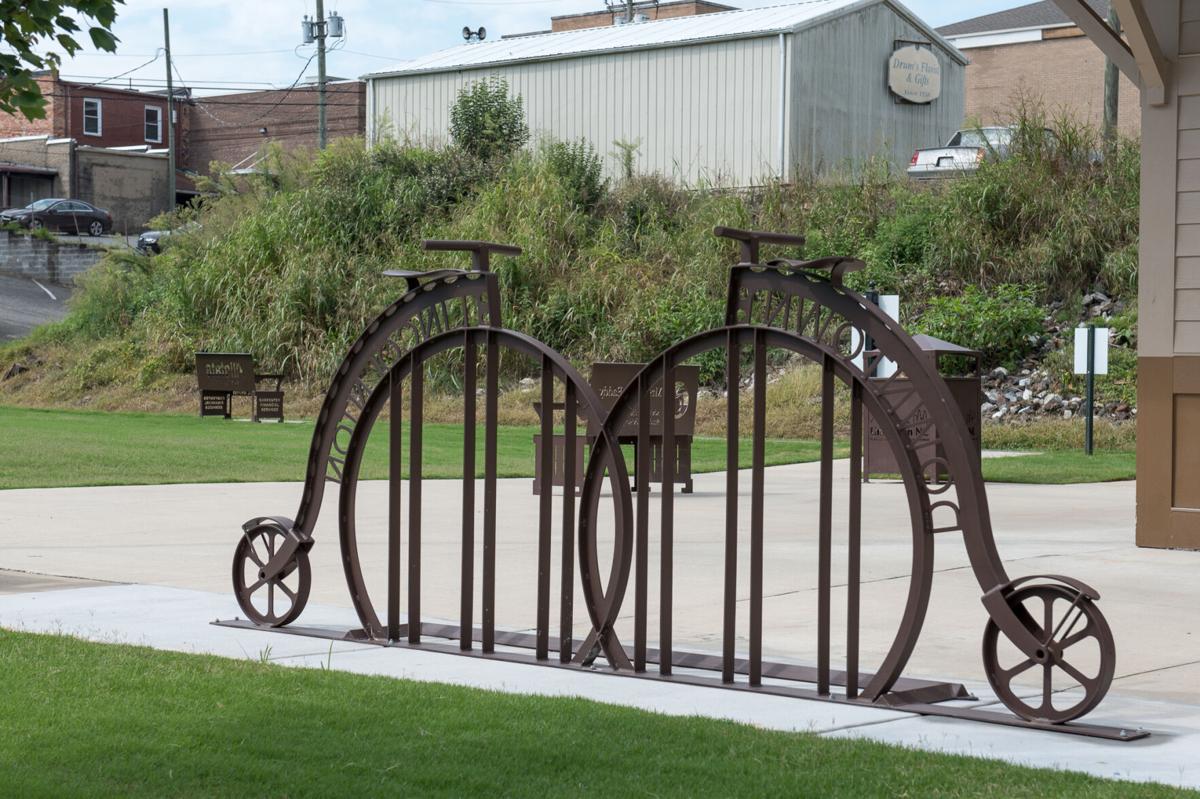 Sparks fly on a regular basis at Hartcrafters Metal Art in Lincolnton. When they clear, exquisite metal creations reveal themselves. Several of these creations, hand crafted by Hartcrafters owner Jason Hartness, are now installed in downtown Lincolnton. The bench in front of City Lunch is one which was put in place by the Downtown Development Association of Lincolnton last year. More recent additions are the bike rack and an addition to the retaining wall fence at First Federal Park. The pieces at First Federal Park were put in place by the Lincolnton Tourism Development Authority.

Hartness has channeled the creative genes of both his father and his mother. His mother is the conventional artist doing work with pencil and watercolor. His father was an engineer.

“I got the best of both worlds as far as fabricating artistic metal,” he said. “I don’t consider myself an artist. I’m more of a guy who can envision what I want to build before I do it. I see how to fabricate.”

Hartness, who is educated in mechanical engineering, and his father, Roy started a textile business initially in Kings Mountain in 1996 and operated it until around 2004. They built the building in Lincolnton in 2003.

“When that industry pretty much left the country, we didn’t have a whole lot of work, so I started doing the artistic creations since we had all the equipment,” he said.

The U.S. Air Force is one of Hartness’ biggest clients making insignias for bases, but he also does a good bit of custom work, like the installations in Lincolnton.

“That’s where we started out – doing rustic designs, anything that would go in a log or rustic home – fire screens, switch covers, gates, fences,” he said. “Then we got into business logos and I think they caught the attention of some of the bigger people in the U.S. Navy which was where we first started.”

The bike rack is made in the shape of a pair of old-fashioned tricycles. He’s made two of these bike racks. The LTDA hasn’t decided yet where to put the second one. The railing over the retaining wall features three aspects of the Lincolnton area – industry, history, arts and culture and agriculture. Hartness did the design on industry, Matt Donnelly, history (the Battle of Ramsour’s Mill) and arts and culture (pottery), and Scott Beam did the agriculture portion which was in place first. Hartness fabricated and assembled all but the agriculture portion of the installation.

There are also trees that will hold smaller pieces of pottery along East Main Street that Hartness made. They’re still waiting for the pots to be finished and installed. There’s another bench commissioned by the DDA to be installed in a downtown location at a later date.

The mission of the LTDA is to promote travel, tourism and conventions within the City of Lincolnton and to sponsor tourist related events and activities in the city and finance tourist-related capitalist projects. To date, the projects that the Lincolnton Tourism Development Authority has completed include contribution towards the establishment of First Federal Park, purchase of the Lincoln Cultural Center’s front digital sign, purchase of the Highway 321 gateway signs, contribution towards the Keever Drug mural, coordinated design of the LTDA logo and Lincoln Quilt Trail logo and start up, contribution towards the Betty Ross Park River Launch and Fishing Pier, the Battle of Ramsour’s Mill monument and signage, a contribution towards the city Christmas tree and purchase of the city holiday banners, launch of the Linc mobile app, establishing the Appalachian Mural Trail’s presence, printing of a city walking tour booklet, “Our State” magazine advertising in 2019 and 2020, design of the Quilt Trail logo mural which is across from Good Wood Pizza, and printing of the Lincoln Historical Association promotional brochures.

For more information on Hartcrafters, which is located at 150 Joshua Court in Lincolnton, visit https://www.hartcrafters.com or call (704) 735-8944.