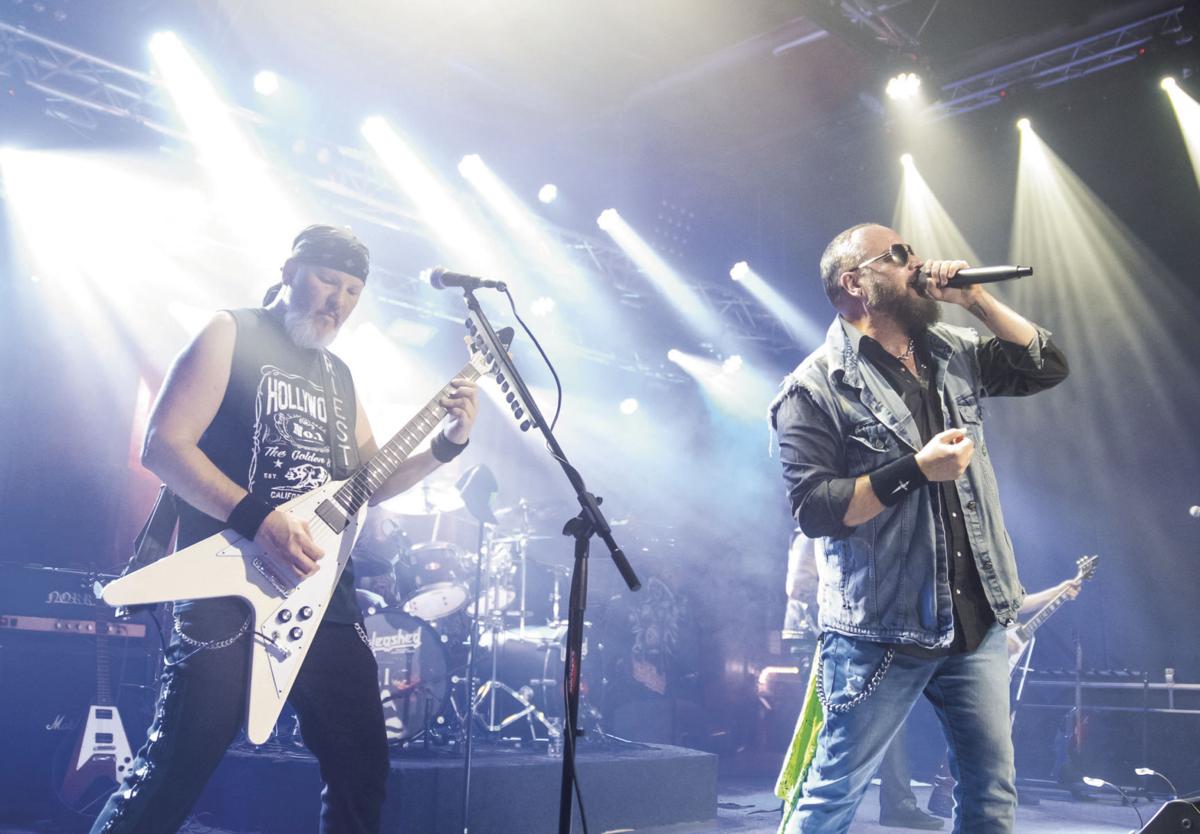 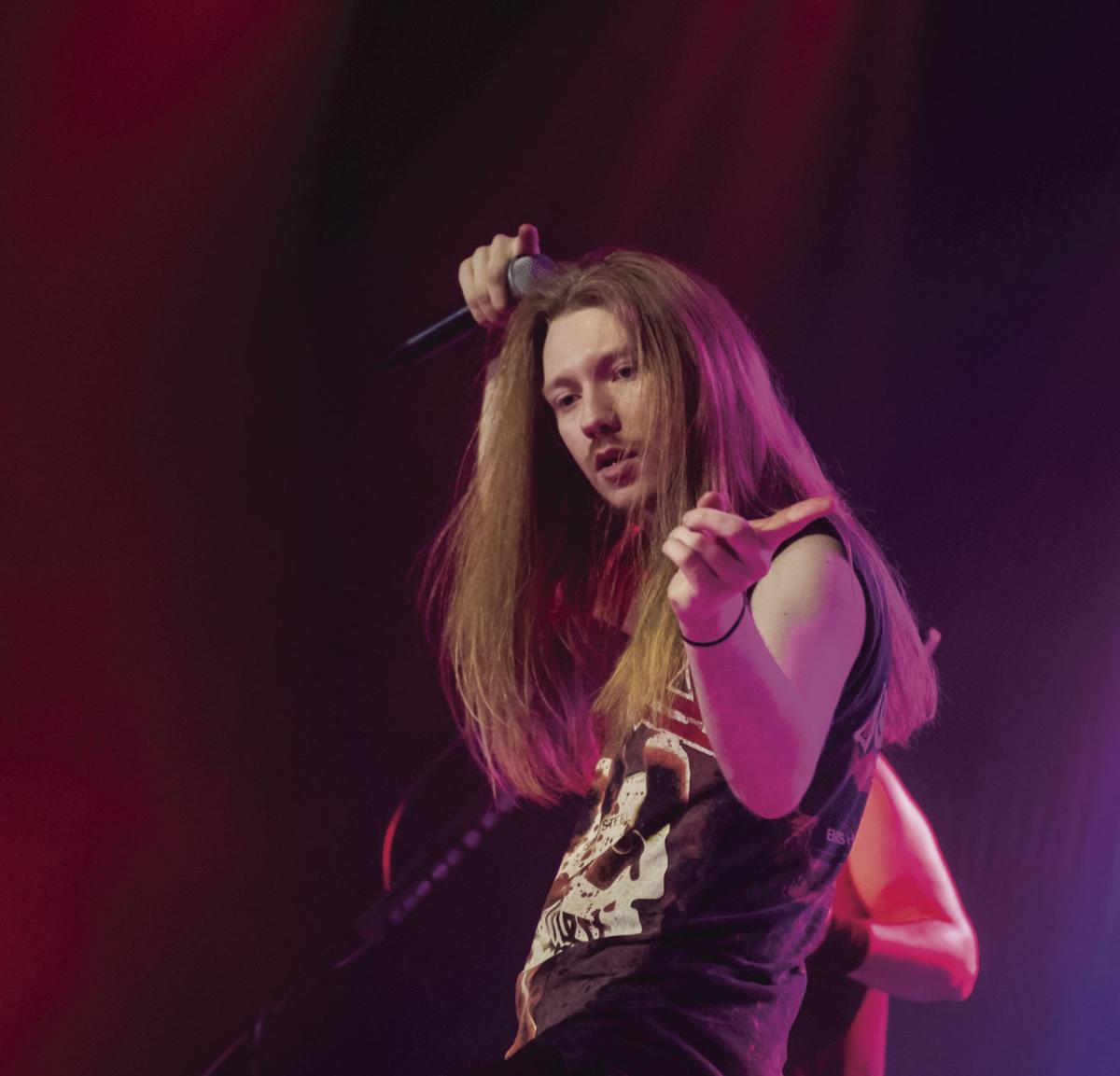 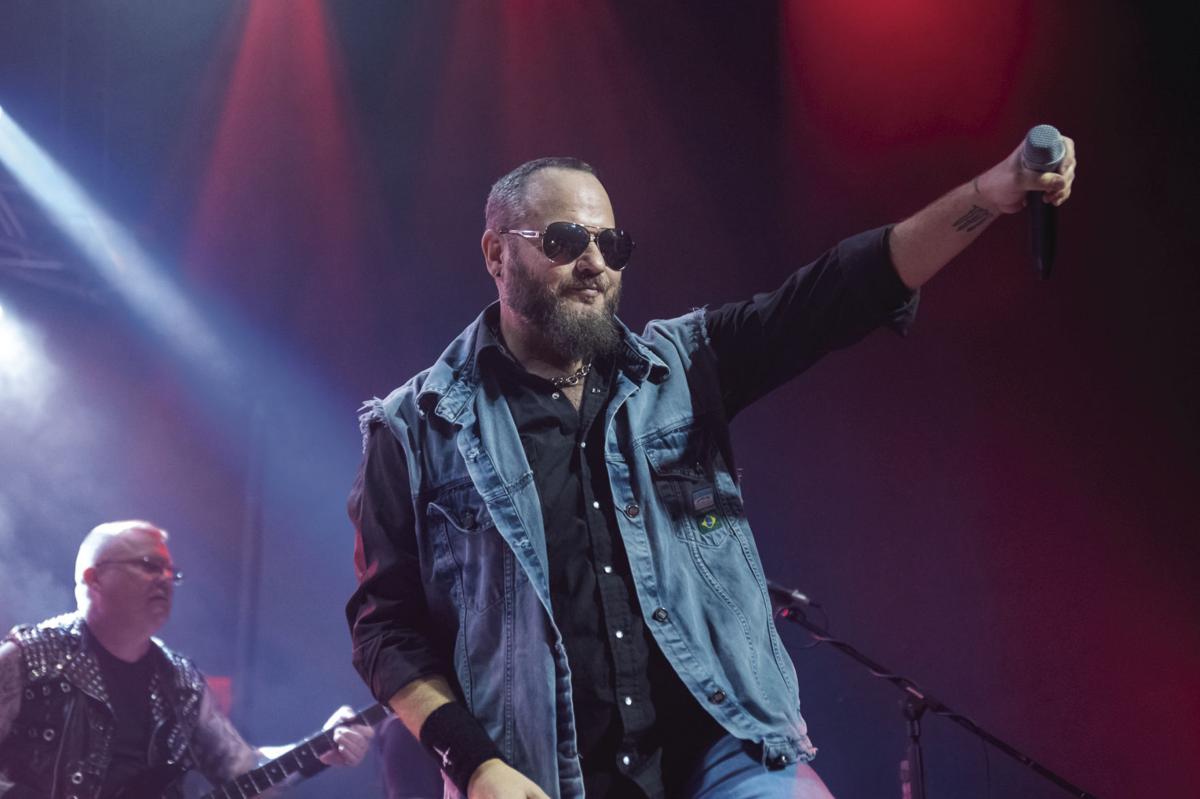 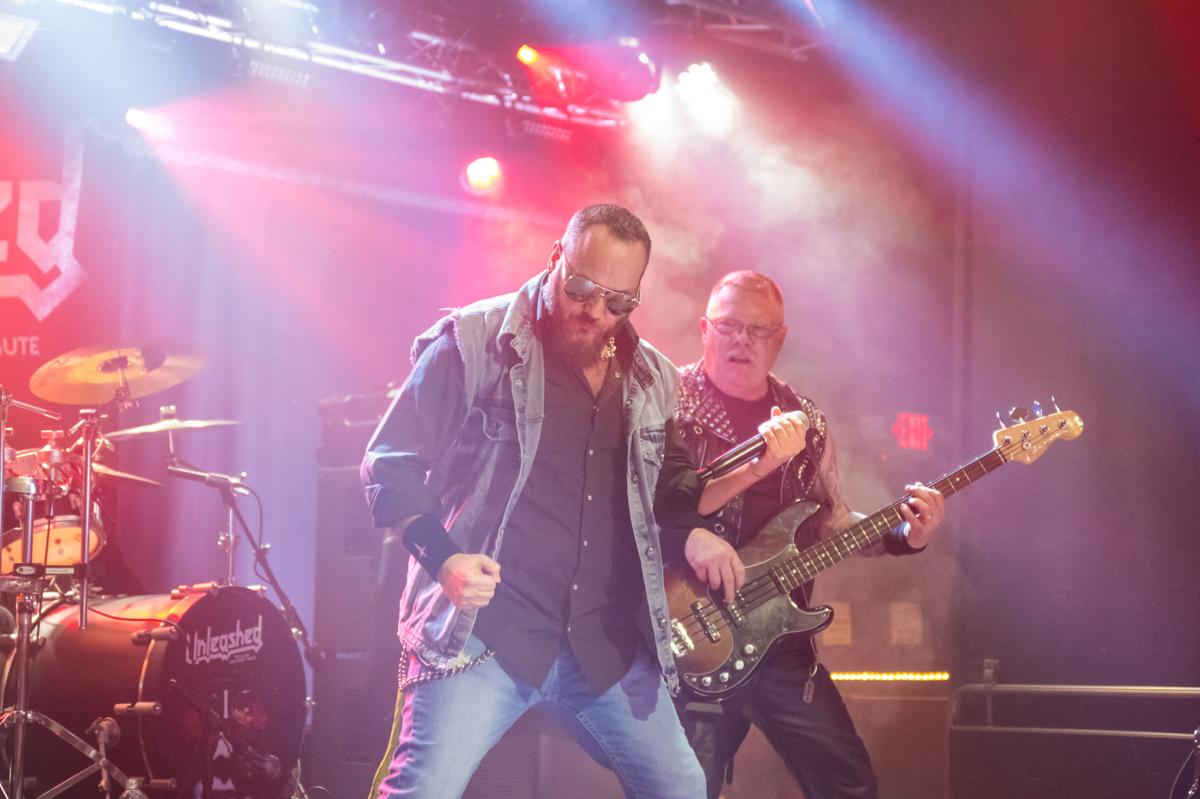 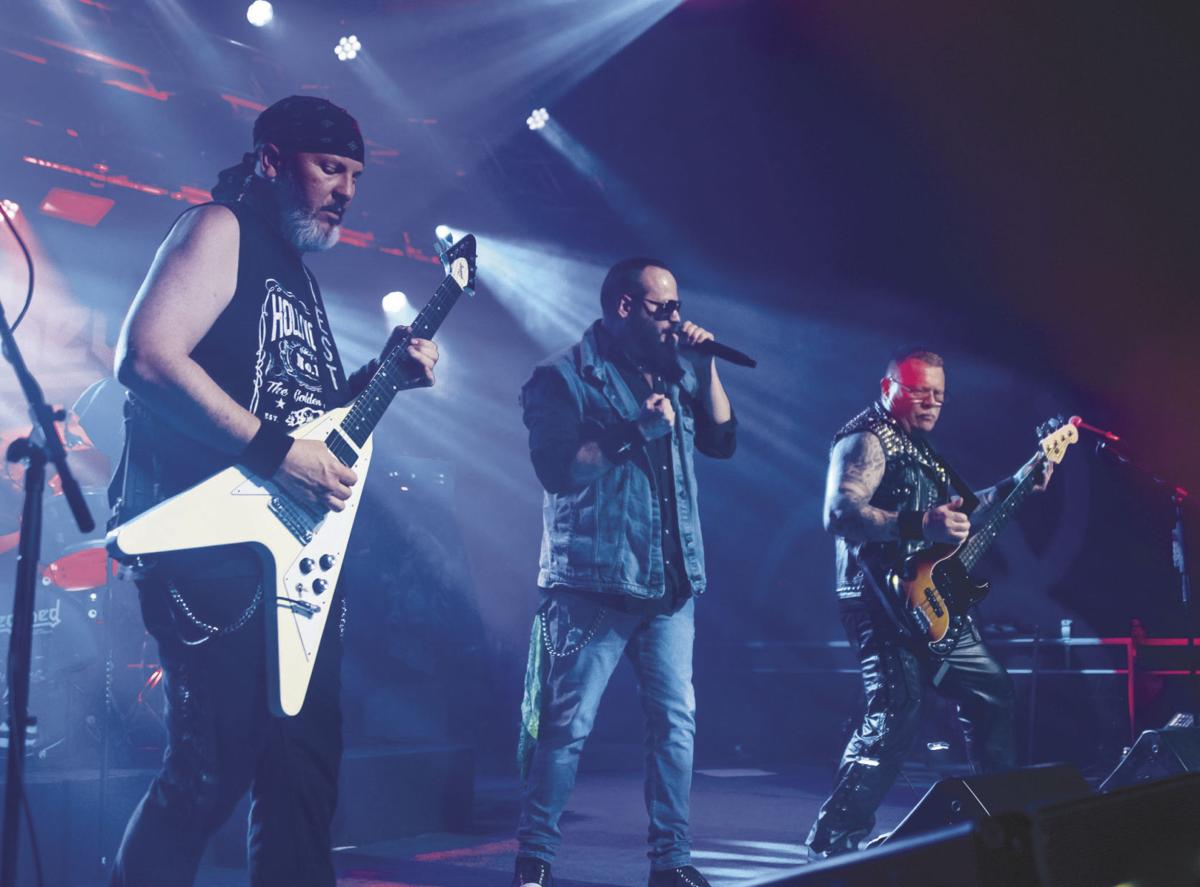 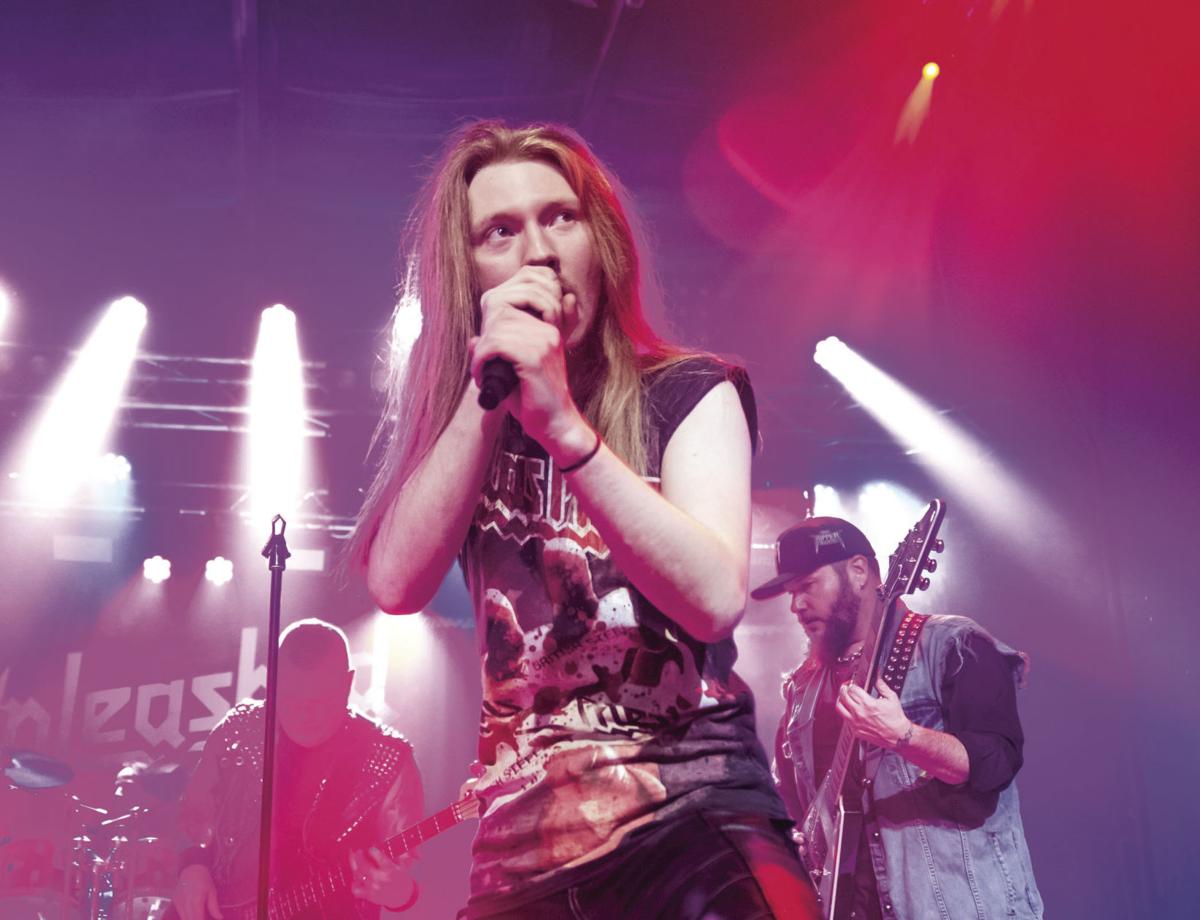 A packed audience met the five members of “Unleashed” when they walked on to the stage at Apps & Taps in Mooresville. The energy was high, the crowd was loud and got even louder when special guest singer, Tim “Ripper” Owens, former lead singer for the English heavy metal band, “Judas Priest,” came on stage.

Two of the “Unleashed” band members are from Lincoln County, including Vale resident and lead singer, Dillon Reynolds, and Robbie Norris, who provides lead and rhythm guitar, as well as vocals, and lives in Pumpkin Center. Gil Bush, lead and rhythm guitar and vocals, Dave Meyers on bass and vocals and drummer Joe Costa round out this “Judas Priest” tribute band.

Before they went on stage, all five members admitted to being nervous that Owens was going to be singing with them, yet it was a dream come true.

“I asked Ripper to do it with us close to two years ago,” Norris said. “He’s tried to come several times but with schedules and his touring, it didn’t work out until now. We know how to play the music he likes to sing, which includes music other than just ‘Judas Priest’.”

A relatively new band, “Unleashed” has been together for less than a year.

“We’ve only done a few shows,” said Reynolds, who at 23 is the youngest member of the band. “We try to stick to fewer shows with higher quality. We don’t want to be a bar hopping band. We do a show every six weeks or so and make it one that counts. We don’t want to oversaturate the market.”

At first, Reynolds, who graduated from West Lincoln High School in 2014, was reluctant to commit to “Unleashed” because he had a lot of work going on, but Norris was persistent and eventually he gave in to “make him quit bugging me.”

“I can say though that it was the best decision I’ve ever made,” he said. “We’re like a family now. There’s not a group of people I’d rather be on stage with anywhere. That sounds weird from a guy who’s 20 years younger than the next guy up, but I love spending time with them.”

Owens actually lives the life of a rock ‘n’ roll star, traveling all over the world performing as lead singer, either solo or for several different bands.

“The organizer will usually put a band together for me,” he said. “These (like the one in Mooresville) are the kind of shows I enjoy doing. I don’t have that much time to do it anymore.”

The life of a rock star isn’t as exciting as everyone thinks it is, Owens admitted. He was 28 when he was picked up as the lead singer of “Judas Priest.” Formerly a part of a tribute band himself, Owens was playing his last song with a particular band and it was videotaped. The recording ended up in the hands of “Judas Priest.” It was almost a year later before he got that phone call that changed his life.

“The first thing I did was get the name of the person and check the band’s albums to make sure the name was there,” he said. “They asked if I had a passport and if I could get there to audition.”

This was on a Saturday night and Owens was flown to England on Monday.

“They didn’t even want me to audition because they had already heard me,” he said. “They just wanted to meet me to make sure I wasn’t an ‘LA Rock Star’ (fake). The funny thing was they called me back the Sunday night before and they asked if it was really my voice in the recording. The band was so bad they wanted to make sure it was really me.”

In the year since the videotape was made, Owens said that he hadn’t performed any “Judas Priest” songs, so when he did go to England to audition, he did so without any previous practice. Now touring a lot as a solo artist, Owens was lead singer for “Judas Priest” from 1996 through late 2003.

“Now I’m in demand to work with bigger artists,” he said. “People I grew up with watching but I’ve worked hard, I still work hard to do it. I’ve kept a good mind and took every lucky break that I got. It’s funny, the older you get, I’m in my 50s now, it’s a little bit different.”

Unlike a musician who plays an instrument, Owens explained, a singer could just get up and not have a voice. That he’s had such a long career as a singer is a blessing.

Owens traveled to North Carolina with his two children, Timmy, 16, and Taylor, 14, who are both singers, but neither are interested in singing heavy metal music like what their father sings.

“I’m probably the most nervous one because one, I have to watch them play without me, and then I have to go on after Tim,” said Reynolds as the band got ready to go on stage. “Those are some big shoes to fill.”