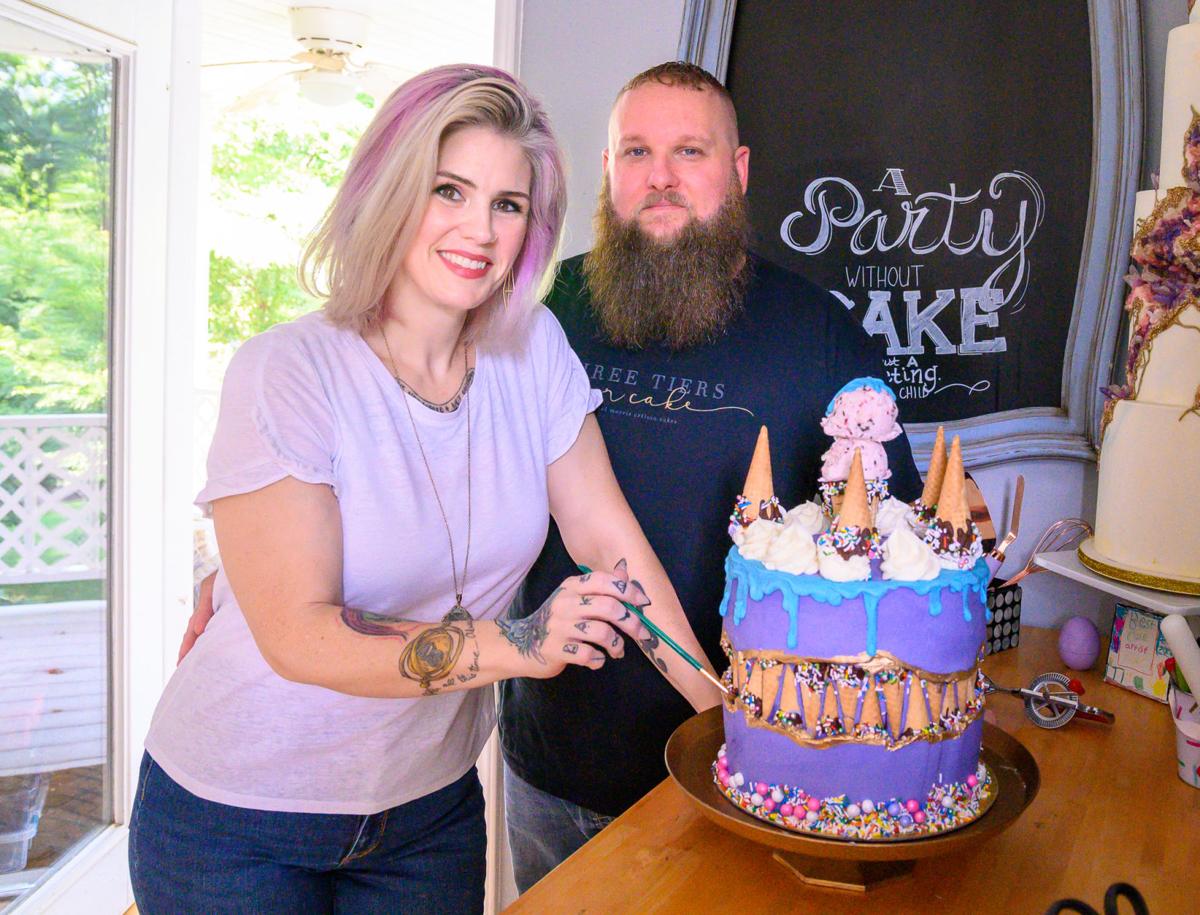 Rachel and Matt Morris with a cake that they just finished baking and decorating. The couple will be taking part in “Sugar Rush,” a competition airing on Netflix on July 26. 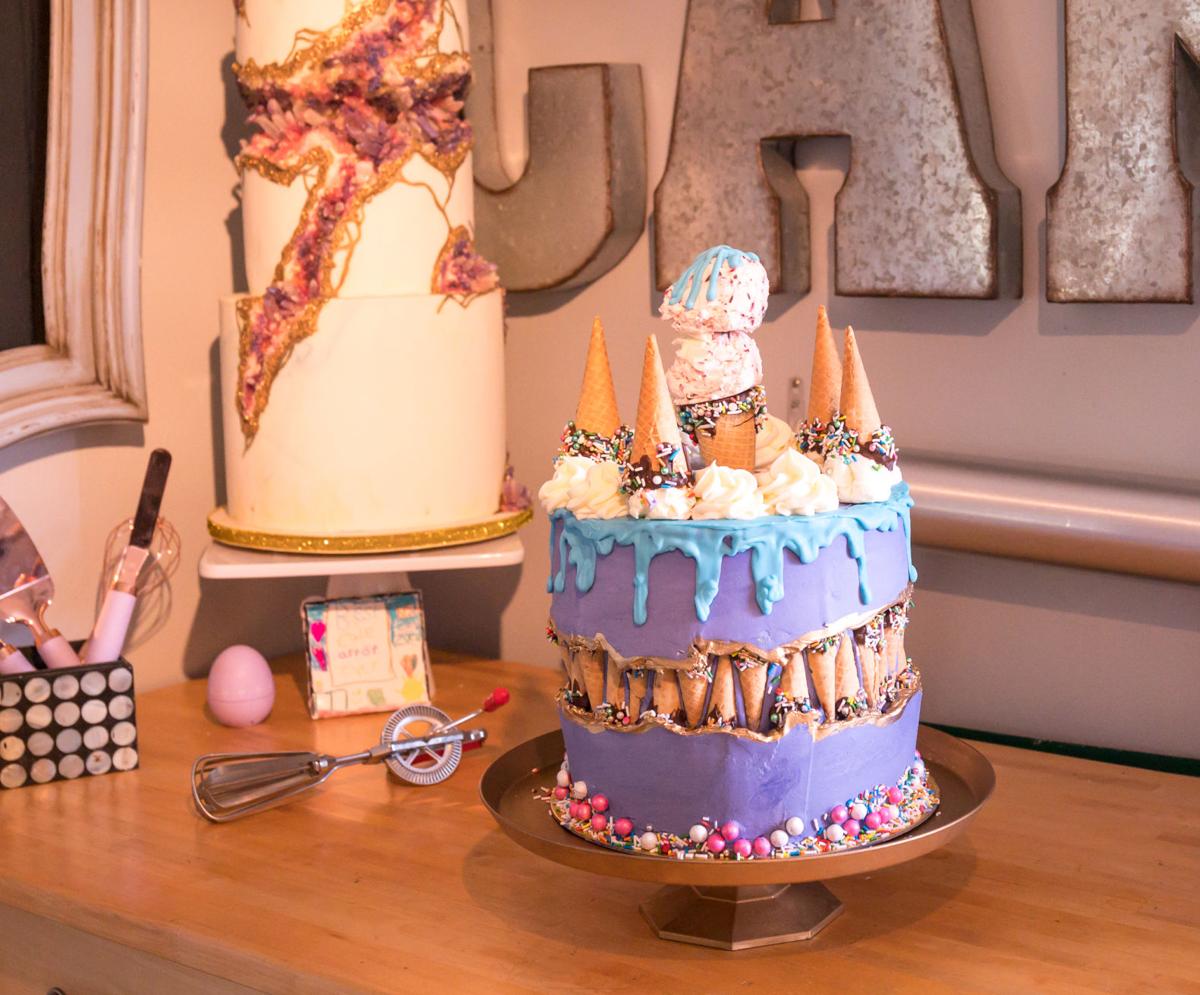 One of the many cakes that Rachel and Matt Morris have been creating together. The couple will be taking part in “Sugar Rush,” a competition airing on Netflix on July 26.

Rachel and Matt Morris with a cake that they just finished baking and decorating. The couple will be taking part in “Sugar Rush,” a competition airing on Netflix on July 26.

One of the many cakes that Rachel and Matt Morris have been creating together. The couple will be taking part in “Sugar Rush,” a competition airing on Netflix on July 26.

Cake icing makes the marriage of a Denver couple that much sweeter. Rachael and Matt Morris have combined efforts to make stunningly beautiful, gravity-defying custom cake creations that have attracted the attention of Netflix producers. The couple will be competing in season two of “Sugar Rush,” which will air on Friday, July 26.

Rachel Morris’s journey as a cake artist began in 2011 when she made an “awful” Harry Potter cake she baked for her son, Keith. Her skills grew over the years, through practice and watching YouTube videos. She now runs Three Tiers for Cakes, making custom cakes for the Charlotte/Lake Norman area.

In October, 2017, Morris took part in Food Network’s Halloween Wars. She competed on a team with two other women that she had never worked with before. Unfortunately, the team was voted out after the first round but Morris said that she gained a tremendous amount of knowledge and confidence while competing in this show. It also grew the business.

Morris’s husband, who works full-time at McGuire Nuclear Station, has always helped out behind the scenes making the cake forms and helping with nerve-wracking deliveries (these cakes with all their icing flowers and other carvings are extremely fragile and a single bump could destroy the entire cake), but he preferred to stay out of the limelight, until now.

“She’s always had a time management issue,” Matt Morris said. “She has an artistic brain so she tends to go over the top and not make deadlines. With the more orders she took on, the bigger cakes and charity events that she started to contribute to, I saw a need to fulfill more of a role than what I was.”

Now Matt Morris does more than cake forms and deliveries and the couple has discovered that he has a knack for it. Rachel’s time management got better and she’s now able to deliver cakes on time. Now Matt Morris comes home from his full-time job and starts helps with the cake business.

Rachel Morris was approached by the producers of Sugar Rush to try out for the show. They asked if she had a friend who could compete with her and she immediately thought of her husband. Normally, the notice given to compete in this shows is short and it might have been difficult for Matt to go with her. That wasn’t the case for this show, as they were given enough notice for Matt to get time off from work.

“There was a lot of time pressure with this show but without the drama,” Matt Morris said. “We were able to use our skills to create the best thing we could in the time given. It was challenging but fun.”

The couple were put outside of their comfort zone but they both welcomed that because it helps with growth.

“From the minute that they said we made the show, we both had a pit in our stomach,” Rachael Morris said. “It’s nerve wracking. You’re setting yourself up for people to judge you and not just the judges. You’re judged on not just your skill level but your clothing, your look and your personality.”

Given this type of show is done under time pressure, Matt Morris said, contestants aren’t always at their very best, no matter how good they are. Mistakes are made and sometimes they may look like fools. In addition, working so closely together, under this kind of pressure, can put a strain on any relationship. Prior to beginning with this endeavor with Netflix, the couple made a pact that the health of their marriage came first.

“We know how to push each other’s buttons but we also know how to support each other,” Rachel Morris said. “You never know when you’re under stress if it’s going to be a button pushing situation or not. We went into this knowing that our marriage was very important and anything that we do in the food industry will not be done at the expense of our marriage. Our main goal was to put ourselves outside of our comfort zone and to do it where our marriage was our top priority. I think we did a really good job.”

The first round of Sugar Rush was cupcakes, the second was confections and the third was cakes. It was the second round which worried the Morris team the most because they don’t normally make pastries. As soon as they found out that they were going to make it into the show, they started to make pastries at their home baking studio. They tested the results on their neighbors. Some of the creations were well accepted, others were not. In general, their neighbors and friends are well fed on cakes and other sweet treats all throughout the year.

“Every day after work we were baking,” Matt Morris said. “It was like culinary boot camp.”

Sugar Rush, which launches on Friday, July 26 on Netflix, is a fast paced competition that challenges bakers to create treats that look beautiful and taste amazing, all against the clock. But in this show, it’s not the judges who stop the clock, it’s the contestants themselves. The show is hosted by Hunter March (host/comedian), with judges Candace Nelson (Sprinkles cupcakes owner/judge), and Adriano Zumbo (judge/pastry chef). Dan Cutforth and Jane Lipsitz from Magical Elves (production company behind Top Chef and Project Runway) are executive producers.