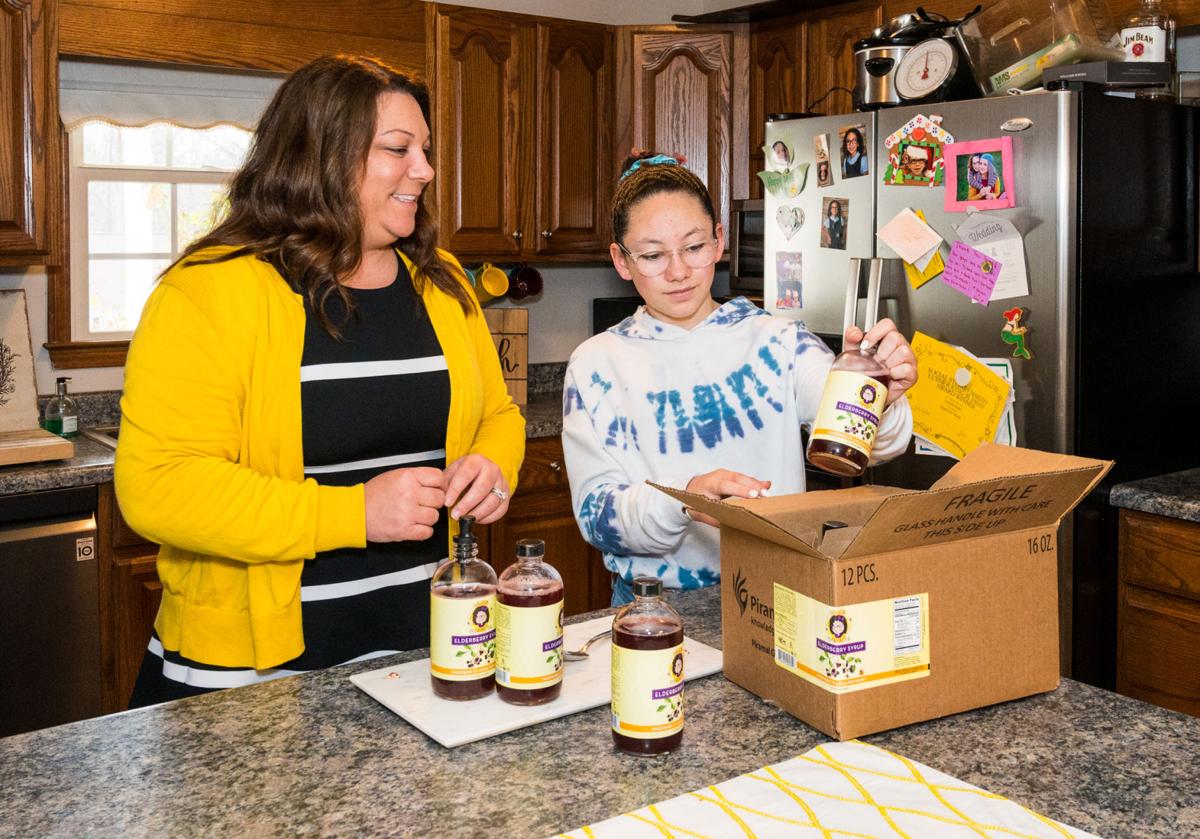 Cindy and Laylah Hunt package elderberry syrup to be shipped. 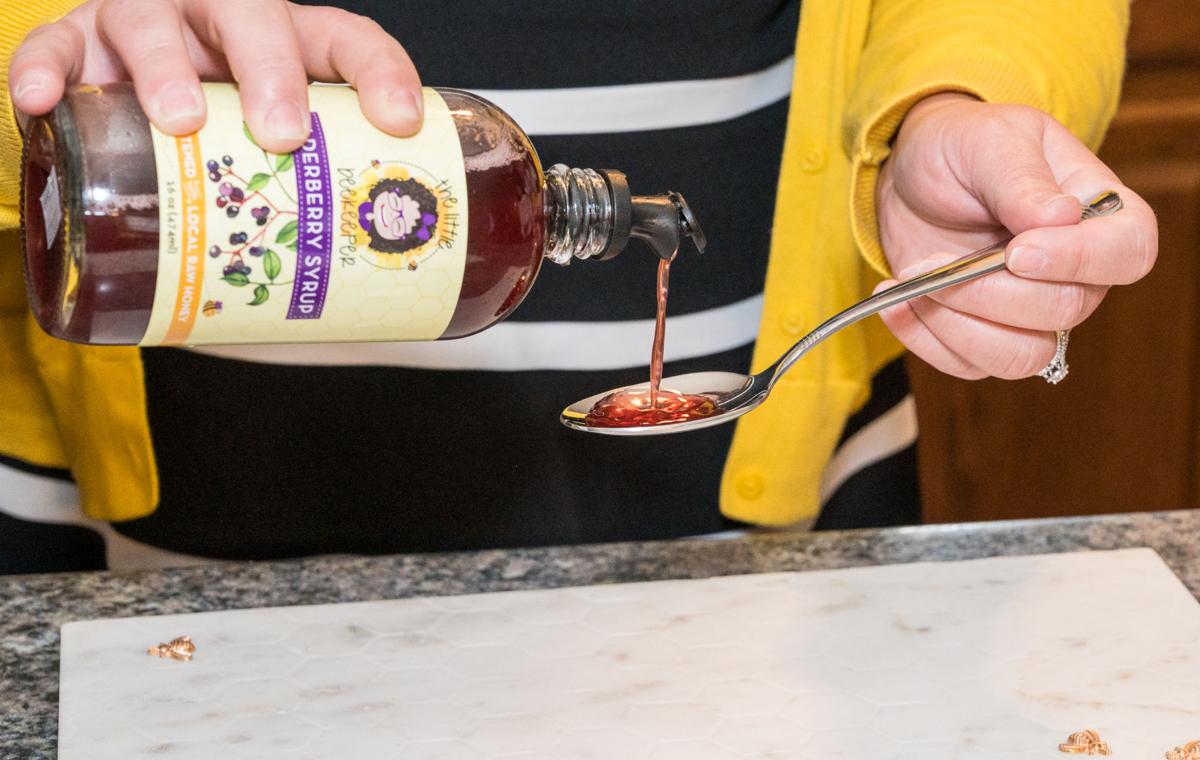 A tablespoon of elderberry syrup per day is the regular adult dosage. 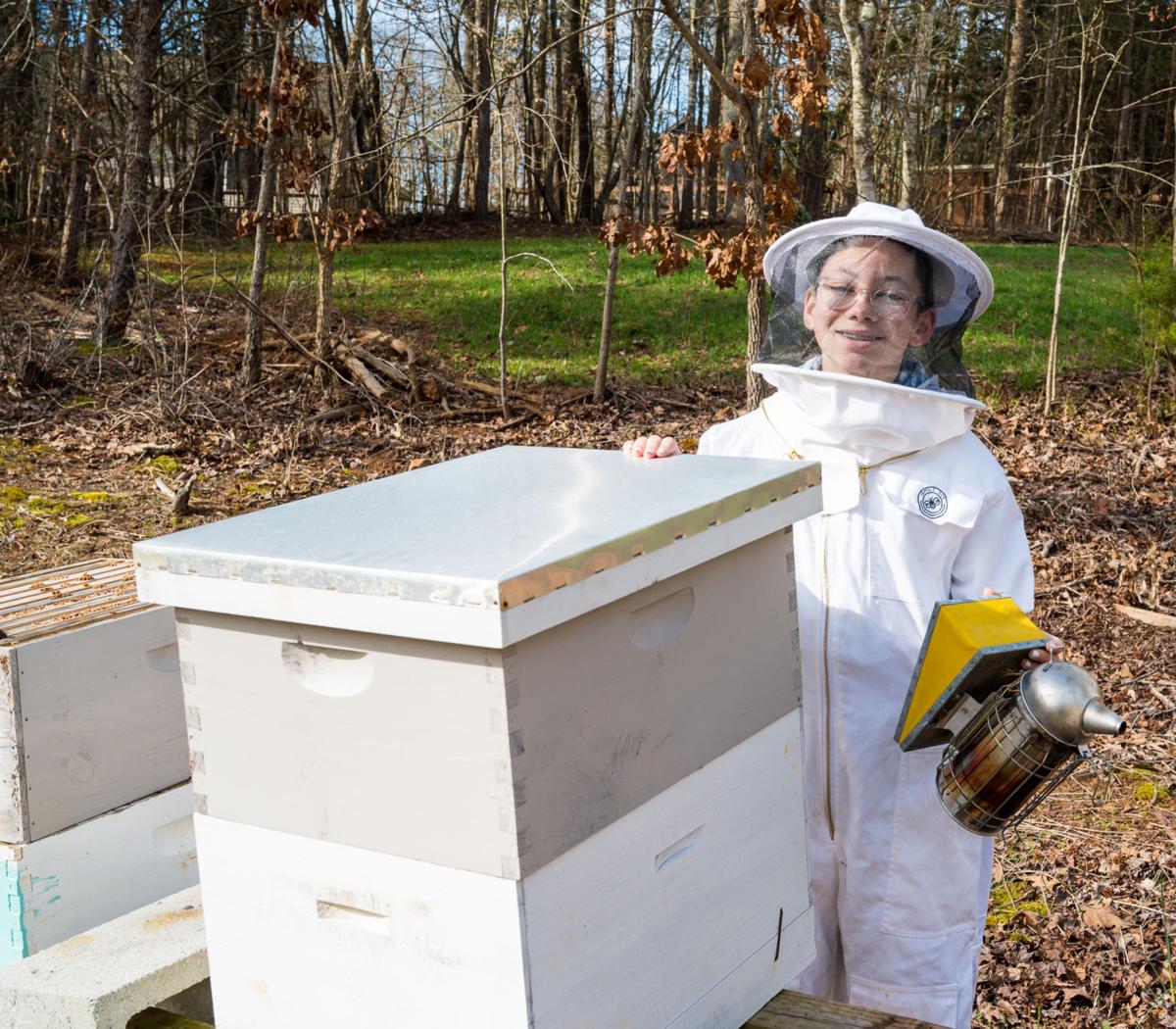 Laylah Hunt inspects one of the beehives at the Hunt family home in Pumpkin Center. The honey that the bees produce is used in the elderberry syrup the family markets.

Cindy and Laylah Hunt package elderberry syrup to be shipped.

A tablespoon of elderberry syrup per day is the regular adult dosage.

Laylah Hunt inspects one of the beehives at the Hunt family home in Pumpkin Center. The honey that the bees produce is used in the elderberry syrup the family markets.

This is normally a busy time of year for the Hunt family as they prepare, package and ship elderberry syrup. Ever since flu season started, orders have increased. With the onset of coronavirus, however, demand for their product has closed to tripled.

Cindy Hunt made her first batch of elderberry syrup in 2014 and was making it off and on as the family needed it. The family got into beekeeping in 2015 and started to use the honey that their bees produced to make elderberry syrup.

In 2018, during a bad flu season, Hunt made up a batch and had some extra so she posted on Facebook that she had a few mason jars left, would anyone it?

“By the end of the night, I had 40 orders,” she said. “We started selling it to friends and family. I worked my full-time job and would come home and stay up until 2:00 in the morning but I could only make 40 bottles a night.”

When she realized there was a such a large demand for the syrup she was making, Hunt went through the appropriate channels to get licensed, insured and inspected and started started making the syrup in a commercial kitchen. The business, “The Little Beekeeper,” is named after Laylah, who when she got certified as a beekeeper, was the youngest in North Carolina.

“Now we have over 50 retailers in North and South Carolina,” she said. “We sell off our web site and ship all over the United States. We went from selling 40 bottles every few days to selling 50-16 cases of 12 bottles a week. Since coronavirus hit, that has about tripled.”

Elderberries are nutritional powerhouses and are most often used to treat cold and flu systems. The elderberries that the Hunts use in their syrup are grown organically in the United States and come to them either fresh, when they’re in season, or frozen. They never use dried berries. Unlike blueberries (which are also rich in antioxidants), elderberries don’t taste very good. If Hunt didn’t add honey, lemons, oranges, ginger, Ceylon cinnamon and cloves to the syrup mixture, it would make for a very bitter remedy. The syrup that Hunt makes tastes so good, it’s hard not to drink the whole bottle like juice.

Everything is organic except the honey. Even though the Hunts maintain their beehives using natural remedies and don’t use chemicals at all.

“There’s really no such thing as organic honey because we can’t control where the bee gets the nectar from,” she said.

In addition to fighting cold and flu symptoms, elderberries may also support heart health and fight inflammation and infections, among other benefits.

“Elderberries are scientifically proven to activate your immune system to fight off sickness,” Hunt said. “So, if you’re exposed to something viral like the flu, strep, stomach bug or whatever, it’ll naturally boost your immune system, so it’ll have the power to fight sickness off. If you’re already sick, it’s scientifically proven to reduce the duration so it’s basically the same as Tamiflu.”

Elderberries are very high in vitamin C, dietary fiber and antioxidants in the form phenolic acids, flavonols and anthocyanins. In addition, elderberry may have some benefits for heart health, such as reducing cholesterol, uric acid and blood sugar levels.

The dosage for adults is a tablespoon a day. Children over one year old, take a teaspoon a day. Hunt makes a special syrup for children under one who are eating solids that’s sweetened with raw agave nectar. There’s also a variety that’s not sweetened for those that prefer that.

The business has become so busy, that Cindy Hunt left her medical supply job to make elderberry syrup and maintain the bees full-time. They keep almost 100 hives in Lincoln, Gaston and Catawba counties.

“I tell everyone that I work harder now than I did when I worked,” she said. “We do all our own deliveries. If I’m not making the product, my husband or my mother is. I demo it, we go to vendor events and I do sales calls.”

The Little Beekeeper elderberry syrup is available in Lincoln County at Keever Pharmacy and Health Connection in Lincolnton, the Drug Store in Vale, Sigmon Lawn and Garden and the Red Barn Marketplace in Denver or online at https://thelittlebeekeeper.com, shipping is free. A 16-ounce bottle, which should remain refrigerated, is $25. Honey products are also available, regular raw honey as well as flavored whipped honey and three infused flavors, lemon, bourbon and spicy.