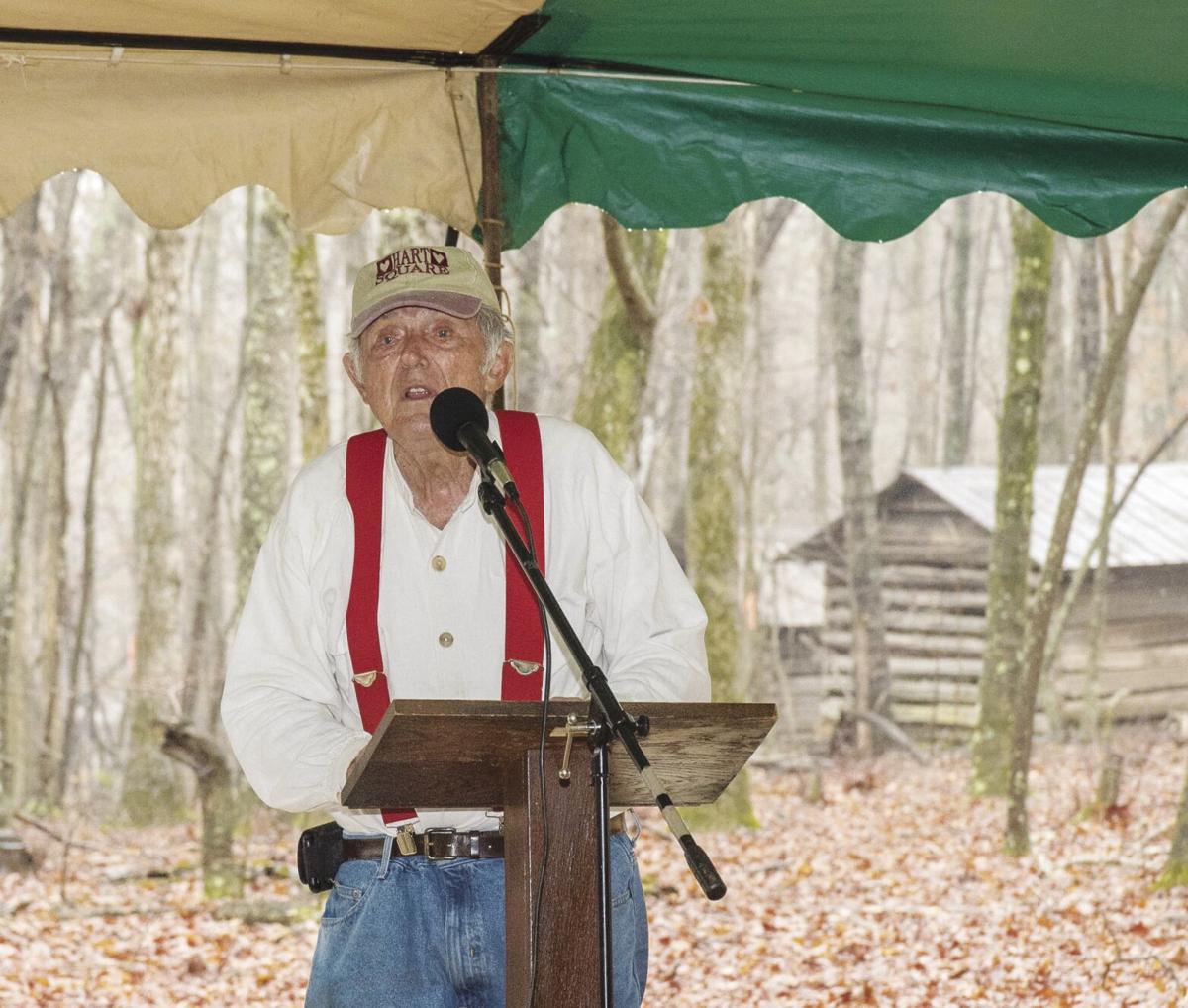 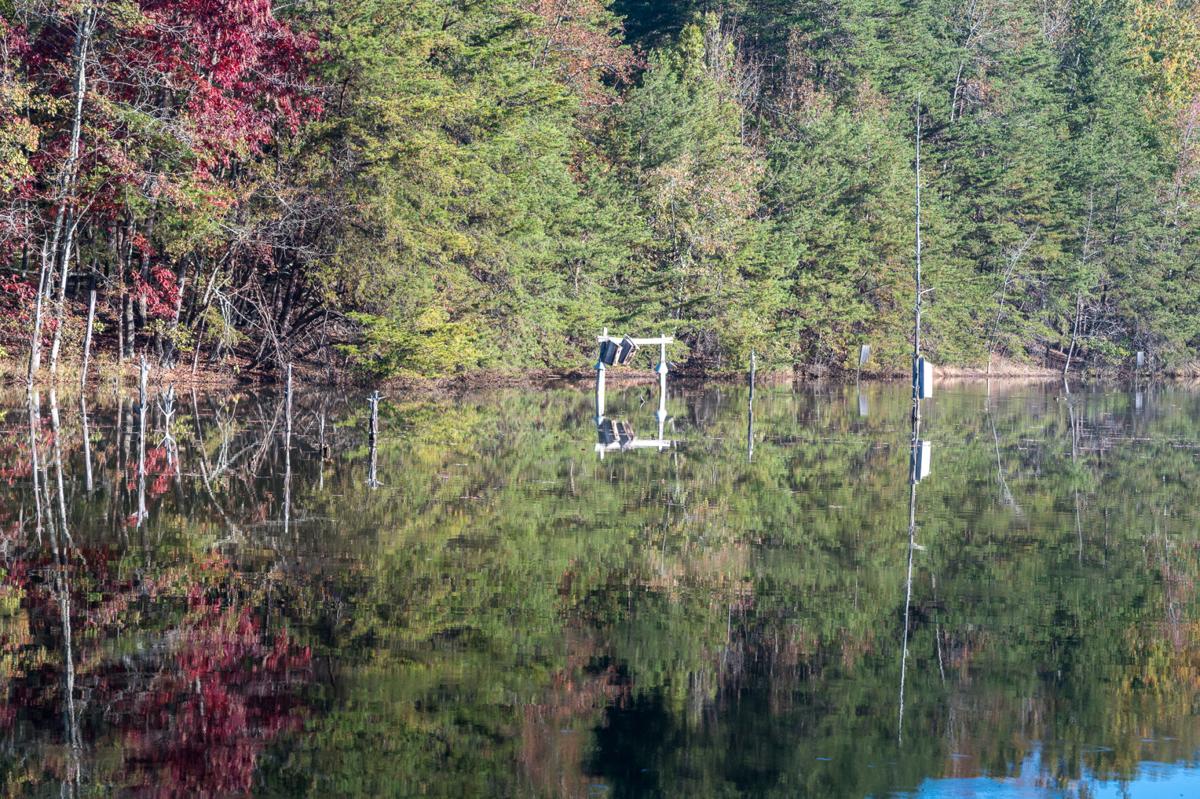 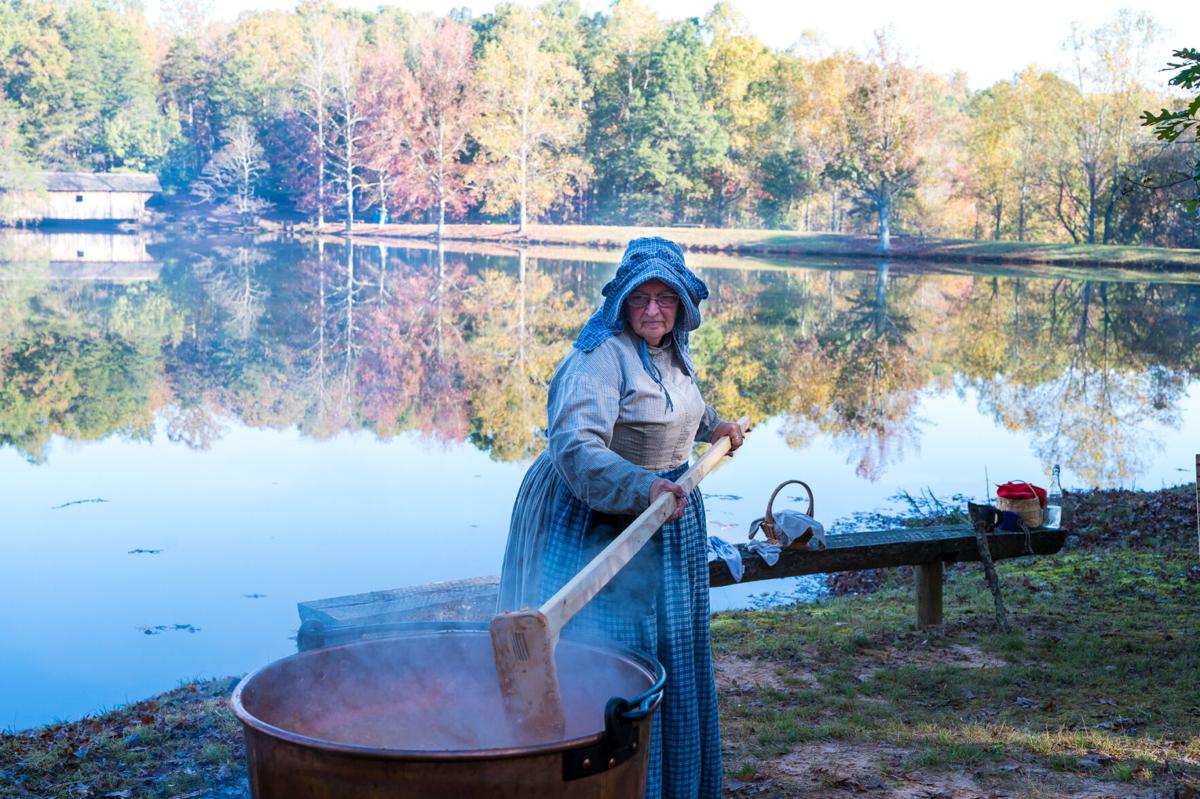 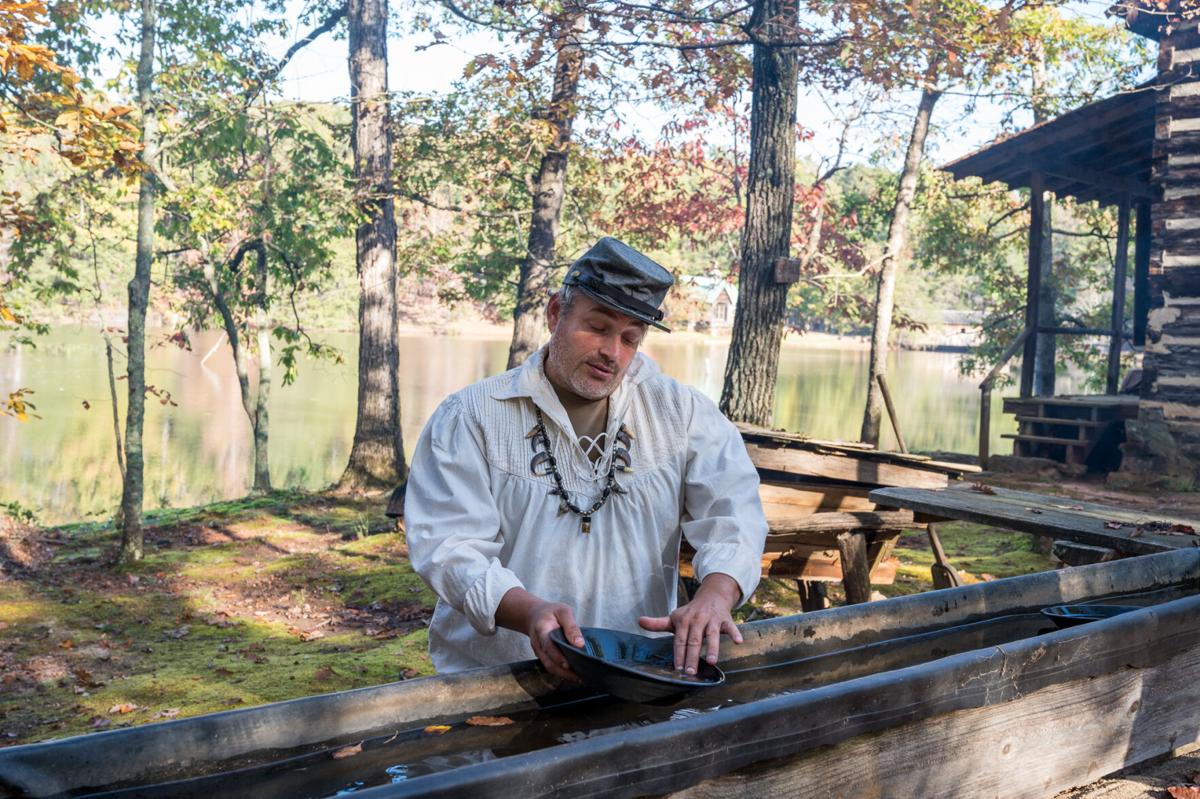 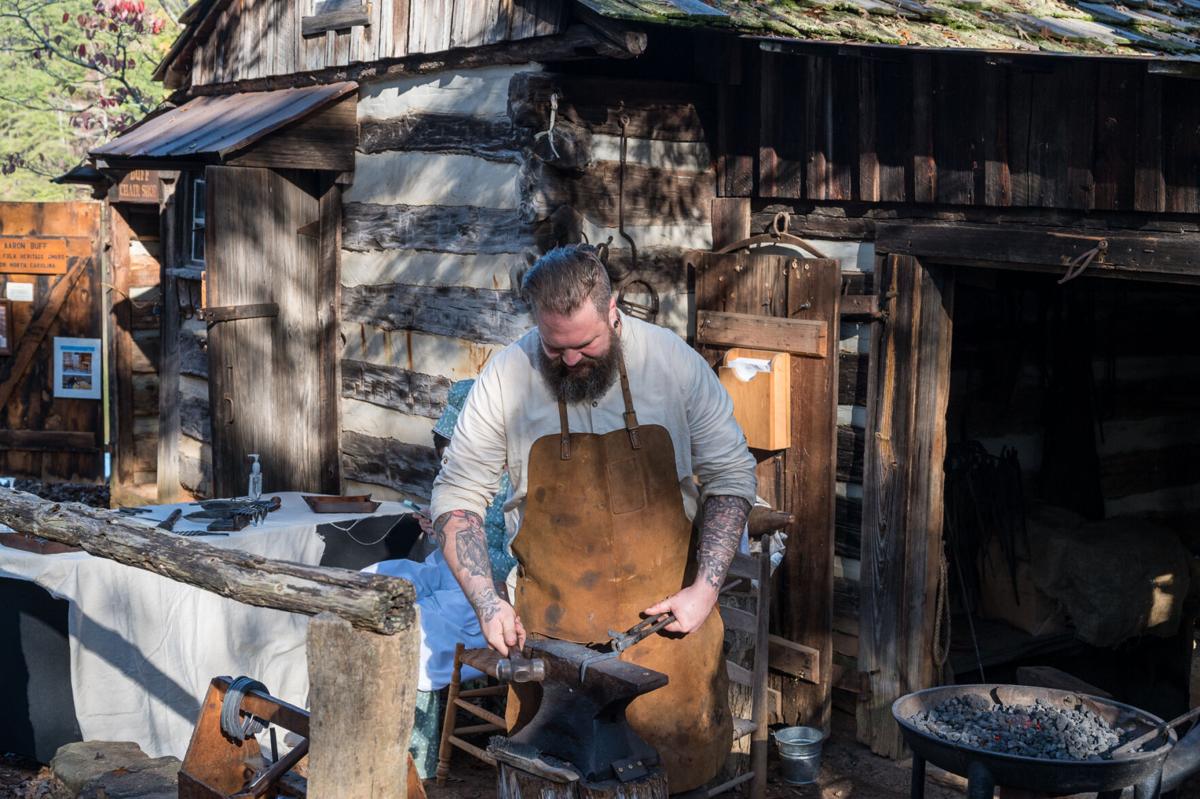 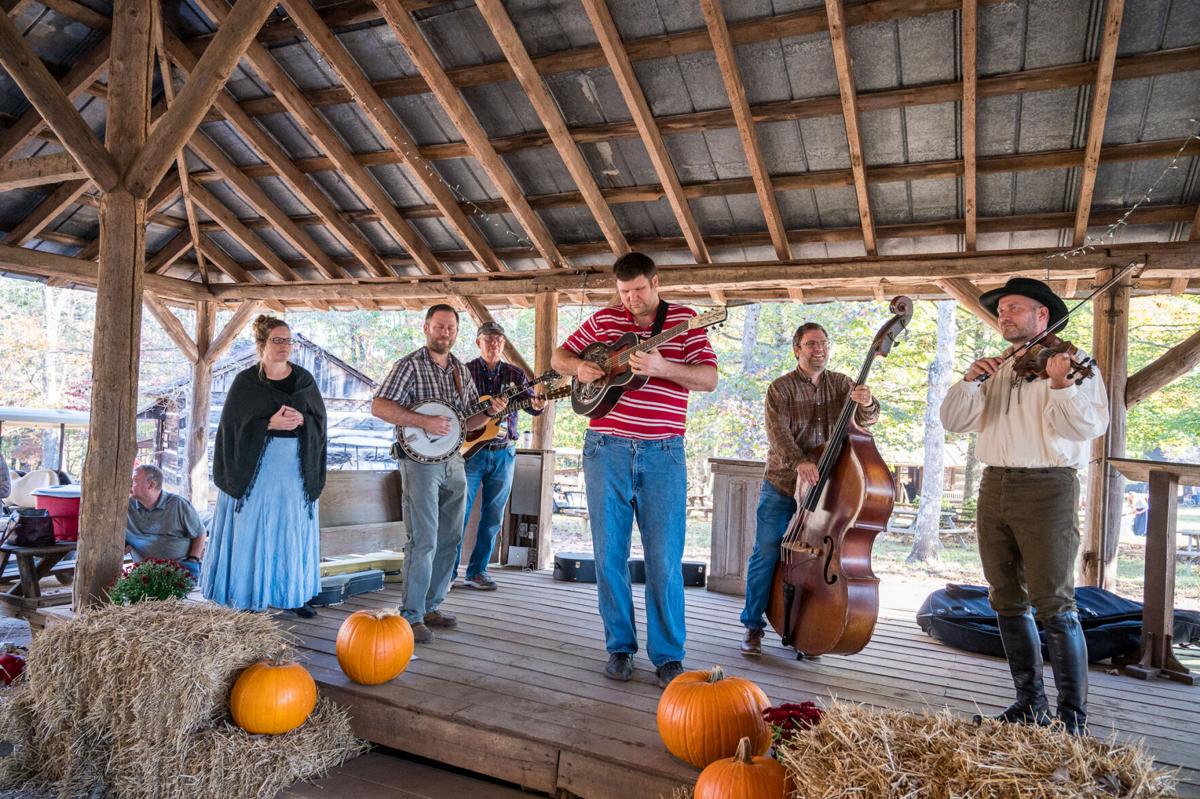 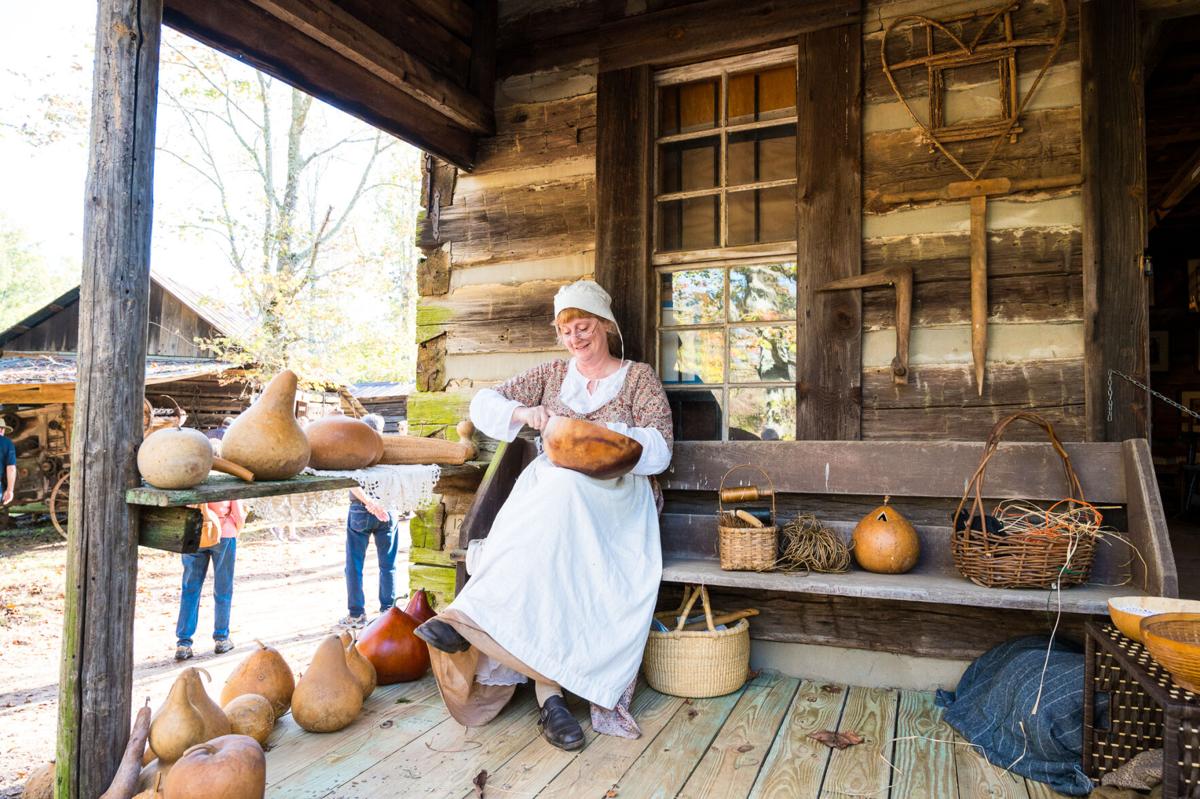 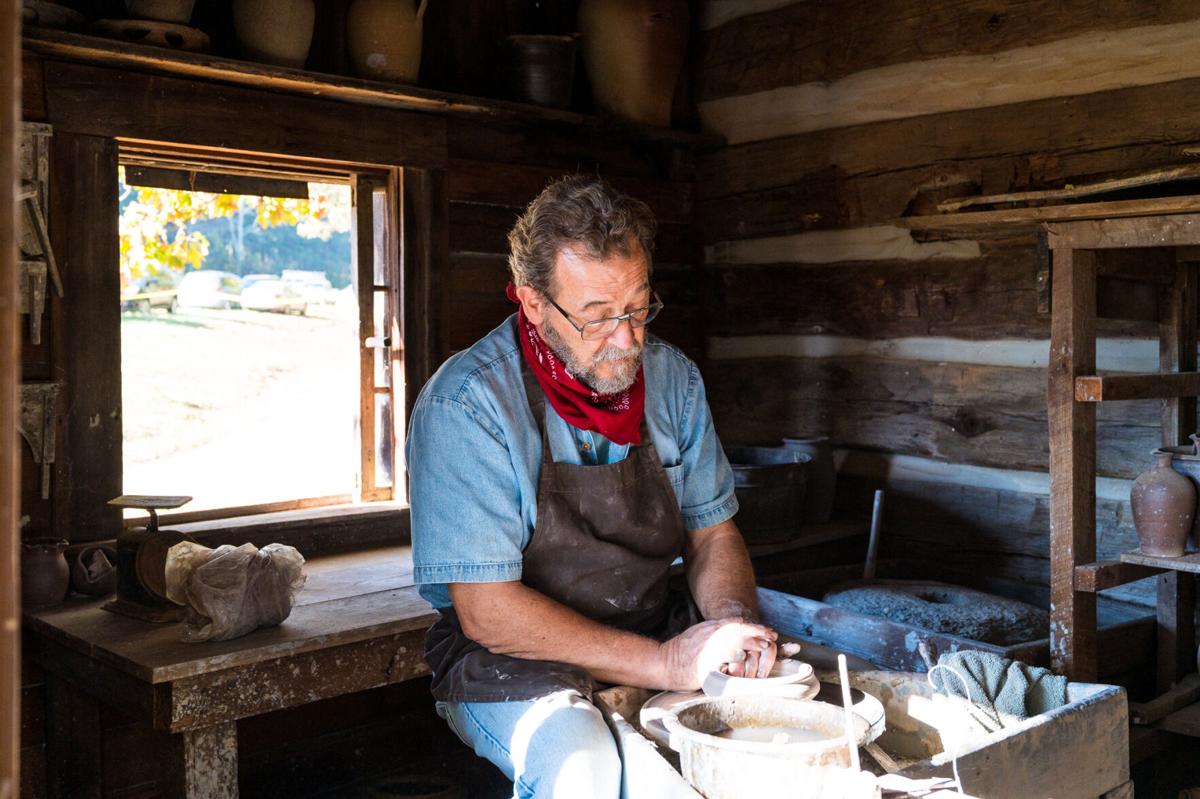 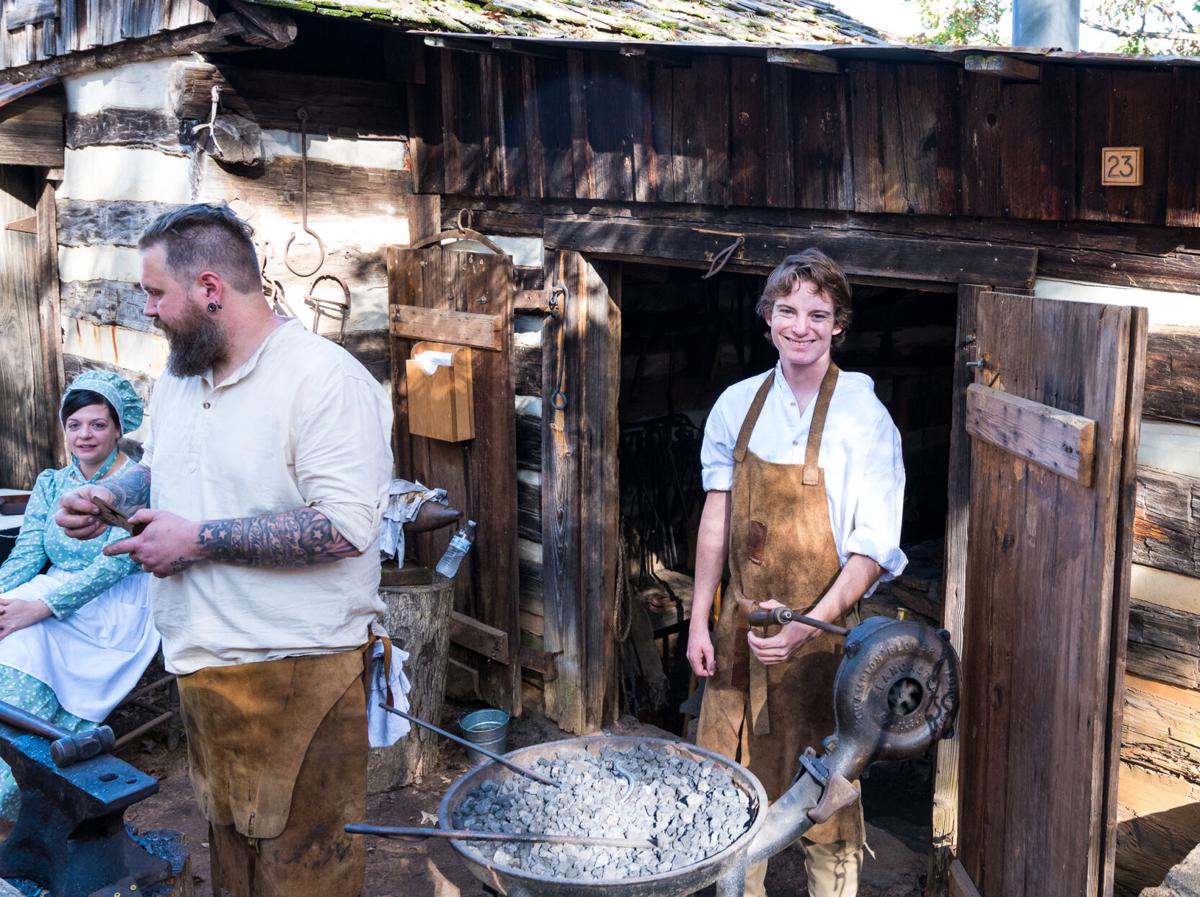 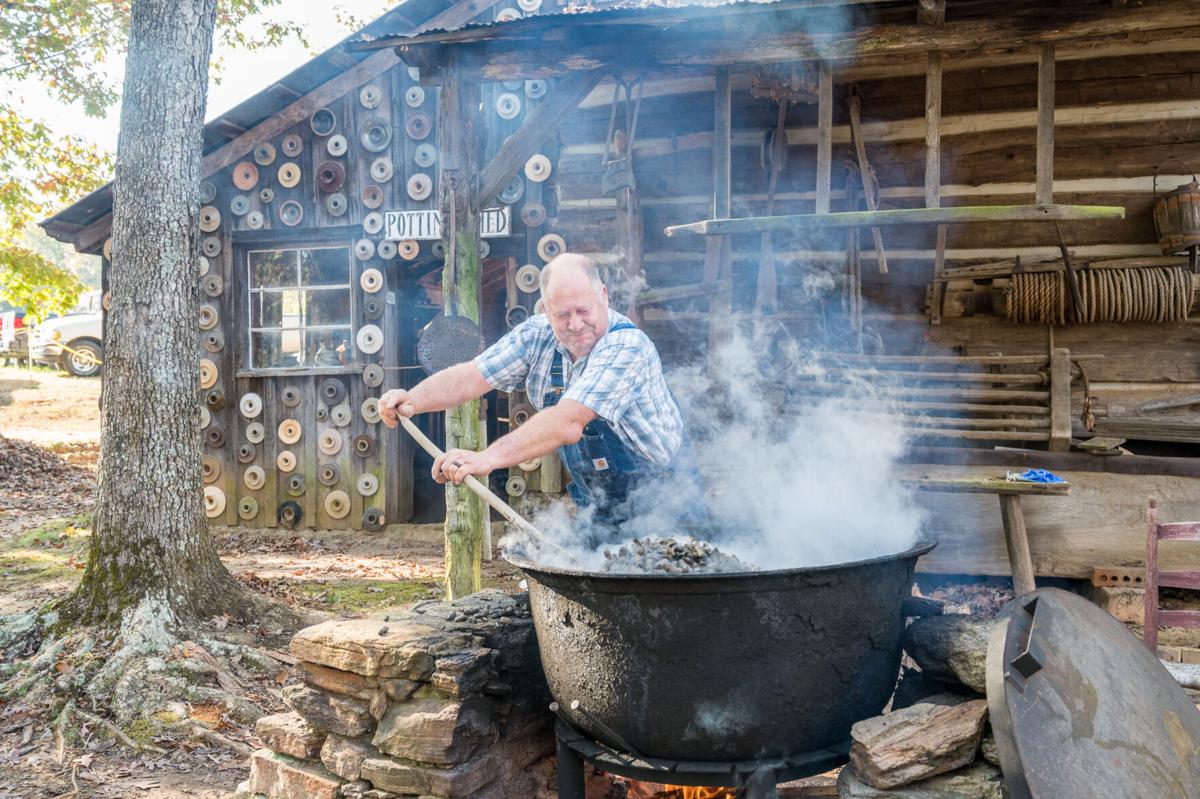 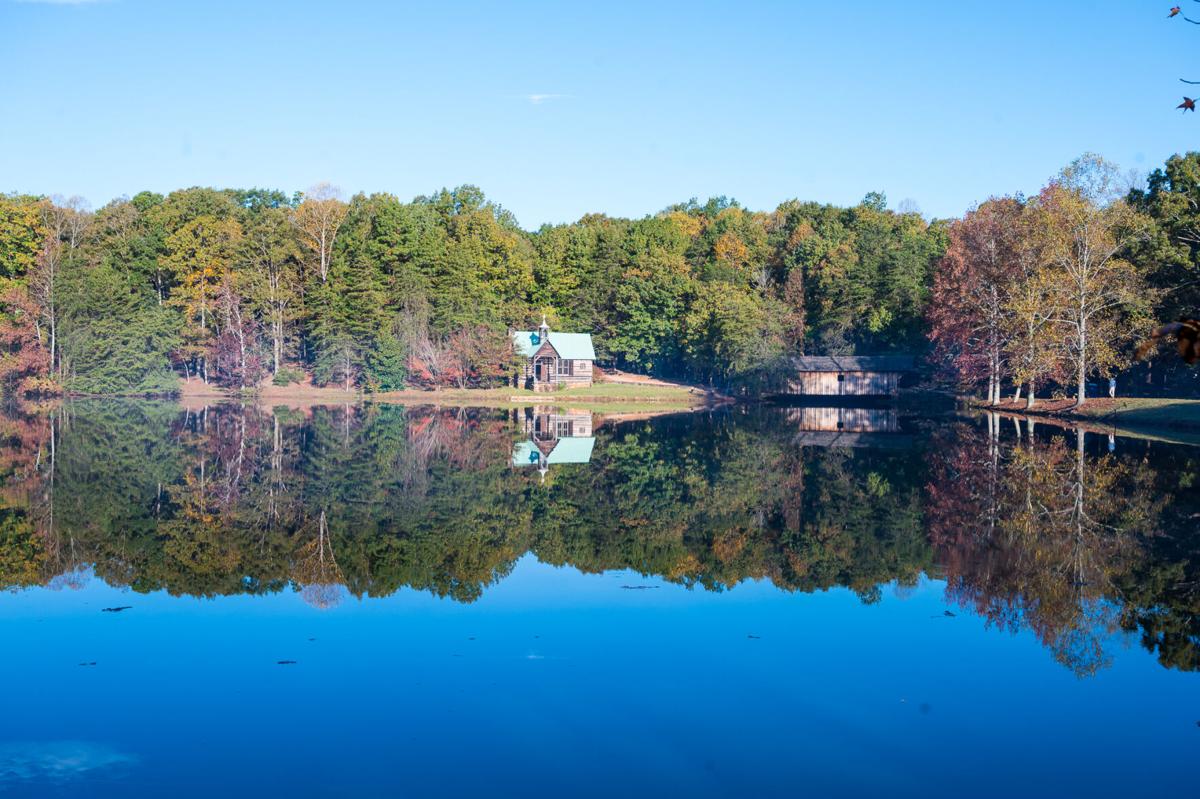 Artisans and traditional crafts people from near and far assemble once a year at the annual Hart Square Festival to perform tasks that were commonplace in North Carolina in the 19th century. This was the 35th annual festival which was pared down considerably from previous festivals in compliance with Catawba County Health Department guidelines.  The festival looked very different and not just because of the masks. The founder, Dr. Robert “Bob” Hart, wearing his signature red suspenders, normally seen on festival days bouncing along in a golf cart, along the root-strewn paths that wind through the village wasn’t there. Hart passed away in March of this year. Anyone who has attended the festival in the past and knew Hart, might have done double takes on Saturday, however, because numerous volunteers and visitors wore white shirts and red suspenders in honor of Hart.

“I met with Catawba County Public Health to see what we needed to do,” Hart’s granddaughter, Rebecca Hart said. “To me, the executive order was confusing. I wasn’t really sure what we were designated as. They helped us write up a health and safety plan that involved temperature checks, handing certain types of food and other precautions. They were comfortable with us doing it outdoors only.”

Normally, thousands of people attend the festival, but the number of tickets sold was cut in half and visitors weren’t allowed inside the buildings. Artisans and crafts people were kept socially distanced from spectators.

Rebecca Hart has now taken over the management of Hart Square which she said feels “pretty weird.”

“Everyone keeps saying it feels like there’s a hole missing,” she said. “He did so much. The reason why the volunteers like coming to this festival compared to a lot of the other historical festivals is because Bob went out of his way to make sure that they had everything they needed. I learned some of those things from him, but he was always moving too fast to get it down on paper. I want to uphold the same standard for the volunteers.”

Jan Stewart who has been volunteering at Hart Square for about 20 years. She started out doing drop spindle demonstrations.

“Dr. Hart found out I made apple butter and asked if I’d be willing to switch and do apple butter,” she said. “One of my friends has a picture she took of me and Dr. Hart last year and she showed it to me on her phone. It was really sad.”

Stewart makes her apple butter at home in the same manner that she demonstrates at Hart Square – in a large copper caldron over an open fire. The open fire adds a smokiness to the apple butter.

“It’s just not the same if it’s not cooked over a wood fire,” she said.

Hart Square Village began in 1973 when a long-time friend of Hart suggested that an old, falling down building would “look great on the new pond you put in.” Hart, a retired physician, had purchased the 200-acre property in Vale in the 1960s to use as a wildlife preserve. The “Hunsucker Cabin” was dismantled and moved to what was then intended to be a nature preserve.  After the cabin was installed, the same friend asked if Hart wanted the barn too, because he had to have a barn, and then an outhouse and a well house.

Then the word got out and people started calling Hart suggesting that he come and look at the cabin that they had on their property to see if he wanted to add it to the collection. Once he had numerous log structures in place, Hart thought that a festival would be a great idea and invited some friends to tour the village. There are currently over 100 buildings on the property, modeled after a North Carolina village from the 1800s, most of them local coming from within five or six miles of the village in Vale.

It’s quite likely that many of these buildings wouldn’t still be standing if Hart hadn’t taken them in. He didn’t just import the buildings, he also took down their history and once they were re-assembled, furnished them with period fixtures. If he couldn’t save a building, he’d set aside the good parts of it to be used in the future. With his endeavors, Hart not only preserved the history of the cabin, but added to the narrative with his own, sometimes hair-raising accounts of how they became a part of Hart Square.

It’s a wonder Hart survived many of these dis- and then re-assemblies. He was fond of saying that he’d “probably used all of my nine lives putting them up.” Not only did he slip off roofs, but he’d had them collapse on him, or he’d fallen on his head, but luckily the ground was soft at that time.

Prior to Hart taking down a building he’d take detailed photographs of the building and he’d numbers pieces. Putting them back together, Hart used to say, was a bit like building with Lincoln Logs. He originally used to use duct tape and a magic marker to label the pieces until one day, deer chewed off the tape. He learned to use a lumber crayon.

To Hart, the primary focus of the village is education, especially of the younger generation.  Hart believed that “to visualize your future, you need to understand the past.” An education center has been constructed on the property with the sole purpose of educating the younger generation. Hart wanted some way to have Hart Square displayed so a lot more people could see it.

“We want to make this a place where these kids can come through, ask questions and realize what their ancestors had to go through for them to have what they have today,” Hart said during the groundbreaking ceremony in 2018.

Hart was able to see the center finalized and opened. Unfortunately, due to COVID it hasn’t been able to be used much. Prior to COVID, some 3,500 school children would visit on field trips on a yearly basis.

Keeping up with the grounds is a full-time plus job. Much of it was done by Hart himself. Keith Saunders has been the caretaker of the property for the past eight years, the festival this past Saturday was the 11th he’s been involved with.

“Being the only person who lives out here, the thing that me and my family have talked about is we saw him every day,” he said. “You’d either see him rolling around in the (golf) cart or his truck. A lot of times he’d stop at the house and talked to the kids and have a slice of pizza with us if we were eating supper.”

It’s not totally sad for Saunders though because not many people leave such an amazing legacy as Hart Square. His children were young when they first came to Hart Square and were able to get to know Hart and hear many of his stories as they grew up. Saunder’s wife is an experienced seamstress and he’s lost count of how many pairs of jeans or jackets that she’d repair for Hart. She also made many of the curtains in the cabin.

“He did all of this,” he said. “It’s a bittersweet thing. I’m a glass is half full kind of guy and while I’ll miss him, I’ll always be thankful for the memories we had instead of looking what we lost. Just being a part of letting this go on – which is what Dr. Hart wanted. He wanted it to be something that people could enjoy. I’m glad that I knew him and still get to be a part of all of this.”

Hart passed away on March 15, right before North Carolina was shut down due to COVID. His family was able to go to the hospital with him and stay there. Hart had expressed a desire to die at Hart Square, so his family brought him back to his favorite cabin. He was in a coma at the time, disconnected him from life support and he passed peacefully. Given Hart put his heart and soul into Hart Square it stands to reason that his spirit will live on there.

“We haven’t been able to have a funeral for him so the festival will be sort of a healing time for many of us,” Rebecca Hart said.

Hart Square is open to the general public only once a year and always on the fourth Saturday of October.  Tickets go on sale on the first working day of the month so mark your calendar for next year.