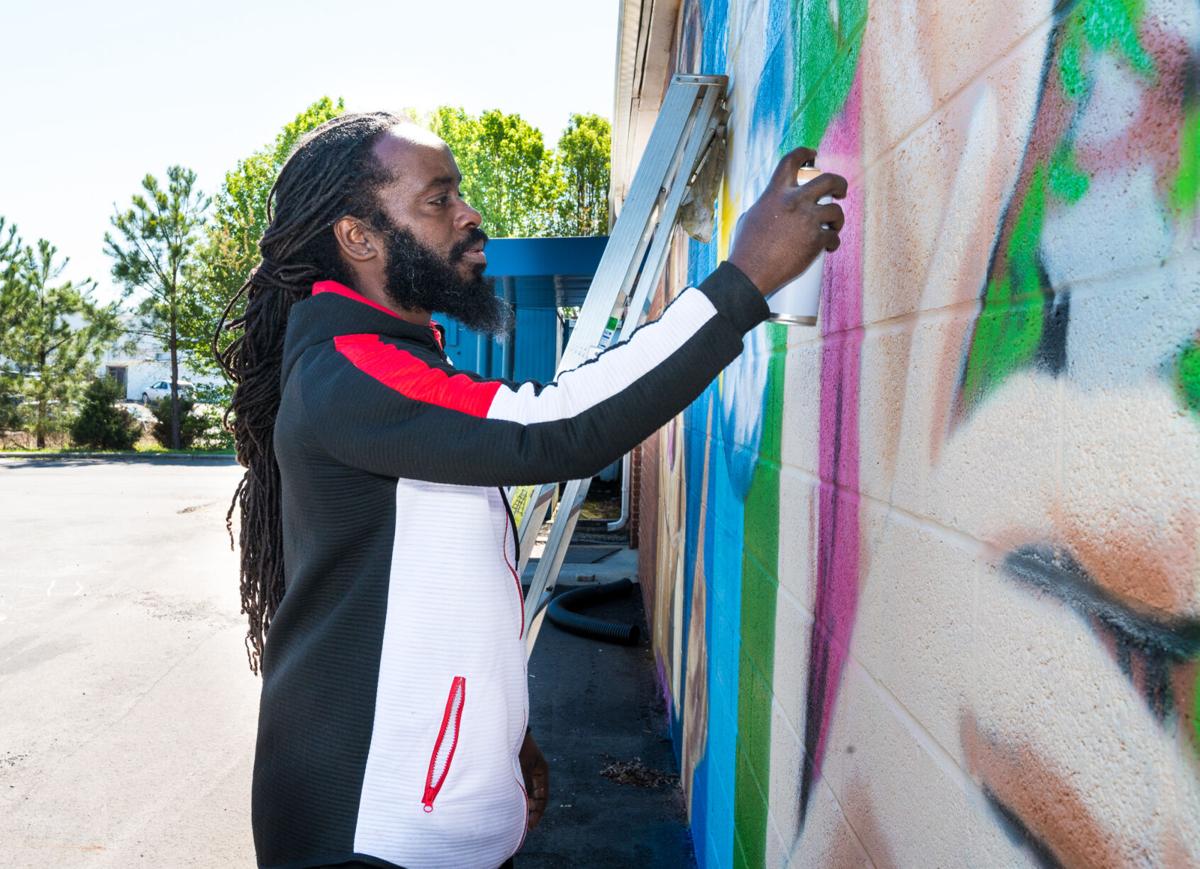 When Charles Key was growing up in Los Angeles, graffiti was the hip thing and going on right outside his window. He was greatly inspired by it but ended up working as a chef. He got his first break as an artist three years ago. He saved up a couple of paychecks and stepped out on faith. It’s been paying his bills ever since.

Key now travels all over the United States painting murals. A teacher at G.E. Massey saw a news piece about a “stop Asian hate” mural that Key had painted in Charlotte and reached out to him asking if he’d do one at G.E. Massey and he agreed.

“Painting with cans sometimes has the condonation of graffiti and that it’s not really art, so it was a blessing that they reached out to me,” he said. “With this mural, I wanted to inspire the children to use their imaginations and to be kind to one another. When you’re at this age, the world is your oyster – society hasn’t really given you your boundaries yet.”

There are several children depicted in the mural, one is a little boy playing with a model of an atom, in the center, there’s a boy and a girl looking into a jar with a magnifying glass and on the far left, a girl wearing a space helmet pointing to a picture of the world with the saying, “In a world where you can be anything, be kind” over it.

Before Key paints any mural, he sits with the surface and allows a vision to come to him. He also writes notes of blessing on the wall before painting on it.

The mural, which should be finished by the end of this week, is located on the back side of the school from the Hampton Inn side. Key’s also painting the fence that can be seen from East Main Street near Cook Out.

From Lincolnton, Key will be heading to Orlando to paint a mural then to Nashville.

“Even when I was little, I’d be doodling and drawing, but I never thought I could make money by doing art,” he said. “Schools kind of teach you that you’re mostly dead before your paintings are worth anything. With a family, rent, bills, I’ve always pushed my art to the back burner. Now, if I can spark the interest of one artist, I think I did my job.”

The students at G.E. Massey have been coming out and visiting with Key as he does his work which he’s be doing over the past two weeks.

“For the last six months or a year, we’ve been talking about putting some color to our building,” Principal Kelly Withrow said. “We talked to our art teacher and one of our pre-K teacher’s assistants and told them to go ahead and paint or do whatever. Then, another one of our Pre-K teachers, Mindy Buchanan saw Charles on the news and tracked him down.”

Pretty much all Withrow told Key that she wanted on the mural was that he show the diversity of the students at G.E. Massey and that it be colorful.

“The kids have absolutely loved it,” she said. “I had one teacher say that it just kind of makes you smile in the morning. He’s got a God-given talent for sure.”

The mural was paid through donations with a small amount from school funds. There are cameras on the back side of the building which Withrow hopes will prevent anyone from vandalizing the mural.