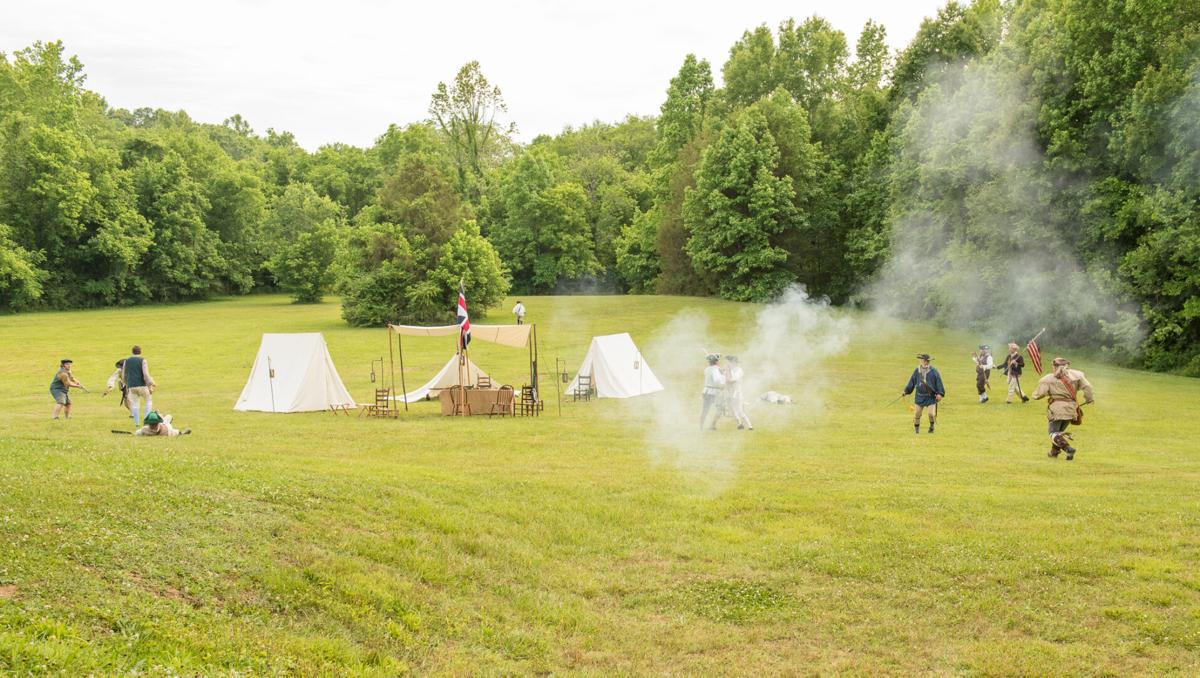 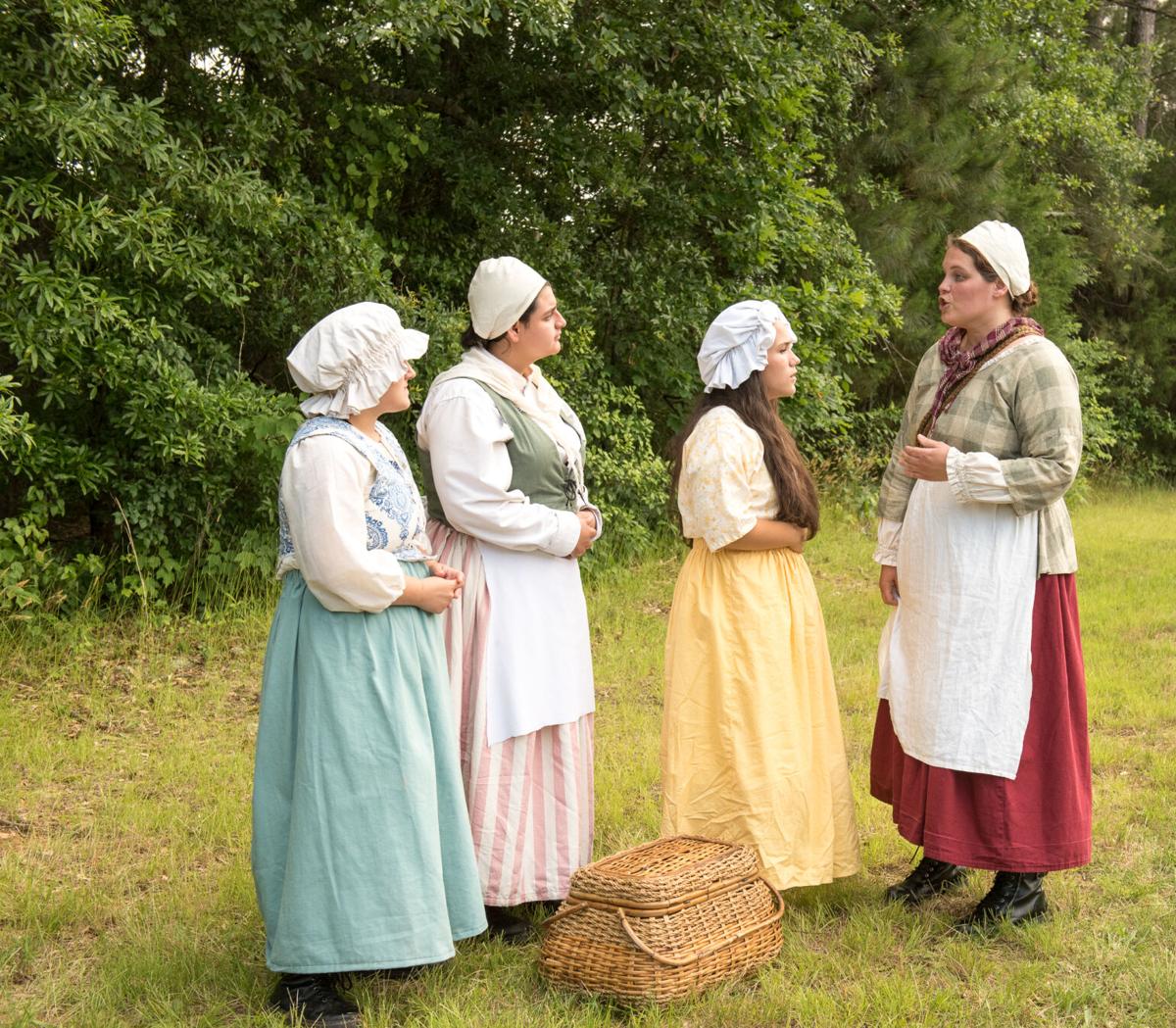 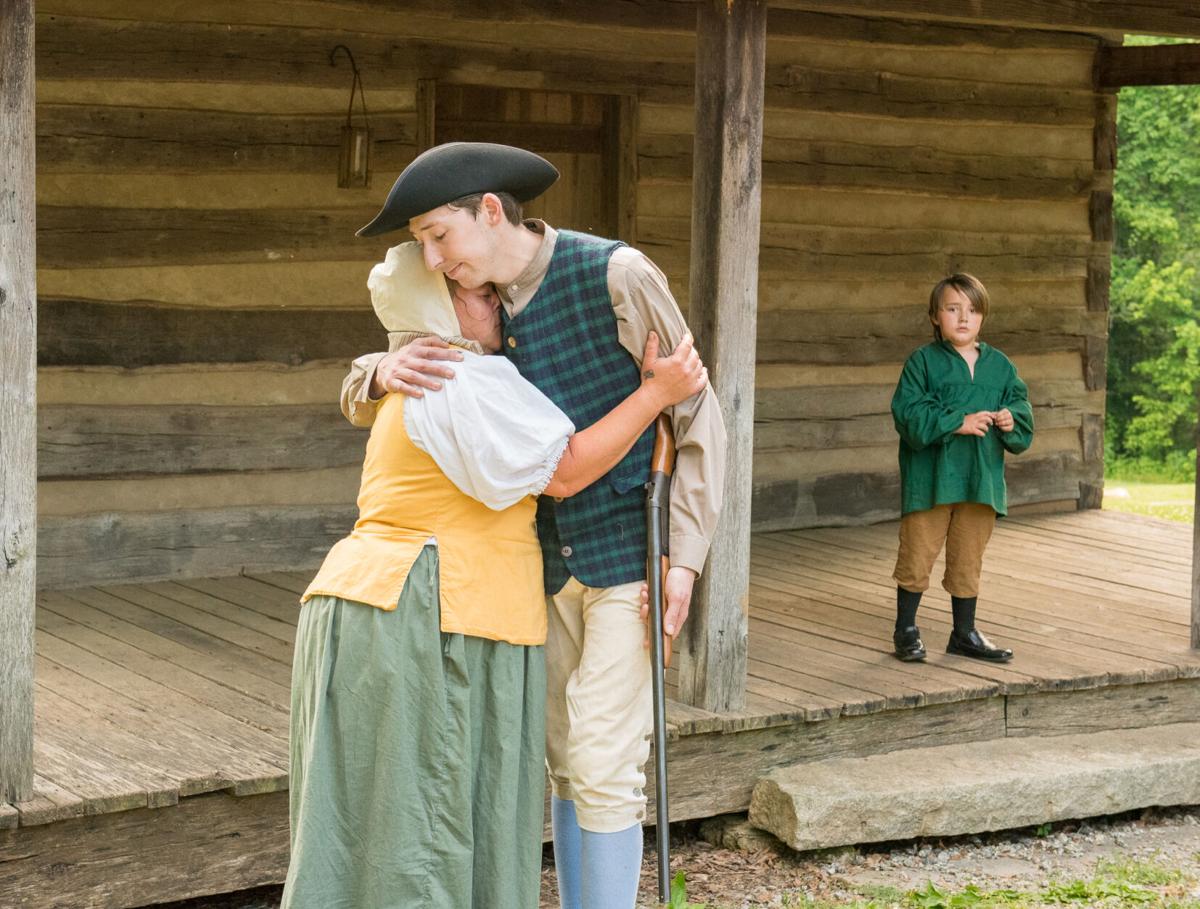 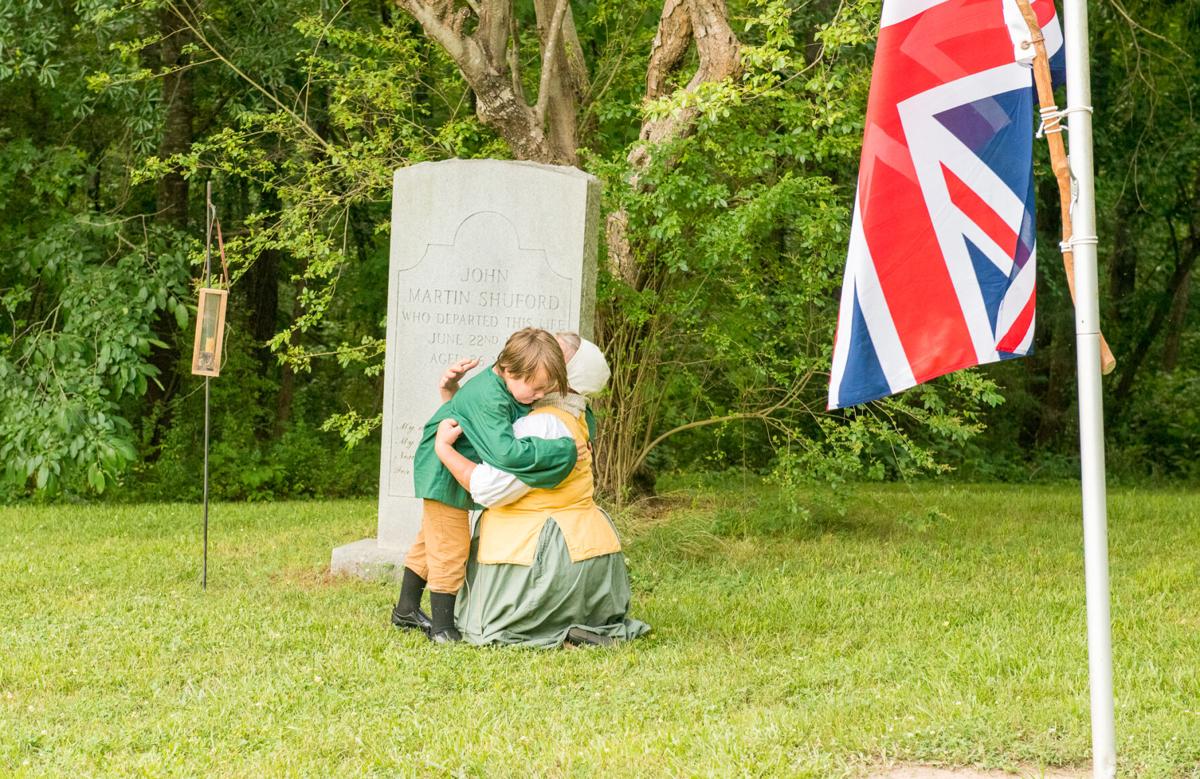 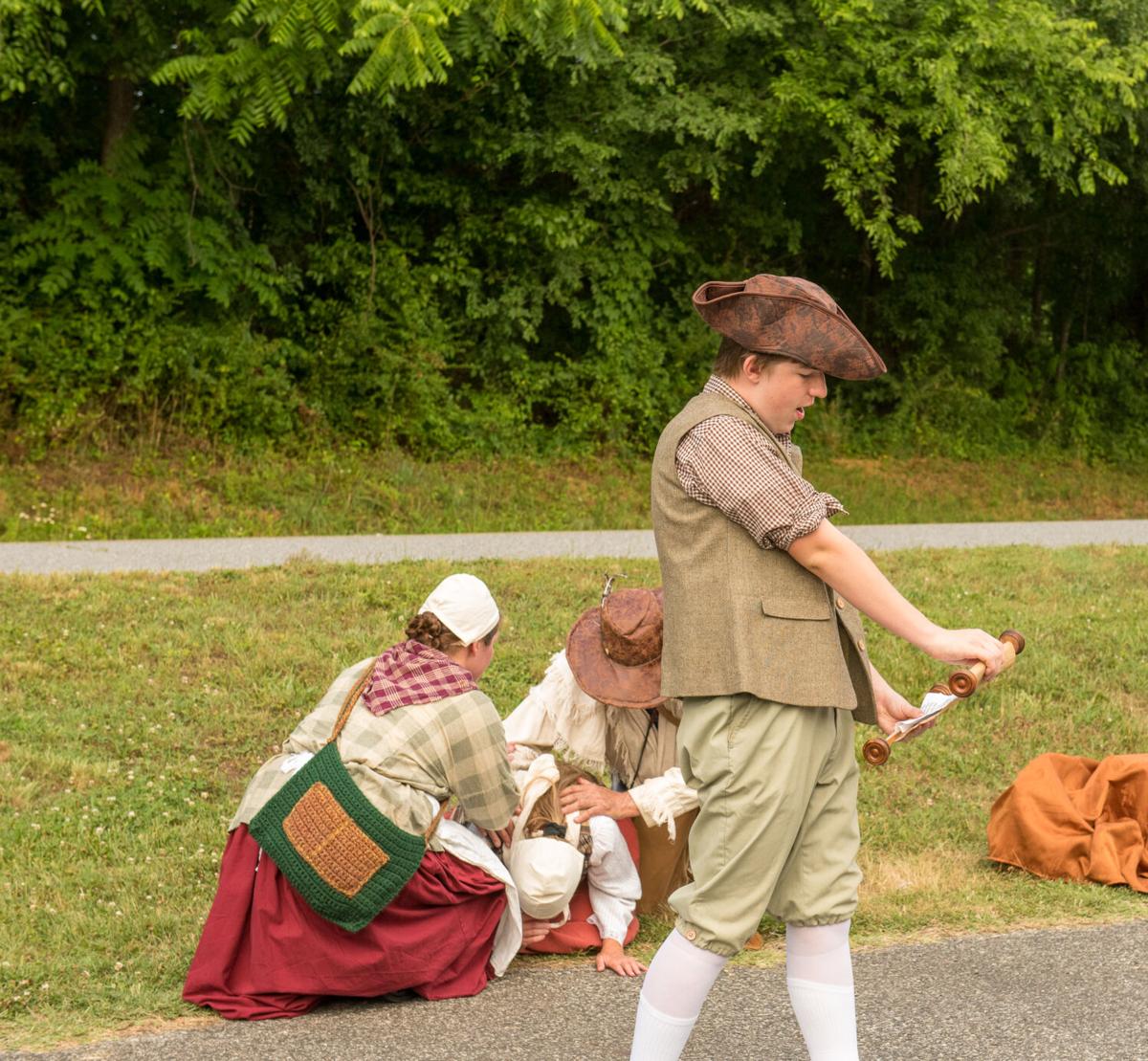 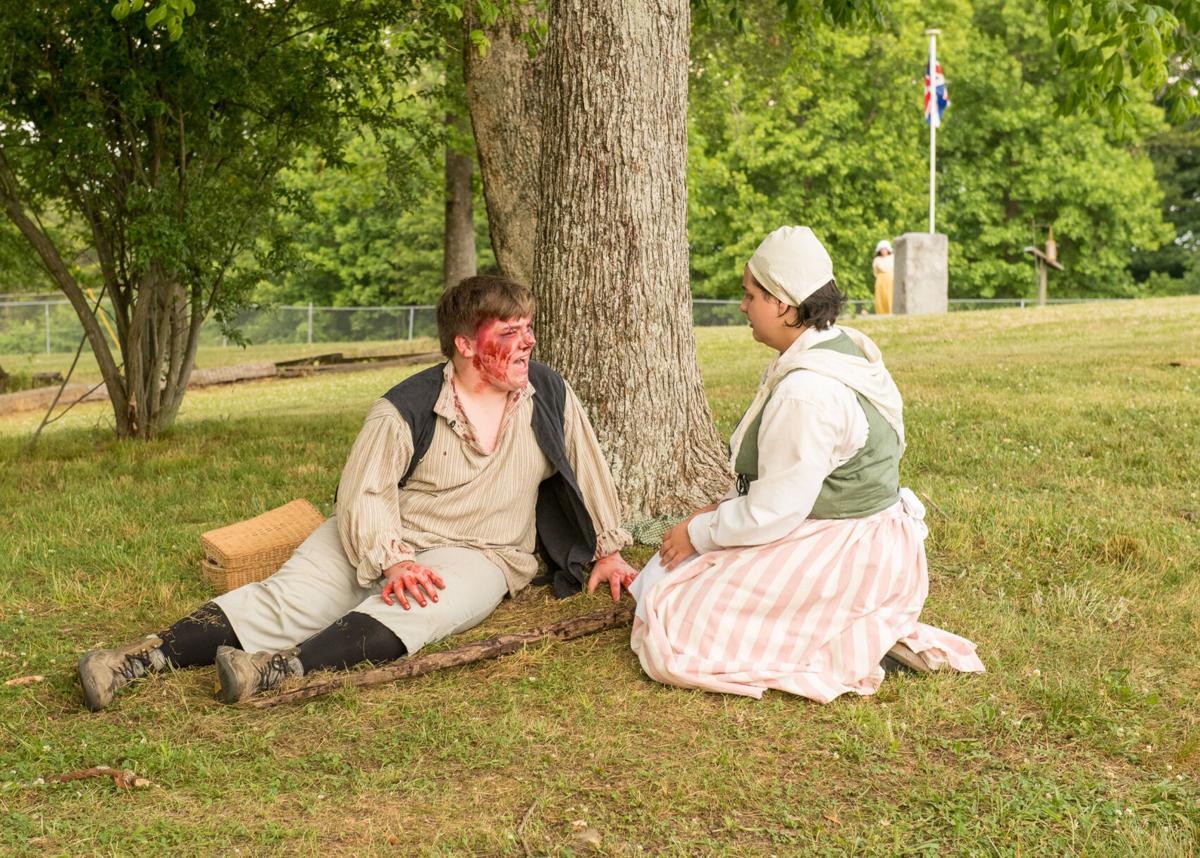 “Ghosts” made themselves visible to those on guided ghost tours to tell the story of the Battle of Ramsour’s Mill this weekend. The first tour on Saturday was led by Betsy Reinhardt, the wife of Christian Reinhardt.

Of course, they weren’t really ghosts, but thespians telling a story. The popular event is a precursor to the Thunder Over Carolina theatrical production which will open on June 17. Betsy Reinhardt was played by Amy Turner who’s been involved in Thunder Over Carolina productions for several years now. Throughout the tour, she stayed in character and told the story of the events that led to the battle and the aftermath.

“My husband and I own a lot of the land that we’ll be walking on,” she said. “I’m not entirely sure of what’s happening tonight, but I fear something unsettling is rolling in.”

Reinhardt led the tour from vignette to vignette which told the story of what led up to the Battle of Ramsour’s Mill.

“Stop, what do you hear,” she asked. “If you were here 241 years ago, on the 20th of June 1780, you would have heard entirely different sounds. You would have heard musket fire, men running, screaming, crying and hurting and dying. It was on that day that the ground on which we stand became a killing field during the Battle of Ramsour’s Mill. Many things led up to that battle and its repercussions were lasting.”

Turner artfully took the tour members back in time as she warned neighbors and friends of the potential for danger – telling them to stay inside and be safe.

That the Battle of Ramsour’s Mill didn’t involve any British soldiers makes it a particularly interesting study of the American Revolutionary period. While the resistance began in the northern states, when the British troops weren’t receiving the results they wanted in the north, they headed south which they believed was a Loyalist stronghold. While the British had victories in the lower southern states, when they started to infiltrate North Carolina in 1780, it became more difficult for them to recruit sufficient Loyalists.

Lt. Col. John Moore and Maj. Nicholas Welch, both members of the Ramsour’s Mill community returned home in early June after Charleston was taken by troops led by Gen. Lord Charles Cornwallis. Moore and Welch were tasked with rallying and protecting Loyalist support to aid in the British conquest of North Carolina, but not to engage in battle. Cornwallis stayed in South Carolina to let his troops rest. They didn’t follow orders.

Once the Patriots received the news that the Loyalists were gathering, Col. Francis Locke of Rowan County set out on June 19 with a troop of about 400 ill-equipped militiamen from Rowan, Mecklenburg, and Lincoln Counties for Ramsour's Mill. By that time, more than 1,000 Loyalists had assembled at the mill.

“At the time, there wasn’t supposed to be a fight,” Turner explained. “It was all a surprise. As their men left to join the battle, it left the women alone, so a lot of them gathered together with their children to pray. Other women made it a point to go around and warn everyone that this was happening. While the men in battles are usually looked on as the heroes, to me it was the women who were the unsung heroes.”

The Battle at Ramsour’s Mill was a neighbor against neighbor, and in some instances, brother against brother, skirmish.

“My family was a prime example,” Turner said. “My father and brother wanted to remain loyal to the crown, however, my husband, Christian thought that it was time to fight back and take a stand.”

Because most did not wear uniforms it was difficult to distinguish what side they fought on. Many were buried on the battle site in a mass grave. Because many of them came from adjoining counties, there was no one to identify them.

“Most of the men who fought that day were not soldiers,” Turner said. “They were townspeople and farmers, so many didn’t have weapons. A lot of the bodies were unidentifiable. That’s because if you’re using things that you can find around your house, for example, a lot of people used rocks as weapons, you can imagine faces being unrecognizable.”

The battle was a significant turn in American Revolutionary history in that it lowered the morale of Loyalists in the south, weakening their support of the British.

“Here we are, 241 years later and still telling these stories,” Turner said. “Many of the people who live right here and call this place home, have no idea what happened here all those years ago. We tell this story, time and time again so that the blood that was shed here and the men and women who lost their lives are never forgotten.”

Turner has since discovered that John Shuford, who fought and died at the Battle of Ramsour’s Mill, is her fifth great grandfather.

“In my family heritage book, it’s told that John’s wife, Eve, was the one who found him,” she said. “He died two days later. She went out with a baby on her back and enlisted the help of the Reinhardts. The only way that she was able to recognize him is that he had four toes on one foot.”

Shuford’s grave is memorialized near the battle site.

The production of Thunder Over Carolina will be held on June 17 and 18 at the Woodmill Winery Amphitheater in Vale. Tickets are available through Eventbrite.