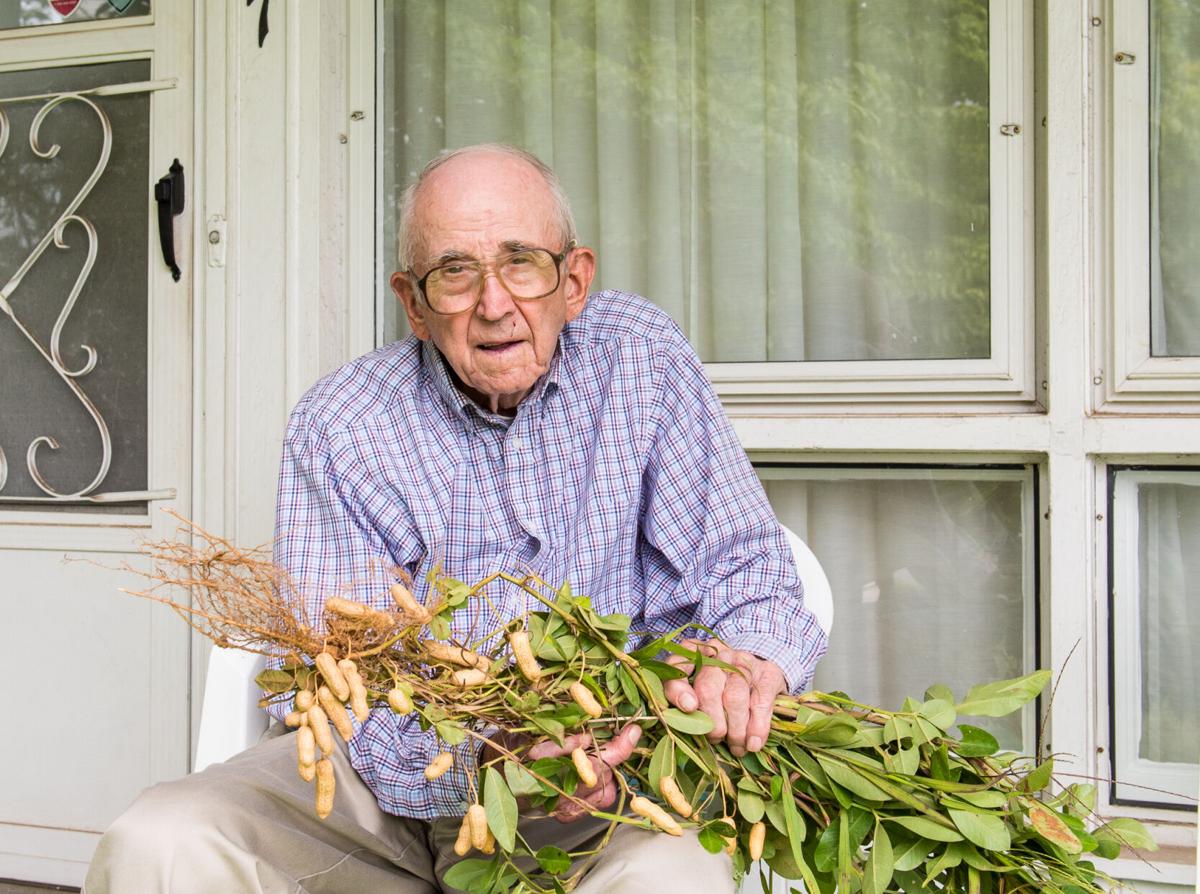 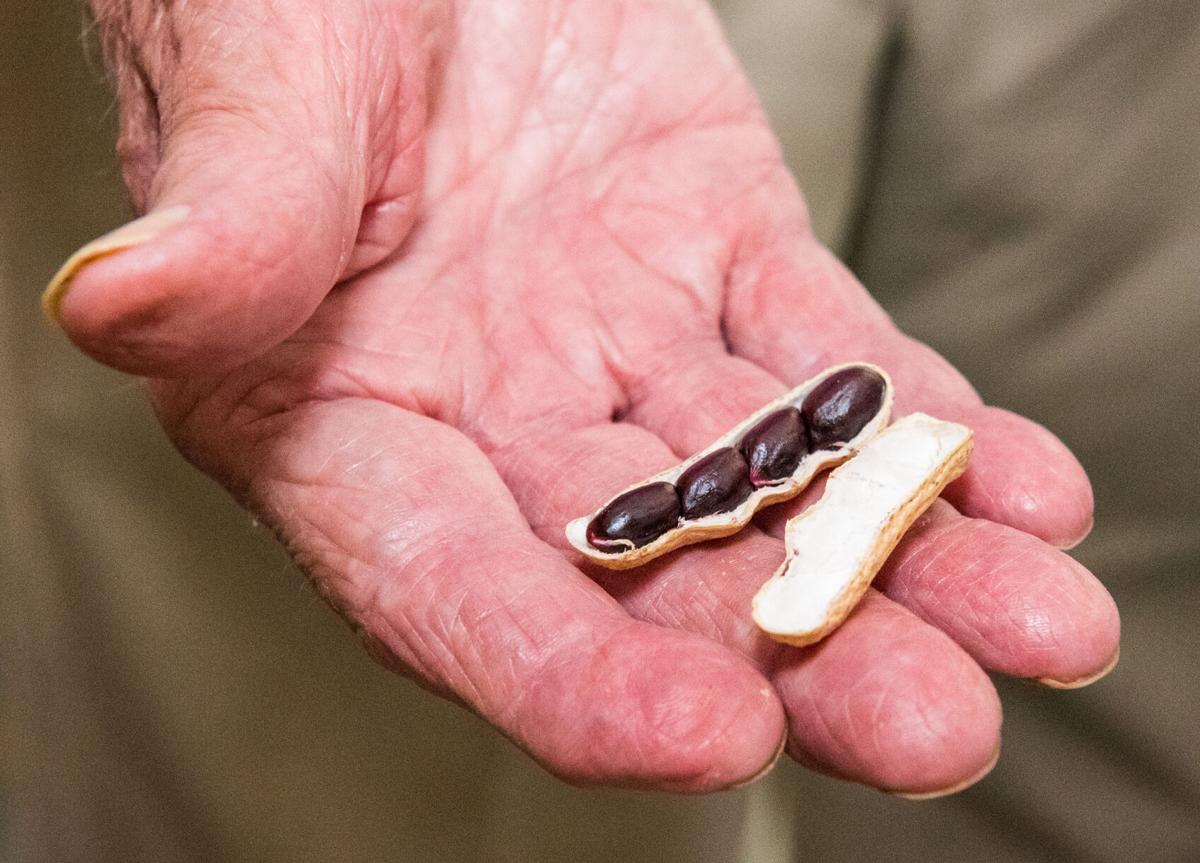 It all started with the gift of a few black peanuts. Gordon Schronce’s late wife, Dot, visited an elderly couple living out on Old Plank Road in Iron Station and brought home three peanuts.

“They lived in an old two-story frame house down below that school that was abandoned,” he said. “He never told her what was inside them or anything. I cracked them open and they had black peanuts in them.”

Instead of eating those seven peanuts, Schronce put them in his freezer.

Yes, there is such a thing as black peanuts, but they’re unlikely to be found in a grocery store or even in most seed catalogs. According to food historian William Woys Weaver, the black peanut may have been used as a substitute for Black Bambarra (African ground nut) by the black community. Black Bambarra is important in African folk medicine as an aphrodisiac. The North Carolina climate won’t support black Bambarra, but black peanuts grow there without difficulty.

Over the years, Schronce saved the blackest peanuts coming from shells that contained four peanuts each, planted them again the following year and kept saving the prime seeds. Schronce’s son, Arty ordered some black peanuts advertised in the Southern Exposure Seed catalog, but they weren’t as big or as black as those Schronce was growing.

“My brother-in-law told me many years ago that an old farmer told him that if you planted bigger peanuts, you’d get bigger peanuts,” he said. “I told him he was crazy, a peanut’s a peanut. Then one day it was like you slapped me up aside the head – why don’t you try. I found out it worked.”

This is how seed selection works. Only the best specimens of seeds are kept and replanted each year. The coronavirus pandemic brought with it a resurgence of an interest in gardening akin to the victory gardens during World War II. There was one thing missing from this renewed interest in food sovereignty – saving seeds so they can be used and shared in the coming years.

The black peanuts that Schronce received are considered an heirloom variety, similar to the Cherokee Purple tomato and the Candy Roaster squash. The variety was preserved by family gardeners over the years, the seeds were saved, and some were passed on to others. It’s a way to preserve culture. The good thing about saving seeds is that it’s cheap and easy.

Another reason to consider seed saving is to make sure that a particular variety remains available. Gardening became so popular this year that many seed catalogs are sold out of the more popular varieties of vegetables and herbs. It doesn’t take a pandemic for this to happen either, seed crop failures are not uncommon.

The heritage varieties of vegetables in general don’t do well in industrial agricultural production. They may be more difficult to grow and/or harvest and most importantly, they don’t keep or transport as well, but the taste of these varieties is far superior to any industrial-grown variety.

The stories behind these varieties of vegetables is fascinating. Take the Cherokee Purple tomato for example, it’s a variety that was rediscovered by tomato grower Craig LeHoullier, according to the Slow Food Ark of Taste with which it’s listed. LeHoullier claimed that it was more than 100 years old and originated with the Cherokee people.

This is the last year that Schronce, who’s 87 years old, will be planting his black peanuts. There was a time he’d grow acres of peanuts, but it’s become too difficult for him to care for them throughout the summer. For this year’s harvest, Schronce’s children came home to help.

Peanuts grow slow, usually planted a month after the last frost and won’t be ready for harvest until late summer, early fall. They need to be kept weeded and watered as they grow. Harvesting them is a slow and tedious process. The Southern Exposure Seed Exchange recommends harvest during a dry spell in October or right after a light frost. After three consecutive nights of low temperatures (40°F or colder), plants will not mature pods any further, so harvest can happen anytime. If weather and critters allow, dig vines and let them sun-dry for several days before pulling pods off. Cure indoors in a rodent-proof space for two-three weeks before storing.

Over the years, Schronce’s Deep Black peanut has been distributed to several seed catalogs and has been shared all over the world.

Schronce used to carry cans of his peanuts around with him in his pocket and would give them away.

The Schronce’s Deep Black Peanut is not the only type of seed that he’s contributed to. There’s also the Roseland Small White Pickling cucumber. Seeds came into Schronce’s possession in a similar manner. His sister, Evelyn Allran, received seed from a neighbor in the Roseland community near Lincolnton and brought some to Schronce. He’s preserved and saved them ever since. They’re carried by Southern Exposure Seed Exchange as well.

“Everyone I’ve ever given them to come back for more saying they’re the best cucumbers they ever put in their mouth,” Schronce said.

In addition to Southern Exposure Seed Exchange, Sow True Seed based out of Asheville and Baker Creek Heirloom Seeds in California maintain large catalogs of heirloom and hard to find varieties of seeds.