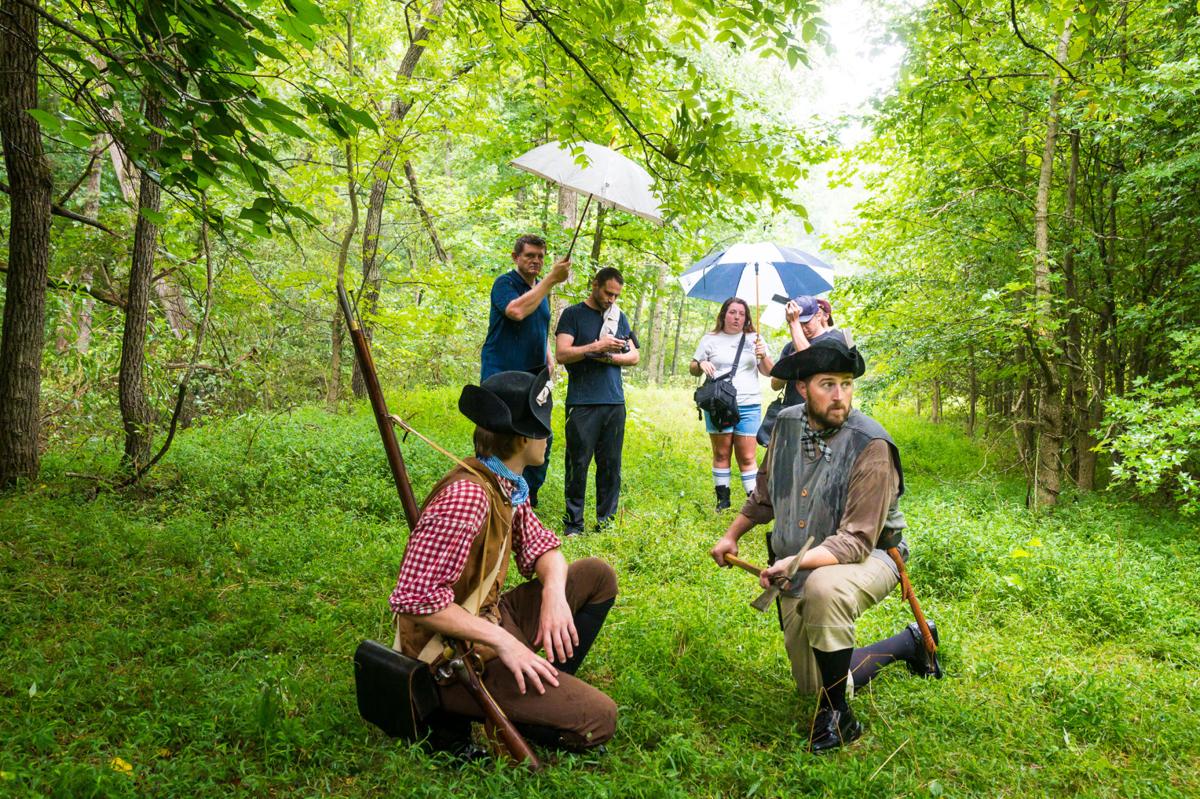 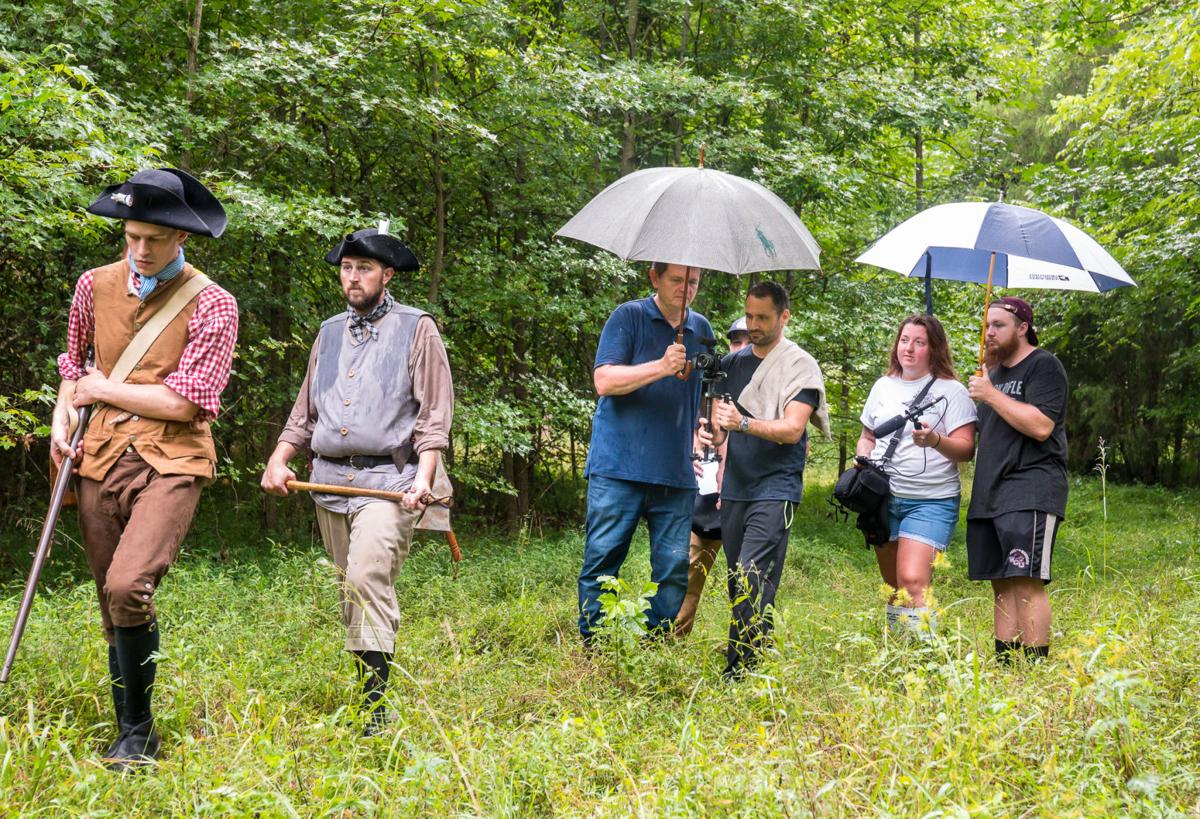 It may well have happened, some 239 years ago. Two young men walk together through the North Carolina backcountry on their way to join the patriot militia forces gathering in present day Lincolnton. On Saturday, however, the two young men, Chris Stone and Ryan Gurganious, dressed in costumes similar to what men may have worn during Revolutionary times, were accompanied by a film crew.

Helms Productions, owned by Michael Helms, a local filmmaker, and Thunder Over Carolina, Inc. have joined together to create a short film, “White Paper,” based loosely on the story of the Battle at Ramsour’s Mill. The title of the film came from the use of small piece of white paper (or cloth) the patriot militiamen put in their hats to designate them as patriots. Except for loyalists Lt. Col. Moore and Major Welch, the North Carolinians on both sides of the fight didn’t have uniforms. The loyalists used a green twig as proof of their allegiance.

“When I was writing the script for it, the main thing was to capture the tragedy of this whole resident war going on in Lincoln County and the irony that the patriots used the piece of white paper to differentiate themselves from the enemy,” Helms said. “It actually turned out to be detrimental as it provided the enemy with easy targets. It’s ironic and tragic at the same time.”

After the battle, it was discovered that many of the deceased patriots had bullets shot through the “bull’s eye” of the white symbol in their hats.

The Battle of Ramsour’s Mill will celebrate its 240th anniversary on June 20, 2020. The play “Thunder Over Carolina” will return with a slightly rewritten script. Both Stone and Gurganious are slated to take part in the 2020 production, which will be shown at the James W. Warren Citizens Center.

The“White Paper,” is intended to be no longer than 10 minutes and will be utilized both as promotion for “Thunder Over Carolina,” Battle Week and entered into film festivals by Helms, who lives in Lincolnton.

“It’s definitely different from theater,” Gurganious said. “The difference is the intimacy of the camera vs. being on stage. This is in-depth, right on the face of the person and you’re seeing the emotion in the eyes, the face. These are emotions that you wouldn’t necessarily pick up on stage. It’s a different experience, one I’m really excited about. I think this is going to be great for ‘Thunder.’”

Unlike theater, there’s more than one take associated with filming. In theater, if an actor makes a mistake, the show goes on. With film, a scene can be done over and over again until it’s right. Then there’s the editing that’ll be done by Helms.  When he’s editing, he has a tremendous amount of creative license to make each snippet of the film look and feel the way he envisioned it when he was writing the script.

“Thunder” wasn’t produced last year due to working being done on the Citizens Center. Helms helped out during the ghost walk held during Battle Week and he’s been interested in doing video promotions for the project for some time now.

“Being a filmmaker, I thought it would be good to kill two birds with one stone and I could get a short film out of it and we could use portions of it for promotional material,” he said. “I wanted to be able to lend my services to ‘Thunder Over Carolina.’ Ultimately, I don’t think it’s for me, it’s for ‘Thunder’ but I get the benefit of having made another film.”

The film is basically about a man who leaves his wife behind to go to battle and takes a friend along with him. Along the way, they get ambushed by loyalists.

There are a lot of moving parts in making a short film like this, Helms said. It’s taken several months of planning before he even got to the filming, which is being shot in both Lincolnton and in Cherryville.

“Let’s just say we have someone receiving a gunshot wound,” he said. “A lot of planning goes into that for timing and everything we need to make that happen. That goes for every scene and dialog.”

After all the filming is done, it’ll take Helms another two to three months of editing before the film is completed.

Like so many people living in the area, Helms has become fascinated by the history of the battle and that it was a resident war rather than two traditional armies clashing.

“I knew they were doing the play a couple of years ago and I wanted to get involved but I just didn’t have the time,” he said. “The opportunity opened up five or six months ago and I jumped on board to become a part of the Thunder Over Carolina committee. This film will hopefully give people something they can watch on screen and will build hype for the show.”