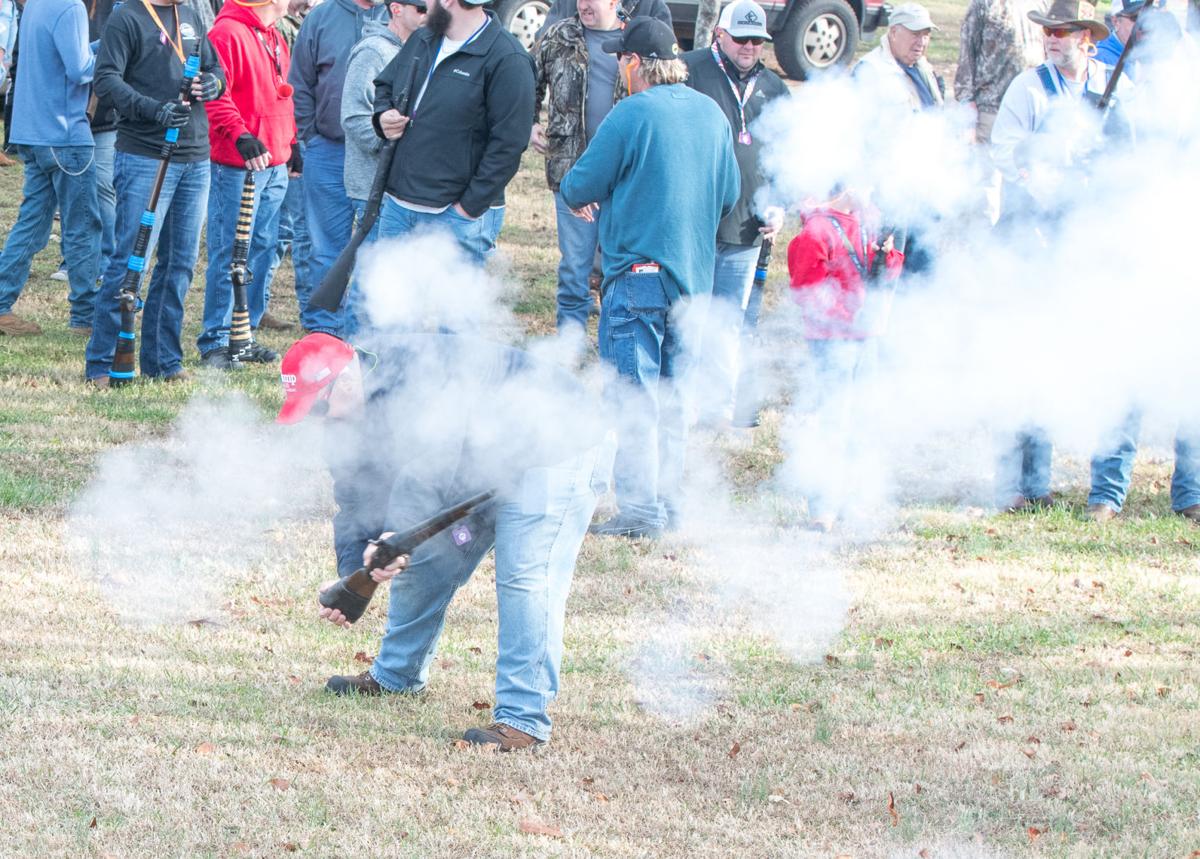 Josh Mellon fires a shot during the Lincoln County run of the Cherryville Traditional New Year Shooters on Saturday at the Boger City Fire Department. 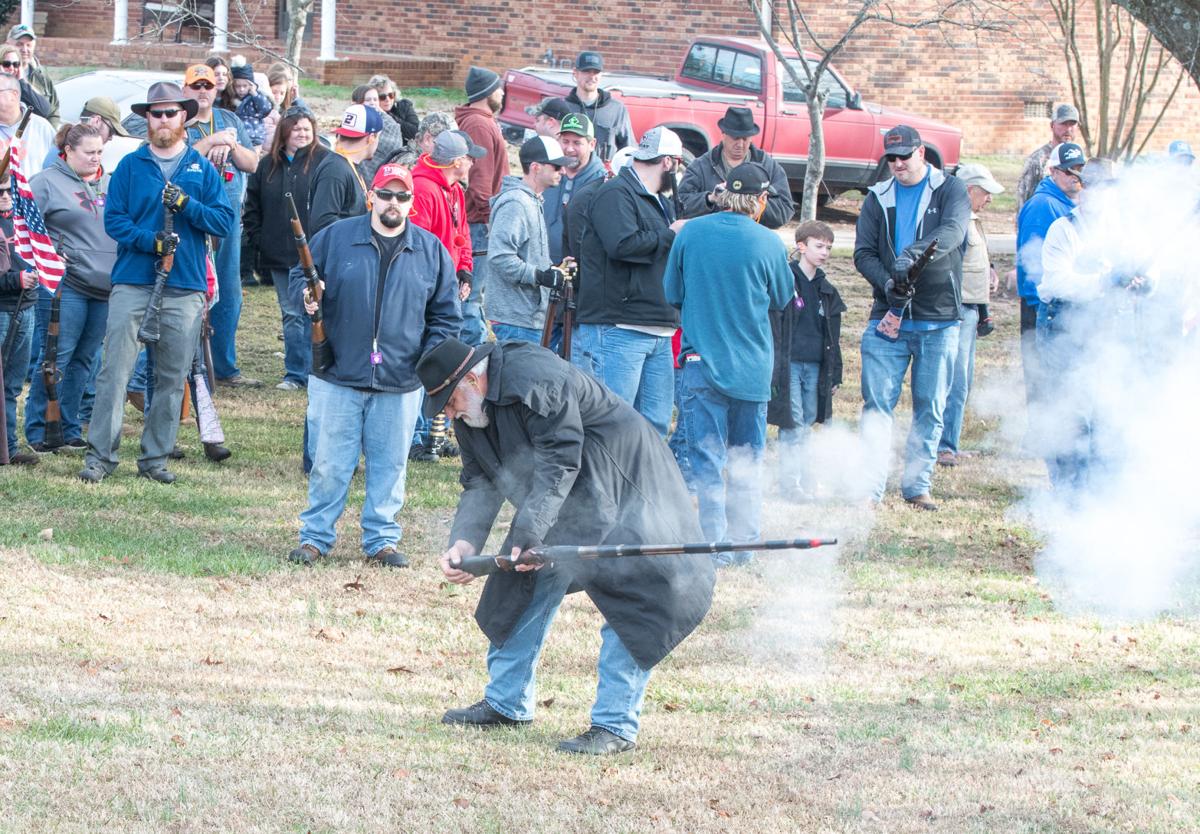 Josh Mellon’s father, Eddie fires his gun at a shot on Highway 150 in Lincolnton on Saturday while Josh waits in line. 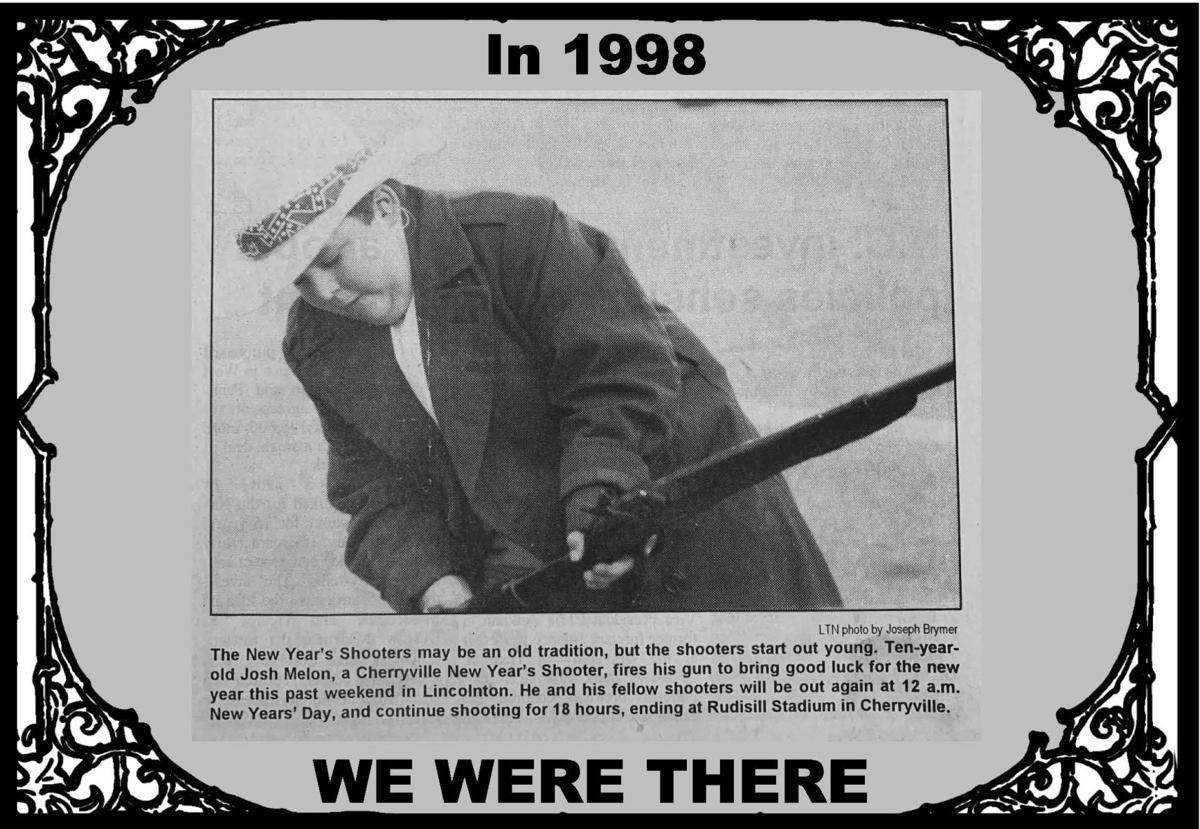 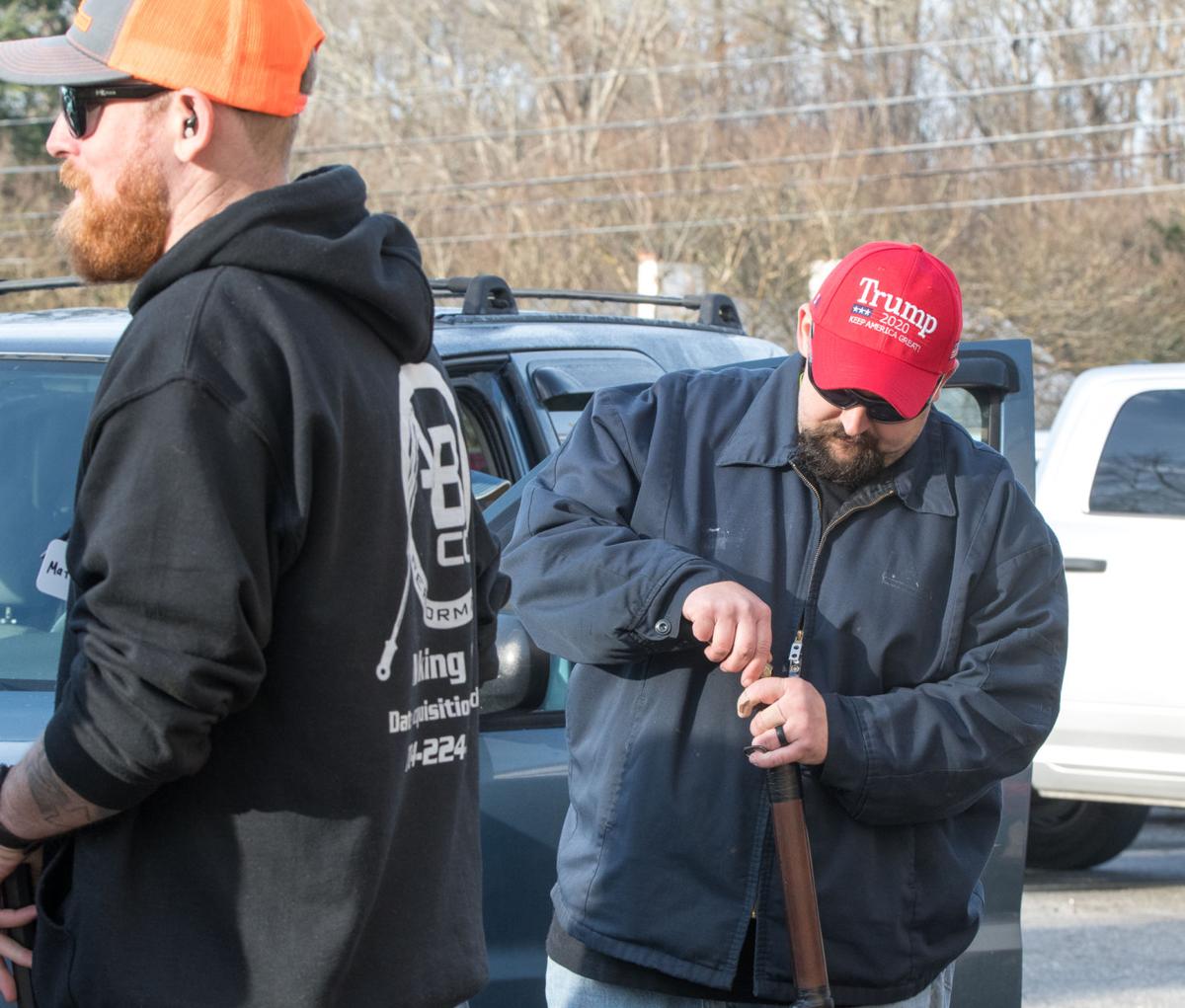 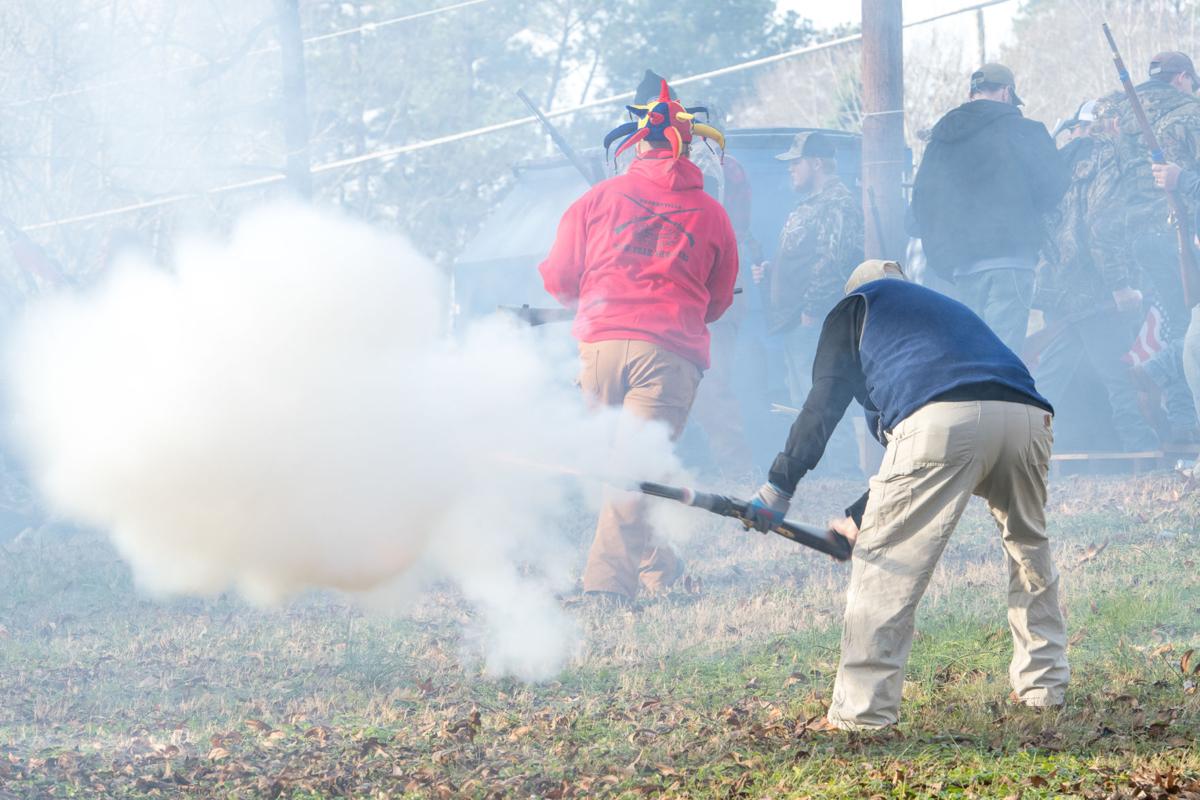 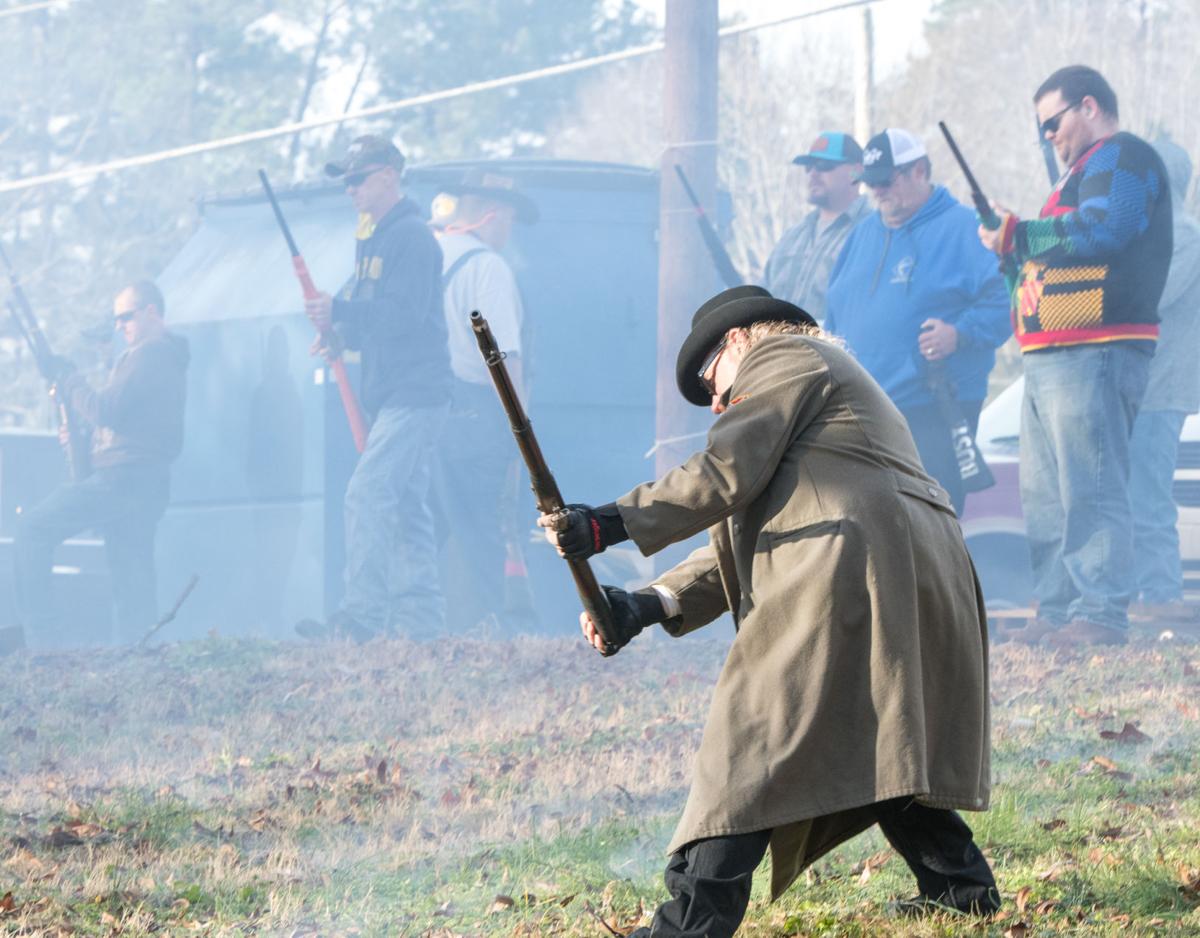 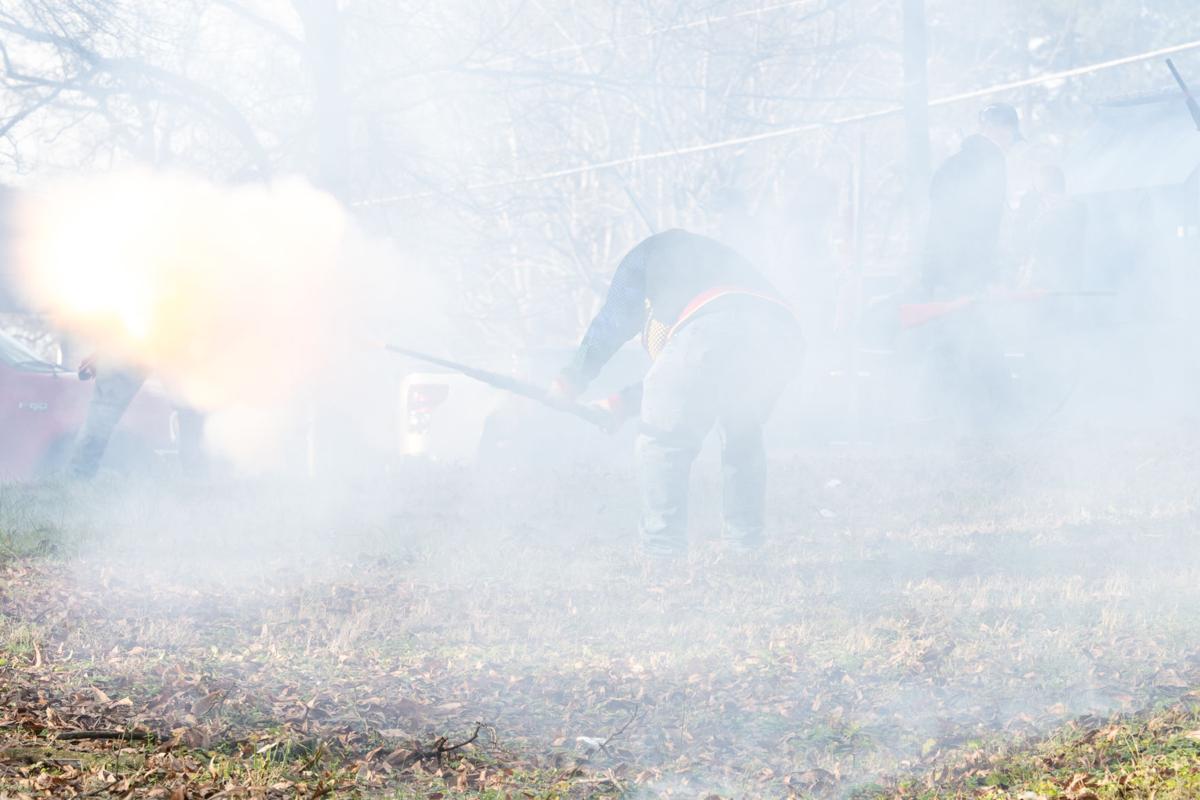 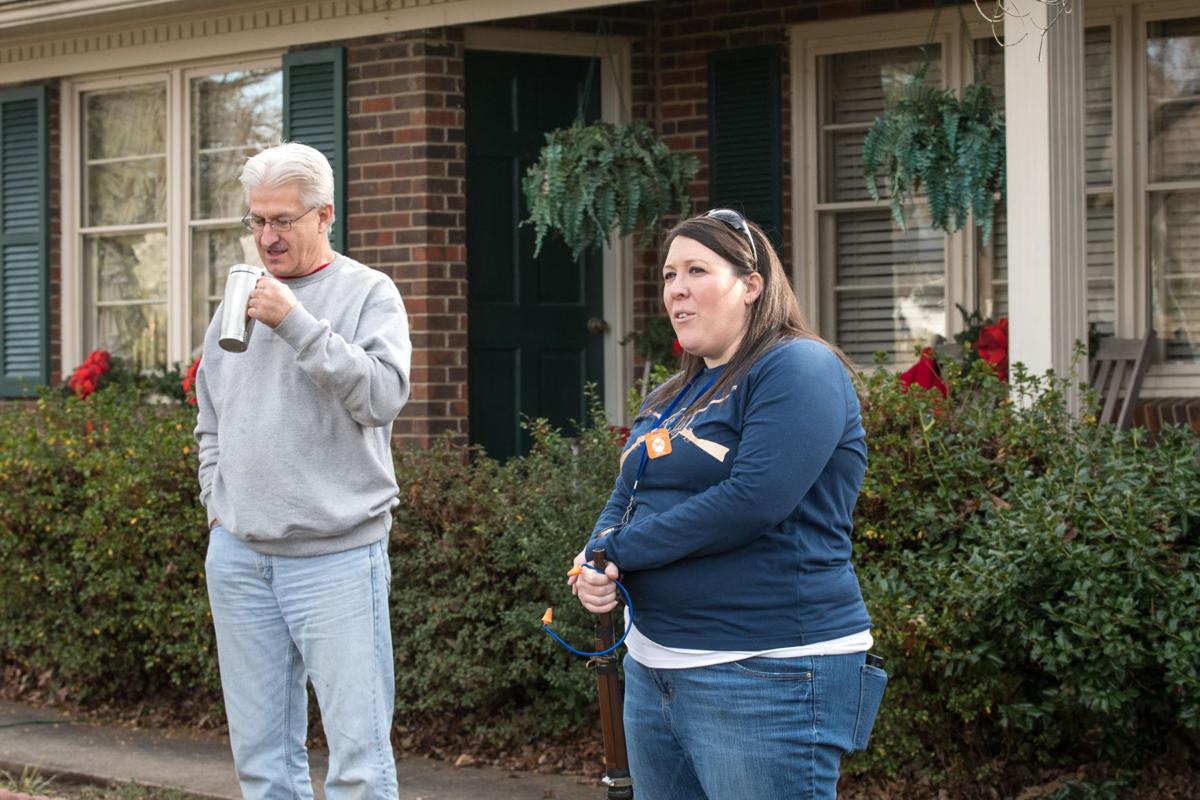 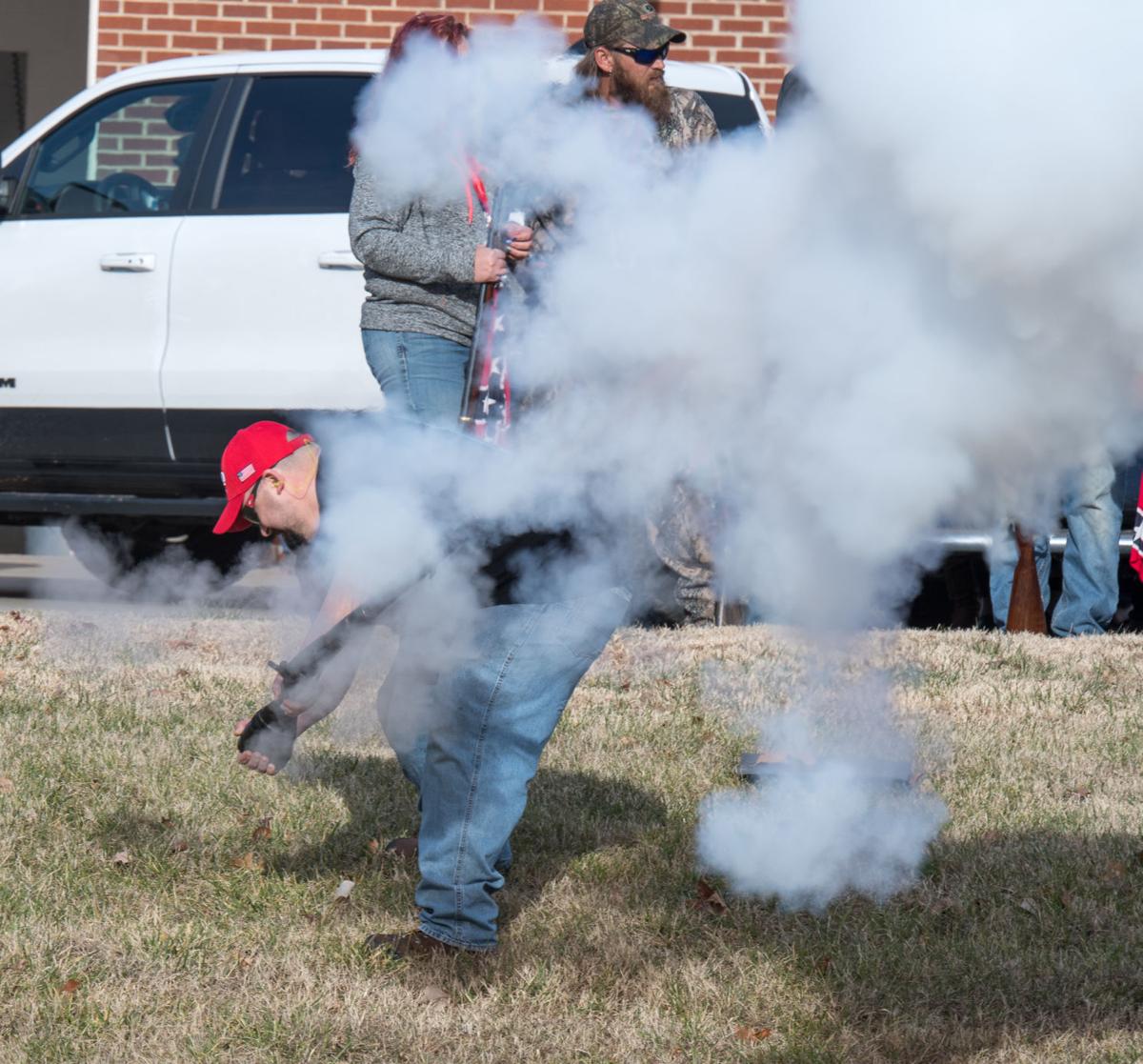 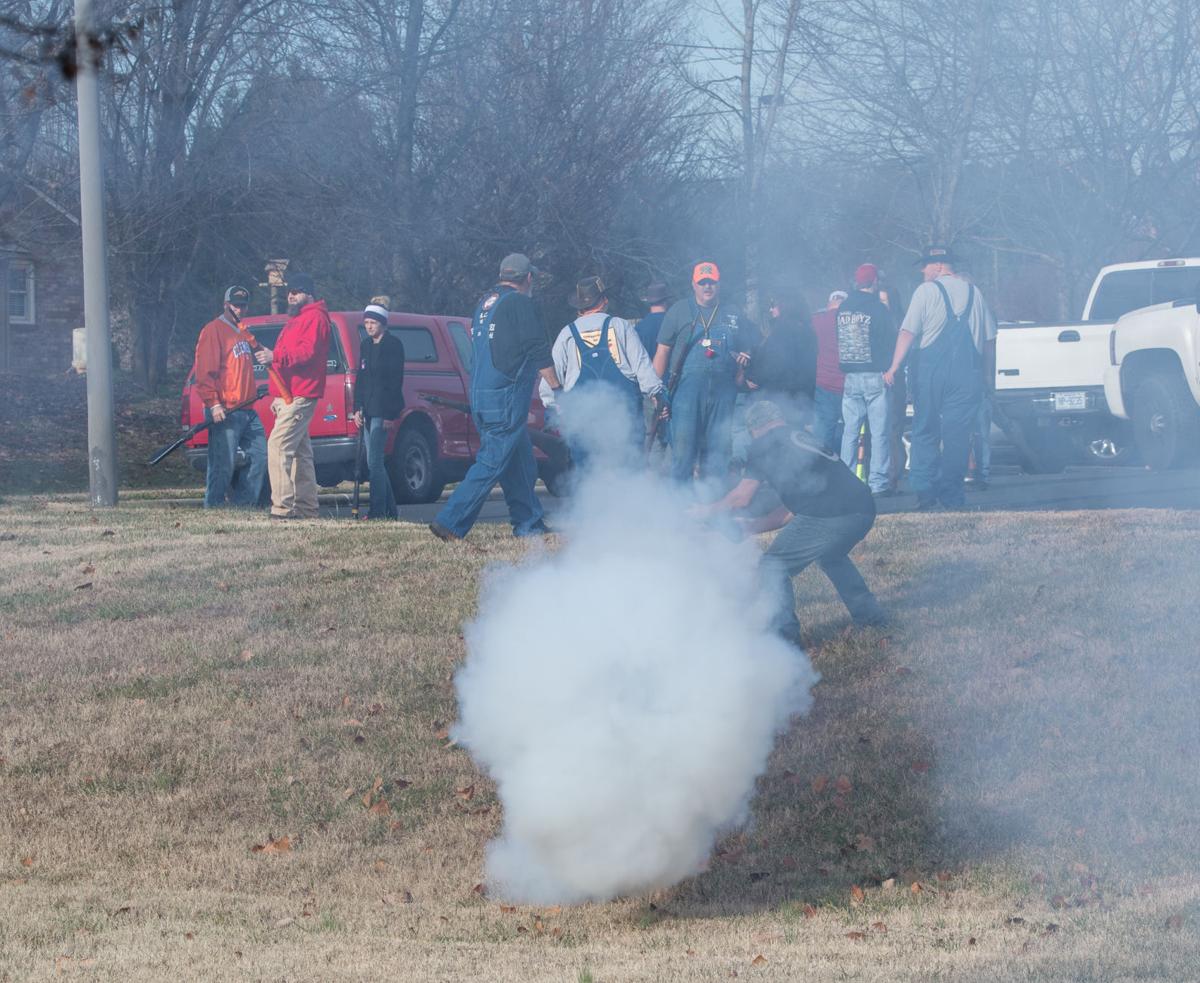 Josh Mellon fires a shot during the Lincoln County run of the Cherryville Traditional New Year Shooters on Saturday at the Boger City Fire Department.

Josh Mellon’s father, Eddie fires his gun at a shot on Highway 150 in Lincolnton on Saturday while Josh waits in line.

Good luck is being conveyed throughout Lincoln and Gaston Counties as the New Year Shooters bring in a new decade. As they have for many years, the Cherryville Traditional New Years Shooters did a Lincoln County run on Saturday. This is done because there’s so many people on the list now that they need to break it up.

The shooters will do their regular run, mostly through Gaston County but also traveling into the western part of Lincoln County beginning at 12:00 a.m. on New Year’s Day. Due to a rift that happened years ago, there are two groups of shooters, the “Traditional” group and the Cherryville New Year’s Shooters Inc. Despite having different names, they’re still adhering to a tradition that can be traced back to early immigrants. The ritual is also quite similar to that of the “Philadelphia Mummers.”

Using black powder muskets or pistols, some reproductions and others antique and handed down through the generations, the shooters, often spanning two or three generations, men, women and children, pack these guns with black powder and fire them. It’s really one big rolling party. People who haven’t seen each other since the year before greet and wish each other a Happy New Year.  There’s a set list of locations that they visit and some of these locations have been called on for decades. Upon arriving at a location, the shooter’s chant will be sung by a designated individual, which ends, “And for good luck we’ll fire our guns.” One by one, or in groups of two or three, the shooters will fire their guns.

The thunder from these guns, which are perhaps sometimes overloaded with black powder for maximum noise and smoke, can be heard for miles. The firing of the guns is thought to have several purposes – driving out demons, witches, and other non-desirables from the property and blessing the land for the upcoming year.

In a dissertation submitted by August Melton Black for his Ph.D. from Walden University, he writes that the shooting “is also symbolic of the burst of new life from the seeds that the farmer will plant in the field and the fertilization of the seed of the mothers.” No matter the purpose of the shooting, it’s a tradition that’s been upheld in this area since the time of the early settlers.

Josh Mellon, who is pictured on page eight during a shoot in 1998, was eight years old when he first started shooting. His father, Eddie, started him out.

Like the Philadelphia Mummers, the Cherryville Shooters travel from location to location in a caravan of trucks, SUVs, vans and buses. They pull in, load their guns and wait their turn to shoot. Almost as quickly as they get there, they’re back in their vehicles heading off. Sometimes property owners have food or drink for them, others give them a token of their appreciation for the service.

To the shooters, it’s a combination of a service, a performance and a fun outing. Many of the shooters dress up in outlandish, New Year’s Eve-type garb, and like the Mummers, it’s what they and their families do for New Year’s Eve and something that they’ll rarely miss, no matter the weather.

Long-time member of the traditional group, Pete Neill had to miss the Lincoln County run on Saturday due to a recent hospitalization. He’s been shooting for 48 years and has rarely missed a shoot.

“I don’t load the gun as heavily as I used to,” he said. “There’s memories every year that are made.”

To Neill, it’s almost a religious experience. He said that if people were to listen to the chant, they’d realize that it speaks about God. The chant is usually passed down to individuals within the group through oral history and most know the chant without the need for notes.

“Chant of the New Year’s Shooters

Good morning to you, sir. We wish you a happy New Year,

So long as you stay here below. May he bestow the house you're in,

Where you go out and you go in. Time by moments steals away,

First the hour and then the day. Small the lost days may appear,

But they soon mount up to a year. Thus another year is gone,

And now it is no more of our own, but if it brings our promises good

As the year before the flood, but let none of us forget

It has left us much in debt, a favor from the Lord received

Since which our spirits hath been grieved. Marked by the unerring hand,

Thus in His book our record stands. Who can tell the vast amounts

placed to each our accounts? But while you owe the debt is large,

You may plead a full discharge. But poor and selfish sinners say,

What can you to justice pay? Trembling last for life is past

And into prison you may be cast. Happy is the believing soul,

Christ for you has paid the whole. We have this New Year's morning

Called you by your name, and disturbed you from your rest,

But we hope no harm by the same. As we ask, come tell us your desire,

And if it be your desire, our guns and pistols they shall fire.

Since we hear of no defiance, you shall hear the art of science.

When we pull trigger and powder burns, you shall hear the roaring of our guns;

Oh, daughters of righteousness, we will rise and warm our eyes

And bless our hearts, for the old year's gone and the New Year's come

And for good luck, we'll fire our guns!”

“Then you greet these people and the majority of them that you meet during a shoot are religious people and it’s such a joy,” Neill said. “We see these people once a year. If a person that we shoot for dies, we’ll shoot for their spouse. If they decline us to come, we go to their next generation. We try to keep it in the family. I’ve actually shot for four generations of the Carpenter family. That’s pretty neat.”

There are always people on the waiting list so if a location no longer wants the shooters to come, the space can be filled.

When Neill was young, he wanted to go on a shoot, but his father wouldn’t let him.

“The last several days of the year, we were out of school and helping Randy with a race car,” Neill said. “Randy asked us if we’d like to go New Year’s shooting with him. We said, ‘sure.’ He said he had plenty of guns and for helping him, he’d pay for the powder and to ask their parents if they could go with him.”

Both boys knew that their parents likely wouldn’t let them go, so Neill stayed overnight with Joel, who lived close to where the shoot started. They slipped out of a second-floor window, climbed down a tree and were up all night on their first shoot.

Eventually his parents found out and they gave Neill permission to go with his uncle on shoots, but that he had to pay for it himself. He’s been shooting ever since.

“As a kid you think you’re going to have fun and party all night and into the next day,” Neill said. “Actually, it’s wishing the people of the home a happy and prosperous New Year through God.”

The Traditional Cherryville Shooters will be at the second annual Apple Drop in downtown Lincolnton on New Year’s Eve. The event is family friendly and totally free, but the city asks people to bring canned food, people or pet, to help replenish the pantries of Christian Ministry of Lincoln County and Lincoln County Animal Services. There will be food trucks, lots of party hats and swag, games, face painting, photo booths, music and dancing. The shooters will perform at 6:30 p.m. and the apple drops at 7 p.m.