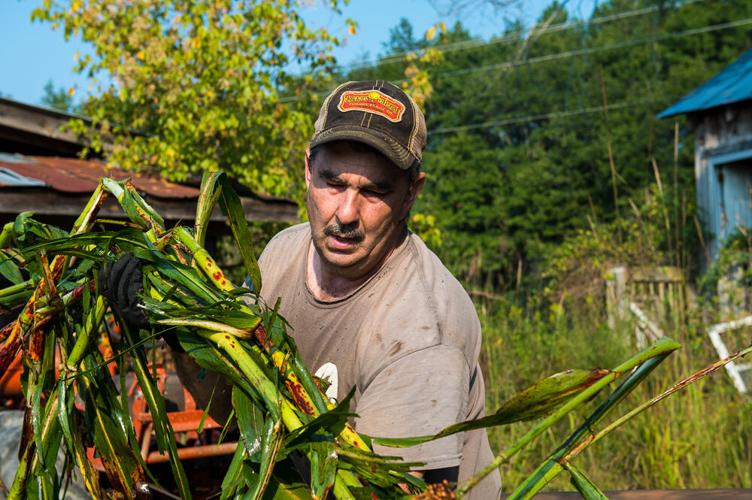 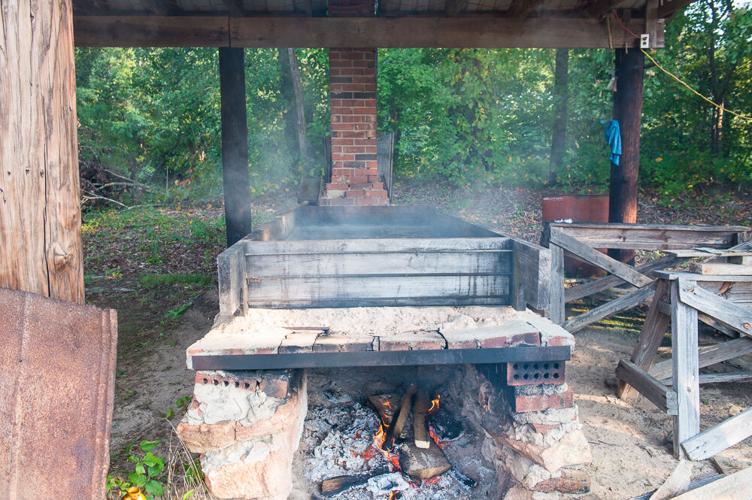 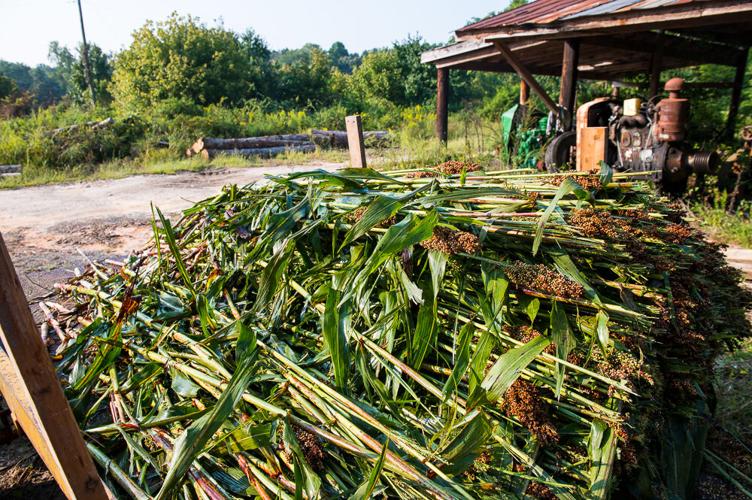 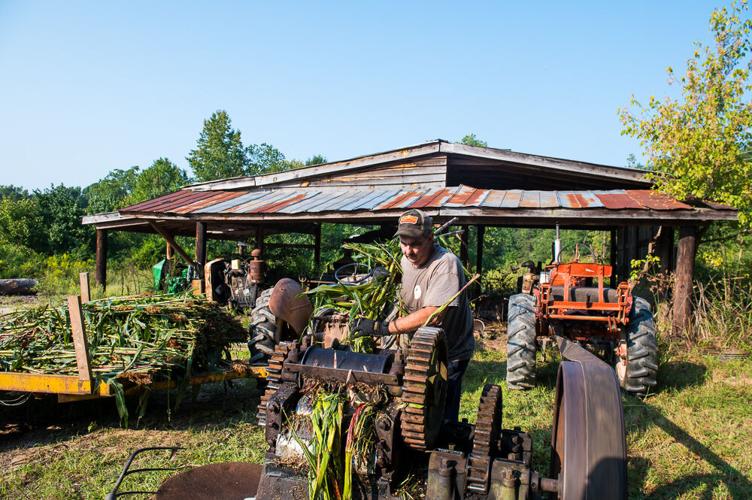 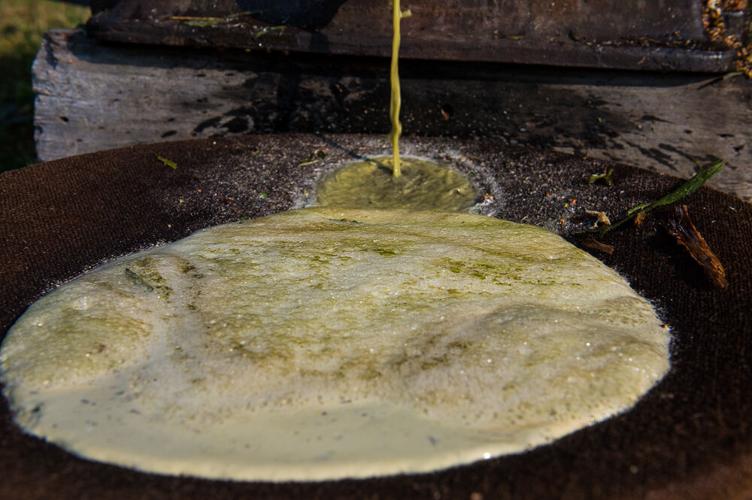 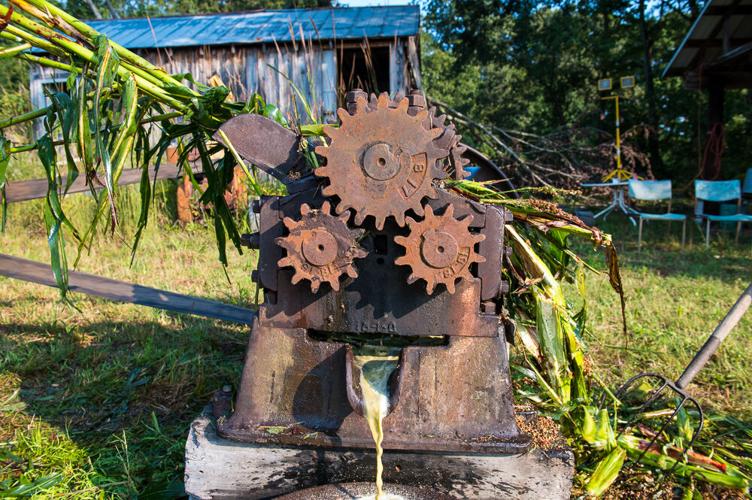 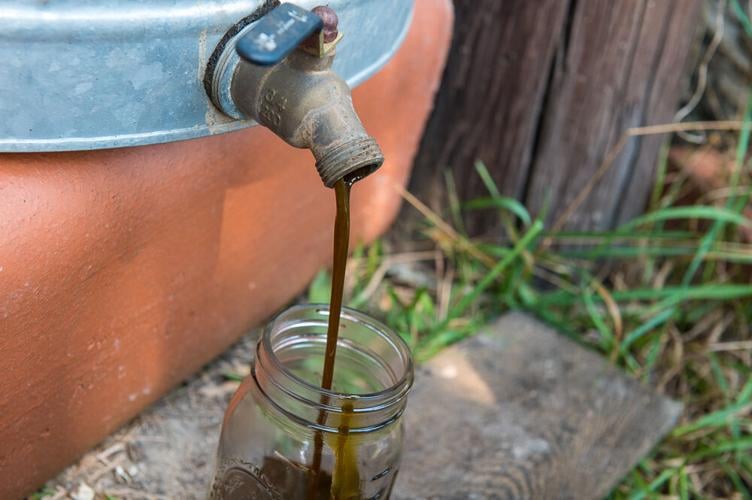 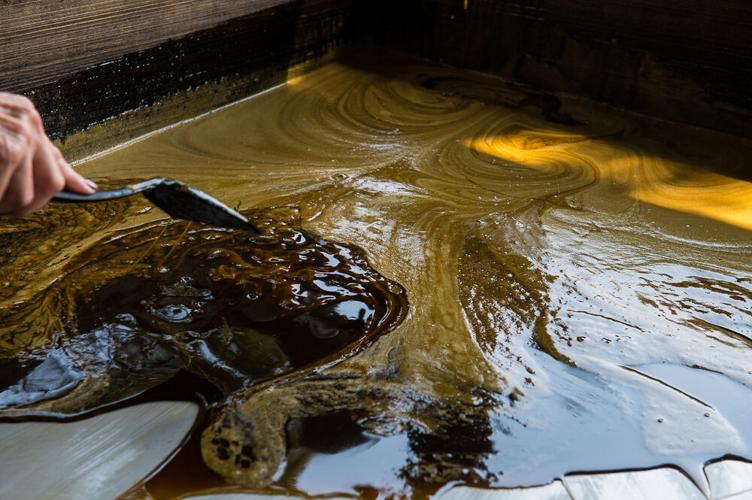 LINCOLNTON – Attending a sorghum syrup “making” is like taking a step back in time. The smell of pine wood burning fills the air. After the sap is pressed from the sorghum stalks, members of the extended Ellis family take turns stirring and skimming to remove any debris as the sap cooks down in a massive vat.

The sap looks like something that you might find in a witch’s cauldron – dark, bubbly, and muddy green. Stick your finger in to taste and the flavor wins you over – almost. It is not quite as sweet as honey, but it doesn’t have the bitter after taste of black strap molasses. In this age of cane sugar, it is perhaps an acquired taste. You can taste the grassiness of summer, the North Carolina soil, sun, and rain. You can savor the localness of it.

The sorghum is planted like corn in the spring and is harvested in late summer, early fall. Once it’s reached full height, the leaves are stripped from the stalks and the seedheads removed before they are cut down and carried out of the field. The stalks are run through a press to express the sap.

While the sap is green and looks like wheatgrass juice, it is sweet. Over many hours, the sap is reduced and caramelized in a giant vat. While it’s cooking, it’s constantly stirred and skimmed. When it’s completely reduced, it’s a caramel brown in color. At that point, it’s filtered one more time and bottled.

It’s an extremely labor-intensive process during a time of the year when it’s often still hot. It’s perhaps a little easier now. The older Ellis men, Wayne and Bud remember when the press was run by mule power and the stalks were cut by hand. Today these processes are powered by a tractor.

“It’s not a money-making venture,” Rick Ellis said. “We do it to keep the tradition alive. I’m not aware of anybody in the general vicinity who’s still doing this. In the late 1930s and 40s, this used to be the sweetener that we used.”

While sorghum syrup is often referred to as molasses, it isn’t. Molasses is the by-product of processing sugar cane into sugar.

Sorghum syrup was at one time important source of income in the southern states. The tradition has all but vanished due to the easy availability of cane sugar and its derivatives.

Members of the Ellis family have been producing sorghum syrup for the past 85 years. Even though they are well into their senior years, Ellis’ father and uncle still take part in the syrup processing as do Rick’s wife, Audra, her immediate family and their children. Sometimes neighbors even come by to help.

“We had a man who lived down the street from us who’d buy a case from the first run we did,” Audra Ellis said. “He’d mail them to his buddies.”

Once a promising experimental crop, when the Civil War disrupted the flow of Louisiana and Florida sugar to the North in 1861 and after the summer of 1868, to the South as well, sorghum served in its stead. The growing and processing of sweet sorghum waned in the late nineteenth century. Production peaked at about 30 million gallons in the 1880s and declined after that. Up until the mid-1970s, sorghum was still produced in the southern states, mostly on small farms. In 1975, the Agricultural Census reported only 2,400 acres of sorghum producing less than 400,000 gallons of syrup. There has been a recovery from this low production with 25,000 to 30,000 acres planted for syrup today.

Unlike sugar, there is some nutritional benefit to sorghum syrup which contains magnesium, potassium, calcium, iron, and sodium. Highly processed white sugar is completely stripped of all nutrients.

Sorghum syrup can be used just like molasses or any other sweetener. Never run out of brown sugar again – just mix a cup of white sugar with two tablespoons (more or less) of sorghum syrup. Perhaps the most known way of using it is to mix it with butter and slather it on a hot biscuit. There was a time that every kitchen across the south had a jar of sorghum syrup sitting next to a basket of biscuits.

To purchase a jar of sorghum syrup, Ellis Farm attends the Denver Farmer’s Market most Saturdays, or they can be reached via their Facebook page.